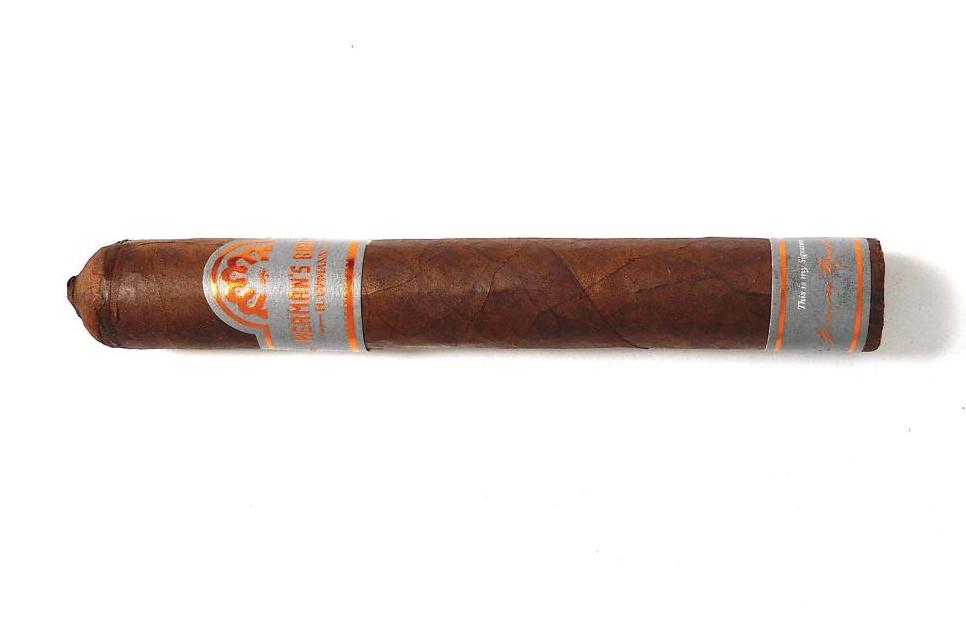 If one looks at the most active brands in the Altadis U.S.A. portfolio, it’s the H. Upmann brand that stands out. The brand was founded in 1844 by Hermann Upmann and in 2019, the brand commemorated its 175th anniversary. Since a 175th anniversary doesn’t come around all that often, there were several releases that hit the market from Altadis U.S.A. with the H. Upmann name. Late in 2019, Altadis announced yet another release that paid homage to the roots of the brand called Herman’s Batch, referring to brand founder Hermann Upmann (the extra “n” was dropped in the final name). Today we take a closer look at the H. Upmann Herman’s Batch in the Toro size.

The H. Upmann has its origins back in Cuba where founder Hermann Upmann opened his first cigar factory in 1844. Upmann was a German banker who in 1844 went to Havana Cuba and invested in a cigar factory – which became the H. Upmann brand. The company went bankrupt in 1922 and the name (and production) was eventually acquired by Menendez y Garcia Co. – the company that made Montecristo. The Cuban Revolution led to the nationalization of Cuban cigar companies – including H. Upmann. As a result of this, Menendez and Garcia would move the brand to the Canary Islands, then to the Dominican Republic. The brand would eventually come under the ownership of Altadis. This is why there is a Cuban H. Upmann and a Dominican H. Upmann.

Over the years, Altadis has had several releases paying homage to Upmann (most notably The Banker and Ingot releases). Herman’s Batch is the first release that uses Upmann’s first name.

Without further ado, let’s break down the H. Upmann Herman’s Batch Toro and see what this cigar brings to the table.

The blend for the H. Upmann Herman’s Batch consists of a (dark) Ecuadorian Habano over Dominican and Nicaraguan tobaccos. Production is handled at the world-famous Tabacalera de Garcia factory in the Dominican Republic.

The H. Upmann Herman’s Batch is available in four sizes. Each is presented in 20-count boxes. 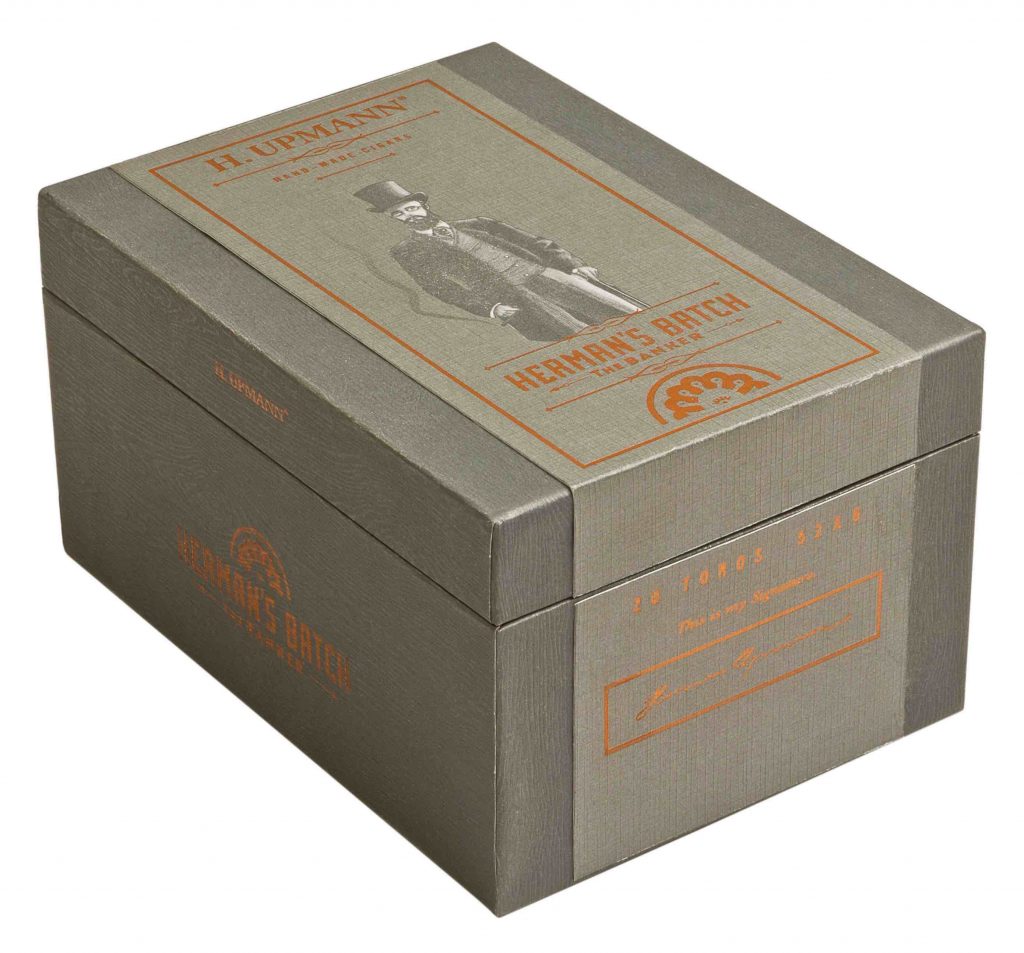 As mentioned above, the H. Upmann Herman’s Batch Toro had a dark Ecuadorian Habano wrapper. The wrapper had pretty much a cocoa-brown color to it. There was some mottling present on the surface of the wrapper. This wasn’t a very oily wrapper and it had more of a silky complexion to it. There were some visible veins and visible wrapper seams that gave the cigar a slightly rugged look (that was somewhat softened by the elegantly designed bands). The cap was finished with a thick pig-tail.

The secondary band rests on the footer. It has a simulated signature of Hermann Upmann in copper font. Just above it is the text “THIS IS MY SIGNATURE” in a smaller white font. The band also had a thick copper stripe near the top and bottom.

As opposed to pulling the pig-tail off the H. Upmann Herman’s Batch Toro, a straight cut was used to remove both the cap and the pig-tail simultaneously. From that point, it was on to the pre-light draw stage. The cold draw delivered a mix of cocoa, citrus, and a slight brown pepper note. Overall this was a satisfactory pre-light draw. At this point it was time to remove the footer band of the Herman’s Batch Toro, toast up the foot, and move into the smoking phase.

The H. Upmann Herman’s Batch started out with more notes of cocoa, citrus, and brown pepper. There was also an element of natural tobacco present. Early on the cocoa notes took the edge as the primary note. The citrus, natural tobacco, and brown sugar settled in the background. These secondary notes were joined by some red pepper. Meanwhile there was a combination of cedar and brown sugar present on the retro-hale.

By the midway point of the first third, the natural tobacco notes displaced the cocoa notes as the primary note. The natural tobacco exhibited both sweet and bitter qualities. The cocoa joined the citrus, brown sugar, and red pepper notes. During this phase the brown sugar diminished while the red pepper increased. By the midway point the brown sugar had dissipated. At the same time some earthy notes emerged in the forefront. The retro-hale also changed, with black pepper now mixed with some of the cedar notes.

Just past the midway point of the overall smoking experience, the earth notes joined the natural tobacco notes in the forefront. The citrus note became the next most prominent note. This was rounded out by the notes of cocoa and red pepper. This is the way the Herman’s Batch Toro came to a close. The resulting nub was cool in temperature and soft to the touch.

The burn to the H. Upmann Herman’s Batch Toro started out quite well, but as the cigar experience progressed this was a cigar that needed more and more touch-ups to maintain a straight burn path and straight burn line. The salt and pepper colored ash also started out on the firm side, but later in the cigar experience, it became looser and flakier. The burn temperature was ideal, but it was a slow burning cigar (each cigar took an average of 1 hour and 54 minutes to smoke). The slower burn rate didn’t result in any adverse effects (except if you wanted a quick smoke). 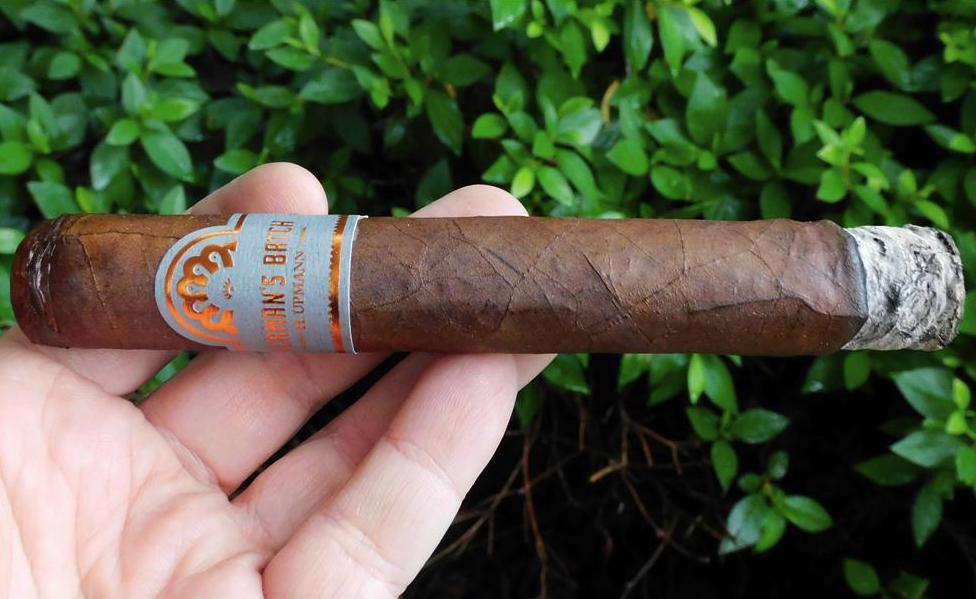 I like a little resistance on the draw, but in the case of the Herman’s Batch Toro, I found it to be tighter than I prefer. There was a point where the burn did go out. It’s safe to say that the tighter draw is what led to the slower burn rate.

Throughout the smoking experience, when it came to strength versus body, the body had the edge.

Overall, when it came to flavor and complexity, I was quite pleased with the H. Upmann Herman’s Batch Toro. This cigar didn’t have a flavor profile like your typical H. Upmann, but that is something I was fine with. Even though it’s not a very bold smoke, Herman’s Batch has a profile that can appeal to the contemporary cigar smoker. However, when looking at the overall performance of the cigar, the Herman’s Batch did have some shortcomings – namely around burn and draw, and that took the score down in terms of merit to an 88. When it came to the value rating, I’m inclined to go on the conservative side and advise trying a sample first. While I’m inclined to still recommend this cigar, at $10.50 you may want to sample it to make sure you get the maximum in terms of flavor and overall performance before investing further.