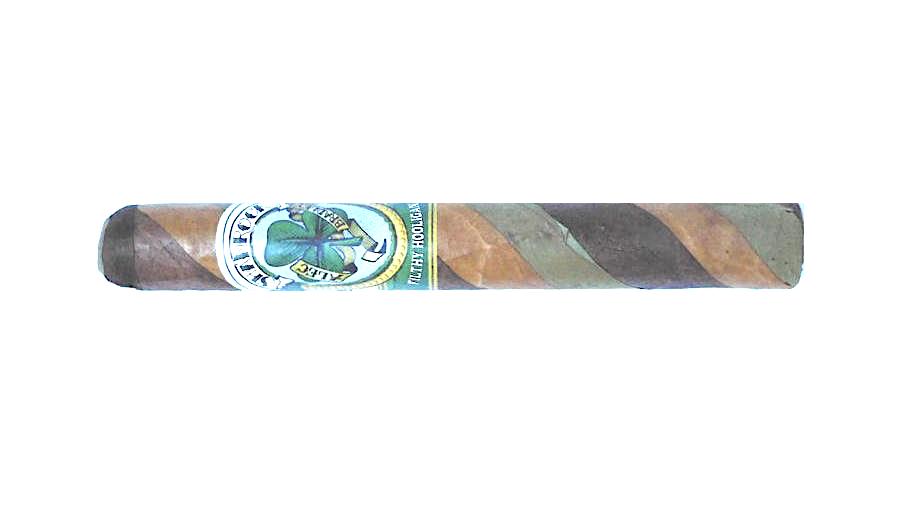 Without further ado, let’s break down the Alec Bradley Black Market Filthy Hooligan Shamrock 2020 edition and see what this cigar brings to the table.

The three wrappers of the Alec Bradley Black Market Filthy Hooligan Shamrock are arranged (top down): Candela, Maduro, and Natural (with a candela cap). There were clean seams between each of the wrappers. There wasn’t much in the way of oil on the surface. There were a few visible veins on the wrappers.

The band to the Shamrock had a gray background on the upper two-thirds. The center of the band has a slightly darker gray background with a large green shamrock on it. There is a yellow-ribbon design draping over the shamrock with the text “ALEC BRADLEY” in dark font on it. Above the shamrock is a large white-ribbon design with the text “SHAMROCK” in green font. The remainder of the upper portion of the band has additional green shamrocks and green adornments. The far right has a charcoal Alec Bradley “AB” badge.

The lower portion of the band is green with gold trim with a black pinstripe on it. On the green background is the text “FILTHY HOOLIGAN” in white font.

A straight cut was used to remove the cap of the Alec Bradley Black Market Filthy Hooligan Shamrock. Since a candela leaf was used to make the cap, it made it quite easy to clip the cap off. After removing the cap, it was on to the pre-light draw. The dry draw delivered notes of cream, earth, and a slight amount of bitter grass. The bitterness was not too overwhelming and overall this was a satisfactory pre-light draw. At this point, it was time to light up the Alec Bradley Black Market Filthy Hooligan Shamrock and see what the smoking phase would have in store.

The Alec Bradley Black Market Filthy Hooligan Shamrock started out with notes of grass, citrus, cream, coffee, and mushroom. Early on the cream notes moved to the forefront with the coffee and grass notes alternated in and out of the forefront. Meanwhile, the citrus and mushroom notes settled in the background. There also was a layer of red pepper and citrus on the retro-hale.

During the second third, the citrus and grass notes moved into the forefront. The cream notes receded into the background with the coffee and mushroom notes. By the midway point, some black pepper emerged on the tongue. This black pepper slowly increased as the cigar experience progressed.

The last third saw the citrus and grass notes remain primary. The pepper notes closed in on the forefront, but didn’t quite reach that threshold. There still were notes of coffee and mushroom notes and the cream notes had dissipated. This is the way the Filthy Hooligan Shamrock came to a close. The resulting nub was slightly soft to the touch and cool in temperature.

The Alec Bradley Black Market Filthy Hooligan Shamrock did require some touch-ups along the way to maintain a straight burn path. The resulting ash had a silver-gray color. This was an ash that was skewed toward the firmer side. The burn rate and burn temperature were both ideal. 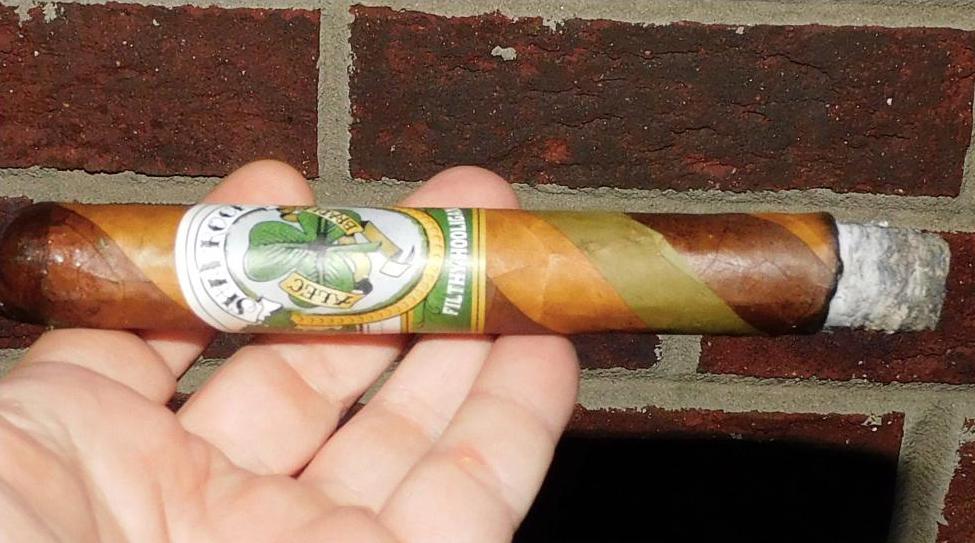 The draw to the Alec Bradley Black Market Filthy Hooligan Shamrock was on the open side. Normally I like a little more resistance on the draw, but this draw was not loose. Most importantly, there was no problem deriving flavor from this cigar.

In terms of strength versus body with the Shamrock, the body maintained the edge from start to finish.

I prefer the original Alec Bradley Filthy Hooligans that featured the all-candela wrapper to the barber-pole releases. As a result, I wasn’t sure what to expect with the tri-wrapper barber-pole Shamrock. In addition, I hadn’t smoked the 2019 Shamrock, so this review cycle was my first experience with the Shamrock. I was quite pleased with this cigar. It had just enough candela, but also showcased the other flavors. The flavor transitions as one wrapper became more pre-dominant really shined.

This is a cigar that I could recommend to any cigar enthusiast. If you aren’t a huge candela fan, you might be surprised by what the Shamrock can offer. As for myself, this is a cigar I would smoke and purchase again. I look forward to the 2021 edition of this cigar.