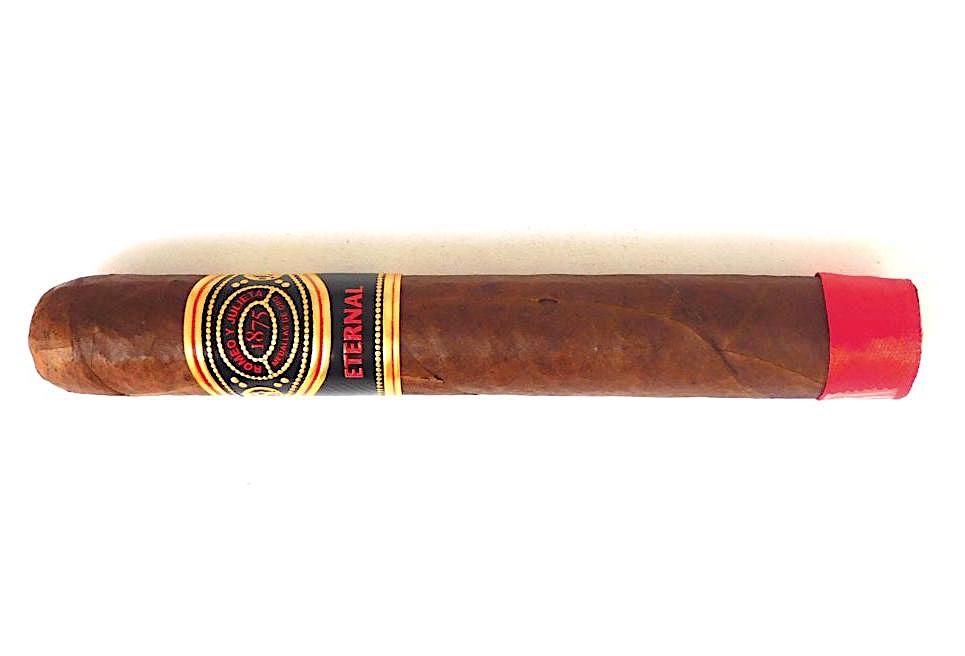 2020 was a big year for two of Altadis’ iconic brands. Montecristo celebrated its 85th anniversary and Romeo y Julieta celebrated its 145th anniversary. The COVID-19 pandemic and associated supply-chain problems made it a challenge to get commemorative releases into the market in time. Altadis worked with AJ Fernandez to develop the Montecristo 1935 Anniversary Nicaragua, a regular production line and Romeo y Julieta worked with Plasencia for a limited edition cigar called the Eternal. Both of these releases came late in 2020 and for all practical purposes hit the market in 2021. Both were produced in Nicaragua. Today we turn our attention to the Romeo y Julieta Eternal.

The Romeo y Julieta brand is one that has been primarily produced in the Dominican Republic at Tabacalera and Honduras at Flor de Copan. These are both factories that are a part of Altadis. Romeo y Julieta has also produced several releases in Nicaragua. These have been done by two manufacturing partners – Plasencia and AJ Fernandez. For completeness, here is a look a the Romeo y Julieta national releases (shop exclusives not included) that have been produced in Nicaragua for Altadis USA’s parent company Tabacalera USA which includes Santa Clara Cigars as well as Altadis USA.

In addition to being produced in Nicaragua, the Romeo y Julieta Eternal features 100% Nicaraguan tobaccos. The wrapper is double fermented and has been aged 26 months. As mentioned above, the Eternal is produced at the Plasencia factory in Nicaragua.

The Romeo y Julieta Eternal is offered in one size – a 54 x 6 Toro. The cigars are presented in eleven-count boxes. One of the cigars in the box contains a special golden ring and secondary band. According to Tabacalera USA Director of Product Capability Rafael Nodal, “Eternal’s golden ring symbolizes the strong bond between aficionados and Romeo y Julieta and the everlasting love of the iconic star-crossed lovers.”

The Nicaraguan wrapper of the Romeo y Julieta Eternal had a dark Colorado color to it. On the surface of the wrapper, there was some oil. While there were some visible veins and thin visible wrapper seams, this was a wrapper that was relatively smooth. 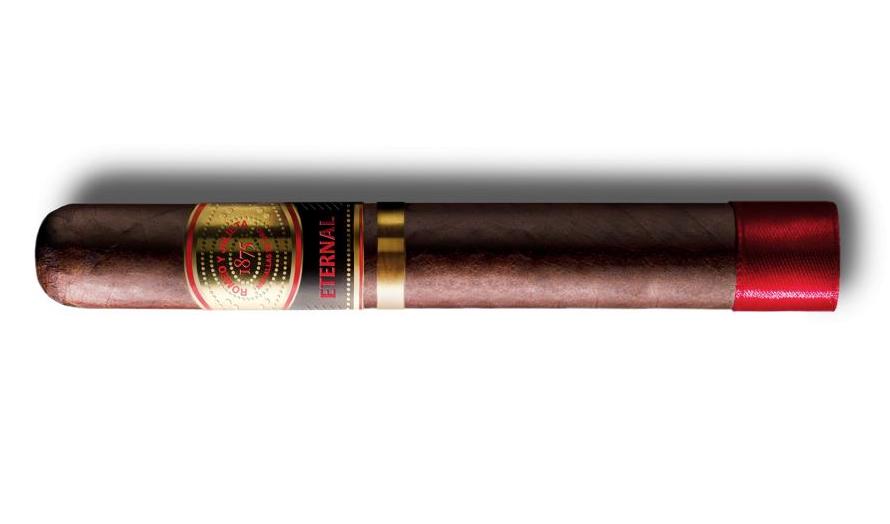 The “gold ring” cigar has a similar design but the upper portion of the band has a gold background. There also is a special gold secondary ring on this cigar.

A straight cut was used to remove the cap of the Romeo y Julieta Eternal. Once the cap was removed, it was on to the pre-light draw. The cold draw delivered notes of natural tobacco, cedar, and a slight floral note. Overall this was a satisfactory pre-light draw experience. At this point, it was time to remove the ribbon from the footer, toast up the Romeo y Julieta Eternal and see what the smoking experience would have in store.

There wasn’t much change in the last third. The natural tobacco notes remained primary. The pepper and earth notes were close secondary notes while the wood and cedar were slightly further back. This is the way the Romeo y Julieta Eternal came to a close. The resulting nub was slightly soft to the touch and cool in temperature. 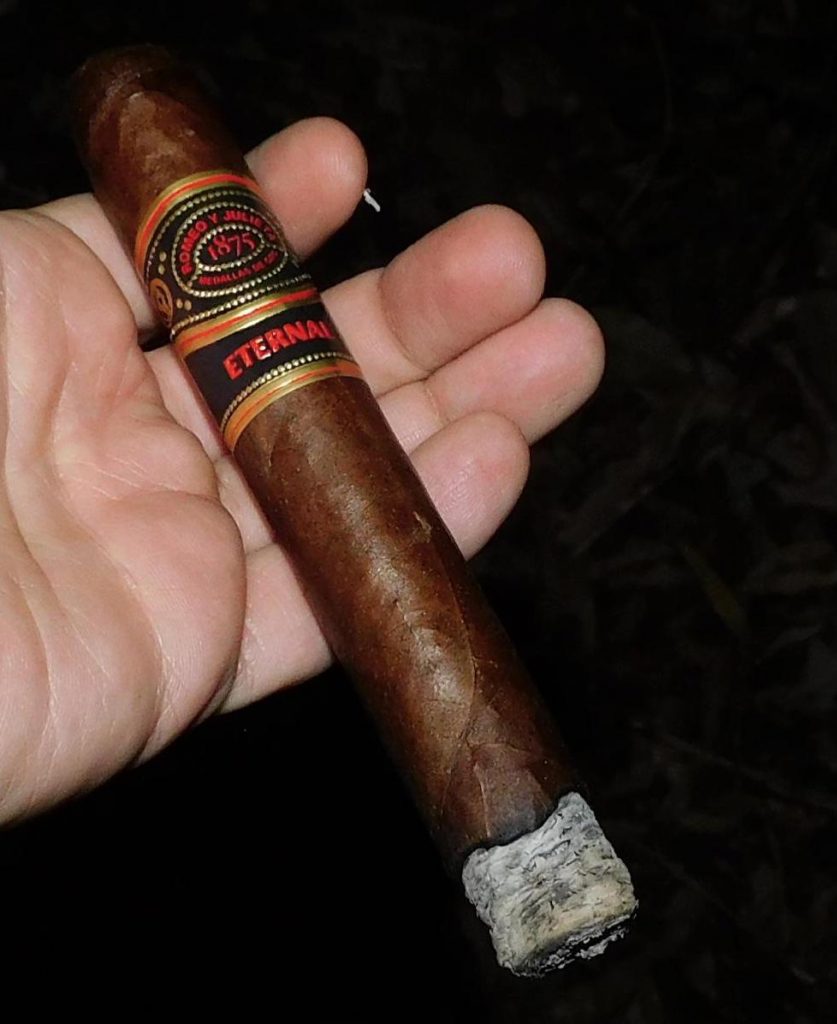 The burn of the Romeo y Julieta Eternal also performed quite well. This draw had a slight resistance to it which is something that I consider to be a positive. At the same time, this was a low maintenance cigar to derive flavor from.

The Romeo y Julieta Eternal delivered a medium strength, medium-bodied smoking experience from start to finish. There wasn’t much in the way of variance in the intensity levels of the strength and body. Both the strength and body balanced each other nicely with neither attribute overshadowing the other.

One side note – I loved the black and gold banding on this Romeo y Julieta. While it doesn’t factor into the score or rating, this is one of the best presentations I’ve seen from Altadis under the Romeo y Julieta brand.

In terms of the Romeo y Julieta Eternal, it keeps to a very classic profile – and one that I would say fits very well in the profile of the Romeo y Julieta brand. The cigar has excellent construction and good flavor. The issue I have is I’m not sure there was a lot that stood out to make this a limited edition that is a “must have.” In the end,there still is enough going on with this cigar where I would make a recommendation to any cigar enthusiast. As for myself, it’s a cigar that I still would buy and smoke again.