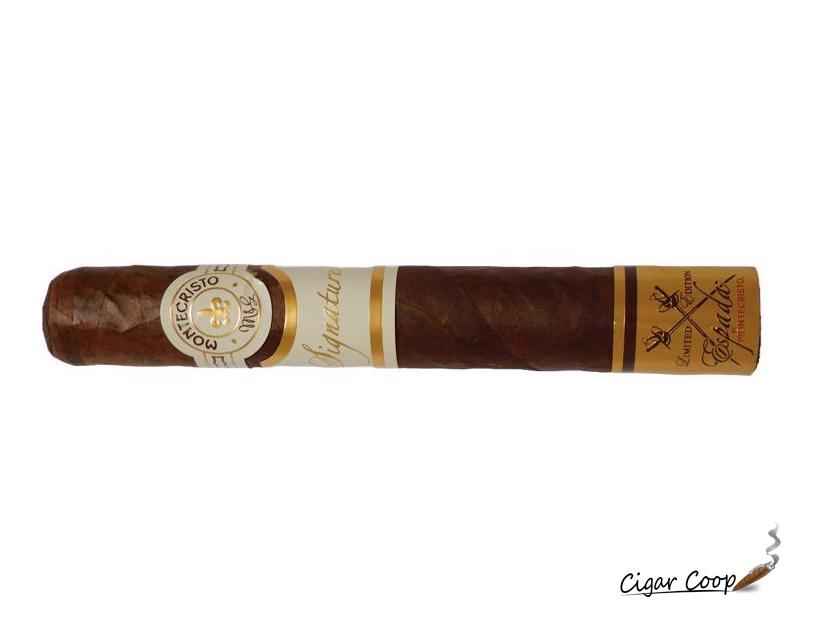 While Montecristo is a brand that is well known for its Cuban roots, it is a brand that over the years has been one of the pillars of Altadis U.S.A. For many years the production of the brand was in the Dominican Republic, but things would change in 2014 when Altadis decided to produce a line under the Montecristo line called Espada by Montecristo. Historically, it was an important cigar in that it was the first Montecristo cigar to come out of Nicaragua, and for Altadis, it was one of their first major releases produced by an outside factory which in this case was the Plasencia factory. In addition, the Espada would also be the first Montecristo to use all Nicaraguan tobaccos. Since then Altadis has worked with both Plasencia and AJ Fernandez to develop not only Nicaraguan-made Montecristo cigars but Nicaraguan-made cigars for other Altadis lines. The Espada line has been one that has remained with Plasencia, and there have been several offshoots since then. Late in 2021, Altadis announced a new limited edition offering known as the Espada by Montecristo Signature. This is the cigar we will take a closer look at today.

Like the other projects done with Plasencia, the Espada by Montecristo Signature was done in collaboration with Rafael Nodal and the Grupo de Maestros. The following are the Montecristo lines that have been produced at the Plasencia factory.

Without further ado, let’s break down the Espada by Montecristo Signature Valiente and see what this cigar brings to the table.

The cigar comes in one size – a 55 x 6 Toro known as Valiente. The cigars are presented in ten-count boxes. 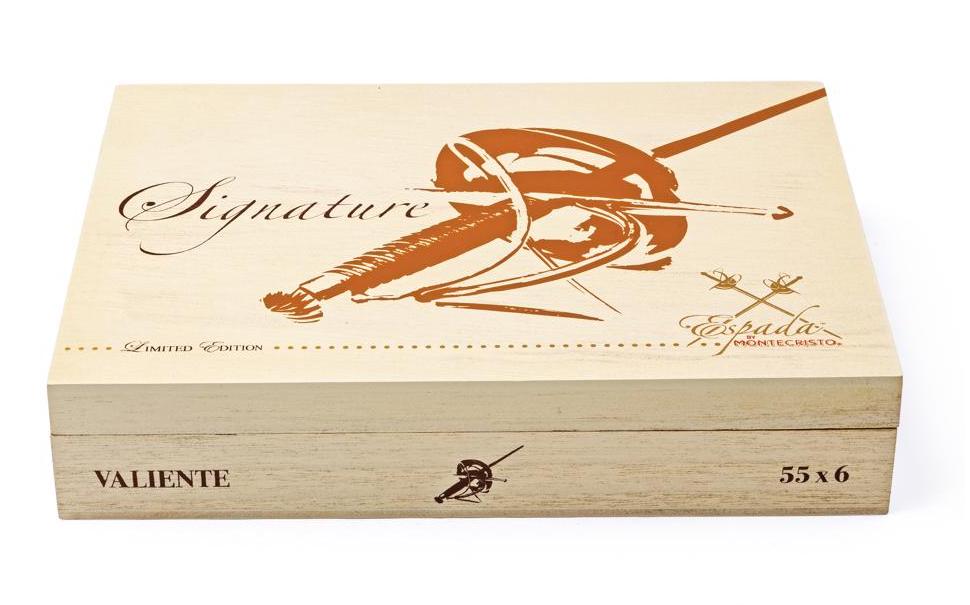 Packaging of the Espada by Montecristo Signature Valiente

The Nicaraguan Habano Rosado Oscuro of the Espada by Montecristo Signature looks exactly as described. It is a dark rosado wrapper that has dark cinnamon color to it. There was a light coating of oil on the surface. While the surface of the wrapper was somewhat bumpy, it still had an elegance to it. There were also some visible veins and wrapper seams on the surface.

There are three bands on the Espada by Montecristo Signature. The primary band is a variation of the standard Montecristo band featuring an antique white background and the signature fleur-de-lis in gold. Two concentric gold circles surround the fleur-de-lis. The text “MONTECRISTO” is in brown font above the inner circular field. The Montecristo initials are below the inner circle in a brown font. There are four pinstripes moving outward to the left and right with the middle pinstripes having a “wave” like effect (the inner ones are brown, the outer ones are gold).

The secondary band is also white with metallic gold font. On the center of the band is the text “Signature” in gold cursive font. The upper edge has a gold-colored trim. There is also gold trim near the lower edge of the band.

Finally, there is also a footer band. This band is metallic gold with mostly brown font. It features crossed swords with “LIMITED EDITION” flanked across. Also draped across the swords is the text “Espada” in brown cursive font. Just below that cursive text is the text “MONTECRISTO” in red font.

Prior to lighting up the Espada by Montecristo Signature, a straight cut was used to remove the cap. Once the cap was removed, it was on to the pre-light draw. The cold draw delivered a mix of natural tobacco, cedar, and earth notes. While this wasn’t the most exciting pre-light draw, it does not impact the final score or value rating since this not part of computing those assessment ratings. At this point, it was time to remove the footer band, toast up the Espada by Montecristo Signature and see what the smoking phase would have in store.

The Espada by Montecristo Signature opened up with notes of mixed pepper, natural tobacco, earth, and hay. Early on there was no dominant note, but eventually, the natural tobacco crept to the front and became the primary note. The pepper, earth, and hay notes settled in the background. Meanwhile, there was an additional layer of red pepper that was present on the retro-hale.

The second third of the Espada by Montecristo Signature saw the natural tobacco increase in presence. The flavors became richer and by the midway point, this was the dominant note. Moving into the second third, the hay and pepper notes both increased in intensity. These notes, along with the earth still were very much secondary notes.

As the cigar progressed into the final third, the pepper notes closed in on the forefront. While the natural tobacco remained primary, the pepper was the most prominent of the secondary notes. At the same time, the cigar never evolved into a pepper bomb, there was still more spice. The hay and earth notes still remained in the more distant background. This is the way the Espada by Montecristo Signature came to a close. The resulting nub was soft to the touch and cool in temperature.

While the Espada by Montecristo Signature was able to keep a straight burn line and straight burn path, it required multiple touch-ups along the way to do so. The resulting ash was silver-gray with some darker spots. This was an ash that was on the firmer side. As for the burn rate and burn temperature, both maintained ideal levels throughout the smoking experience. 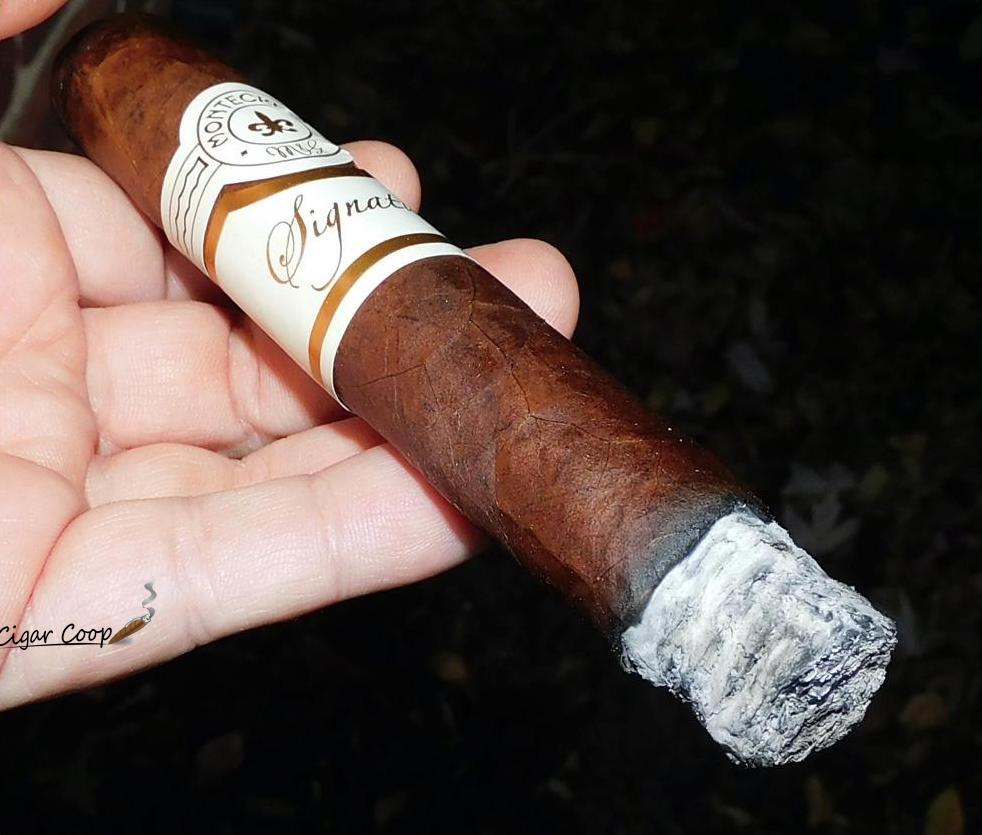 Burn of the Espada by Montecristo Signature Valiente

The draw of the Espada by Montecristo Signature was on the open side. Normally I prefer a little more resistance on the draw. At the same time, there were no adverse effects from the open draw.

From start to finish, the Espada by Montecristo Signature delivered a medium-strength, medium-bodied smoking experience from start to finish. There wasn’t much variance in the intensity levels of both attributes. Both the strength and body balanced each other with neither attribute overshadowing the other.

While I didn’t find this the most complex of smokes, I did find the Espada by Montecristo Signature produced some nice flavors. The medium strength and medium body make this an approachable cigar to almost every cigar enthusiast. On the other hand, it was a cigar that really lacked a wow factor. The original Espada, Estoque, and Espada Oscuro releases have all delivered better all-around smoking experiences. While the Signature is a good cigar, it does rank behind the other Espada releases. In the end, I’m inclined to reach for those other Espada releases before the Signature. In the end, it scores a very respectable 88, but I’m inclined to say try a sample first with this one.