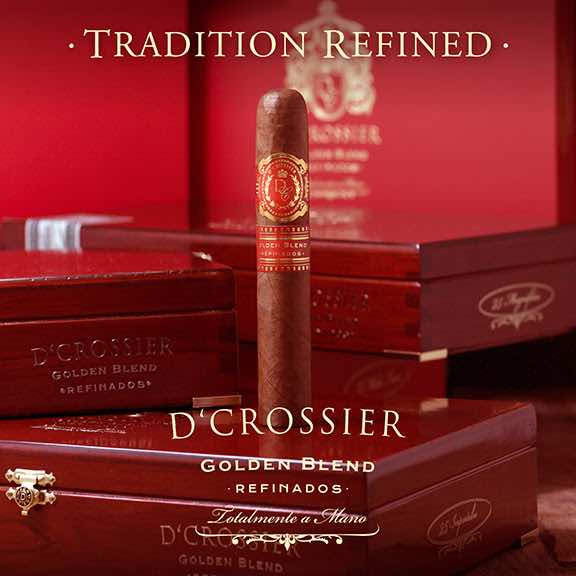 Pure Aroma Cigars has announced a new installment of the D’Crossier Golden Blend, the Refinados. Refinados is the Spanish word for “refined” and it refers to the stricter criteria being used to create this cigar.

The Golden Blend is considered to be the flagship blend for Pure Aroma Cigars. It was originally launched in 2009 and it strives to create the highest levels of quality. The D’Crossier Golden Blend Refinados is the fourth installment of this series. Previous editions include the original Golden Blend, Golden Blend Aged 10 Years, and the Golden Blend Reserva.

Pure Aroma Cigars owner and founder Isaias Santana Diaz said in a press release announcing the installment that perfecting the Golden Blend is the pursuit of his lifetime, “it is a dream cigar with sufficient time to age and rolled with the best tobaccos in the world.”

For production, Diaz worked with Andres Leon of Tabacos de Costa Rica in Puriscal, Costa Rica. The blend features an aged Colorado Habano wrapper from Ecuador. The wrapper was triple fermented over a ten-month period and then given one year of aging in Spanish cedar boxes.

The remainder of the blend for the Golden Blend Refinados features Nicaraguan and Dominican fillers that have been aged five years. It is being released in three sizes: Magnificos (52 x 5 1/2, $23.00 MSRP), Imperiales (56 x 6, $24.00 MSRP), and Wide Toro (58 x 5 1/2, $25.00 MSRP). Each is presented in 25-count individually numbered Spanish Cedar boxes.  The boxes will also feature a serial number imprinted on a golden hologram sticker placed on the bottom.

Pure Aroma says each cigar is checked and weighed individually to ensure proper draw and quality of construction. The cigars are triple-capped and made with the entubar method. Each cigar is individually cellophaned and barcoded. The company uses its signature breathable cellophane that has been punched on the head of the cigar to ensure proper aging and respiration.