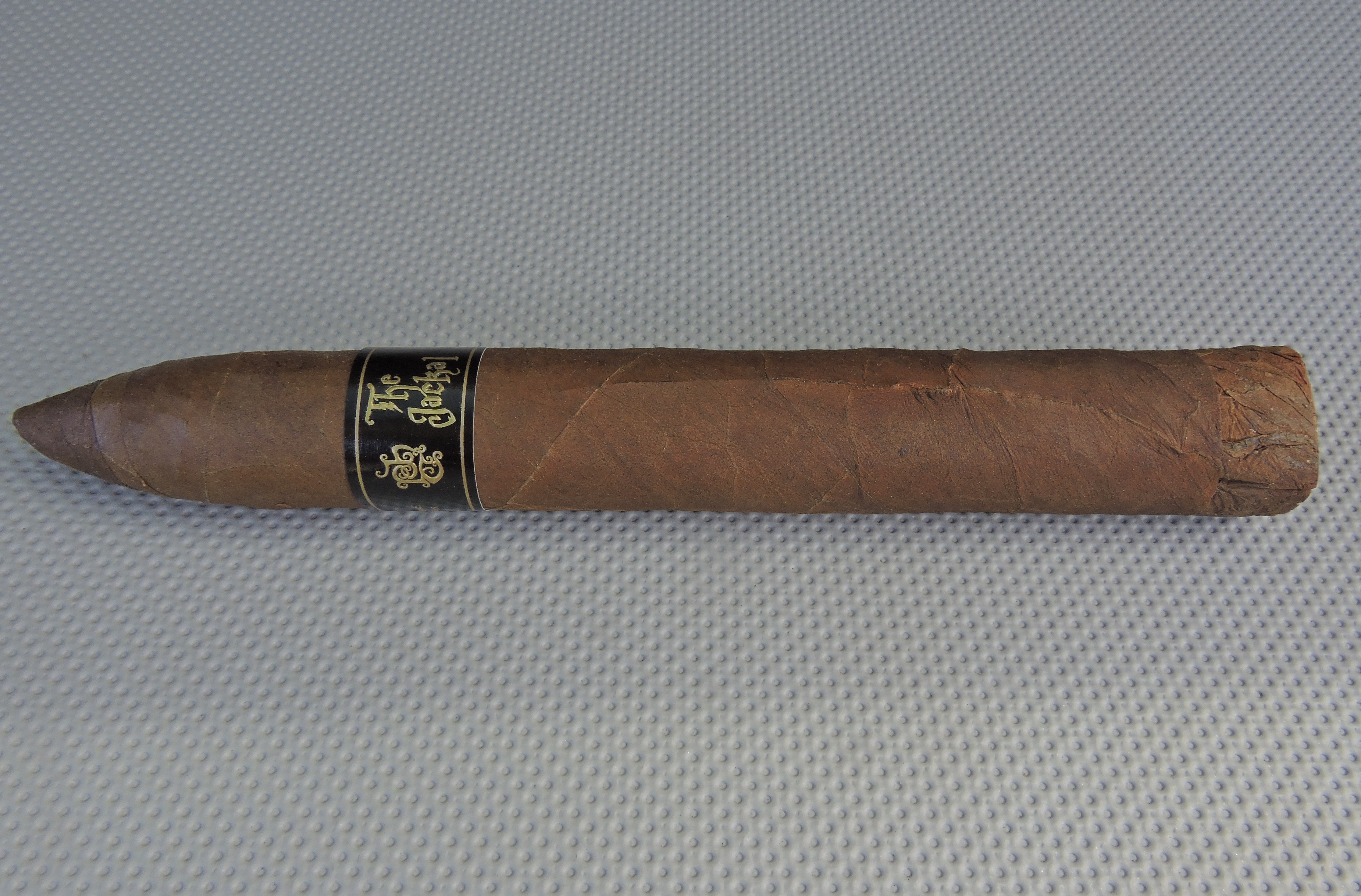 Tatuaje – The Jackal is a limited edition shop exclusive cigar to Chicago, Illinois area based retailer Casa de Montecristo. 2015 has been a major year for shop exclusive releases for Tatuaje as Pete Johnson’s company has release six different ones. The Jackal is perhaps the most unique one as it utilizse the Sancti Spirius wrapper. The Sancti Spiritus wrapper is a wrapper that is a staple of Johnson’s other company, L’Atelier Imports. With Tatuaje, the only other cigar to use this wrapper was 2014’s Monster Series installment, the Tatuaje Jekyll. Recently I’ve had an opportunity to smoke Tatuaje – The Jackal. Over the years, Casa de Montecristo has been the recipient of some of the best shop exclusive cigars. With the Jackal, it belongs in the group of these elite releases. This is an excellent release by Tatuaje – and it is one that should please many Tatuaje enthusiasts.

The Jackal is best associated with Ancient Egypt. During this time, the Jackal was a sacred animal and looked upon as both a deity and protector. The animal itself is part of the canis breed which includes dogs, wolves, and coyotes.

According to Casa de Montecristo, The Jackal is a culimination of a three year effort to perfect the blend. The Sancti Spiritus wrapper was used as a starting point, then the filler tobaccos from the various Tatuaje Monster series releases were sampled. From there, the best combination of those fillers were chosen.

Without further ado, let’s take a closer look at Tatuaje – The Jackal and see what this cigar brings to the table.

The Sancti Spiritus wrapper first became known when L’Atelier Imports released its L’Atelier line. This a tobacco leaf grown by the Oliva family with a seed from the Garcia family. It is a hybrid of Criollo and Pelo de Oro and was designed as a replacement seed for Pelo de Oro. The wrapper itself has a strong resistance to mold.

The Jackal is made at the My Father Cigars factory in Esteli, Nicaragua

Tatuaje – The Jackal is will available in one size – a unfinished foot torpedo measuring 6 3/4 x 54. The design of the torpedo tip and the unfinished foot were specifically designed to represent the Egyptian Jackal.

The Jackal comes in ten count boxes. There is a total of 2,000 boxes produced. Casa de Montecristo has also made available the cigar in five count packs. 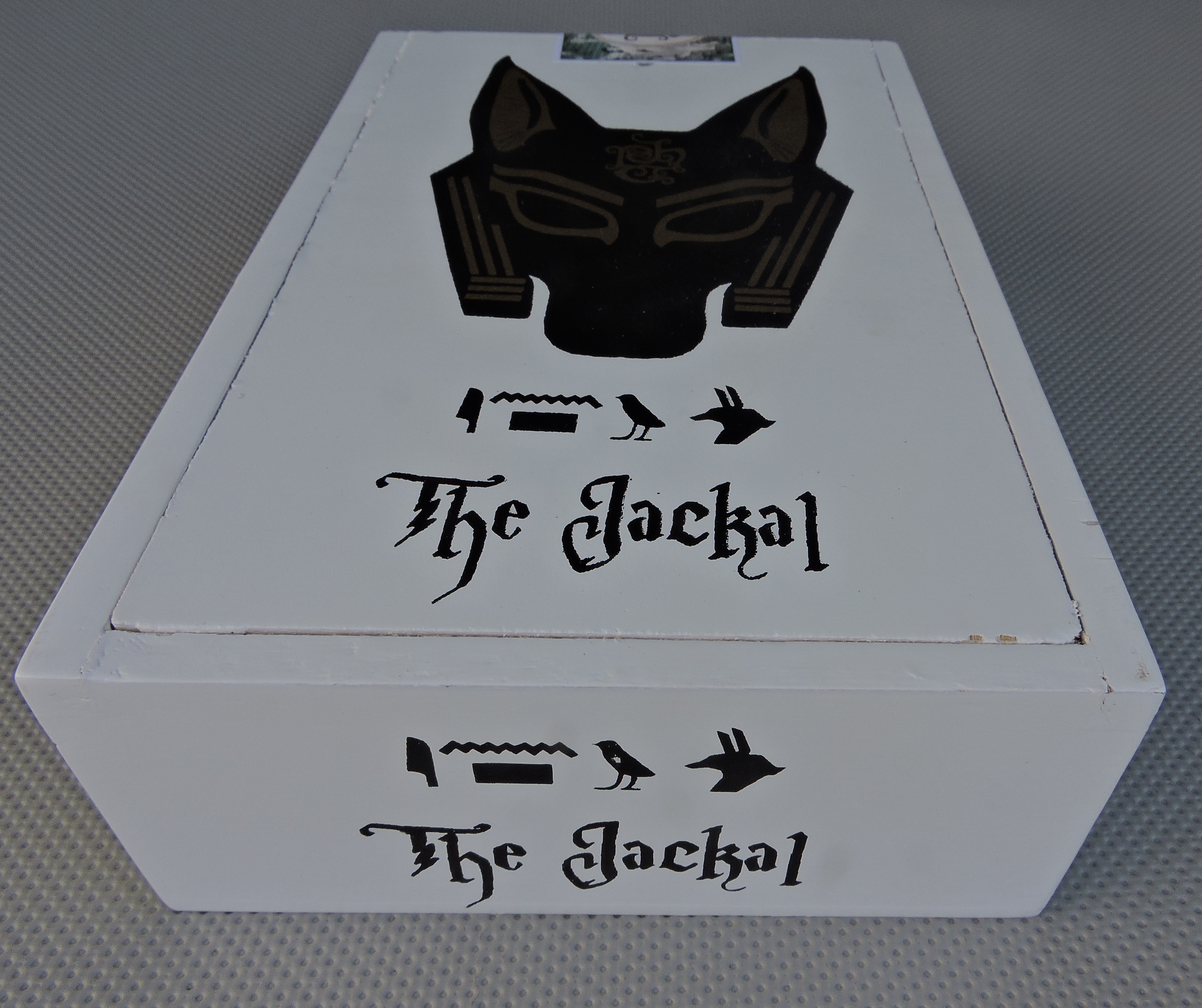 Packaging of Tatuaje – The Jackal

The Sancti Spiritus wrapper of The Jackal has almost a milk chocolate color to it. There is a nice oily sheen on the wrapper. There are some visible veins, but the wrapper seams are minimally visible. The footer is what I would categorize as an unfinished foot without wrapper as opposed to a brushed foot. The torpedo tip has a gentle taper to it.

The band is a unique one for a Tatuaje cigar. It is black in color with gold font. On the band is the text “The Jackal” in a gothic style font. To the left is the Tatuaje tattoo logo. To the right is the text “TATUAJE EXCLUSIVE SERIES”. There is a gold pinstripe on the upper and lower portion of the band.

Prior to lighting up The Jackal, I went with my usual selection of a straight cut.. I opted to use my Credo Special T cutter with the 36 ring gauge hole to get an ideal cut for this torpedo. After I clipped the tip, I moved on to the pre-light draw.  The dry draw delivered notes of chocolate along with slight floral and cedar notes. Overall I considered this to be an excellent pre-light draw. At this point I was ready to light up The Jackal and see what the smoking experience would have in store.

The unfinished footer section of The Jackal, provided a mix of chocolate and a sweetness that reminded me almost of a cotton candy variant. I also detected some cedar sweet-spice in the background. The cedar was also present on the retro-hale.

Once the cigar transitioned to the wrapper section, I found the flavor profile remained the same, but there was a nice creamy note in the background.

By the second half, the natural sweetness was joined by notes of earth and coffee. Meanwhile the spice component of the cedar began to increase and at times I could pick up some black pepper. The chocolate notes were now further in the background and the cream notes significantly diminished.

By the last third, I found the earth, coffee, and cedar notes in control. I also picked up some pepper notes. The chocolate and cream notes were not much of a factor. The last stages had a little bit of harshness at the end, but this was also a sign it was time to put this cigar down. There resulting nub was lukewarm in temperature and soft to the touch.

Overall I found the burn of the Jackel to be excellent. The cigar had a straight burn path and maintained a relatively sharp burn line from start to finish. When the cigar burned through the unfinished foot, I was surprised it didn’t require much maintenance in turns of touch-ups. This carried over for the remainder of the smoking experience. As for the ash, it was looser and slightly flaky when it burned through the unfinished foot, but once the cigar moved through the wrapped portion, the ash got firmer and tighter. The burn rate was ideal. The burn temperature remained ideal, but in the very late stages it was slightly lukewarm. 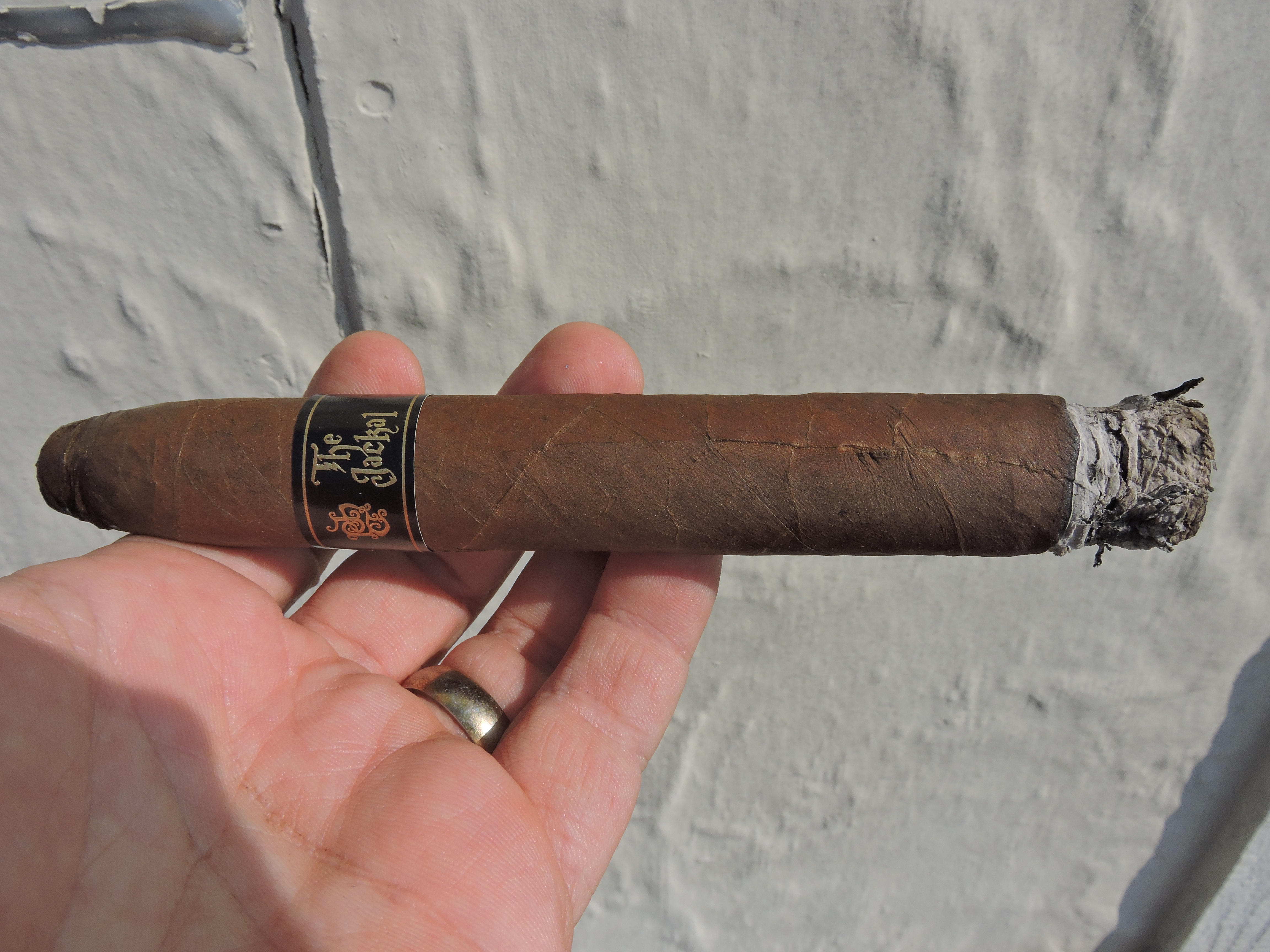 Burn of Tatuaje – The Jackal

I found the draw to be excellent – not loose nor tight. While normally I prefer the draw of a parejo to a figurado, I did find The Jackal drew fine. The tip didn’t get soft, and this was a low maintenance draw to derive flavors from.

From a strength perspective, I found The Jackal started off a solid medium. There was a slight increase in strength along the way, but I felt the strength level still remained in that medium range. As for the body, I found it to be medium to full. During the second half, I noticed the body had increased and by the final third, The Jackal was in full-bodied territory.  Throughout the smoking experience, I found when it came to strength versus body, the body had the edge.

This was a very impressive cigar by Tatuaje. It has an excellent flavor profile. It also has several nuances and transitions along the way delivering a nice amount of complexity. The only significant negative I had was some of the harshness I got toward the last stages. In the end, the positives far outweighed the minuses with this cigar. I’m not ready to make Sancti Spiritus to be the greatest thing since sliced bread, but I do believe Johnson and the My Father Cigars factory have blended very well with it – and The Jackal falls into that category.

As I mentioned up front, Tatuaje has done a lot of limited edition shop exclusive cigars, and this is one the Tatuaje fan is going to want to track down. While this is a cigar I’d still steer a more experienced cigar enthusiast to, I would not discourage a novice from trying this. As for myself, this is a box worthy cigar – and one that i would smoke.