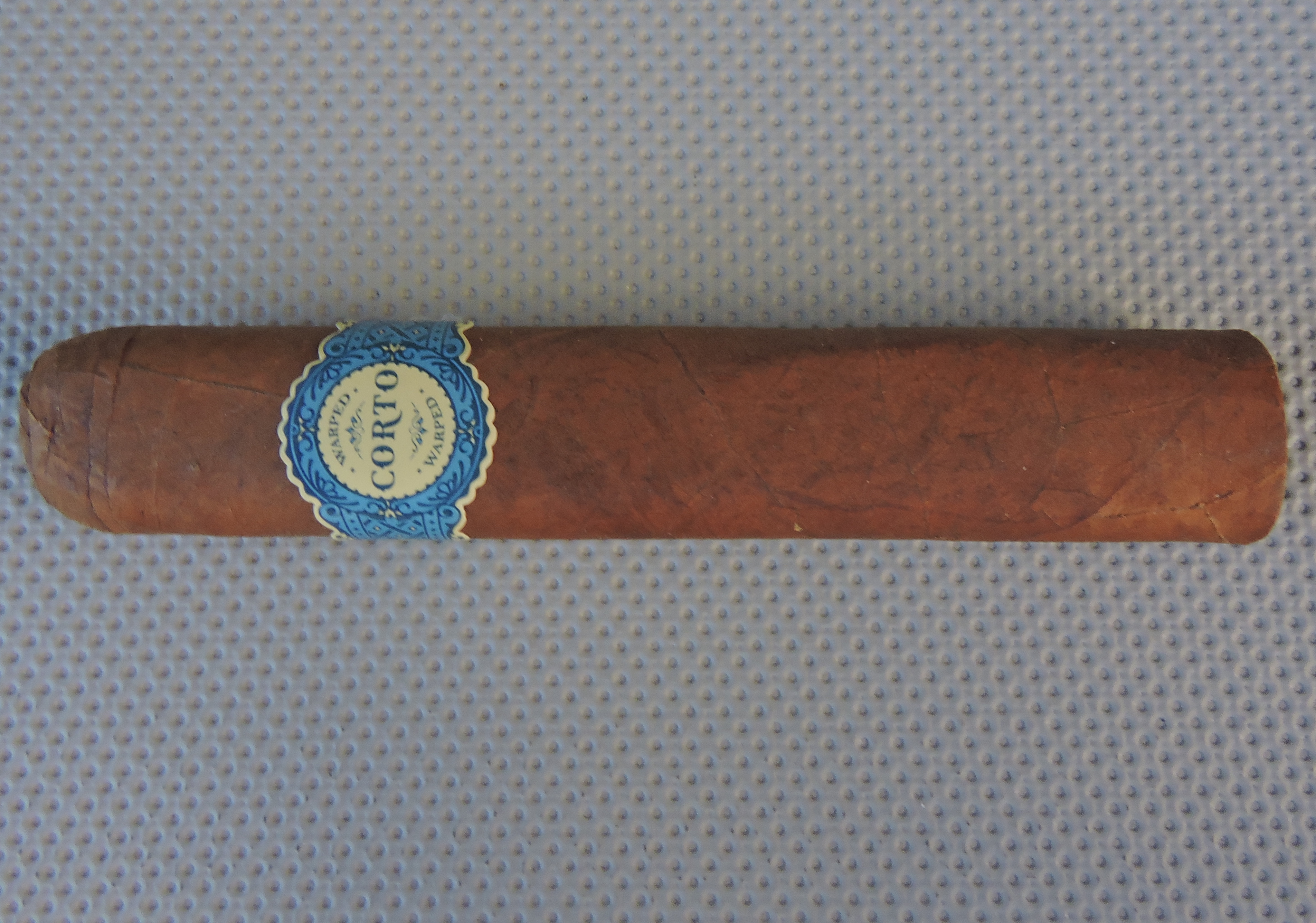 Just prior to the 2015 IPCPR Trade Show, Warped Cigars announced the Warped Corto line. Corto became the fourth line that Warped Cigars would produce at Casa Fernandez’s Tabacos Valle de Jalapa S.A. (TABSA) factory. The name Corto translates to “Short” and is described as the most “full-bodied” blend by Warped Cigars to date. Warped Cigars has said that the plan with the Corto line is to introduce a new vitola at each year’s IPCPR Trade Show and then retire the previous year’s vitola. Recently I’ve had a chance to smoke to smoke the first vitola in the Warped Coroto line, the X50. Overall I found this to be an excellent cigar. I also found this a cigar to live up to the expectations as being right up there as Warped’s fullest cigar to date.

As mentioned, the Warped Corto became Warped Cigars’ fourth line to be made at TABSA. In 2014, the company launched its first line out of that factory with Flor del Valle. This year, in addition to Corto, the company added La Hacienda and Futuro (the collaboration with Casa Fernandez). In addition to these lines, the company produces three additional lines (La Colmena, El Oso, and Don Reynaldo) out of El Titan de Bronze.

Without further ado, let’s take a closer look at the Warped Corto X50 and see what this cigar brings to the table.

The Warped Corto is a Nicaraguan puro consisting of entirely of Casa Fernandez’s signature Aganorsa tobacco.

The Warped Corto X50 is a 4 1/2 x 50 Cuban styled box-pressed vitola. This is the first box-pressed cigar to be released by Warped Cigars. The cigars are packaged in 25 count boxes.

The Nicaraguan wrapper of the Warped Corto X50 has a medium brown color with a rosado tint. Upon closer examination, there is some darker marbling that can be seen on the surface. There are some thin visible wrapper seams, but the cigar itself was almost void of any major visible veins. The box-press is Cuban-styled. This is a softer styled box-pressed with a slightly rounded look to it.

The band of the Warped Corto is has a blue, pale yellow, and black color scheme. On the center of the band is a pale yellow colored circle. Going across the center of the circle is the text “CORTO” in blue font. Above and below that text is the text “WARPED” arranged in a curved fashion in a blue colored font. A blue and black design pattern flanks the left and right side of the band. Sitting on that background on each side of the band is a small pale yellow colored circle with a blue colored design representing the initials “KG” (the initials of Warped Cigars founder Kyle Gellis).

Prior to lighting up the Warped Corto X50, I went with my usual selection of a straight cut to remove the cap. After successfully clipping the cap, I moved on to the pre-light draw. The cold draw delivered a mix of leather, earth, natural tobacco, and a slight grapefruit note. Overall I considered this pre-light draw to be very good, At this point I was ready to light up the X50 and see what the smoking phase would have in store.

The start to the Warped Corto X50 delivered a mix of natural tobacco, black pepper and a grapefruit-like sweetness. As the X50 moved through the early phases, the natural tobacco became the primary note and also developed a milk chocolate-like component. Meanwhile the black pepper was a secondary note, and the grapefruit became more distant.  The black pepper had a slight lingering effect on the after-draw and was also prominent on the retro-hale.

By the second half of the X50, the natural tobacco notes remained primary and the chocolate notes moved into the background. The grapefruit and pepper notes were also in the background, but by this stage I saw an increase in the spice. By this point the spice had morphed from a black pepper into more of an exotic-like spice.

By the last third, I found the exotic spice closed in on the natural tobacco notes. There still was a touch of grapefruit and chocolate left. This is the way the X50 came to a close. The resulting nub was cool in temperature, but slight soft to the touch.

From a burn perspective, I found the Warped Corto X50 performed quite well. The cigar maintained a straight burn path from start to finish. The actual burn line was somewhat irregular, but it was never in danger of canoeing or tunneling. This is a cigar that still didn’t require an excessive amount of touch-ups and most were needed for cosmetic purposes. The resulting ash was on the firm side and it had a nice salt and pepper color to it. The burn rate and burn temperature were both ideal. 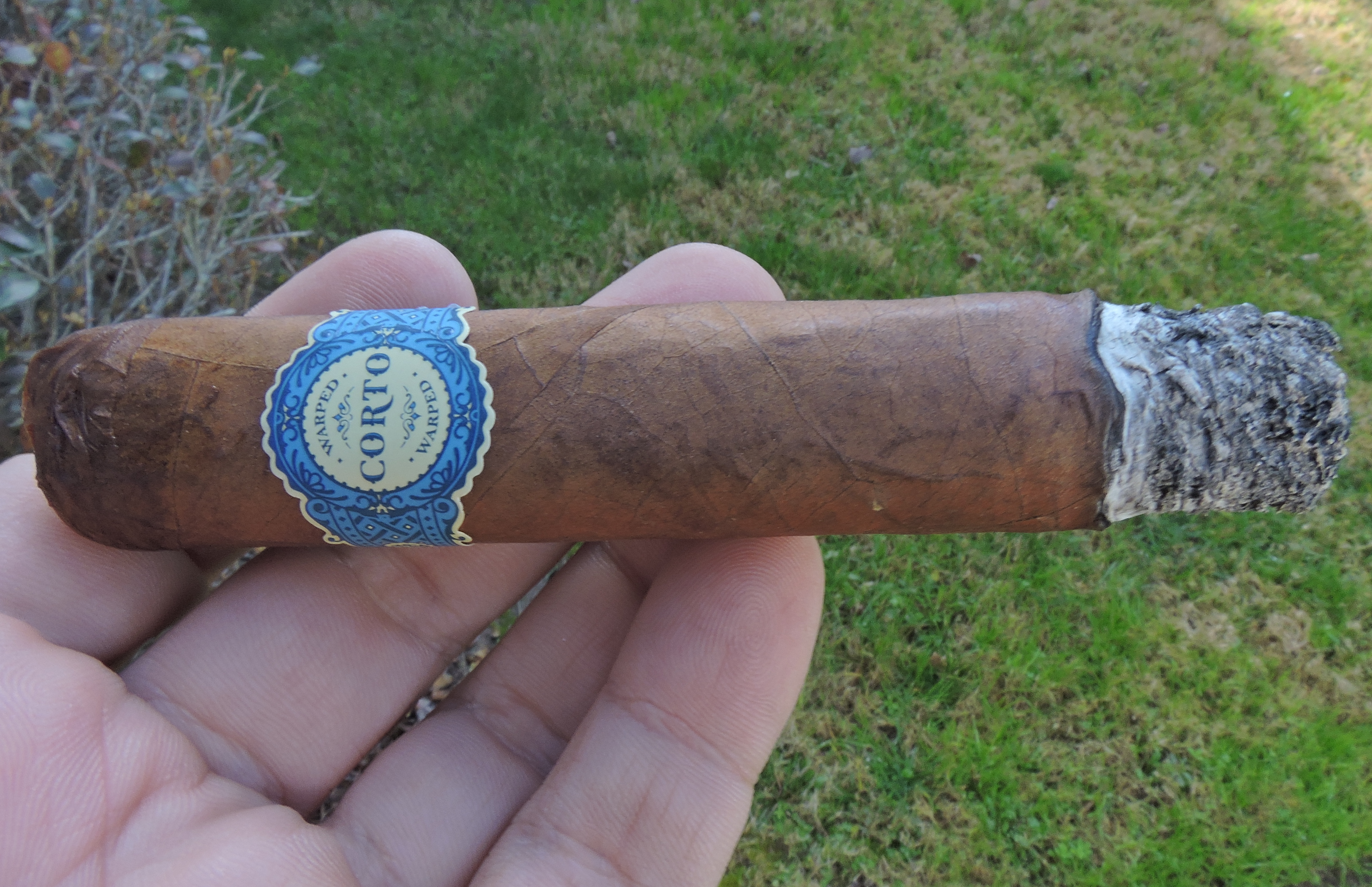 Burn of the Warped Corto X50

The draw to the Warped Corto X50 also performed quite well. It was on the open side, but not too loose. I did find there was a decent amount of smoke production from this cigar. Overall, this was a low maintenance and enjoyable cigar to puff on.

Strength and body-wise, I found the Warped Corto X50 to be one of the bolder cigars in Warped’s portfolio. Perhaps the only other one cigar from Warped I’d put in this category would be the Flor del Valle Sky Flower. With the X50, I found this cigar to be a medium to full strength cigar right out of the gate. I found a slight increase in intensity, but the cigar remained in the medium to full strength range right until the end. Meanwhile the X50 also starts out medium to full-bodied, but by the second half, I found this to be a full-bodied smoke.

As for strength versus body, I gave a slight edge to the body throughout most of the smoking experience.

With cigars out of Casa Fernandez factories, I have found these to be some of the best cigars to perform when it comes to aging potential. Over the past eight weeks, I’ve smoked several Warped Corto X50 cigars. This was a great cigar out of the box, but even in this short amount of time, this is a cigar that continues to get better. I also think this cigar has yet to peak, so the best may be yet to come.

The X50 definitely lived up to its reputation as being one of the bolder cigars out of Warped Cigars. Because it is fuller in terms of strength and body, it’s a cigar I’d recommend to a more experienced cigar enthusiast. As for myself, I found this to be an excellent cigar. It’s one I would smoke again and it’s one that is box worthy.