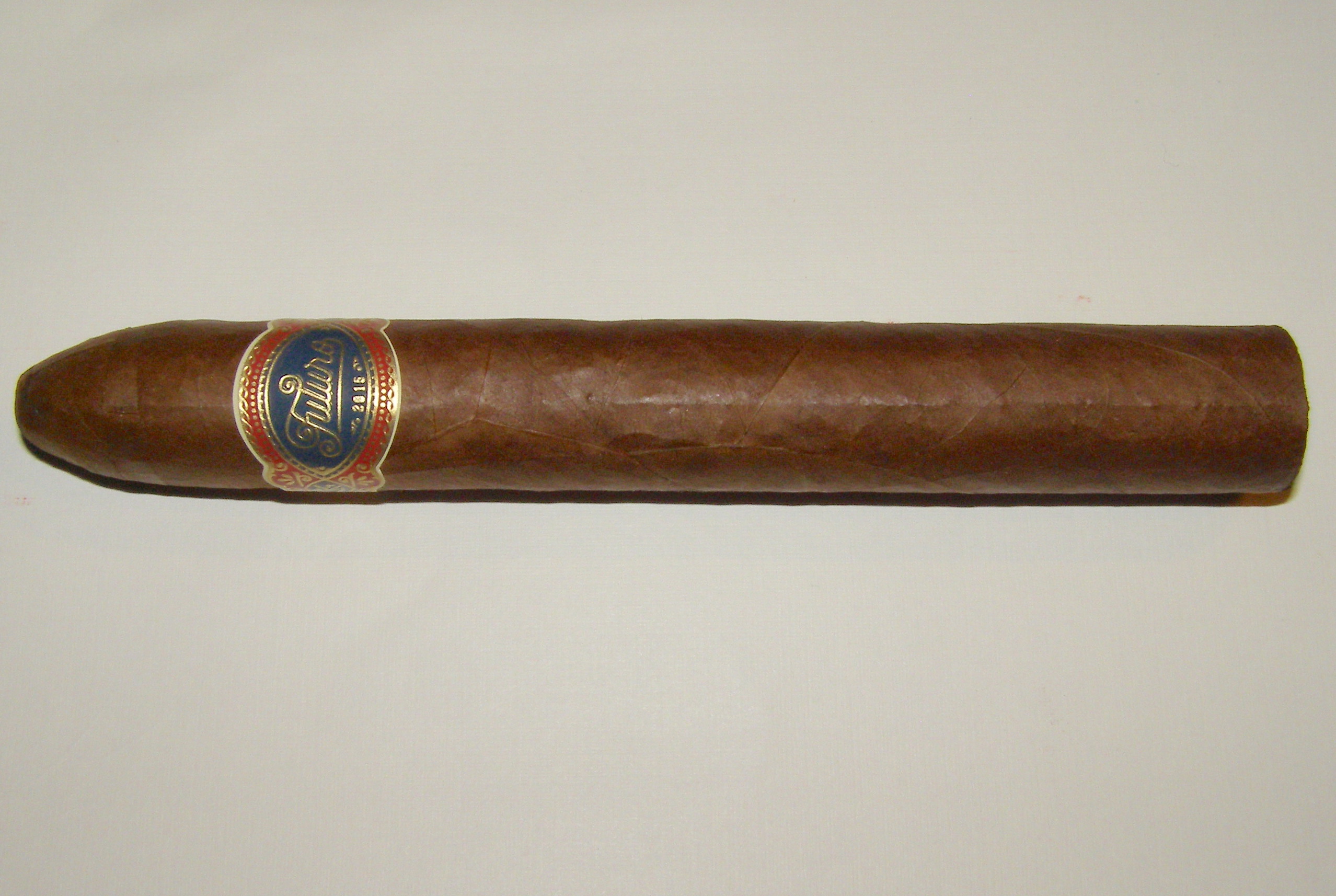 Earlier this year, Warped Cigars and Casa Fernandez announced a joint collaboration called Futuro. The project was a joint venture between two rising stars in the cigar industry, Kyle Gellis of Warped Cigars and Max Fernandez of Casa Fernandez. The collaboration could be considered as part of an organic process as Warped Cigars has been collaborating with Casa Fernandez’s Tabacos Valle de Jalapa S.A (TABSA) factory to produce several of its lines. As a part of this concept, both Gellis and Fernandez jointly developed a blend and then each produced a size to his own personal preference. Today we take a closer look at Fernandez’s vitola, the Futuro Seleccion 109 – featuring the 109 flat “bullet” cap in a belicoso format. Overall I found this collaboration to be an excellent one, and the Seleccion 109 format proved to be an excellent format for this blend.

Both Casa Fernandez and Warped Cigars each showcased the Futuro at their respective booths at the 2015 IPCPR Trade Show.  In addition to Futuro, Casa Fernandez is also producing the Flor del Valle, La Hacienda, and the limited edition Corto line for Warped Cigars.

Without further ado, let’s take a closer look at the Futuro Seleccion 109 and see what this cigar brings to the table.

The cigar is a mix of Corojo ’99 and Criollo ’98 tobaccos – two staple tobaccos from Casa Fernandez’s Aganorsa farms. The tobaccos come from a section at TABSA called the “vault” – which is a section of tobacco the Fernandez family keeps under lock and key and is home to some of its most prized tobacco.

There are currently two vitolas in the Futuro line. While Fernandez’s Seleccion 109 is a belicoso, Gellis opted to produce a Corona Gorda size known as Seleccion Suprema. Both vitolas are available in twenty count boxes with slide top lids. Production has been limited to 400 cigars per size.size.

One footnote, Gellis is not known to produce vitolas over a 50 ring gauge,  The Seleccion 109 is the largest ring gauge in offerings by Gellis.

The Nicaraguan Corojo 99 wrapper of the Futuro Seleccion 109 has a medium brown color with a strong rosado tint to it. There is a light coating of oil on the wrapper. There are some visible veins, but the wrapper seams are well hidden.  The belicoso tip is moderately sloped and features the signature flat “bullet” tip the 109 size is known for.

While the name of the cigar is “Futuro”, the banding very much has a classic and retro-look to it. The band is highlighted with a blue oval with the text “Futuro” in a gold colored retro-styled cursive font.  Just below that text is the text “2015” – also in gold font. The left side of the band features a gold colored design representing the initials “kg” (Kyle Gellis) on a rounded blue background. The right side of the band features a gold color design representing the initials “mf” on a rounded blue background.

Prior to lighting up the Futuro Seleccion 109, I used a straight cut to remove the tip of the cigar. As what is now becoming standard practice with me with belicoso-shaped cigars, I used my Credo Special T cutter with the 36 ring gauge hole to get an ideal cut for this figurado. Once the tip was removed, I moved on to the pre-light draw phase. The dry draw initially produced notes of leather and cedar. This was soon joined by notes of chocolate and a mixed fruit note. Overall, I considered the pre-light draw of the Futuro Seleccion 109 to be excellent. At this point I was ready to light up this cigar and see what the smoking experience would have in store.

The Futuro Seleccion 109 started out with plenty of flavors as I detected notes of creamy chocolate, mixed fruit, and a combination of black pepper, cedar, and cinnamon spice.  The black pepper and cedar was also prominent on the retro-hale. During the early stages the chocolate notes became primary with the fruit and spices as secondary notes.

Later in the first third of the Seleccion 109, I found the pepper, cedar, and cinnamon combination to start to float into the forefront from time to time joining the chocolate notes. Meanwhile the cinnamon was also present on the after-draw. The fruit sweetness remained in the background. This continued into to the midpoint of the cigar experience.

During the early stages of the second half, I found the spice combination to join the the chocolate notes in the forefront. The fruit notes continued to be a background flavor and the cinnamon remained present on the after-draw.

By the last third of the Seleccion 109, I found the trio of spices to be in control of this cigar. The chocolate notes occasionally popped into the forefront and the fruit sweetness was more subtle. This is the way the flavor profile remained until the end of the cigar experience. The resulting nub was excellent – firm to the touch and cool in temperature.

The Futuro Seleccion 109 is a well-constructed cigar and this reflects nicely in the score for the burn and draw attributes. The Seleccion 109 took a straight burn path from start to finish. The actual burn line remained relatively straight and did not require an excessive amount of touchups. The resulting ash was a light gray color.  As for the ash itself, it was on the firm side, but there was some minor flaking along the way. The combustion of the Futuro was excellent – maintaining an ideal burn rate and ideal burn temperature throughout the smoking experience. 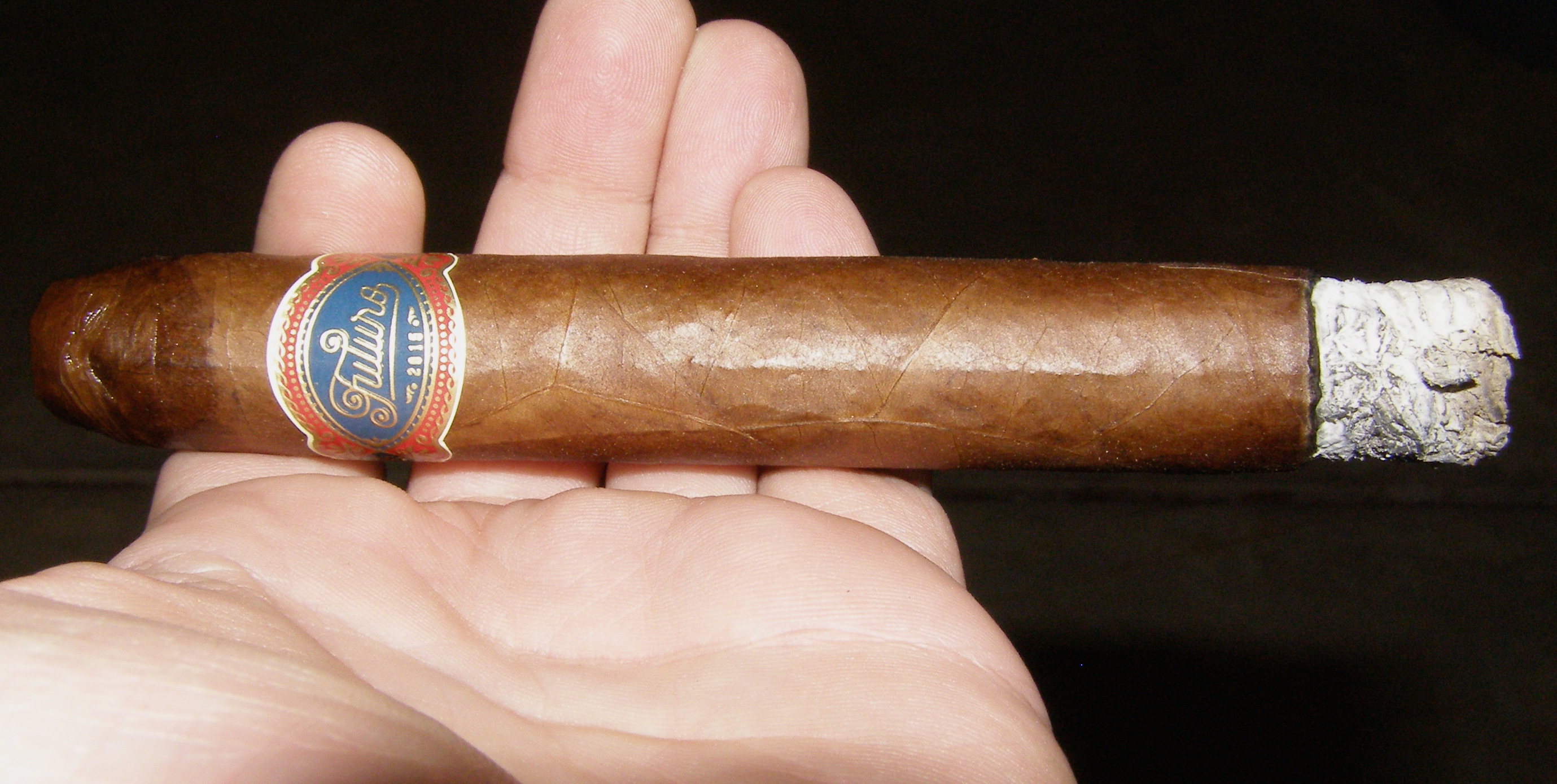 Burn of the Futuro Seleccion 109

The draw to the Futuro Seleccion 109 performed well. This was an open draw, but not a loose draw. The tip of the cigar where did not get soft as I puffed on this cigar.

In terms of strength and body, I found the Futuro Seleccion 109 to be a bolder cigar than I originally anticipated.

The strength came right out of the gate as medium to full and by the last third the Seleccion 109 was a full strength cigar. Meanwhile, when you factor in the retro-hale, I found the flavors of this cigar to have significant weight on the palate. I assessed the Seleccion 109 to be a full-bodied cigar from start to finish – and one that does slightly increase in body as the cigar experience progresses. Overall when it came to strength versus body, I found the body to have a slight edge.

In my book the Futuro Seleccion 109 is a winner. This is a cigar that really shines when it comes to complexity. There is plenty in the way of flavor nuances and flavor transitions. The belicoso format worked quite well with this blend. This is a cigar certainly ready to smoke out of the gate right now, but it is also one of those cigars that has some great long-term aging potential. This is a cigar I would recommend to a more experienced cigar enthusiast. As for myself, this is a cigar I’d smoke again. It’s a cigar that’s worthy of a multi-cigar purchase and picking up a fiver for my humidor.