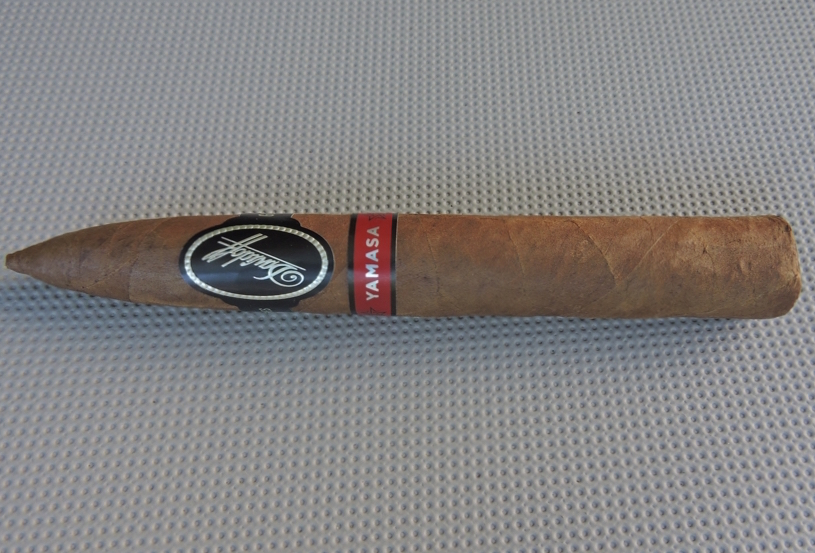 The theme of innovation in Davidoff Yamasa comes from where the region some of the tobaccos come from. Yamasa refers to a region in the Dominican Republic. It’s a place where many have tried to grow tobacco, but failed. However, Master Blender Henke Kelner saw something this land had to offer and decided to make a go of it. This involved making changes to the chemical composition of the soil. Most importantly, the acidity of the soil was reduced (from a pH of 5.5 to a pH of 6.5).  This was accomplished by adding calcium carbonate, agricultural lime and slaked lime/dolomitic lime at intervals of every two months, by hand and to each and every single tobacco plant once a month, before transplanting. While Davidoff’s site covers 100 hectares of land, only 21 are used at a time for each harvest in a rotating fashion.

From a group of 30 seeds, three were selected to grow. A shade grown process was used to protect the tobacco from the harmful effects of the sun. As for curing, new climate controlled processes were also constructed for this tobacco.

Yamasa region tobacco is nothing new to Davidoff. In fact, has been seen on several Davidoff releases. What follows below is is not an exhaustive list, but some of the premium releases seen by Davidoff over the past few years. While most of these are limited releases, it is worth noting that the recently discontinued regular production Puro d’Oro incorporated a Yamasa wrapper. With the case of Davidoff Yamasa, one can argue this marks the first time a brand is being built around the tobacco.

Without further ado, let’s take a closer look at the Davidoff Yamasa Piramides and see what this cigar brings to the table

The Yamasa tobacco is used for both the wrapper and the binder. In particular the binder is San Vincente grown in that region. Along with Dominican tobacco, there is also some Nicaraguan tobacco in the filler.

The Petit Churchill comes in 14 count boxes while the other 3 sizes come in 12 count boxes. All four sizes are also available in four packs. 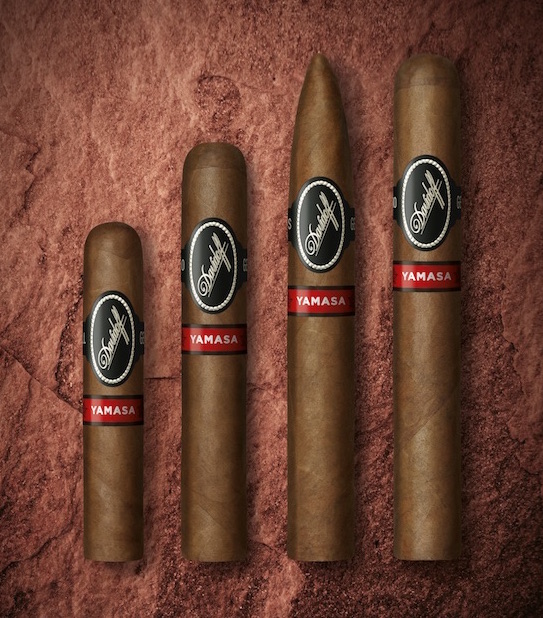 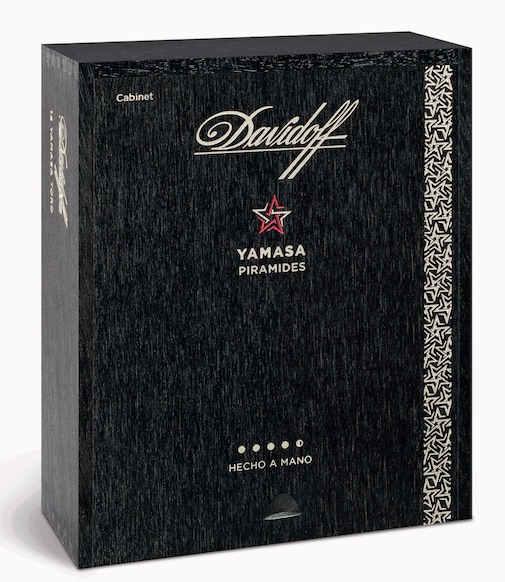 The wrapper of the Davidoff Yamasa Piramides had a medium brown color. Depending on how the light shines on it, the wrapper may look wood-like or cocoa-colored. Upon closer examination, there was some subtle darker marbling on the surface of the wrapper. The wrapper also had a thin coat of oil it. There were some thin visible veins and most of the wrapper seams were well hidden. Overall I found the wrapper to be on the smooth side. Meanwhile there was a very sharp taper on the cigar toward the tip.

The Davidoff Yamasa has two bands. The primary band uses the same band design as the rest of the Discovery Pillar cigars. This is a black and silver colored version of the Davidoff White Label design. The background is black with the font text and surrounding trim in silver. The Davidoff scripted logo is on the front. To the left of the logo is the text “PIRAMIDES”. (Note: each of the vitolas have text with the vitola name in this location). To the right is the text “GENÉVE” (on all of the vitolas).

There is a secondary band just below the primary black and silver Davidoff band. It is red colored with black trim. On the band it says “YAMASA” in silver font. To the left and right is the black Yamasa star logo.

Before lighting up the Davidoff Yamasa Piramides, I went with a straight cut. As I have being doing most of my figurados, I used my Credo Special T cutter with the 36 ring gauge hole to get an ideal cut for this perfecto. Once the tip was removed, I moved on to the pre-light draw phase. The dry draw delivered a mix of cocoa and earth as well a touch of citrus and spice. Overall I considered the pre-light draw to be satisfactory. At this point I was ready to light up the Davidoff Yamasa Piramides and see what the smoking phase would have in store.

The start to the Davidoff Yamasa Piramides delivered notes of wood, natural tobacco and slight amount of black pepper. Early on, the wood and natural tobacco notes became primary. While the black pepper was a distant background note on the tongue, it was quite prominent on the retro-hale.

As the flavor profile developed in the first third, the natural tobacco notes took on the form of a compound flavor note – namely the flavor had qualities of natural tobacco, lemon and chocolate. The wood notes diminished into the background and soon were replaced by a combination of straw and cedar notes. Meanwhile the black pepper remained in the far distant background where it faded in and out of the flavor profile.

During the second third of the Davidoff Yamasa Piramides, the natural tobacco sweetness took on less of the chocolate qualities, but maintained the lemon notes. The straw and cedar notes started to become more prominent as the cigar moved through this stage of the smoking experience.

By the last third, the natural tobacco shed most of the chocolate and lemon qualities. The straw notes were now pretty close to the forefront. The cedar maintained its presence in the background while the black pepper was further back. This the way the cigar experience of the Davidoff Yamasa Piramides came to a close. The resulting nub was firm to the touch and cool in temperature.

While the Davidoff Yamasa Piramides maintained a straight burn path, I did find the actual burn line to be somewhat jagged. While not a huge issue, this seemed to be more of an issue during the early stages, but it one that became less of an issue as the cigar experience progressed. This was a pattern I noticed each time I smoked the Piramides. As a result; early on, I did find this cigar needed some more touch-ups than I prefer – but during second half, this cigar was on cruise control. and didn’t require that much. The resulting ash had a light gray color. I found the ash to be firm and one that came off the cigar in clean chunks. Meanwhile the burn rate and burn temperature were ideal. 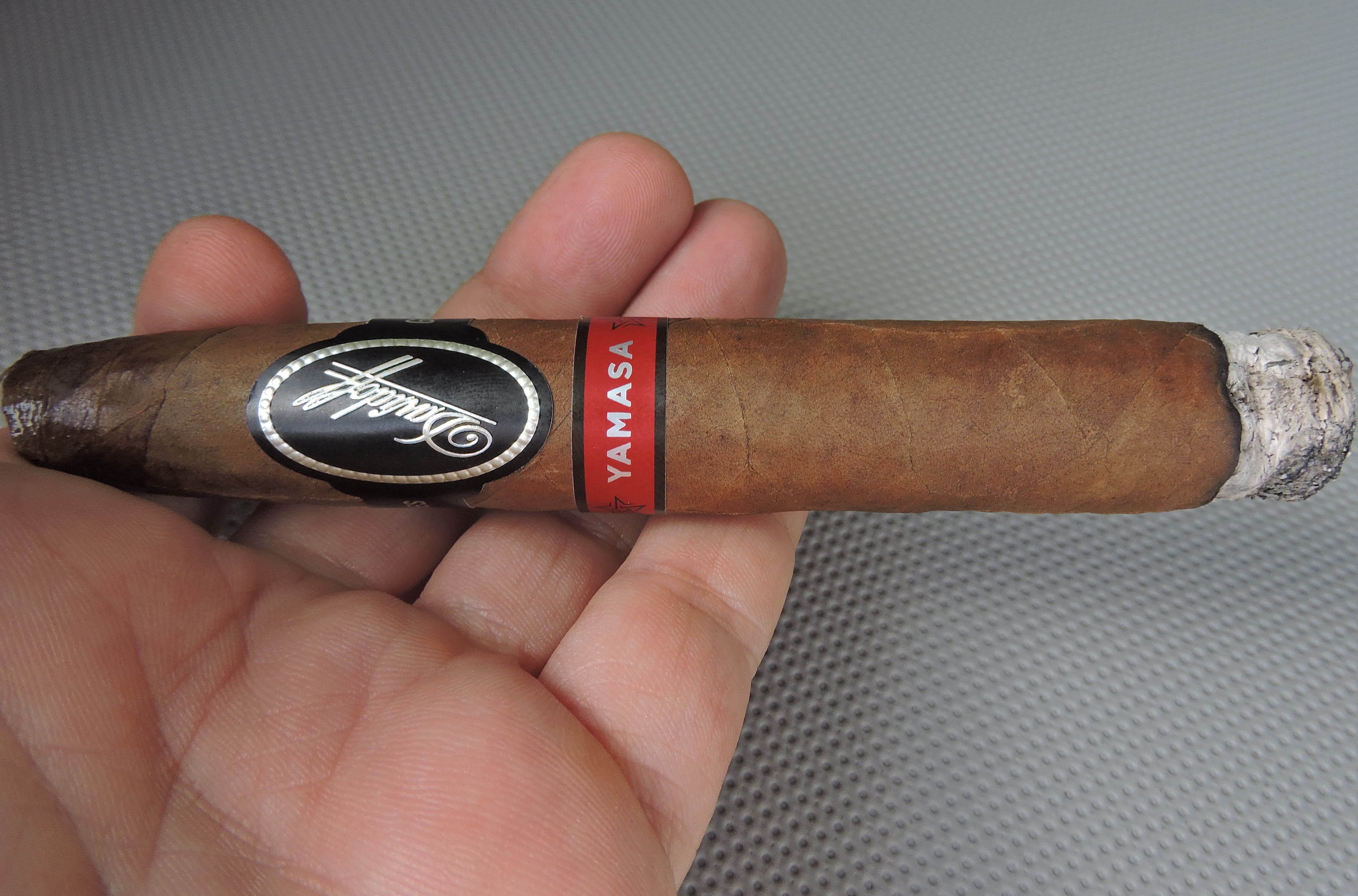 I found the draw of the Davidoff Yamasa Piramides to be ideal – not too close, nor too tight. Overall this was a low maintenance cigar to derive flavor from.

From a strength perspective, I found the Davidoff Yamasa Piramides to start out as classic medium – dead center in the middle of the strength spectrum. There was a gradual increase in strength throughout the smoking experience and by the last third, I found the strength crossed the threshold into medium to full territory.

Meanwhile the body started out medium to full-bodied. The body had even more of a gradual an increase along the way. While there was more body at the end of this cigar than the start, I still found the body to be in the medium to full range.

Over the years, I have felt Davidoff was doing something special with the use of the Yamasa tobacco in its various blends. The establishment of a full brand around this tobacco was a great next step. I first started smoking the Davidoff Yamasa vitolas about 2 months ago, and was impressed right out of the gate. Now with two months of rest in the humidor this is a cigar that is getting better and better. The Piramides vitola of the Davidoff Yamasa seems to be the size clicking with me right now. As stated up front, 2016 has been a great year of Davidoff releases, and Yamasa joins that group.

This is a cigar I’d recommend to an experienced cigar enthusiast, but I also would not discourage the novice. It’s a pricey cigar at $23.00, so that is a personal choice in terms of a purchase. What I can say is I felt I got my money’s worth – and this cigar is definitely worthy of a box purchase.