Prior to the 2016 IPCPR Trade Show, Black Label Trading Company announced its latest line called Bishops Blend. Black Label Trading Company has built a reputation for delivering some excellent maduro offerings. Bishops Blend features an Ecuadorian Maduro wrapper, but it are the filler tobaccos that set this apart. In the blend, the filler for Bishops Blend is highlighted by the incorporation of Broadleaf tobacco from both Connecticut and Pennsylvania. This particular filler combination we is something we don’t see commonly see in a blend, but for Black Label Trading Company, this is a company that has not been afraid to deviate from the norm. We’ve seen this with the use of a double wrapper on Morphine, and the use of a less common San Andres Natural wrapper on Deliverance. With the Bishops Blend now on the retailer shelves, I’ve recently had an opportunity to smoke this cigar in the Robusto size. Since the company launched three years ago, owner James Brown has done an excellent job at growing his company and portfolio. With the Bishops Blend Robusto, this perhaps is his company’s finest work to date.

The philosophy Brown has incorporated for both Black Label Trading Company and its sister brand, Black Works Studio has been a small batch “less is more” philosophy. Back in February 2015, Brown made a bold move as he opened Fabrica de Oveja Negra, his own factory in Nicaragua. This has allowed him to take a more hands-on, intimate approach to his company’s work. While Black Label Trading Company was his first brand, Brown launched his second brand, Black Works Studio late last year – allowing for him to have another creative outlet.

Without further ado, let’s take a closer look at the Bishops Blend Robusto and see what this cigar brings to the table.

In addition to the Broadleaf, Bishops Blend also incorporates Nicaraguan tobacco in the filler and utilizes Ecuadorian tobaccos for the binder and filler.

Bishops Blend is available in two sizes. Both vitolas are packaged in 20 count boxes.

Black Label Trading Company and Black Works Studio have created some artesian like cigars (i.e. the Black Label Trading Company Nocturne Snub Nose salomons and the Black Works Studio Killer Bee‘s linear strips of tobacco by the cap). Now the Bishops Blend takes its place among these artesian cigars as this is a very unique Robusto. The Bishops Blend Robusto features a chocolate-chip shaped cap that gives the cigar the appearance of a figurado. In addition the cigar also features a covered footer. 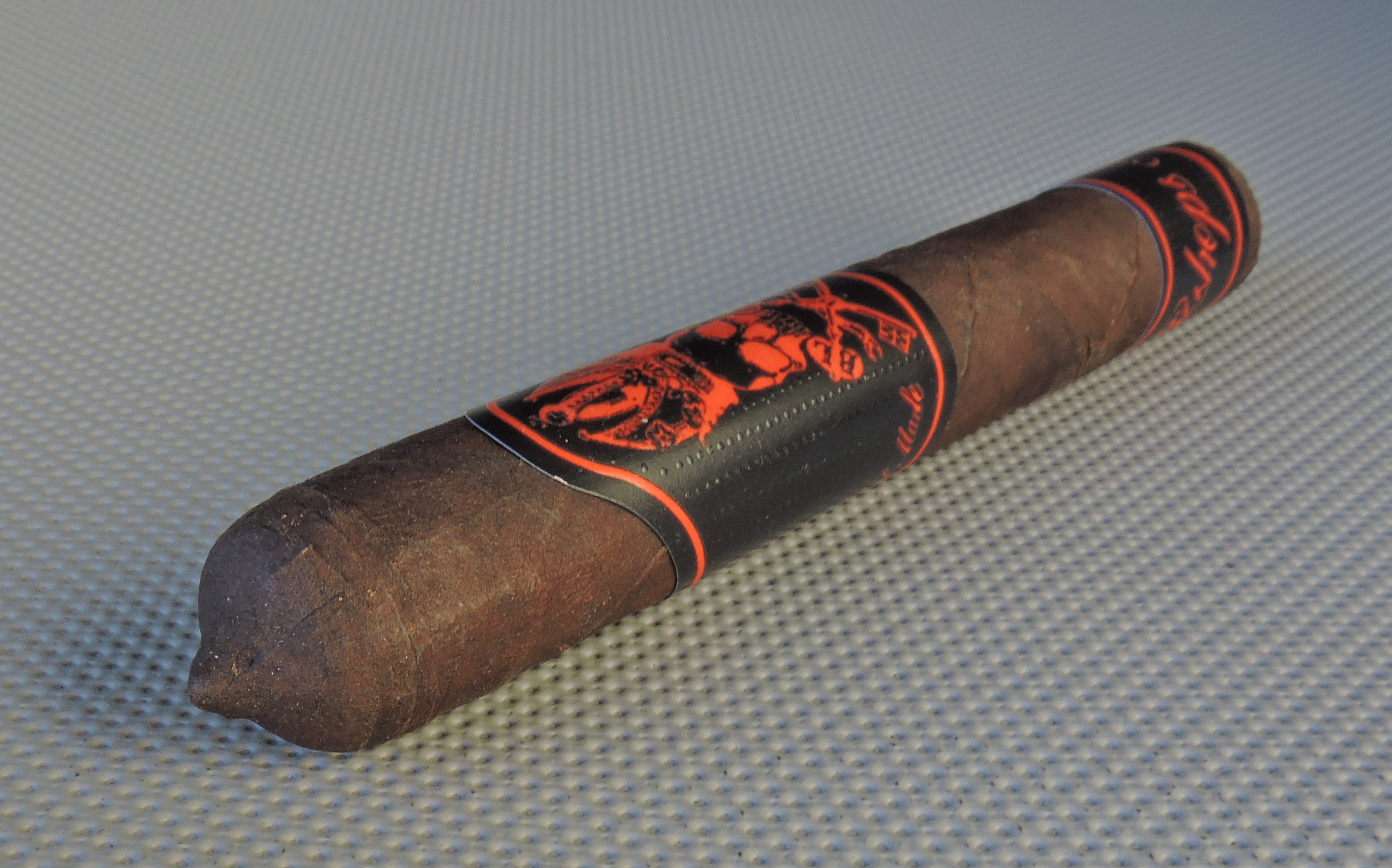 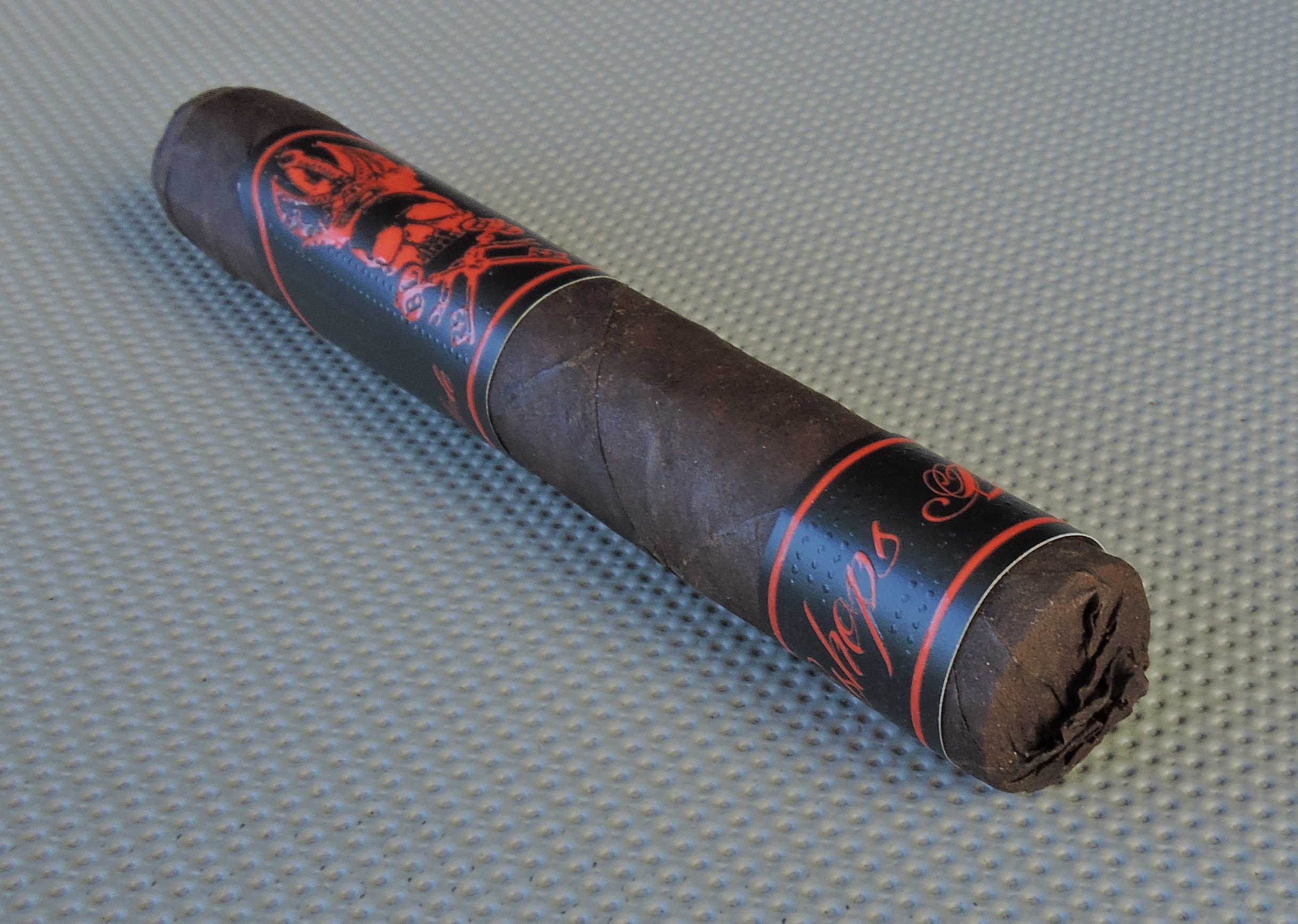 The Ecuadorian Maduro wrapper of the Bishops Blend Robusto had a rich espresso bean color. The wrapper had a light coat of oil on it. I found the wrapper to be on the smooth side – with some very thin veins and very thin wrapper seams. Overall I found the cigar to have a firm pack with no soft spots.

There is also a secondary footer band. This is also black in color with orange-red trim. On the center of the band is the text “Bishops Blend” in orange-red font.

Prior to lighting the Bishops Blend, I went with a straight cut to remove the cap. I made a delicate, razor thin cut and essentially removed the “chocolate chip” shape from the cigar. Once the cap was removed, I moved on to the pre-light draw. The pre-light draw provided a mix of earth, dark chocolate and a slight cedar note. Overall I considered this to be a satisfactory pre-light draw. At this point, I removed the footer band, lit up the Bishops Blend and awaited what the smoking phase would have in store.

Later in the first third of the Bishops Blend Robusto, a cool citrus note emerged in the background joining the mineral and pepper notes. While the cocoa and earth remained primary, the cocoa notes definitely became richer. At the same time, the cocoa had a pleasant lingering effect on the retro-hale.

The second third saw the cocoa notes at its peak of richness. In the forefront, these cocoa notes still had a mix of some classic earth notes and this provided a nice amount of balance. During this stage, the mineral notes slowly increased in intensity as well.

By the last third of the Bishops Blend, there still was plenty of rich cocoa and earth notes in the forefront. The mineral component of this cigar had closed in on the forefront, but didn’t quite reach the level of the cocoa and earth. Meanwhile the pepper notes also slowly increased, but in the end they still were a secondary note. This is the way the cigar experience came to a close. The resulting nub was a real finger-burner – firm to the touch and cool in temperature.

The Black Label Trading Company Bishops Blend maintained a straight burn path from start to finish. There was a slight bit of jaggedness on the burn line, but in the end this didn’t warrant much in the way of additional touch-ups. The resulting ash had a salt and pepper color complexion. This was an ash that was quite firm and one that came off the cigar in clean chunks. Meanwhile the burn rate and burn temperature were ideal.

The draw to the Bishops Blend Robusto was also excellent. The firmer pack of the cigar gave this it a slight amount of resistance on the draw – resulting in what I considered to be a positive.

From a strength perspective, I found the Bishops Blend Robusto to start out on the upper end of medium. Toward the end of the second third, I had found there was a slight spike in strength that pushed it into the medium to full territory. As for the body, combined with the retro-hale; there was some nice depth to the flavors. I found the Bishops Blend started out on the upper end of medium to full-bodied. Toward the last third, the body increased enough to cross it into full-bodied territory.

Over the past couple of years, I’ve been smoked many of Brown’s cigars from both the Black Label Trading Company and Black Works Studio brand. The past year has really seen his work “in the zone” as he has been delivering some very high quality smokes. Back in May, I felt Brown hit a new high with the Black Works Studio Killer Bee. Now along comes the Black Label Trading Company Bishops Blend Robusto and things go yet to another level. I feel Brown found a great way to get the best most of the fillers with this cigar as you get both the Connecticut Broadleaf (in my opinion, the sweet cocoa flavors) and Pennsylvania Broadleaf (in my opinion the earth and mineral) qualities. I didn’t find this to be an overly complex cigar, but one that delivered great flavors and these flavors are balanced.

This is a cigar I’d recommend to an experienced cigar enthusiast, but it’s a great one for a novice to progress to something on the medium plus side. As for myself, not only is this worth of a box worthy purchase, but it is one that I’d take Chuck Norris on for.