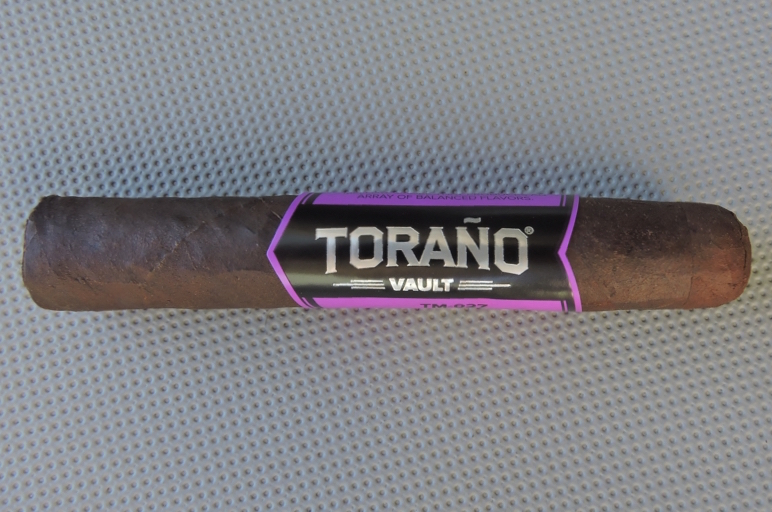 The Torano Vault TM-027 is one of four new blends rolled out by General Cigar Company under Torano Cigars’ Vault line. These blends represent the first new Torano blends developed by General Cigar since it acquired the brands of Torano Family Cigars back in 2014. It was in 2011 when the Torano Vault line made its debut under the moniker “Blends from the Vault”. The story of this line dates back to 1982 when then company president Carlos Torano started a book that logged all of the blends since 1982 that were worked on by company. This book was literally kept under lock and key in a safety deposit box (i.e. “Vault”). The purpose of this series was to revisit some of these blends, tweak them, and then ultimately release to the market. It appears that General Cigar has picked up on this concept for the four new blends in the Torano Vault line. Today we take a look at the Torano Vault TM-027 (also called the Torano Vault Purple) in the Robusto size. Overall I found this to another excellent cigar in the line that comes in at a very affordable price.

For the four new blends that were introduced to the Torano Vault line, General Cigar followed a strategy that has been employed across the other brands in its portfolio. Namely, it has divided the releases among brick and mortar exclusives and internet and catalog exclusives. The names of each of the blends are the names from the blend book. At the same time, they are also nicknamed for the color of the packaging.

These new lines are as follows: 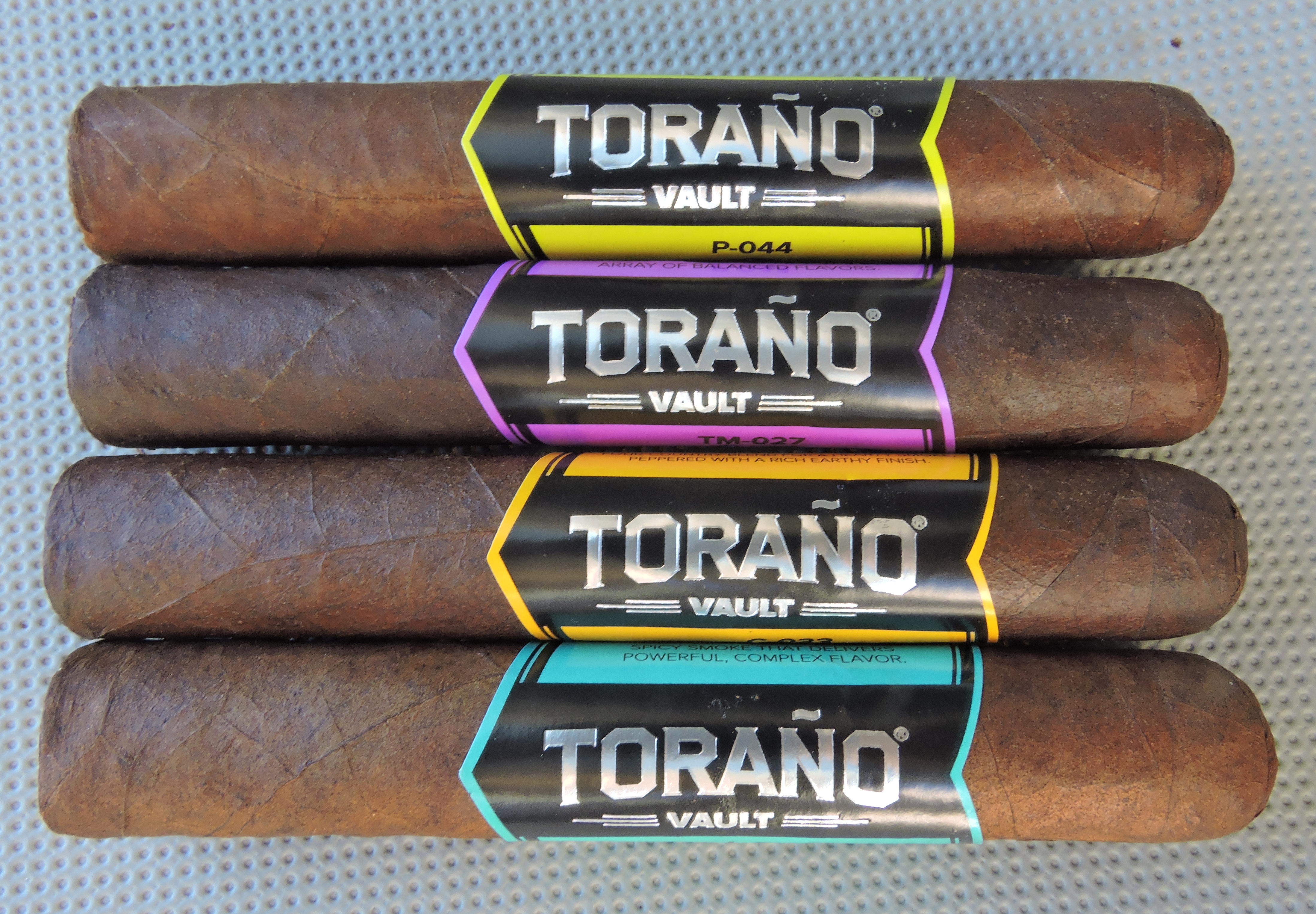 There were also three legacy Torano Vault cigars prior to the General Cigar acquisition of the brands:

The new Torano Vault cigars introduce new packaging, banding, and logos. While there is no doubt the cigars feature attention grabbing colors (this is facilitated the “color” nicknames for each of the Vault releases). 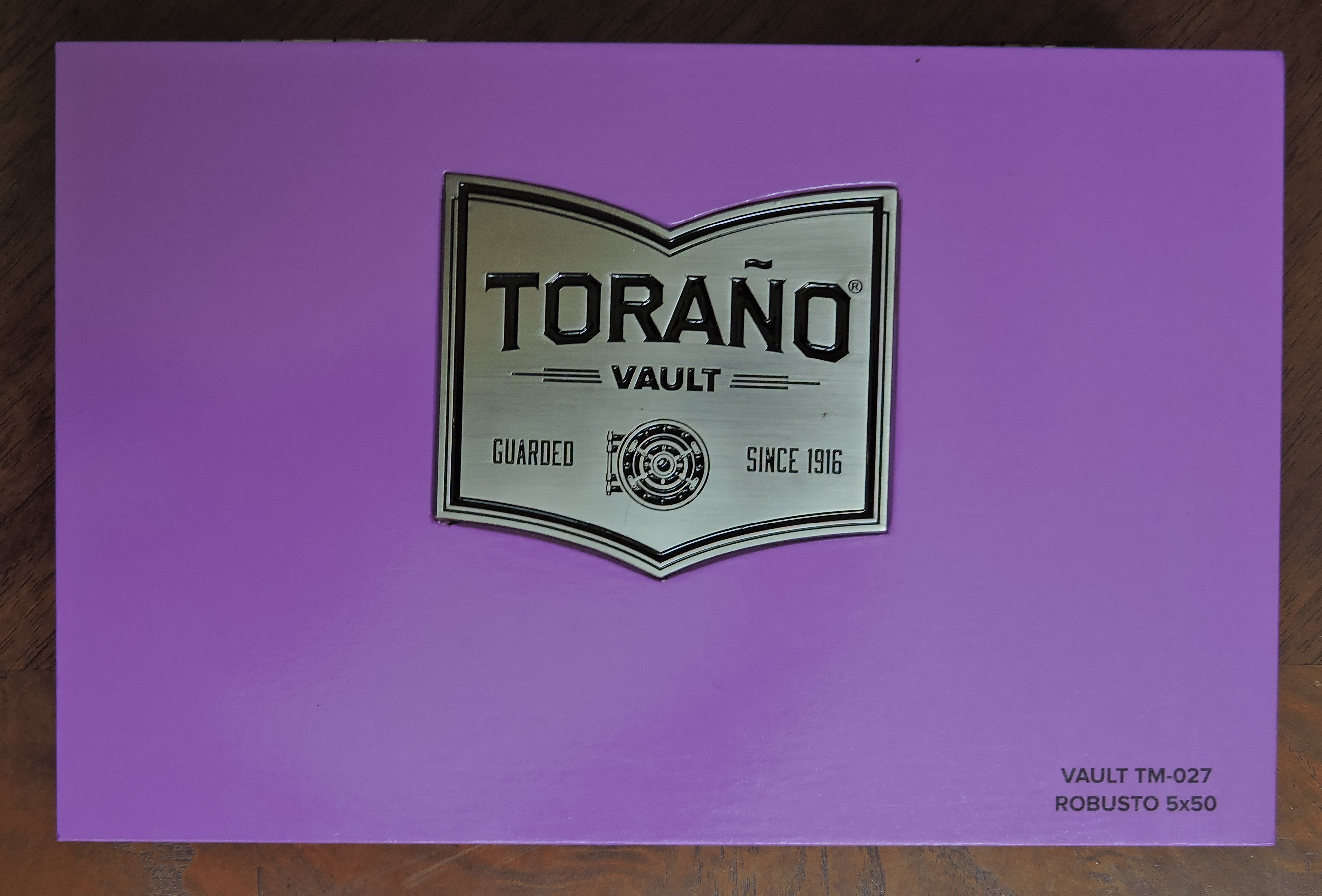 There have been both comparisons and criticisms for the design. The cigars feature attention grabbing colors and a horizontal bands. The criticism is due to the parallels that can arguably drawn with the way Camacho did its rebranding in 2013.

Without further ado, let’s take a look at the Torano Vault TM-027 (Torano Vault Purple) Robusto and see what this cigar brings to the table:

As mentioned the Torano Vault TM-027 is highlighted by its dark San Andres Mexican wrapper. 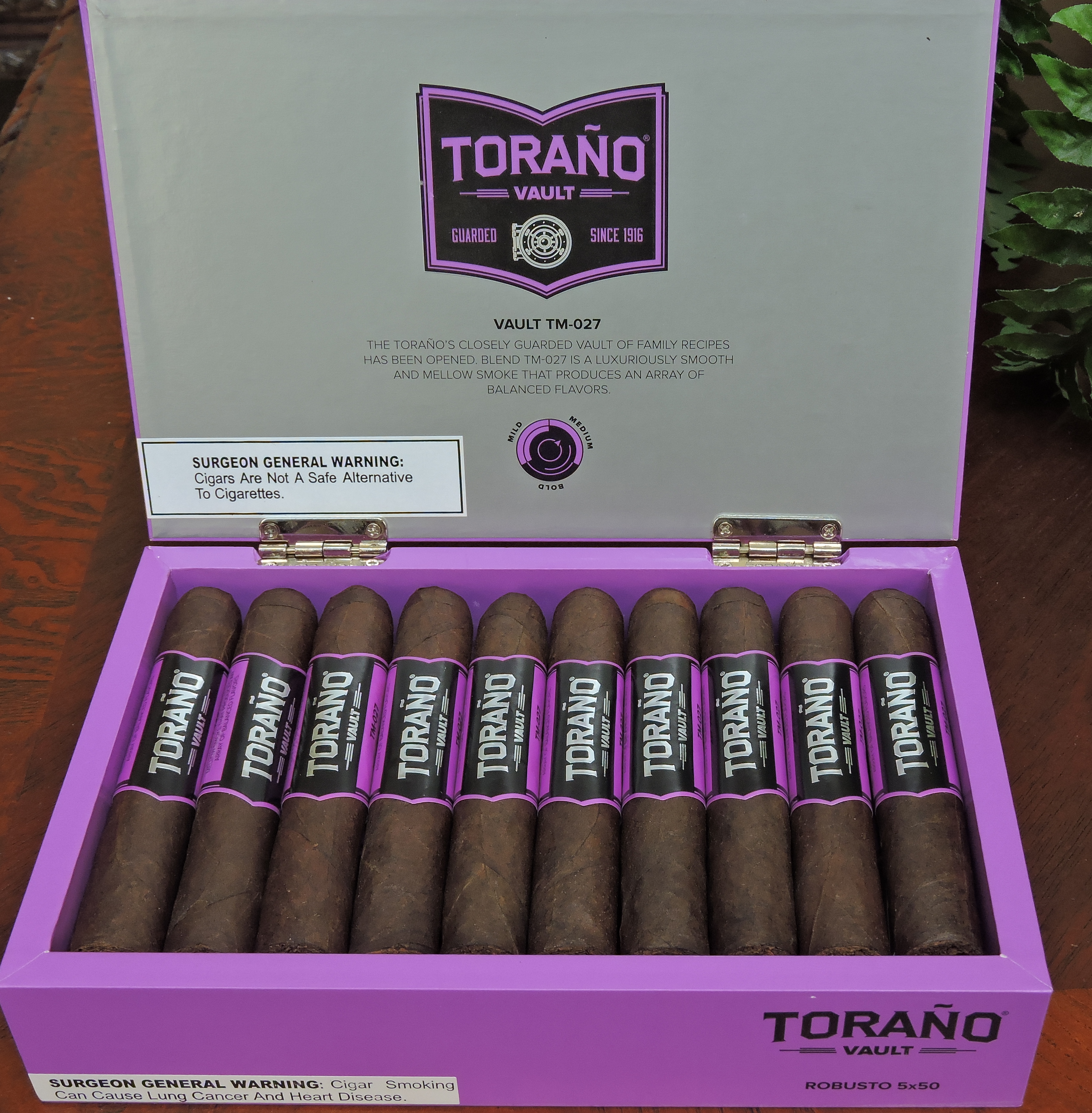 The San Andres wrapper of the Torano Vault TM-027 had a dark espresso color bean color to it. On the surface of the wrapper was a thin coating of oil on it. There were some thin visible wrapper seams as well as some thin visible veins. Overall I found this to be a well-packed cigar with no soft spots. 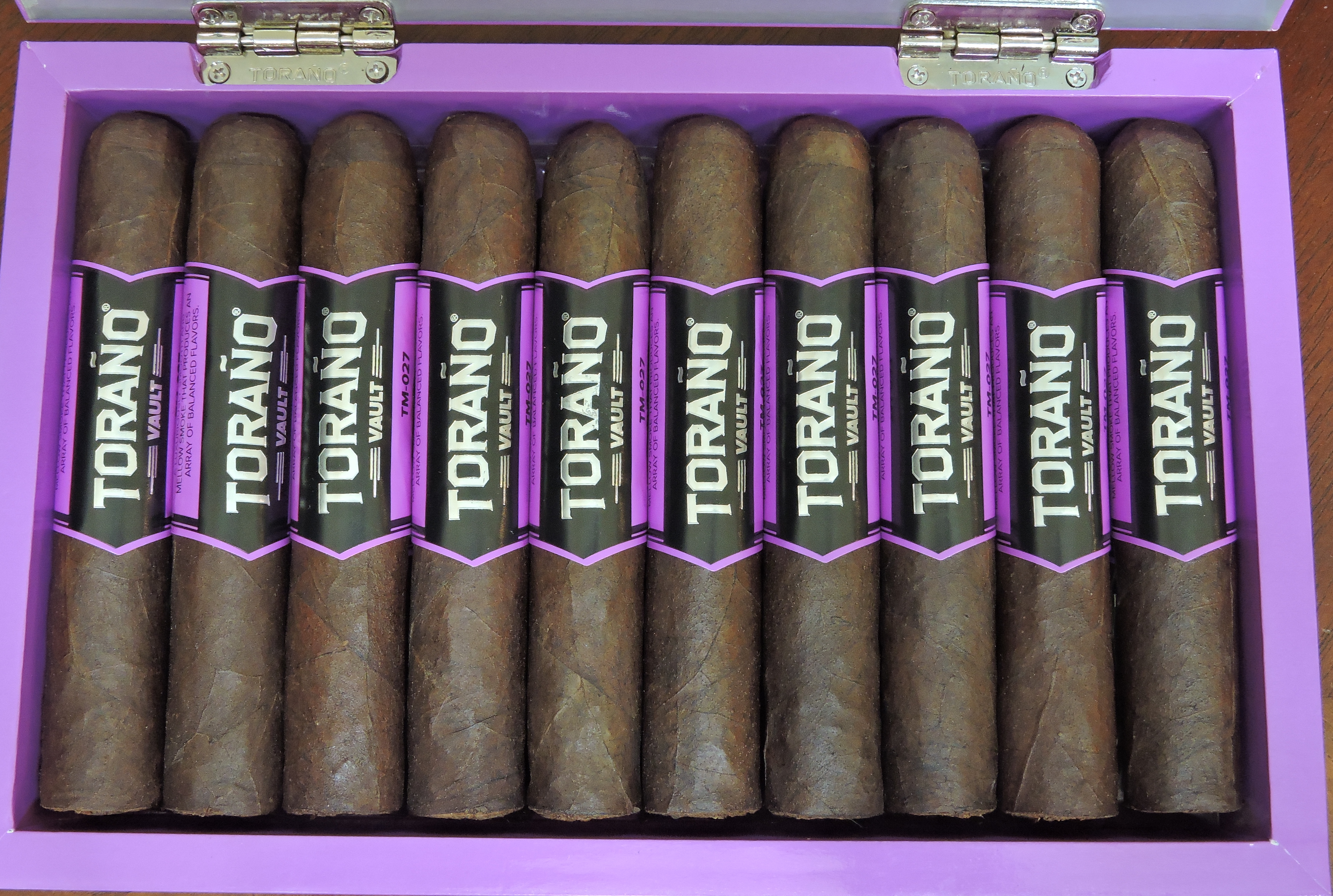 The band to the Torano Vault TM-027 has a a purple color. When you unwrap the band, it has the shape of the new Torano Vault shield logo when held sideways. 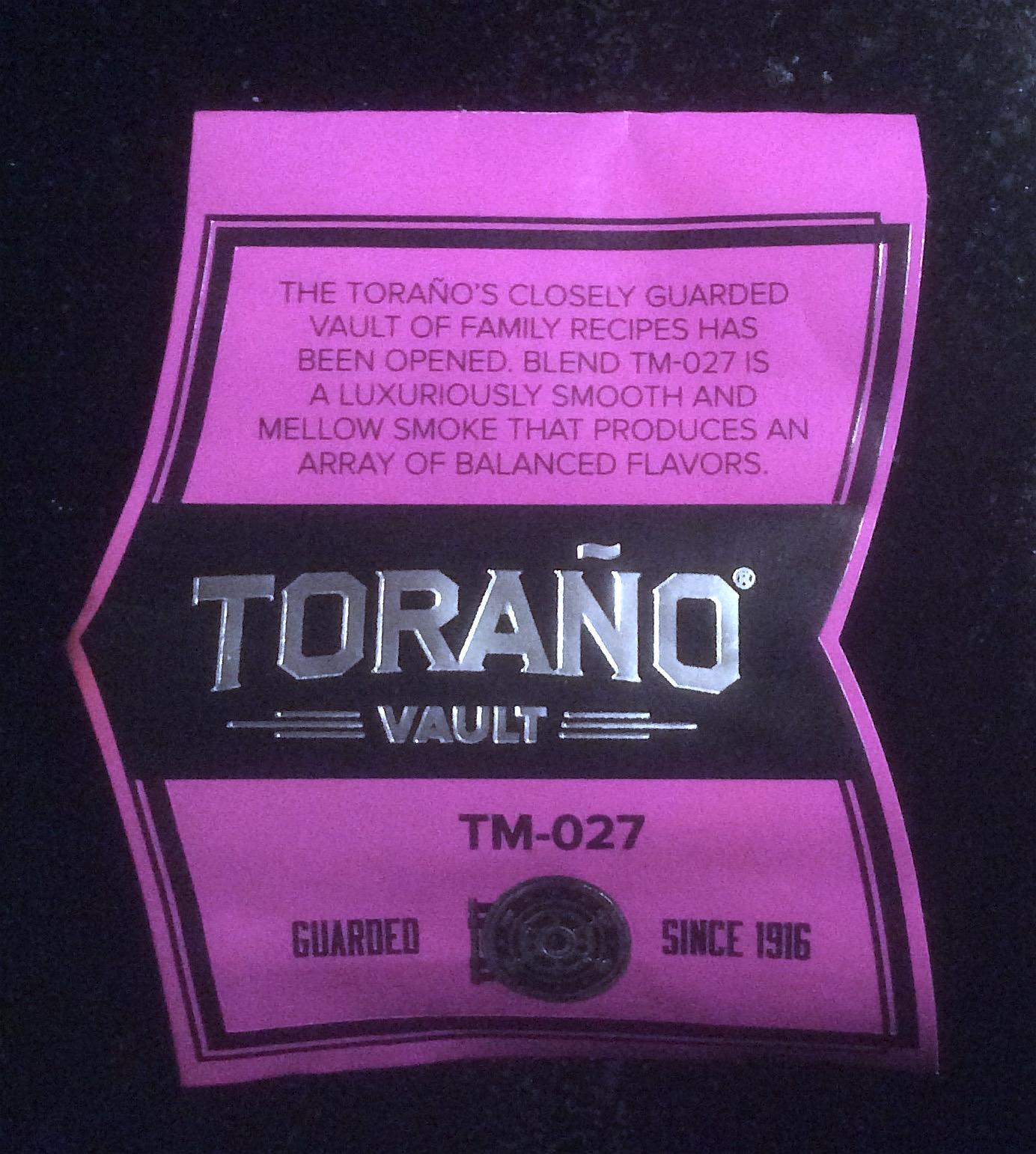 The top of the band has purple  background with the text “THE TORAÑO’S CLOSELY GUARDED VAULT OF FAMILY RECIPES HAS BEEN OPENED. BLEND TM-027 IS A LUXURIOUSLY SMOOTH AND MELLOW SMOKE THAT PRODUCES AN ARRAY OF BALANCED FLAVORS.”

Prior to lighting up the Torano Vault TM-027 Robusto I went with my usual choice of a straight cut. Once I clipped the cap off, I moved on to the pre-light draw experience. The cold draw delivered a mix of earth, cedar, and a slight amount of fruit sweetness. Occasionally I would pick up a coffee note as well. Overall I considered this pre-light draw to be satisfactory. At this point I was ready to light up my Torano Vault TM-027 Robusto and see what the smoking phase would have in store.

The Torano Vault TM-027 Robusto started out with a mix of coffee, wood, white pepper, and a slight fruit note. The coffee notes became primary early on while the wood, white pepper and fruit became secondary notes. While the fruit notes were in the background, they varied in intensity and from time to time popped into the forefront. Meanwhile, the white pepper was present on the retro-hale.

The second third saw a similar profile to the first third with a couple of differences. For starters, the coffee notes now had some chocolate notes mixed in. The other difference was that the wood notes were greatly diminished.

During the last third of the Torano Vault TM-027 Robusto, the chocolate notes were much less of a factor. The coffee notes still remained in the forefront. The pepper notes increased in intensity, but didn’t quite become a primary note. There still were some touches of fruit and wood in the background. This is the way the cigar experience came to a close. The resulting nub was firm to the touch and cool in temperature.

The burn to the Torano Vault TM-027 Robusto scored very nicely. It maintained a straight burn path and had a relatively straight burn line. The resulting ash had a salt and pepper color. This was an ash that leaned toward being on the firmer side. As for the burn rate and the burn temperature, both were ideal.

As for the draw, it was outstanding. I found the tighter pack of this cigar created a touch of resistance. However, this is actually a very good thing as I like a slight resistance on a cigar. With the case of the Torano Vault TM-027 Robusto, the resistance level was ideal. In addition, the TM-027 Robusto had a nice amount of smoke production. Overall this draw earned our highest “Exceptional” rating.

It had a touch of resistance – which is something I like. There was also a nice amount of smoke production.

The Torano Vault TM-027 Robusto is cigar I found to be medium strength and medium-bodied throughout the smoking experience. While I found the strength and body to have increased in intensity, both were still in the medium range of the spectrum at the end of the smoking experience. In terms of strength versus body, I found both attributes to balance each other nicely with neither attribute overshadowing the other.

Back when I assessed the Torano Vault P-044, I commented that when it comes to Torano Cigars they usually deliver a “flavorful, medium  / medium plus cigar at a very affordable price”. I had found the P-044 to be that type of cigar and now I can add the Torano Vault TM-027 into that category. The TM-027 is a cigar with very good flavor. It delivers the notes of coffee, earth, and spice that I have come to expect from a San Andres wrapped cigar. I wouldn’t categorize the TM-027 as the most complex of cigars, but there was still enough to keep me interested. At the same time, the San Andres wrapper didn’t overpower the blend. Overall this is a cigar I could recommend to the novice or experienced cigar enthusiast. As for myself, this is a cigar I would smoke again – and it’s certainly worthy of a box split.