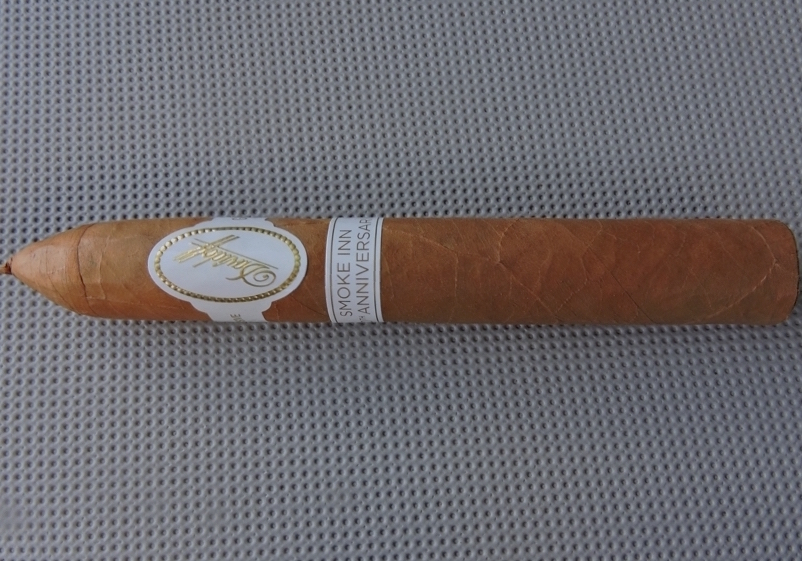 Davidoff has worked with several of its other Appointed Merchants to create anniversary cigars. Retailers such as Smoke Inn and Corona Cigar Company (who also received a 20th anniversary cigar) are two of the better known ones. While there are several other retailers that have received these cigars, most of them have flown under the radar. This is because many Davidoff Appointed Merchants have opted to not do press releases to promote these cigars (which in general is a perplexing thing when it comes to any Shop Exclusives). Smoke Inn has been quite successful with its MicroBlend series because it is one of the few retailers that puts a significant marketing push around its Shop Exclusives.

While Smoke Inn lists the Smoke Inn 20th Anniversary by Davidoff as its 11th installment, there have actually been 13 releases. This is because the Padron SI 15 release had two blends (a natural and maduro), and the Tatuaje Anarchy was re-released in 2015. For completeness, we list all of the blends here.

Without further ado, let’s break down the Smoke Inn 20th Anniversary by Davidoff and see what this cigar brings to the table.

While the blends have differed, the Connecticut Ecuadorian Rojiza wrapper seems to be the wrapper of choice when it has come to the anniversary cigars made for retailers by Davidoff.

The Smoke Inn 20th Anniversary by Davidoff comes in one size – a 6 x 52 Belicoso. This size has also been one seen across many shop exclusives Davidoff has been releasing for shop exclusives. 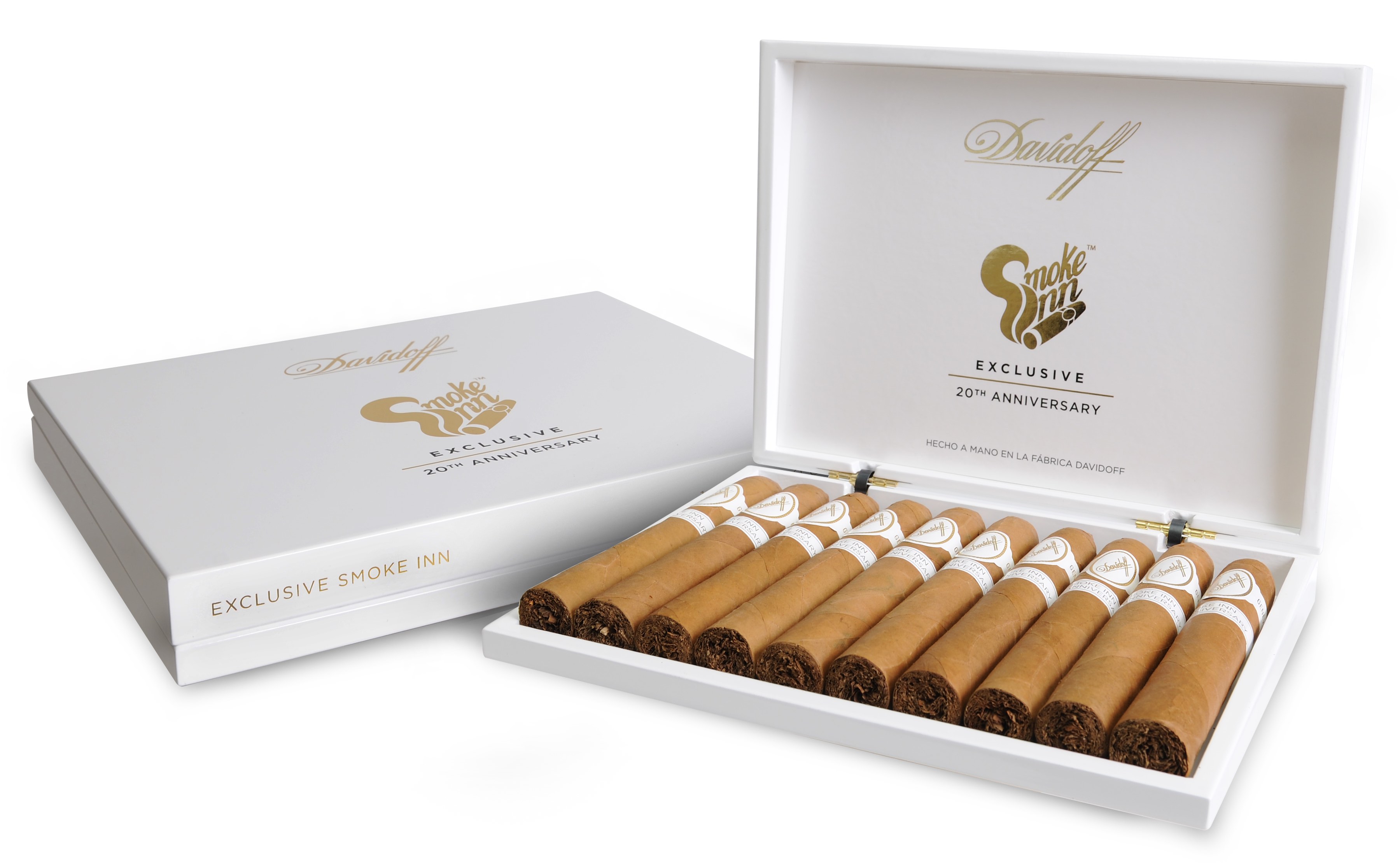 The Smoke Inn 20th Anniversary by Davidoff is packaged in 10 count boxes. A total of 300 boxes were produced.

The Ecuadorian Connecticut Rojiza is light brown in color with a slight hint of rosado coloring. There was not much oil on the surface of the wrapper. Most of the wrapper seams were well hidden. While there were some visible veins, I still found this Rojiza wrapper to be smooth. The belicoso tip has somewhat of a steep taper.

There are two bands on the Smoke Inn 20th Anniversary by Davidoff. The first band is similar to the classic a Davidoff White label. It features the name “Davidoff” in classic cursive gold-colored font on an oval field of white. There are small gold circles going around the perimeter of the oval. The word “GENEVE” (in gold font) flanks to the right of the oval field. To the left of the oval is the text “EXCLUSIVE” (small).

A secondary band sits below the Davidoff white band. It is also white in color flanked by a gold pinstripe toward the upper and lower portion on the band. In the middle of the band is the text “SMOKE INN 20TH ANNIVERSARY” in gold font.

As I typically do for belicoso vitolas, I used my Credo Special T cutter with the 36 ring gauge hole to get an ideal cut on the Smoke Inn 20th Anniversary cigar. Once the tip was removed, I moved on to the pre-light draw. The dry draw delivered a mix of cream and wood as well as some light fruit and floral notes. Overall I considered this to be a satisfactory pre-light draw. At this point I was ready to light up the Smoke Inn 20th Anniversary cigar and awaited what the smoking phase would have in store.

The last third didn’t see much change in the flavor profile. As the Smoke Inn 20th Anniversary came to a close, the resulting nub was soft to the touch – and cool in temperature.

Overall the Smoke Inn 20th Anniversary was a well constructed cigar. The cigar maintained a relatively straight burn path and had a straight burn line. This was a cigar that did not require an excessive amount of touch-ups. The resulting ash had a salt and pepper color completion. At the same time, I found the ash of the Smoke Inn 20th Anniversary to be on the firmer side. Meanwhile the burn rate and burn temperature were both ideal. 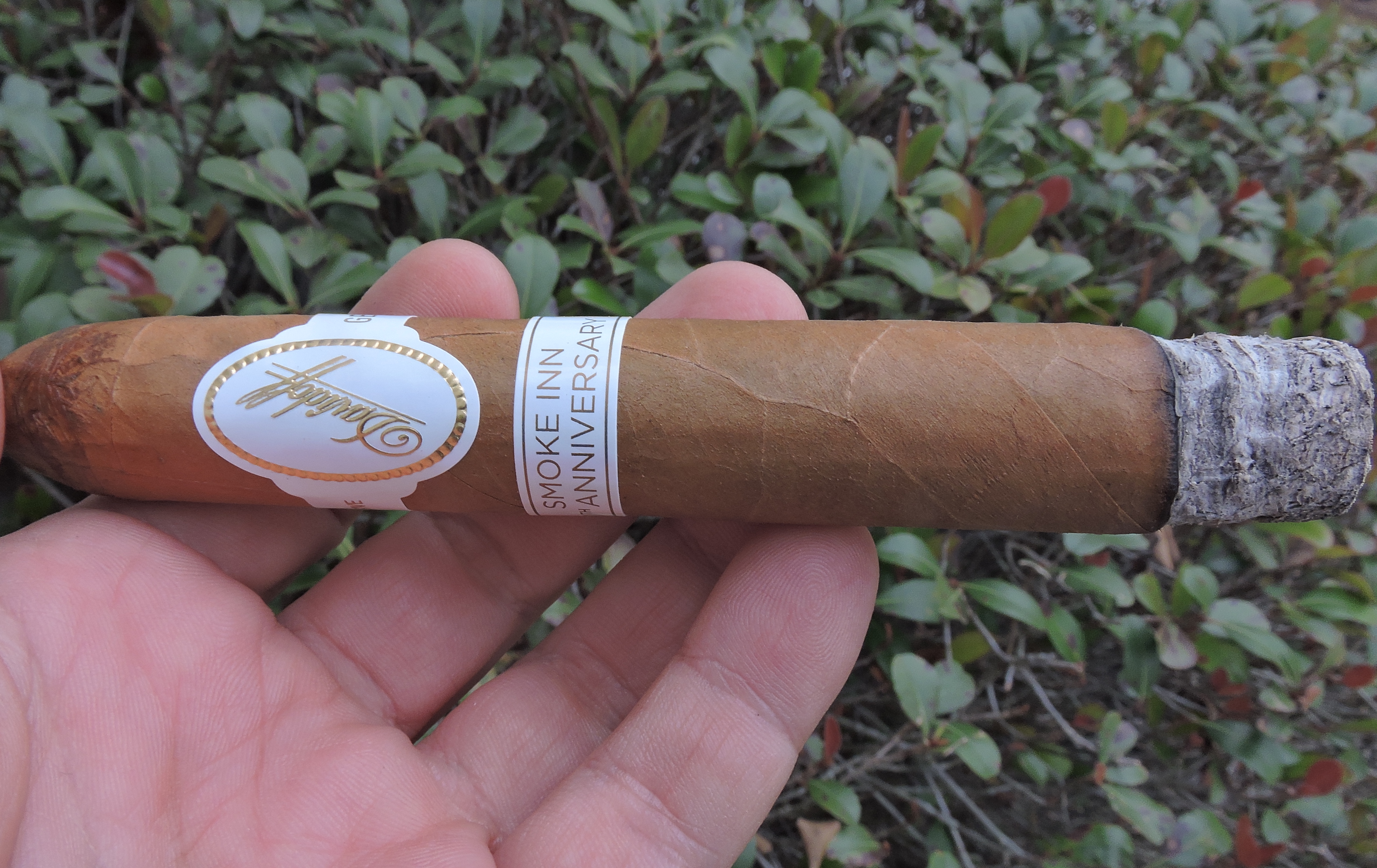 The draw to the Smoke Inn 20th Anniversary was ideal. It had a touch of resistance to it – which is something I like. The belicoso tip also held up quite well during the draw process.

When it comes to strength and body, the Smoke Inn 20th Anniversary is pretty much going to be in-line with most Davidoff White Label cigars. This is a cigar that is skewed toward the lighter side. It is a cigar that started out mild in strength. The strength slowly increased and by the second half, this cigar was in the mild to medium strength range.

Meanwhile there was a little more in the way of body. The Smoke Inn 20th Anniversary started out mild to medium bodied. By the second half, the body had increased enough and crossed into medium territory.

Overall, this is going to be a nice cigar that complements the Davidoff White Label series nicely. The dialed back profile works very well with the flavors delivered. Overall, this is a cigar I’d recommend to either a novice or experienced cigar enthusiast. In particular, its great for someone looking for a dialed back cigar. As for myself, this is a cigar I’d smoke again – and it’s worthy of getting a fiver.