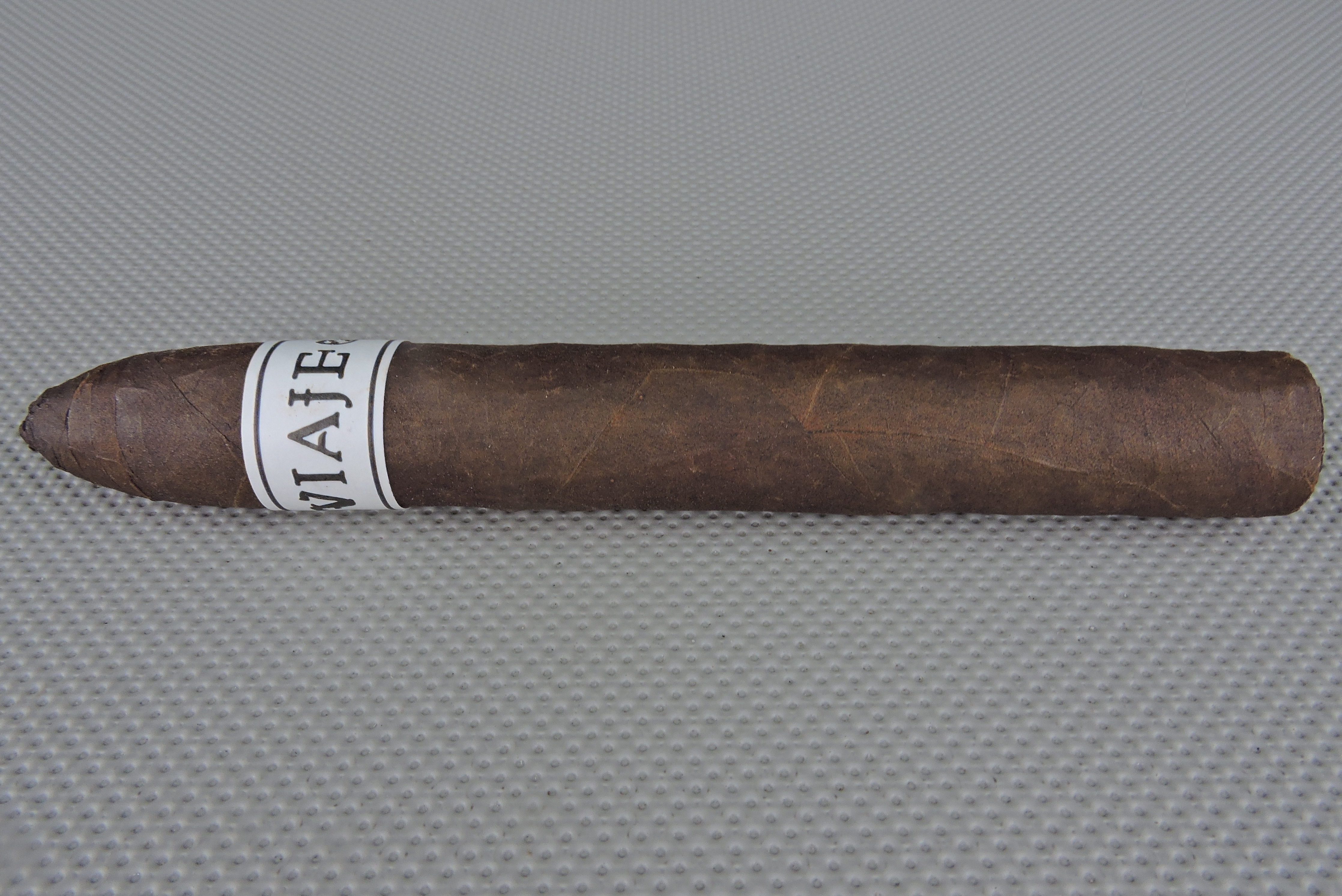 Back on Episode 192 of Stogie Geeks, Viaje President Andre Farkas discussed a new project he was launching at the 2016 IPCPR Trade Show known as the Viaje Birthday Blend. The Birthday Blend draws its inspiration from Old Forester’s Birthday Bourbon, which is an annual release to commemorate Old Forester founder George Garvin Brown’s birthday. Since 2002, it has been an annual limited release by the bourbon company. For Farkas, he decided to come up with a similar concept to commemorate his own birthday. At this year’s 2016 IPCPR Trade Show, Farkas showcased the 2016 edition Viaje Birthday Blend and it made its way to retailers shortly after the Trade Show. Recently I’ve had an opportunity to smoke the Viaje Birthday Blend 2016 edition. Overall I found this to be an excellent cigar – and a nice expression of what Farkas and Viaje are known for.

Farkas originally planned to give the Viaje Birthday Blend its own unique packaging, however with the FDA’s August 8th deadline looming, Farkas wanted to make sure he could release the cigar to market. He opted to use the plain Viaje White Label Project (WLP) banding and packaging. Farkas has said there are plans to implement the regular packaging – and with a recent court ruling that will allow labeling changes, he will be able to do so. Farkas did state that this was technically not a White Label Project release as this series focuses more on experimental blends and factory errors. 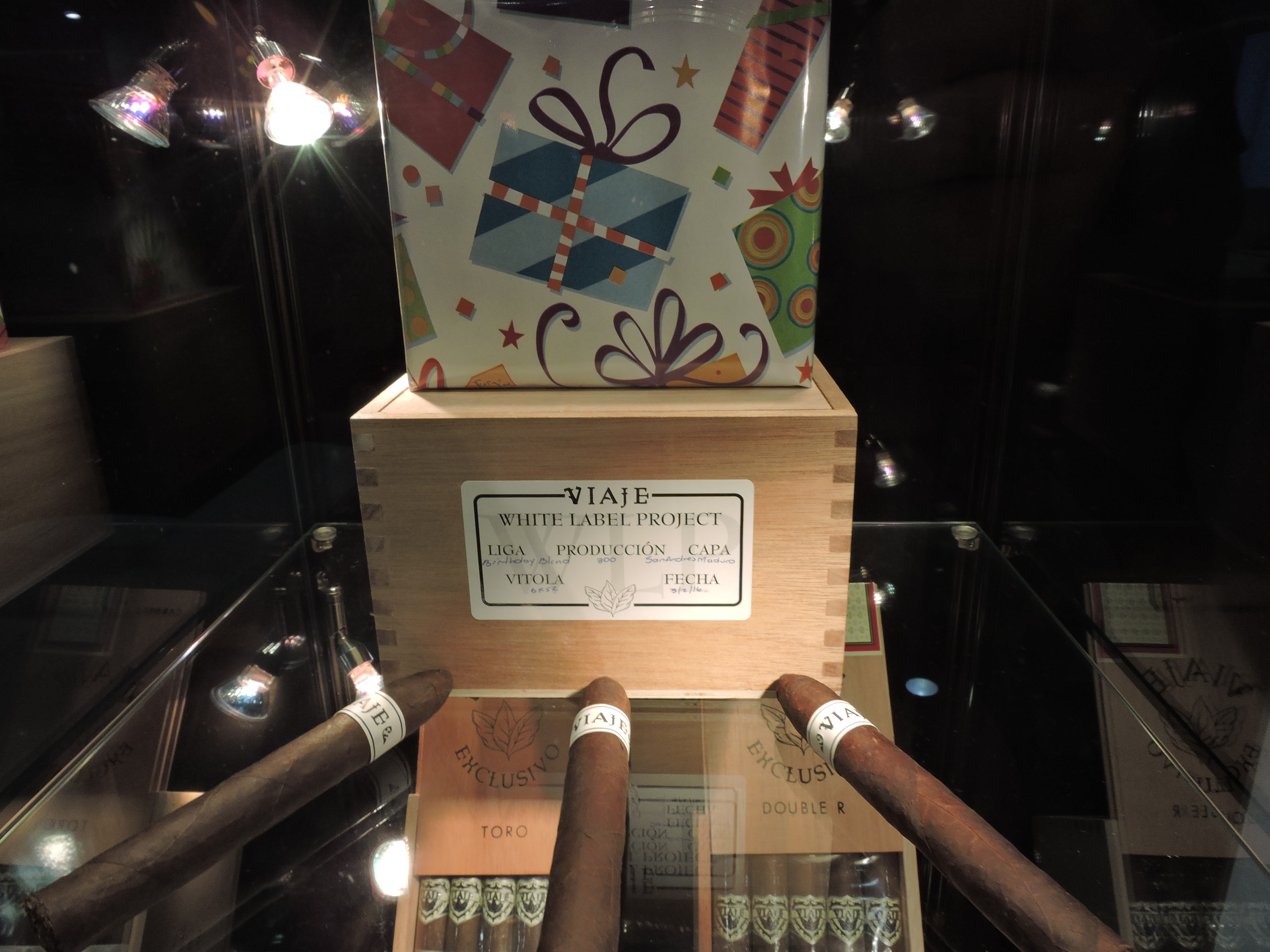 The Viaje Birthday Blend 2016 was released in 38 count boxes. Farkas originally told us on Stogie Geeks that each subsequent year he was planning on adding an additional cigar into the box count similar to adding candles on a birthday cake. The same court ruling that allowed the labeling changes does not allow quantity changes (without FDA approval), so it is unclear if that concept will be carried forward.

Without further ado, let’s take a closer look at the Viaje Birthday Blend 2016 and see what this cigar brings to the table.

The Viaje Birthday Blend 2016 is made at the TABSA factory in Nicaragua. It is a classic TABSA maduro blend featuring a San Andres wrapper over Aganorsa grown Nicaraguan tobaccos.

The Viaje Birthday Blend 2016 is available in one size -a 6 x 52 Belicoso. As mentioned the cigar is packaged in 38 count boxes. A total allocation of 300 boxes were produced.

The San Andres Maduro wrapper has a dark wood color to it. Upon closer examination, there was some darker marbling on the wrapper’s surface. There was a light coating of oil on the wrapper. The is a wrapper that had some thin visible veins and thin visible wrapper seams. Overall I found the surface of this wrapper to be smooth (especially for a San Andres). The tip of the belicoso has a gentle slope to the tip from the base of the cigar.

As mentioned the Viaje Birthday Blend 2016 utilizes Viaje’s White Label Project banding. This is a simple white-colored band  with the text “Viaje” prominent in a black colored-font. There is a thin black pinstripe at the top and bottom of the band.

As I typically do for belicoso vitolas, I used my Credo Special T cutter with the 36 ring gauge hole to cut the tip of this belicoso. Once the tip was removed, I moved on to the pre-light draw. The cold draw delivered notes of chocolate, wood, and a slight fruit note. Overall I considered the pre-light experience of the Viaje Birthday Blend 2016 to be satisfactory. At this point, I was ready to light up this belicoso and see what the smoking phase would have in store.

The Viaje Birthday Blend 2016 kicked off with notes of dark chocolate, cedar and cherry. As the flavor profile evolved, the dark chocolate notes moved to the forefront. At the same time, the cedar and cherry notes receded into the background. Throughout the first third, the dark chocolate notes got sweeter. At the same time, both a meaty and red pepper note surfaced in the background. The red pepper along with the cedar was present on the retro-hale.

As the Viaje Birthday Blend moved through the second third, the sweetness of the dark chocolate diminished, and some earthy notes entered the equation as a primary flavor. The red pepper notes also emerged as a close secondary note. Meanwhile the cedar, meat, and cherry notes were further in the background.

As the cigar moved toward the end of the second third, the earthy notes remained primary. Meanwhile, the red pepper notes closed in on the forefront and the chocolate notes became secondary. The cherry and cedar also remained present and the meaty notes dissipated.

The last third of the Viaje Birthday Blend 2016 saw the red pepper notes become a primary flavor with the earth notes. There still was some chocolate and cherry present in the background. This is the way the cigar experience would come to a close. The resulting nub was firm to the touch and cool in temperature.

The Viaje Birthday Blend 2016 maintained a relatively straight burn path from start to finish. I did find the burn line had some jaggedness early on. This was remedied with some touch-ups. I didn’t find this cigar to require an excessive amount of touch-ups. Meanwhile, the resulting ash was light gray in color. It wasn’t an overly firm ash, but it was far from a loose, flakey one. As for the burn rate and burn temperature, both were both ideal. 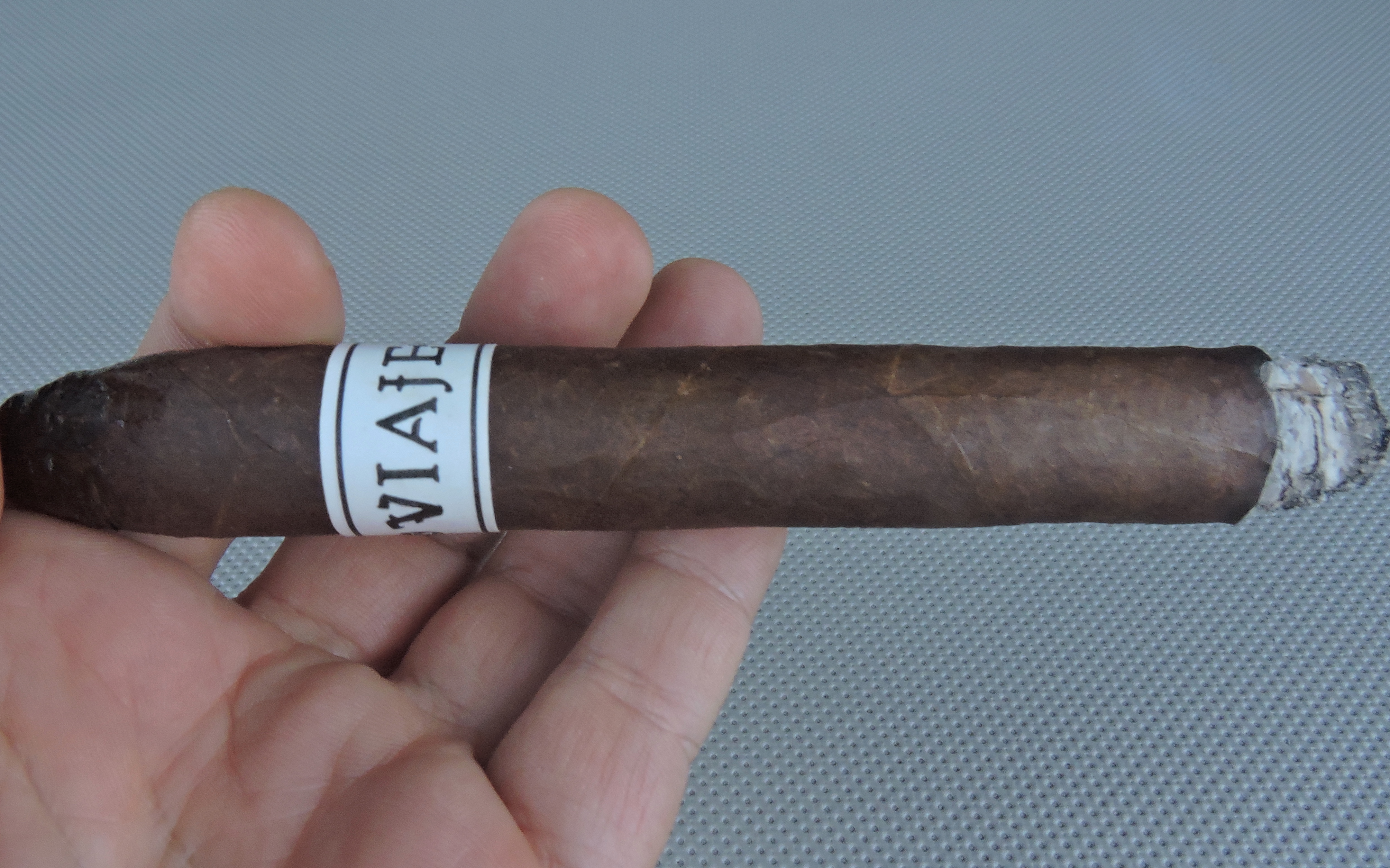 Burn of the Viaje Birthday Blend 2016

Normally I like a little resistance on the draw. With the Viaje Birthday Blend 2016, I found it to be a  little too snug for me. While the cigar did not need to be relit, this still was a draw that required more effort that I prefer. At the same time, the belicoso tip held up quite well during the smoking experience.

In terms of body, the Viaje Birthday Blend 2016 falls into the medium range. There is a slight intensity of the flavors along the way, but in the end I still found this cigar to finish out in the medium range.

The strength of the Viaje Birthday Blend also started out medium. Toward the later part of the second third, I found the strength of this cigar to spike. It moved to medium to full and by the last third, this cigar was a delivered some real firepower at the full level.

When it came to strength versus body, while both attributes start out even, toward the last stages of the cigar, the strength had a significant edge.

I mentioned this cigar was a nice expression of what Viaje is known for. Over the years, Viaje has had an excellent track record of maduro releases, and this one certainly is another one of them. The kick in strength during the latter part of the cigar also was emblematic of a classic full strength Viaje cigar. As I mentioned, this did have a tighter draw than I prefer, but this was a case where the pluses far outweighed the minuses. Overall this is a cigar I would steer to a more seasoned cigar enthusiast. As for myself, this is a cigar I would definitely smoke again. This is still a Viaje blend I’d like to see plenty more of. It’s a cigar worthy of a box split.