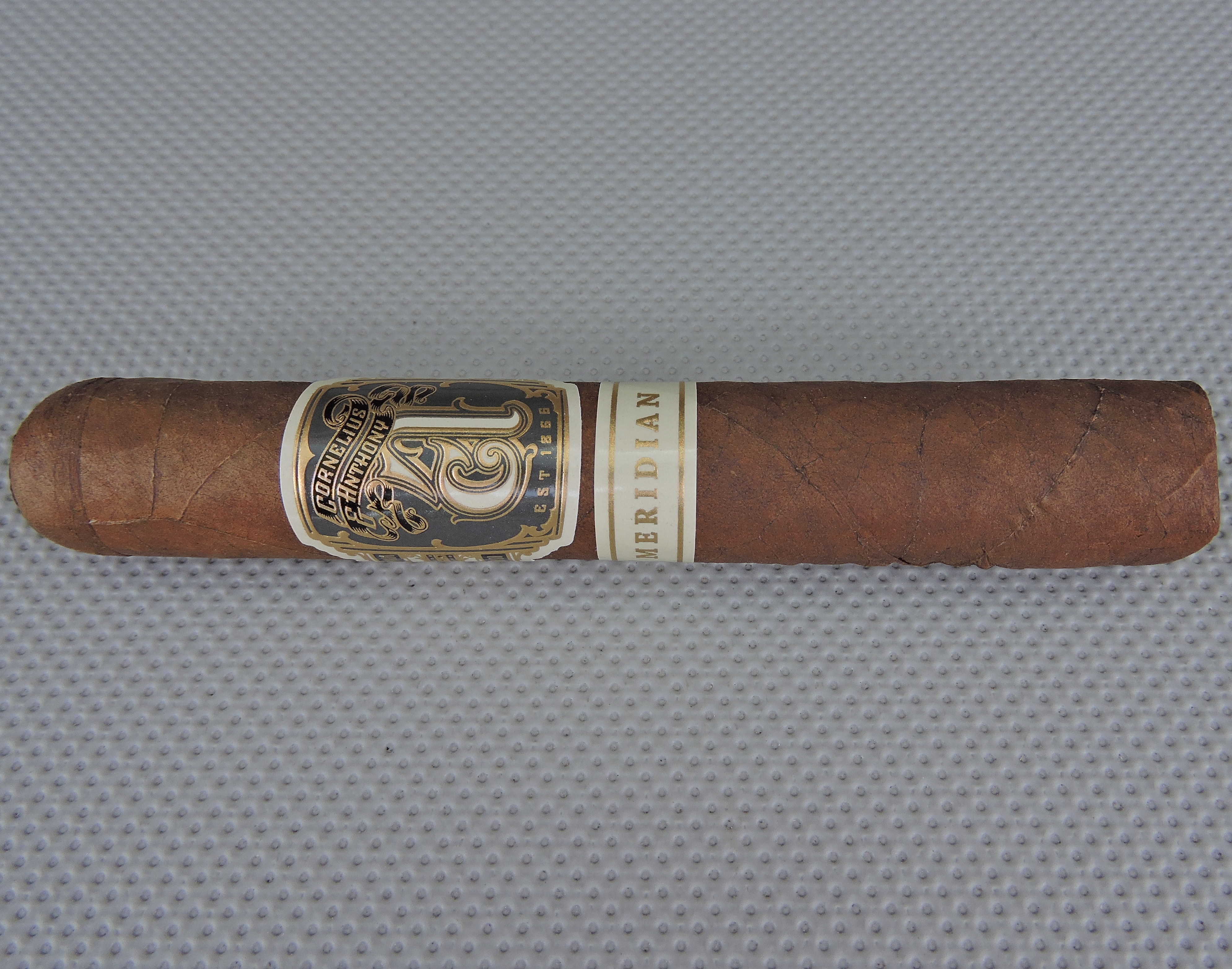 Cornelius & Anthony is the premium cigar division of Virginia-based tobacco company, S & M Brands. S & M Brands is owned by Steven Bailey. The Bailey family has been growing tobacco for over 150 years. The Cornelius & Anthony name is derived from Cornelius Bailey, Steven Bailey’s great-great-grandfather and the first member of the Bailey family to farm tobacco. It is also derived from Steven Bailey’s middle name which is Anthony. While Cornelius & Anthony has been on the premium cigar market scene for a few years, 2016 was a year where the company restructured its portfolio with four lines. Three of these lines (Meridian, Venganza, and Daddy Mac) are being produced at La Zona. The fourth line, Cornelius, is being produced in the United States at the El Titan de Bronze factory in Little Havana.

And now, let’s break down the Cornelius & Anthony Meridian Robusto and see what this cigar brings to the table.

The blend for the Cornelius & Anthony Meridian consists of Nicaraguan and Dominican tobaccos covered by a Rosado wrapper from Ecuador.

The Cornelius & Anthony Meridian is available in four sizes – each packaged in 20-count boxes.

The Ecuadorian Habano Rosado wrapper of the Cornelius & Anthony Meridian Robusto has a medium to dark complexion. There is a definite “rosado” tint to the color scheme. Upon closer examination, some darker mottling can be seen on the surface. The wrapper had a light coating of oil. While there were some visible veins, the darker complexion of the wrapper did a good job at hiding the wrapper seams.

There are two bands to the Cornelius & Anthony Meridian. The primary band is the same one found across other Cornelius & Anthony lines. The band is gray in color with white trim. Prominently displayed on the front of the band is the large white and gold interlocking “CA” logo. Above the logo are two gray ribbon designs trimmed in gold. One ribbon has the text “CORNELIUS” and the other has the text “& ANTHONY” – both in gold font. Below the “CA” logo is the text “EST 1866” in small, gold font. There are also some gold adornments on the front of the band. On both the left and right side of the band are a series of white, gold, and gray stripe patterns.

The secondary band sits just below the primary one. It is white with gold pinstripes near the top and bottom. In between the pinstripes is the text “MERIDIAN” in gold font.

Prior to lighting up the Cornelius & Anthony Meridian Robusto, I went with a straight cut to remove the cap. After clipping the cap, I commenced with the pre-light draw. The cold draw produced notes of natural tobacco, cedar, and floral. Overall I considered this to be a satisfying pre-light draw. At this point, I was ready to light up the Meridian Robusto and see what the smoking phase would have in store.

The start of the Cornelius & Anthony Meridian Robusto produced a mix of damp earth, black pepper, cedar, and fruit sweetness. The damp earth note might not sound like the most glamorous flavor, but it was balanced nicely by the other flavors. The damp earth became a primary flavor early on with the other flavors receding into the background. Meanwhile, there was an extra layer of black pepper I detected through the retro-hale.

During the first third, the fruit notes started to take on more natural tobacco qualities. Toward the end of the first third, it joined the damp earth in the forefront. As the Meridian Robusto progressed through the second third, the fruit completed the transformation into a full natural tobacco note. This still contributed some sweetness to the flavor profile. Meanwhile, the pepper and cedar remained in the background, but the pepper notes started to increase past the midway point.

The last third saw the damp earth notes regain control as the primary note. The natural tobacco receded joining the pepper notes. I also still detected some cedar a little further back. This is the way the Cornelius & Anthony Meridian Robusto came to a close. The resulting nub was firm to the touch and cool in temperature.

In terms of its burn, the Cornelius & Anthony Meridian Robusto scored nicely. The cigar maintained a straight burn path from start to finish. At times there was a slight jaggedness to the burn line, this was easily remedied with some touch-ups. The resulting ash had a salt and pepper color scheme to it. This cigar had an ash that leaned toward being on the firmer side. Meanwhile, the burn rate and burn temperature were ideal. 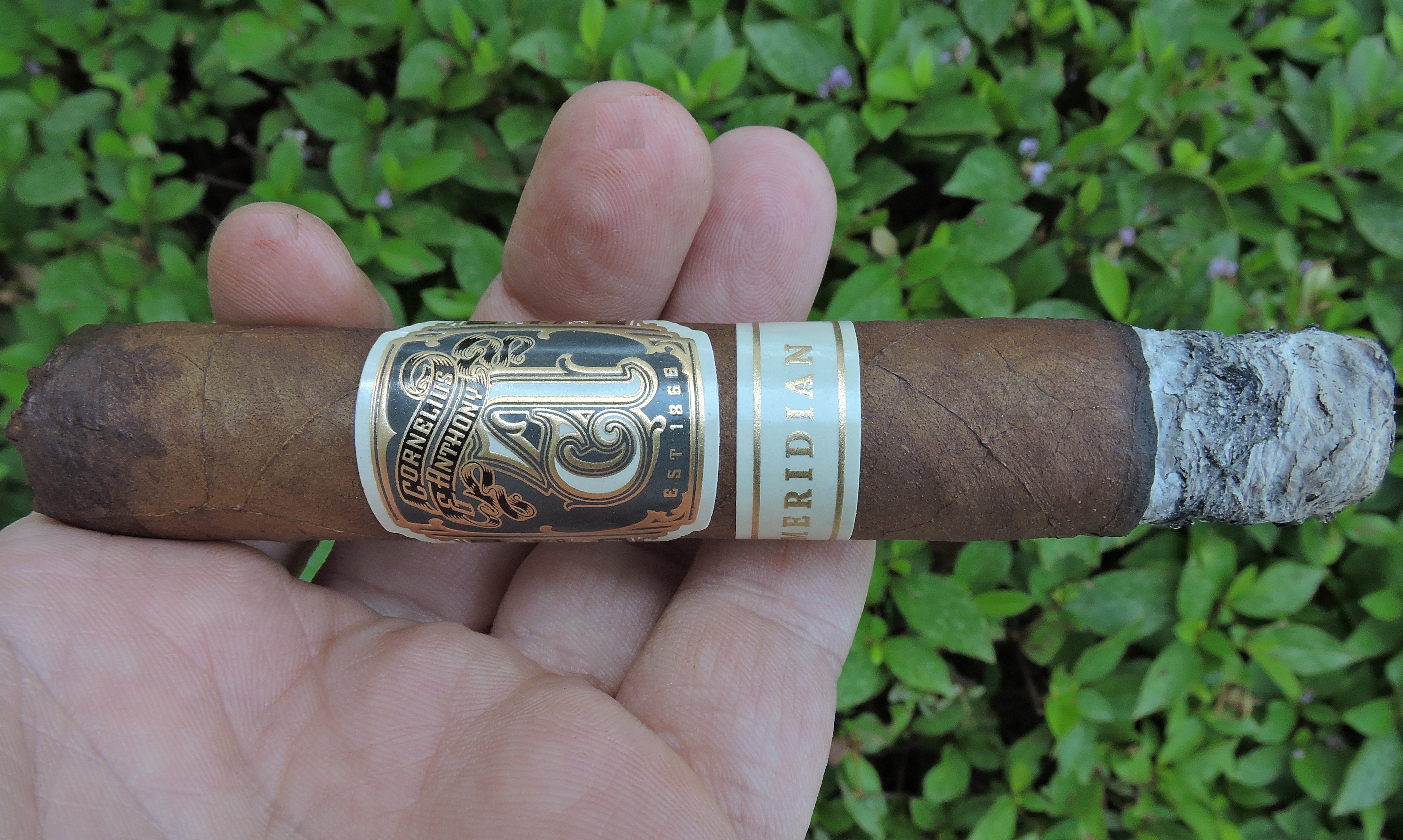 The Cornelius & Anthony Meridian was an interesting cigar. I’ve smoked a few of these over the past few months. While each of the Meridian cigars were certainly ready to smoke, I’ve found the additional time in my humidor had brought out a little more of the complexity this cigar has to offer. As I mentioned, the damp earth flavor might not be the most glamorous flavor, but it really works with this cigar and seemed to bring out the other flavors. This is a cigar I would recommend to either an experienced cigar enthusiast or a novice looking to “graduate” to something medium/medium to full. As for myself, this is something that I would smoke again and it’s worthy of a box split.

* Cornelius & Anthony is a sponsor of Cigar Coop