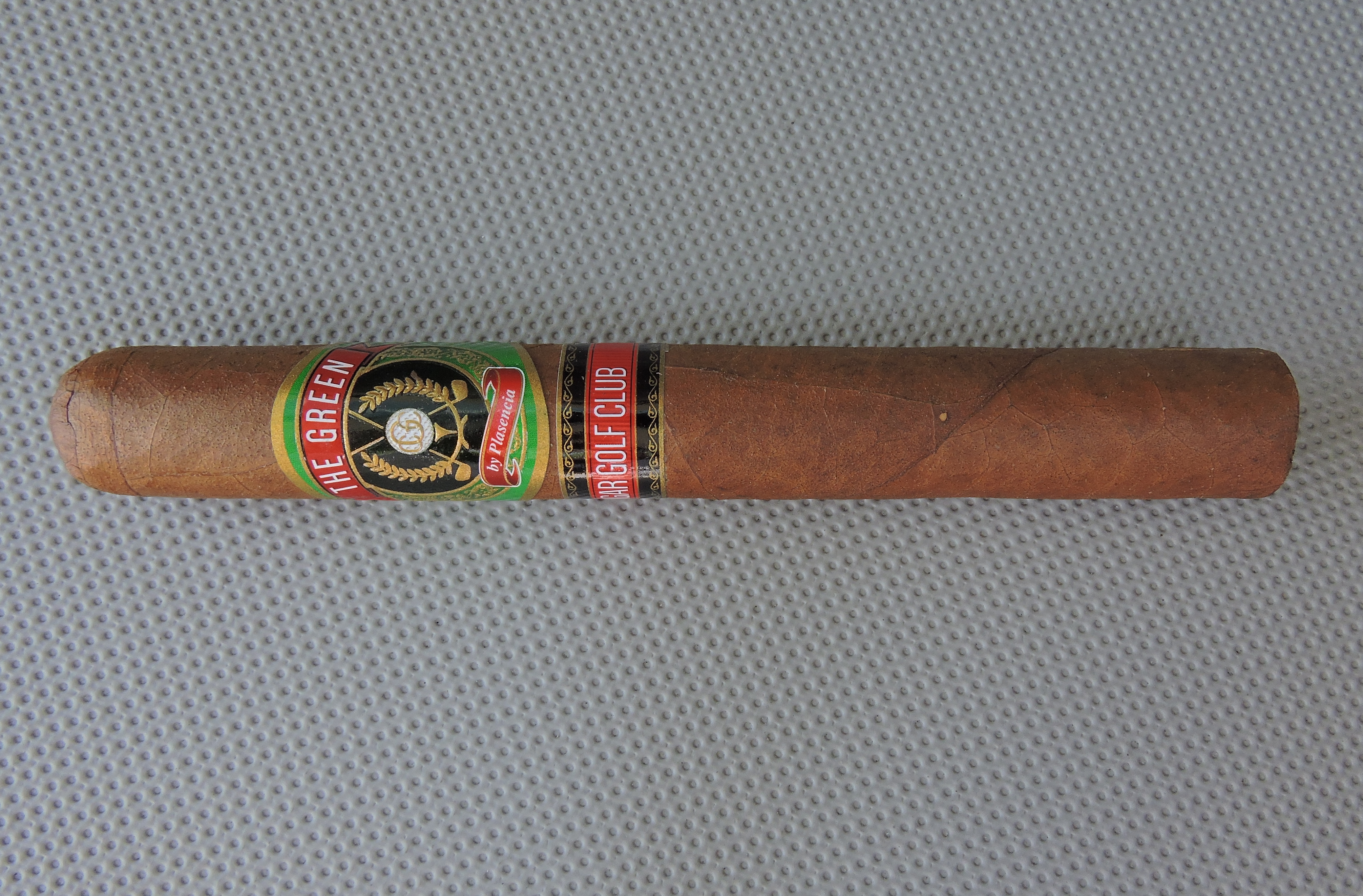 Today we take a look at another cigar in the the Cigar Golf Club line – The Green.  Cigar Golf Club is a line that comes from Alexandra Plasencia. The Plasencias are known as one of the iconic families in the cigar industry. With farming and factory operations in Nicaragua and Honduras as well as additional farms in Costa Rica and Panama, they have worked to produce cigars for many brands in the cigar industry. The Plasencias have also put their name on several cigars. Most notable releases in recent years have been the Don Sixto by Plasencia, distributed by General Cigar, and the Plasencia Organica distributed by Indian Head Cigars. Last year, the Plasencias took the next step – distributing their own branded cigars. Two separate ventures were formed – Plasencia 1865 and Cigar Golf Club. With the Plasencia 1865 brand, the company focuses on premium and ultra-premium lines, with the Plasencia Alma Fuente getting the most attention. As for Cigar Golf Club, as the name indicates, it is a line of cigars with the golfer in mind (and of course a golf theme). Today we take a closer look at one of the offerings under Cigar Golf Club, The Green.

Cigar Golf Club is taking two routes to market with the line. The first is by traditional distribution through retailers and the second is direct to consumer. One facet of the direct to consumer approach is a monthly subscription model where each month a consumer will receive a “Cigar Golf Club Box” – a sampler box containing one cigar of each of the five blends the Cigar Golf Club offers. The sampler is also available for standalone purchase.

The five blends each have a golf-themed name. These offerings include:

Without further ado, let’s break down Cigar Golf Club’s The Green and see what this cigar brings to the table.

The Green consists of mostly Nicaraguan tobacco with some Jamastran tobacco from Honduras in the filler. The cigar is produced in Nicaragua at the Plasencia factory.

Cigar Golf Club’s The Green is available in one size – a 6 x 50 Toro. The cigar is sold in singles or in the Cigar Golf Club box.

The Jalapa wrapper of The Green had a medium brown color with a rosado tint. There was a light coating of oil on the surface of the wrapper. This is what I considered this to be a smooth wrapper. There were some visible veins, and most of the wrapper seams were not noticeable.

There are two bands on The Green cigar. The primary band features a green, red, black, gold, and white color scheme. There is a white golf ball at the center of the band on a circular black background. The golf ball has the initials “CGC” in gold. Surrounding the ball are a gold wreath and two gold golf clubs. The remainder of the band is mostly green. Above the black background is a red ribbon with gold trim. On that ribbon is the text “THE DRIVER” in large white font. Below the black background is a smaller red ribbon with white trim that has the text “by Plasencia” in white trim. There are gold, adornments around the rest of the band. The left side contains the text “HAND MADE” in small dark font. On the right side is the text “NICARAGUA” – also in small dark font.

The secondary band has a large red stripe with black and gold trim across the top and bottom. On the center of the red stripe is the text “CIGAR GOLF CLUB” in large white font.

Prior to lighting the Cigar Golf Club Green, I went with my usual choice of a straight cut. After removing the cap, I proceeded with the pre-light draw. The cold draw delivered a mix of dusty earth, wood, and light fruit. Overall I considered this to be a satisfactory pre-light draw. At this point, I was ready to light up the Cigar Golf Club Green and see what the smoking experience would have in store.

The Cigar Golf Club Green started out with more notes of dusty earth and fruit. There was a metallic/mineral note in the background.  I found that metallic note to add an interesting dynamic to the flavor profile. Meanwhile, the retro-hale produced an additional layer of black pepper.

The first third saw the dusty earth and fruit notes alternate in intensity. During this time the black pepper note entered the equation and slowly started to increase in intensity. By midway point, the earth notes seemed to have a slight edge over the fruit notes. The pepper and metallic/mineral flavors remained in the background.

Construction-wise, the Cigar Golf Club Green was a well-constructed cigar and this reflected nicely on the score for the burn and draw. The cigar maintained a straight burn path. While there was a slight curvature on the burn line, this didn’t result in an excessive amount of touch-ups. The resulting ash was relatively firm with a silver-gray color. The burn rate and burn temperature were both ideal. 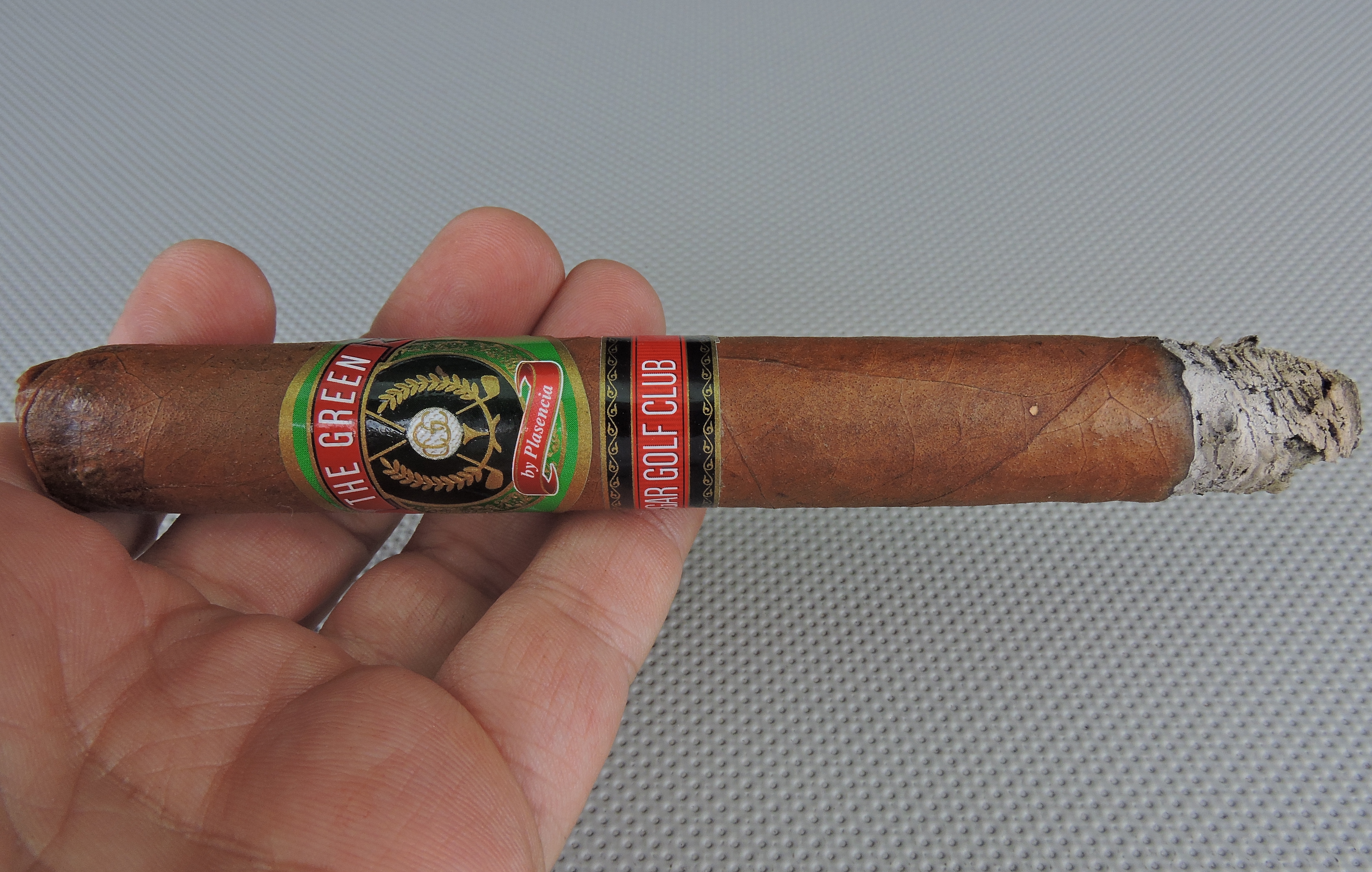 The draw was excellent as well. It wasn’t too tight, nor was it too loose. This cigar was relatively low maintenance to derive flavor from.

From both a strength and body perspective, the Cigar Golf Club Box started out medium. Both attributes increased gradually throughout the first two thirds of the smoking experience. By the last third, the strength remained medium while the body reached medium to full by the last third. For the most part, this is a cigar that maintained a good equilibrium – although the last third saw the body have a slight edge over the strength.

The other cigar I have smoked from Cigar Golf Club was The Driver. From a flavor and a complexity standpoint, I give the Driver a slight edge over the Green. The flavor profile of The Green was a little more unique, especially with the metallic/mineral note.  I thought The Green was an interesting and entertaining smoke during the first two thirds, but the last third was a lot less interesting. This is a cigar I would still smoke again. I’d still recommend others try one to smoke – whether you are a novice or experienced cigar enthusiast. At a price point starting out around $12.00, I would go for the Cigar Club Box sampler at $40.00 and get the cigar that way.