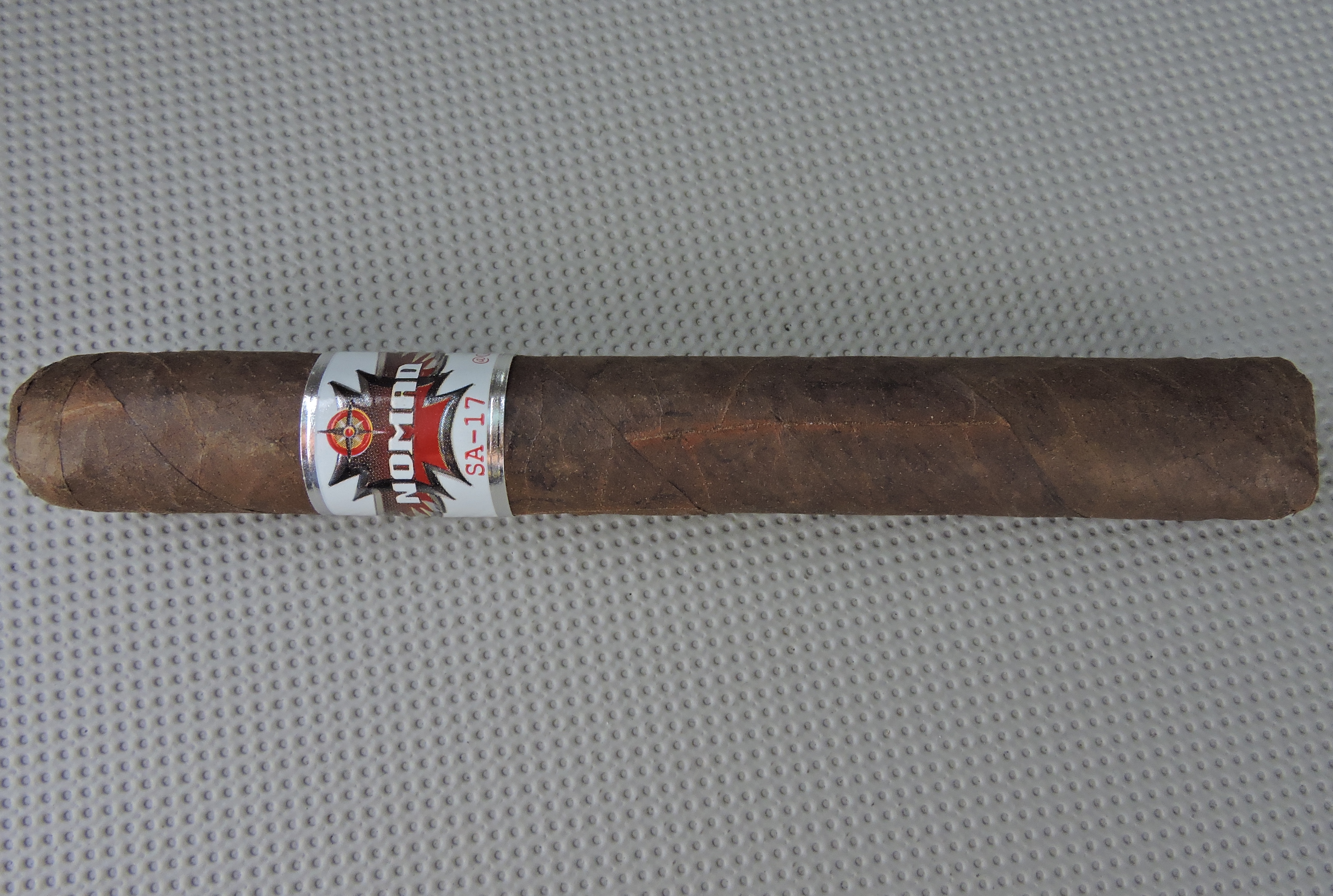 The Nomad SA-17 is the seventh regular production line to come from Fred Rewey’s Nomad Cigar Company. The name “SA” stands for “San Andres” and is named for the wrapper used – a Mexican wrapper from the San Andres region. The SA-17 became Nomad’s first San Andres regular production cigar, however, it is not the first San Andres wrapped cigar from Nomad. Back in 2015, Nomad created a shop exclusive release for Stogies World Class Cigars in Houston known as the Nomad H-Town San Andres Lancero. While the SA-17 and the H-Town releases each use the San Andres wrapper, the two are different blends from two different countries. Nomad is known for splitting its production between the Dominican Republic and Nicaragua.  The H-Town release is coming from the Dominican Republic, but the SA-17 comes from A.J. Fernandez’s Tabacalera Fernandez facility in Nicaragua. Today we dive closer look at the Nomad SA-17 in the Toro size.

The origins of the Nomad S-17 can be traced back to the release of Nomad’s Nomad C-276. The C-276 project was released in 2015. C-276 was a project of Rewey’s designed to offer a bolder offering in the Nomad portfolio released in 2014 – also out of the Tabacalera Fernandez factory. During the time C-276 was being developed, Rewey started experimenting with the San Andres wrapper and built a blend with that wrapper using the C-276 components as s starting point.

As with all of Nomad Cigar Company’s portfolio, the cigars are distributed in the U.S. market by Boutiques Unified.

Without further ado, let’s break down the Nomad SA-17 Toro and see what this cigar brings to the table.

In addition to the San Andres wrapper, the binder and filler in the Nomad SA-17 use all Nicaraguan tobaccos.

The Nomad SA-17 was first released in four sizes. Just before the FDA deadline for the implementation of FDA regulations around premium cigars, Rewey managed to introduce a fifth size into the market – a lancero. Each of the five sizes are packaged in 21-count boxes. 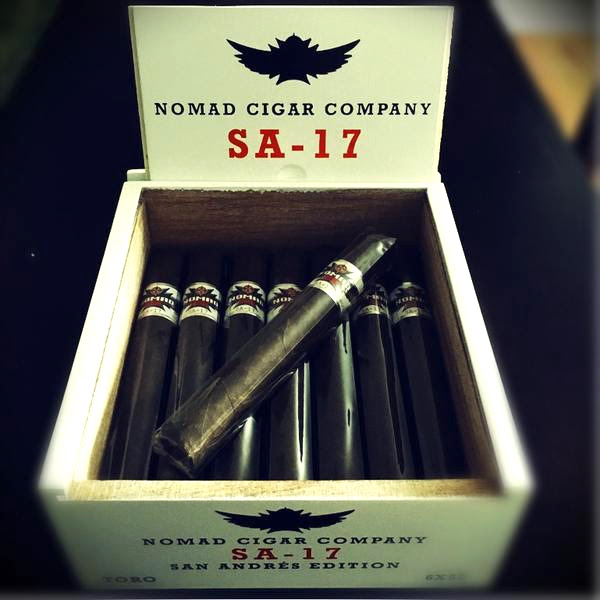 The San Andres wrapper of the Nomad SA-17 Toro has a rugged look to it. It has a roasted coffee bean color with some mottling on the surface. There was also a very light coating of oil on the surface. The wrapper had a slightly bumpy feel to it. There were some visible veins, but most of the wrapper seams are well hidden.

The band of the Nomad SA-17  is very similar to ones found on the Nomad S-307, Nomad C-276, Nomad Estelí Lot 8613, and Nomad Martial Law. Like those other bands, the SA-17 band features the red and silver Nomad winged logo with a navigator system symbol on top along with silver trim. The difference is that the SA-17 features a white colored background as opposed to the black one found on the other cigars. The SA-17 also features text “SA-17” and @GODFADR (which is Rewey’s Twitter handle) on the lower portion of the band – both in red font.

I commenced the cigar experience of the Nomad SA-17 Toro with a straight cut. After removing the cap, I proceeded with the pre-light draw phase. The dry draw was simple – delivering some notes of black coffee, cedar, and classic wood. Overall I considered this to be a satisfactory pre-light draw. At this point, I was ready to light up the Nomad SA-17 Toro and see what the smoking phase would have in store.

The start of the Nomad SA-17 Toro picked up where the pre-light draw left off where I got more notes of black coffee, classic wood, and cedar. In addition, there were some red pepper notes mixed in. Early on the black coffee moved into the forefront. The classic wood, cedar, and red pepper moved into the background. The cedar and red pepper provided a balance of sweetness and spice respectively into the flavor profile. There also was a layer of cedar on the retro-hale.

Toward the end of the second third, the red pepper notes made their way into the forefront. There were also some additional black pepper notes in the forefront. The final third of the Nomad SA-17 Toro saw the pepper notes primary and the black coffee notes receded into the background joining the cedar and classic wood. This is the way the flavor profile of the SA-17 Toro came to a close. The resulting nub was slightly soft to the touch and cool in temperature.

The burn of the Nomad SA-17 Toro had no trouble maintaining a straight path from start to finish. There was a slight bit of jaggedness on the actual burn line, but this was more cosmetic in nature and didn’t warrant much in the way of additional touch-ups. The ash itself was firm with a medium-gray color. The burn rate and burn temperature were both ideal. 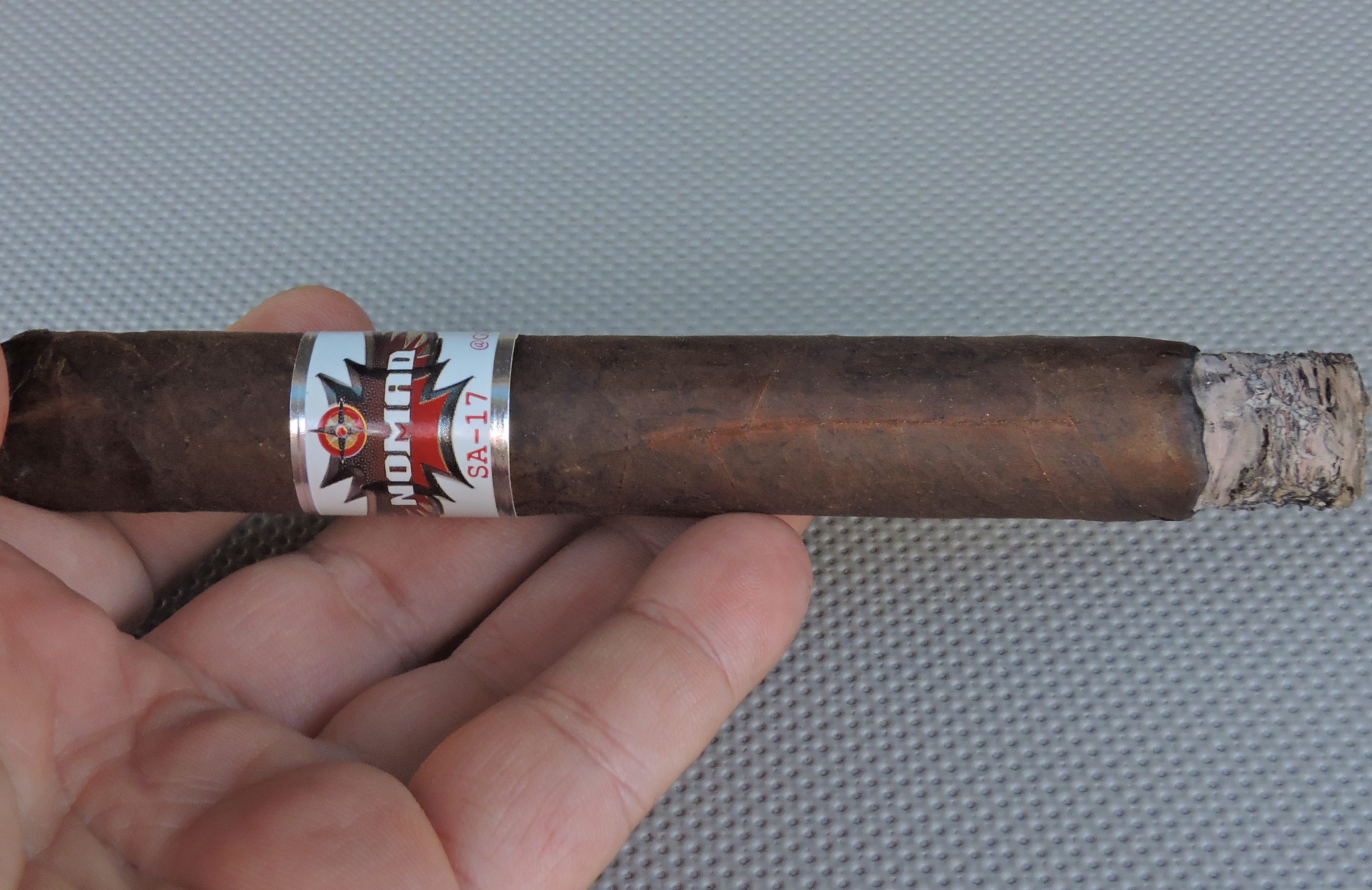 Burn of the Nomad SA-17 Toro

As for the draw of the Nomad SA-17 Toro, it was slightly more open than I preferred on each of the samples I smoked. This was not a bad draw by any means, but normally I do like a little more resistance.  This still was very much a low maintenance draw.

In terms of strength, the Nomad SA-17 Toro started out medium. There was a gradual and linear increase of strength and by the last third, the strength had crossed into medium to full territory. Meanwhile, the body also stated out in the medium range. There also was a linear increase in strength, but this was at a more rapid rate than the strength increase. By the last third, I found the Nomad SA-17 Toro was in the medium to full-bodied range. The SA-17 continued to increase in intensity and by the end was very close to full-bodied.

From a personal standpoint, my big knock on San Andres Mexican wrappers is that they can often overpower a blend and be very pungent. To some extent, Nomad SA-17 Toro is not immune to this as toward the latter stages of this cigar, some of the spices are going to be on the sharper side. However, I did find there was enough going with this cigar that it held my interest.  The other thing that worked in favor of this cigar is that it didn’t leave that lingering peppery taste on the tongue like many other spicy cigars do. As a result, I found this to be a very good cigar. It’s probably a cigar I’d steer to a more experienced cigar enthusiast but wouldn’t discourage a novice from trying – especially a novice wanting something with a spicy kick at the end. As for myself, it’s a cigar certainly worthy of purchasing multiples for the humidor – and deserves consideration for a box split.