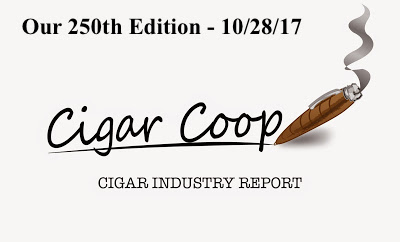 Feature of the Week: Milestone

Originally called Cigar Week Wrap, on January 19th, 2013 we launched a week in review on everything Cigar Coop and cigar industry related.  We’ve renamed it the Cigar Industry Report, but we have never missed a Saturday publishing. Today we are proud to publish the 250th consecutive week of this integral part of Cigar Coop. Thank you to our audience, partners, and sponsors for their support.

This week, we welcomed Fabian Ziegler of Drew Estate for Episode 27. In our Debonaire Ideal segment, we talked horror movies Finally, in our full Deliberation segment, we talked about Aaron Loomis’ article “When a 90 is a not a 90“.

We also had Prime Time Special Edition #15 where we welcome Jonathan Carney as our special guest.

Our shows are available on YouTube, Podbean, iTunes, Tune In Radio, and Google Play.

On this date October 28th…