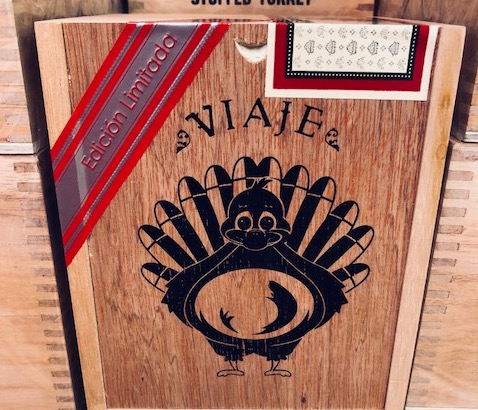 After a one-year hiatus, Viaje’s Thanksgiving seasonal release, the Viaje Stuffed Turkey, is making a return – but this year with a twist. This year’s version has been dubbed the Viaje Stuffed Turkey Edición Limitada and will feature box-pressed versions of the White Meat (Natural wrapper) and Dark Meat (Maduro) wrapper blends.

The Viaje Stuffed Turkey made its debut in 2011 as a Nicaraguan puro. Measuring 5 x 60, it also marked the company’s first 60 ring gauge cigar. It was originally released as a part of the “White Label Project” line. This line is a mechanism for Viaje to release experimental blends and sizes, factory errors, etc.

The new Viaje Stuffed Turkey Edición Limitada White Meat and Dark Meat versions feature the same tobacco components as previous versions, but use a different vintage of the tobaccos. Both blends are packaged in 25-count boxes.

At a glance, here is a look at the Viaje Stuffed Turkey Edición Limitada: