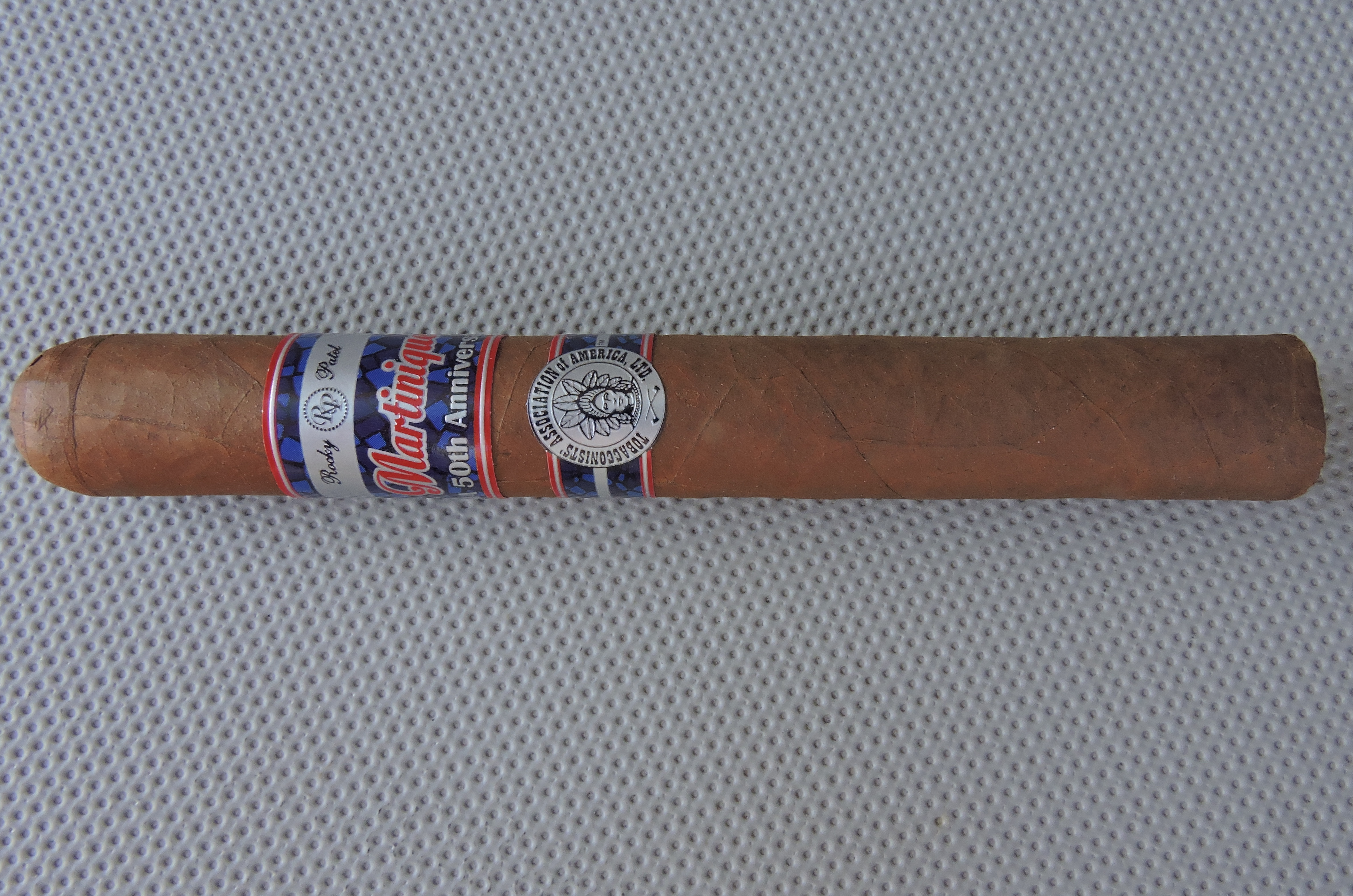 Very quietly, Rocky Patel Premium Cigars had its third release for the Tobacconists Association of America (TAA) called the Rocky Patel Martinique. While the TAA is not known to “press release” the exclusive cigars it carries, it did list the Rocky Patel Martinique on its list of 2017 TAA Exclusive Cigars on its website. As the TAA releases began appearing on shelves, this cigar was one of the harder ones to find, but I was able to obtain one. As it turned out, when I looked at the cigar it said “50th Anniversary”.  2018 will be the year the TAA celebrates its 50th anniversary. Given 2017 was actually the TAA’s 49th anniversary, I was able to connect the dots and infer this was a soft launch. As opposed to being a “one and done” release, the Martinique will be an ongoing annual release that is exclusive to the TAA. Today, we take a closer look at the Rocky Patel Martinique.

The TAA organization is a small group of retailers. At press time, the number of retailers is approximately 80.  The TAA has defined their mission statement as follows:

This year, the following new cigars have been released for the 2017 TAA Exclusive Series (displayed from left to right in the photo that follows):

As mentioned, the Rocky Patel Premium Cigars’ third release for the TAA.  The other releases include:

Without further ado, let’s break down the Rocky Patel Martinique and see what this cigar brings to the table:

The Rocky Patel Martinique a 100% Honduran puro made at Plasencia’s El Paraiso factory where Rocky Patel Premium Cigars handles a lot of its production.

The Rocky Patel Martinique is available in one size – a 6 x 52 Toro. The cigars are packaged in 10-count boxes.

The Rocky Patel Martinique’s Honduran wrapper was medium brown with a strong cinnamon colored tint to it. This was a smooth wrapper that didn’t have much in the way of oil on the wrapper. Any visible veins and any visible wrapper seams were on the thin side.

The secondary band also has a blue stained glass design with red trim. There is a silver stripe going horizontally across the middle of the band. At the center of the band is a silver circle containing the TAA logo in black font.

Prior to lighting up the Rocky Patel Martinique, I used a straight cut to remove the cap. After clipping the cap, it was on to the pre-light draw experience. The cold draw delivered a mix of dusty earth and classic wood notes – with a very slight hint of sweetness. Overall, this was not the most exciting pre-light draw, but since it is not incorporated into the score, there was no loss of points here. At this point, I was ready to light up the Rocky Patel Martinique and see what the smoking phase would have in store.

By the middle of the first third, the cedar notes became a constant a far as being a primary note. The dusty earth notes began to float in between the forefront and background. This continued into the second third. Just past the midway point, some classic wood notes surfaced in the background with natural tobacco and pepper. These classic wood notes began to increase in intensity.

As the Rocky Patel Martinique hit the final third, the classic wood and cedar notes were in control. While the Martinique had a woody profile for a good chunk of the cigar experience, it was now more dominant. Meanwhile, there still were touches of natural tobacco and pepper providing a little additional sweetness and spice. This is the how the cigar experience of the Rocky Patel Martinique finished up. The resulting nub from the cigar was slightly soft to the touch and cool in temperature.

When it came to the burn, the Rocky Patel Martinique had no problem maintaining a straight burn path. There was a slight bit of jaggedness from time to time, but this was more cosmetic and was easily remedied with a touch-up. The resulting ash had a salt and pepper color scheme. This wasn’t the most overly firm ash, but it was far from a loose or flaky one either. Meanwhile, the cigar maintained an ideal burn rate and had an ideal burn temperature. 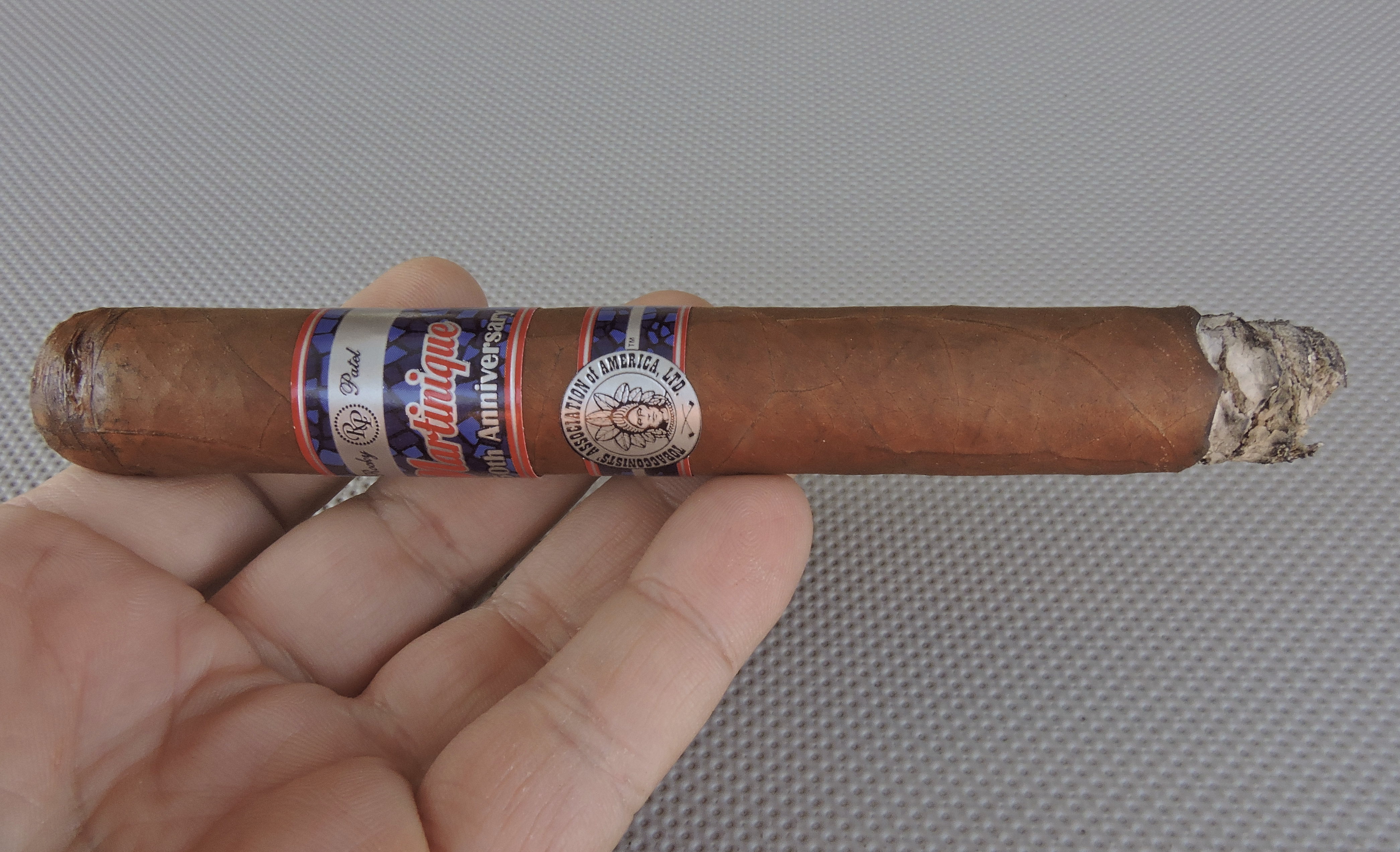 Draw-wise, the Rocky Patel Martinique performed quite well. It had a touch of resistance to it – which is something that I like. At the same time, it still was a low maintenance cigar to derive flavor from.

When it came to strength versus body, I found both attributes balanced each other nicely and neither overshadowed the other.

Typically I do not “chase” down a cigar to review, but because I want to review the TAA Exclusive Series in its entirety, the Rocky Patel Martinique was a cigar I made an extra effort to obtain. While it was listed on the TAA website, it was very difficult to find. It was even more disappointing that two TAA shops had no clue what I was even talking about when I inquired about this cigar. I understand the Martinique was probably released earlier in limited quantities as it is being positioned as the 50th anniversary of a cigar, but wouldn’t it have been easy to simply let the consumers know this?

As for the cigar, it does exhibit a lot of classic woody and earthy qualities of a Honduran puro. If you like that kind of profile, the Martinique is going to be a cigar for you. To me, the cigar lacked a “wow” factor, and that is something that I feel a TAA release should have. It’s a cigar I’d certainly recommend trying a sample of and seeing what you think. Hopefully, it will be easier to find as the 50th anniversary TAA Exclusive cigars go into wider distribution.