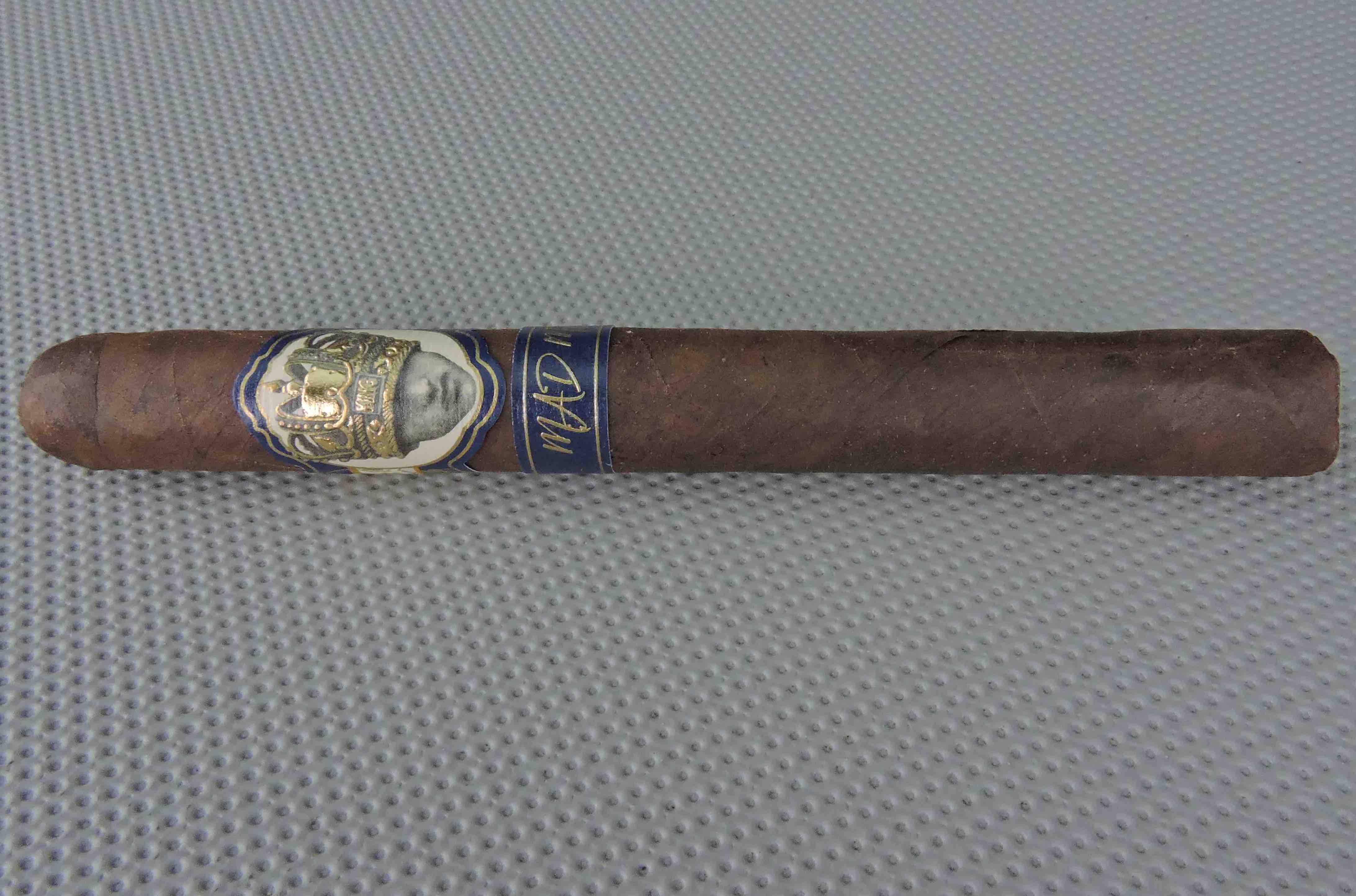 Without further ado, let’s break down the Long Live the King MAD MOFO Corona and see what this cigar brings to the table.

The blend to the Long Live the King MAD MOFO is a five-country multi-national blend. The cigar is highlighted by the use of a San Andres Mexican maduro wrapper. In addition, the blend uses a binder from Indonesia and fillers from the Dominican Republic, Nicaragua, and Pennsylvania. As with the offerings that fall under the “Caldwell Collection” umbrella, production is handled out of the Tabacalera William Ventura factory in the Dominican Republic.

Packaging of the Long Live the King MAD MF

The San Andres wrapper of the Long Live the King MAD MOFO Corona had a dark chocolate color. There was a light sheen of oil on it. The wrapper had a slight ruggedness that is often seen on San Andres wrappers. There were some visible wrapper seams and some thin visible veins present. The cigar itself was finished with a tiny pig-tail on the head.

There are two bands on the Long Live the King MAD MOFO. The primary band is a variation of the original Long Live the King band. It features the sketch of a young man with a large gold-colored crown on his head on an ivory-colored background. The sketch is surrounded by a blue frame with the text “CALDWELL” on the right side of the frame in gold font. The left and right side of the band has an ivory background with gold adornments above and below it. On the ivory-colored background is the text “Long Live” and “the King” in blue cursive font on the left and right side respectively. The band itself is finished with blue trim.

The secondary band rests just below the primary band. It is blue with gold pinstripes on the top and bottom. The sample we smoked still had the old t “MAD MF” name in a gold cursive font, but it has since changed.

The Long Live the King MAD MOFO Corona started out with a quick spurt of red pepper. This gave way to earth, cedar, and mineral notes. Shortly afterward a slight bittersweet cocoa note surfaced. As the Long Live the King MAD MOFO Corona moved through the early stages, the earth notes took a slight edge. The earth notes had somewhat of a musty component to it, which I found worked in favor of the .end.. Meanwhile the cocoa, cedar, mineral, and red pepper notes settled in the background. There was an extra layer of red pepper on the retro-hale.

Later in the first third of the Long Live the King MAD MOFO Corona, the cocoa notes began to increase in intensity. At the same time, a slight dried fruit note emerged in the background. These would join the musty earth note in the forefront. By the midway point, the cocoa became the primary flavor. Meanwhile, the musty earth, dried fruit, cedar, mineral, and red pepper remained in the background.

Toward the latter part of the second third, the musty earth notes returned to the forefront, joining the cocoa notes. Meanwhile, there was a slight increase in intensity from the pepper, but these notes didn’t reach the forefront. There still were subtle notes of dried fruit, cedar, and mineral present. This is the way the Long Live the King MAD MOFO Corona came to a close. There resulting nub was slightly soft to the touch and cool in temperature.

In terms of the performance of the burn, the Long Live the King MAD MOFO Corona performed quite well. This was a cigar that had no trouble maintaining a straight burn path. While there was some minor jaggedness from time to time on the burn line, this was cosmetic and the cigar did not require much in the way of additional touch-ups. The resulting ash had a light gray color. This wasn’t an overly firm ash, but it was far from loose and flaky. The burn rate and burn temperature were both ideal. 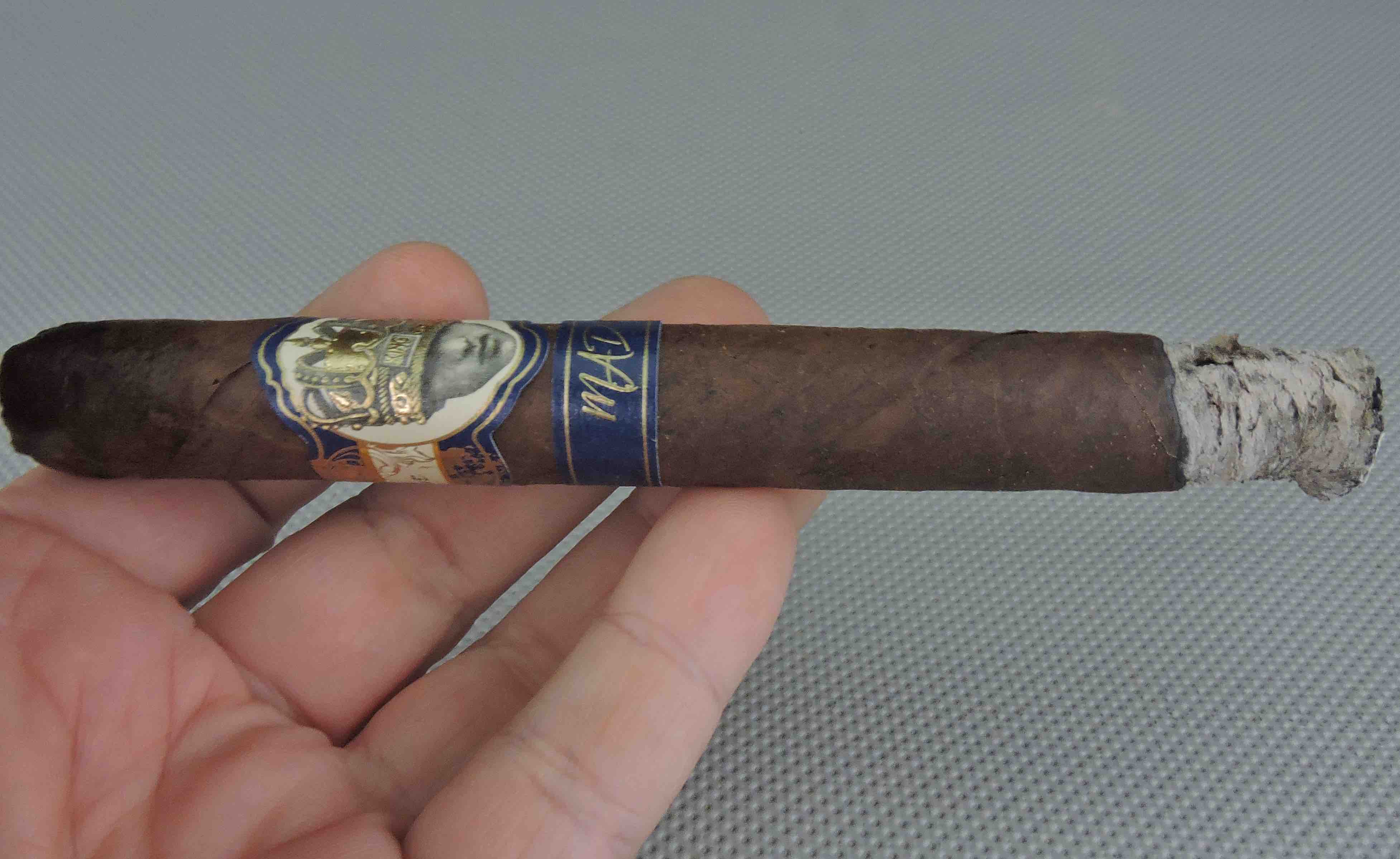 Burn of the Long Live the King MAD MF Corona

The draw to the Caldwell Long Live the King MAD MOFO Corona performed quite well. It had a pleasant touch of resistance to it. At the same time, this was a low maintenance cigar to derive flavor from and it still produced a decent amount of smoke.

While the original Long Live the King was one of the bolder cigars in the Caldwell Collection, the MAD MOFO Corona is actually somewhat dialed back. This cigar was in the medium strength, medium-bodied range from start to finish. There was a slight increase in the intensity of both attributes along the way, but in the end, the strength and body remained in the medium range of the spectrum.

In terms of strength versus body, both attributes balanced each other with neither attribute overshadowing the other.

The Caldwell Long Live the King MAD MOFO Corona delivered a very good smoking experience. It’s a cigar that performed well on flavor, complexity, and construction. While sometimes I think smaller ring gauge cigars are overrated compared to their larger counterparts, I did find the Corona size of the Long Live the King MAD MOFO was one of the better ones. This is a cigar I could recommend to a novice or experienced cigar enthusiast. As for myself, this is a cigar I would smoke again – and it’s one that certainly garners box worthy consideration.