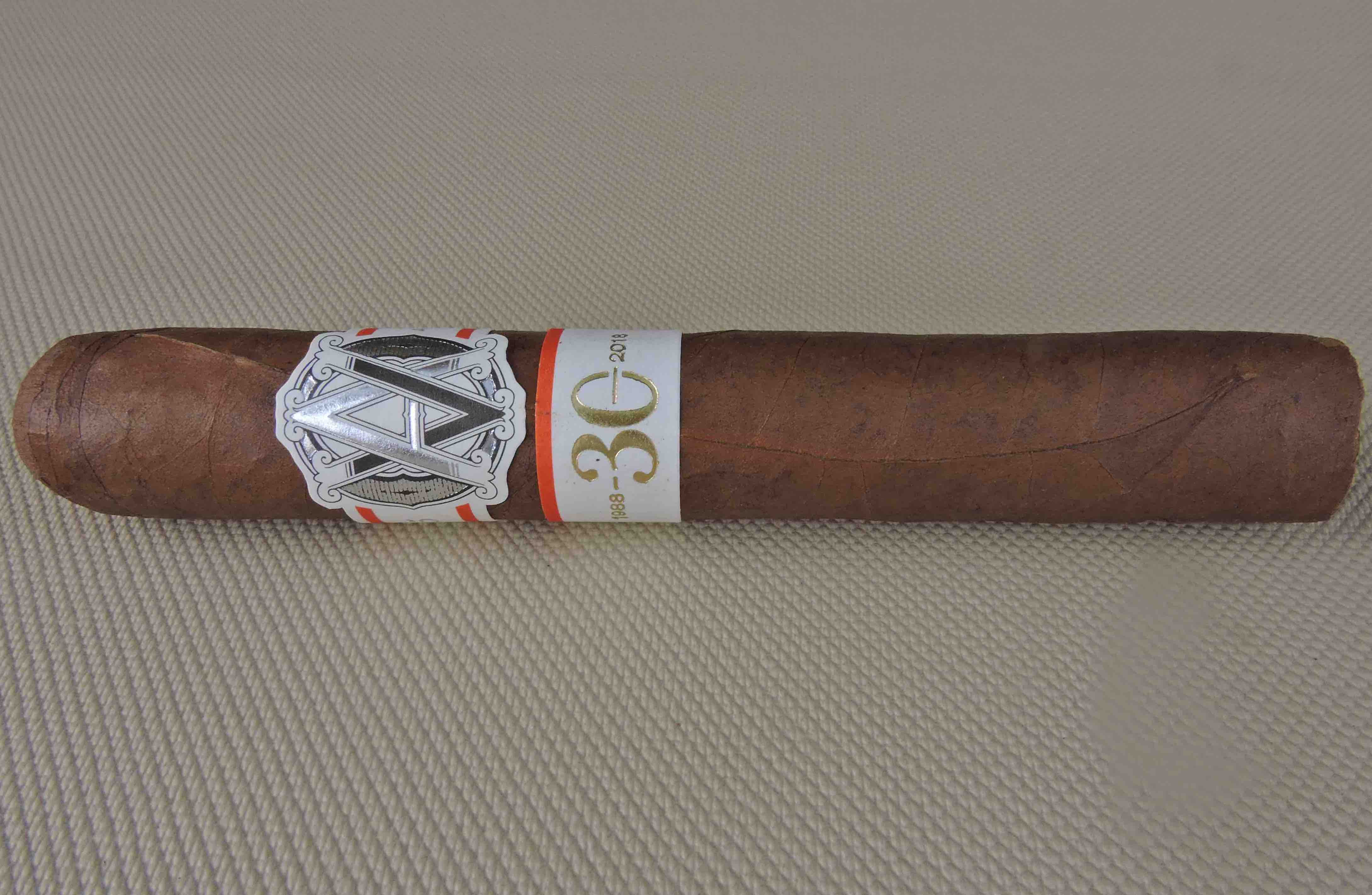 The AVO Limited Edition series has been one of the iconic annual limited edition releases in recent history in the cigar industry. One of the most sought after releases in the series has been 2005’s AVO LE05. Back in 2014, AVO Cigars released a sampler called AVO’s Greatest Hits. This was a sampler that contained the annual limited editions released from 2001 through 2014. One of the cigars that was not included in the sampler was the AVO LE05. At the time, Master Blenders Eladio Diaz and Henke Kelner could not re-create the blend up to the same standards as the original 2005 release, so it was left out. However the blend was worked on some more and after some time, the duo got the blend to a point where they deem it can be re-released. Therefore as a part of the AVO brand’s 30th anniversary, the cigar was re-released in 2018 as a limited release. Today we take a closer look at the AVO LE05 30 Years release.

The brand’s 30th-anniversary milestone was marked by a new limited edition release and the return of many classic lines – both limited and regular production. This included not only the AVO LE05, but 2002’s AVO 22. Below is a list of all of the offerings released for the 30-year celebration:

Without further ado, let’s break down the AVO LE05 30 Years release and see what this cigar brings to the table.

The AVO LE05 consists of an Ecuadorian wrapper over Dominican binder and filler. This is a cigar that is made at Davidoff’s O.K. Cigars factory.

The Ecuadorian wrapper of the AVO LE05 30 Years had a dark Colorado red color to it. The surface of the wrapper had a light sheet of oil. The wrapper was slightly bumpy with some thin visible veins and some visible wrapper seams.

While there was no band on the original AVO LE05, there are two bands on the AVO LE05 30 Years. The primary band uses a style similar to what has been seen on previous AVO releases following the 2015 revamping of the band. This band features a white background with orange pinstripes near the upper and lower part of the band on the sides. On the center of the band is a black and silver colored AVO logo. To the right is the text “AVO UVEZIAN” in silver font. To the left is the text “LE 05” – also in silver font.

The secondary band is a ring that is being used across all of the releases that are a part of the AVO 30th series. The band has an antique white color with an orange pinstripe along the lower edge. There is a large gold colored 30 on the center of the band. A small gold colored 1988 and 2018 flank each side of the 30.

A straight cut was used to commence the cigar experience of the AVO LE05 30 Years. Once the cap was removed, it was time for the pre-light draw. The dry draw of the cigar delivers a mix of natural tobacco, cocoa, and earth notes. I deemed this a very good pre-light draw. At this point it was time to light up the AVO LE05 30 Years and see what the smoking experience would have in store.

The AVO LE05 30 Years started out with a mix of natural tobacco, chocolate, earth, grass, and a slight amount of black pepper. Early on, the natural tobacco and chocolate notes progressed into the forefront. The earth, grass, and pepper notes settled into the background. As the cigar experience progressed through the first third, there were some additional chocolate notes on the after-draw. There was also an additional layer of black pepper on the retro-hale.

During the second third, the natural tobacco notes remained grounded in the forefront. The chocolate notes receded into the background and became less prominent on the after-draw. By this point, there was a coffee bean note that had surfaced. Throughout the second third, the coffee bean occasionally surfaced in and out of the forefront. Meanwhile, the pepper, earth, and grass remained in the background.

The final third of the AVO LE05 30 Years saw the natural tobacco remain grounded as the primary flavor with the coffee bean notes still surfacing in and out of the forefront. The pepper notes developed a little more intensity on the tongue and retro-hale, but never became overpowering. Most of the chocolate notes had dissipated, but there still were touches of grass and earth. This is the way the AVO LE05 30 Years came to a close. The resulting nub was cool in temperature and firm to the touch.

While there was a slight curvature on the burn line, the AVO LE05 30 Years still had an excellent burn. This was a burn that never was in danger of having an uneven burn path. The resulting ash was skewed toward the firmer side. The ash itself had a salt and pepper colored complexion. Meanwhile, the burn rate and burn temperature were ideal. 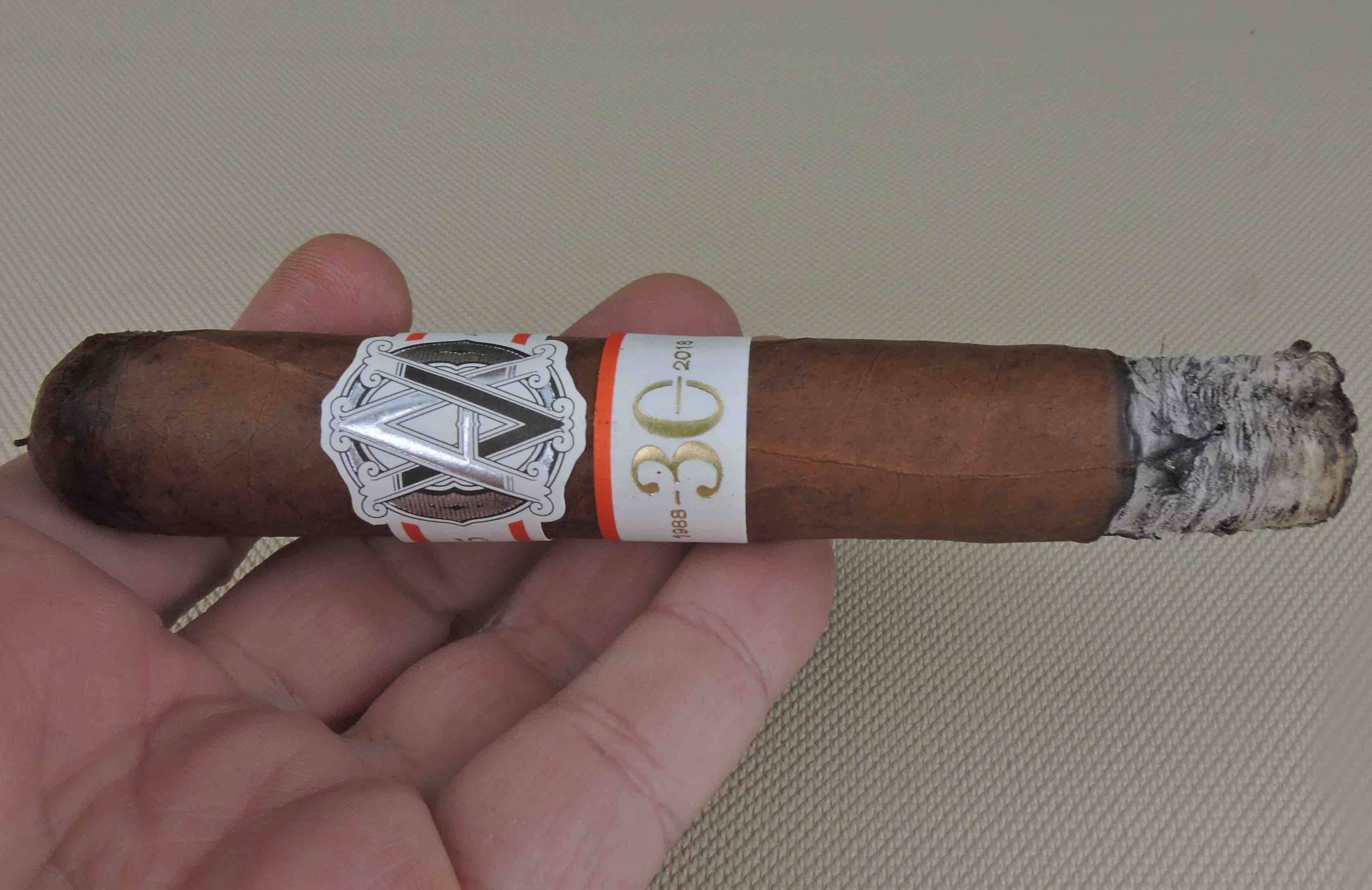 The draw to AVO LE05 30 Years had a nice equilibrium between openness and resistance. In the end, this was a cigar that was low maintenance in terms of being able to derive flavor.

In terms of strength, the AVO LE05 30 Years maintained medium strength from start to finish with little variance in the intensity level. As for the body, this was a cigar that also started out medium. By the last third, there was just enough of a bump in the depth of the flavors to push the AVO 30 Years into medium to full territory.

When it came to looking at strength versus body, the body maintained an edge throughout the smoking experience.

One thing I was not able to assess with the AVO LE05 30 Years was how this compared to how this smoked to the original release. While I never smoked the original, it still would be almost impossible to smoke one of the 2005 releases with this 2018 one. This is because the 2005 would have a lot of aging on it. While I still would be the AVO LE10 as the best of the AVO Limited Edition releases, I can confidently say the LE05 30 Years is one of the releases that belongs in the upper echelon of the series. This is a cigar that I could recommend to either a novice or experienced cigar enthusiast. As for myself, this is a cigar I would smoke again, and it garners box worthy consideration.