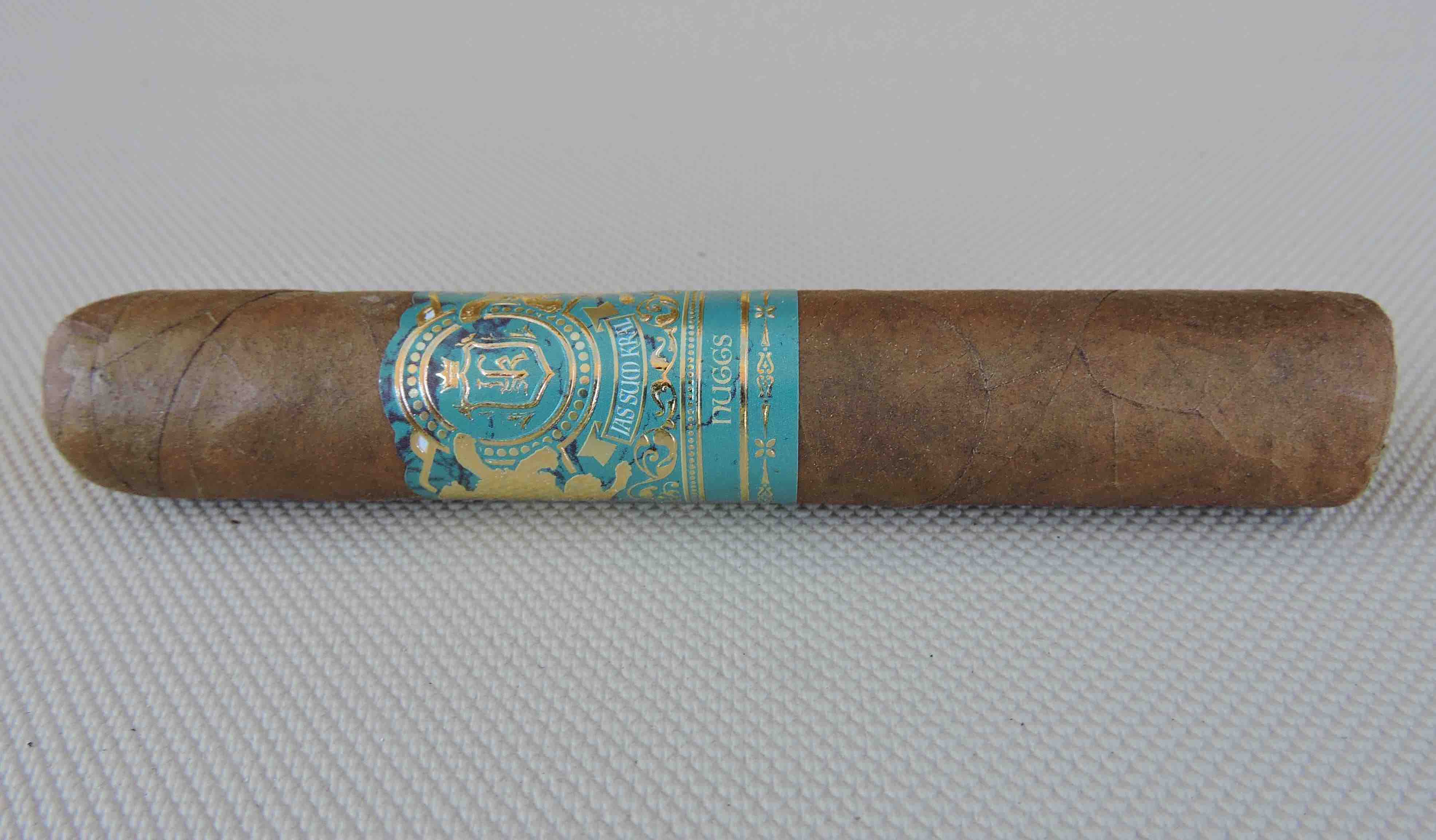 Jas Sum Kral (JSK) Cigars is the brand founded by Riste Ristevski. The company launched a little over three years ago and built up a very loyal following during this period. Last year was a significant year of change for JSK. First, Ristevski announced he was moving production to the Tabacalera de Aragon factory in Estelí, Nicaragua. Later that year, he decided to end selling direct to consumers and now focus his distribution to brick and mortar retailers. Also late in the year, Ristevki announced he had plans to bring a CBD infused offering to market called Jas Sum Kral Nuggs in both a Habano and Maduro blend. This past April, the Jas Sum Kral Nuggs Habano was released to market (the maduro is slated for later this year). Today we take a closer look at the Nuggs Habano in the Short Robusto format.

As for the name “Nuggs”, there is a play on the name in that a “nug” (short for nugget) refers to a piece of a cannabis plant – it is sometimes called the flower.

Nuggs is not unique in terms of being a CBD infused cigar. Companies such as Al Capone, Tranquilo Cigar by The House of Lucky Cigar. and Flowers of the Earth CBD. However the JSK offering is one that is being positioned as a premium cigar offering/ The cigars are rolled at Tabacalera de Aragon and then the infusion process takes place in Colorado. JSK worked with a lab to develop a proprietary solution said to be effective in absorption at the buccal mucosa (inside of the mouth). A total of 20 mg of CBD is infused into the Nuggs cigar. Ristevski mentioned on the Cigar Coop Prime Time Show that infusion amounts may be done on future releases.

The blend itself consists of an Ecuadorian Habano wrapper over an Indonesian binder and all Nicaraguan fillers.

Currently the Jas Sum Kral Nuggs Habano is available in one size – a 4 1/2 x 50 Robusto. The cigars are available in 25-count boxes.

The Ecuadorian Habano wrapper of the Jas Sum Kral Nuggs Habano was on the lighter side. On one of the samples it almost looked like a darker Connecticut Shade cigar. Upon closer examination, there was some subtle mottling on the surface the wrapper. The wrapper had a very light sheen of oil on it. This was a wrapper on the smoother side with some visible veins on the thin side. There were also some visible wrapper seams.

The band is highlighted by a green and gold foil color scheme. At the center of the band is a gold shield with the initials “JSK” in a classic style gold font (the J and S are stacked on top of each other with a larger k to the right). Above the shield is a gold crown. Below the shield is a green ribbon with the text “JAS SUM KRAL” in white font. Two gold lions surround the shield to the left and right. The remainder of the band contains mostly gold adornments on the green background. The text “NUGGS” is on the lower part on the band in gold font. There is gold foil on the far left and far right of the band.

The cigar experience of the Jas Sum Kral Nuggs Habano commenced with a straight cut to remove the cap. After the cap was detached, it was on to the pre-light draw ritual. The cold draw delivered a mix of citrus,  earth, and a slight amount of chocolate chip sweetness. Overall this was a satisfactory pre-light draw. At this point, it was time to light up the Jas Sum Kral Nuggs and see what the cigar experience would bring to the table.

Out of the gate. the Jas Sum Krul Nuggs Habano delivered a mix of earth, citrus, cedar, and chocolate chip cookie. The citrus and chocolate chip cookie note delivered a subtle layer of sweetness. Early on the cedar, citrus, and earth became the primary notes. The cedar component diminished into the background leading the citrus and earth notes. As the first third progressed, the citrus and earth notes alternated in intensity in the forefront. There was a layer of black pepper on the retro-hale as well.

As the Nuggs Habano moved into the second third, while the citrus and earth continued to be the primary notes, it was clear the citrus component now had a significant edge. Meanwhile some black pepper emerged on the tongue. There was also a touch of floral that surfaced. Both the black pepper and floral settled in the background joining the cedar and the subtle chocolate chip cookie note.

The last third saw the citrus in full control. The sweetness that was present in the citrus earlier had developed a more of an acidic quality. There were still notes of cedar and black pepper present. The floral and chocolate chip cookie components had now dissipated. This is the way the Jas Sum Kral Nuggs Habano came to a close. The resulting nub was cool in temperature and slightly soft to the touch.

Overall the Jas Sum Kral Nuggs Habano was a well-constructed cigar and this was reflected on the burn and draw. The burn had no problem maintaining a straight burn bath or a straight burn line. This wasn’t a cigar that needed anything above a normal number of touch-ups. The resulting ash was overly firm, but it wasn’t loose nor flakey either. The burn rate and burn temperature were ideal. 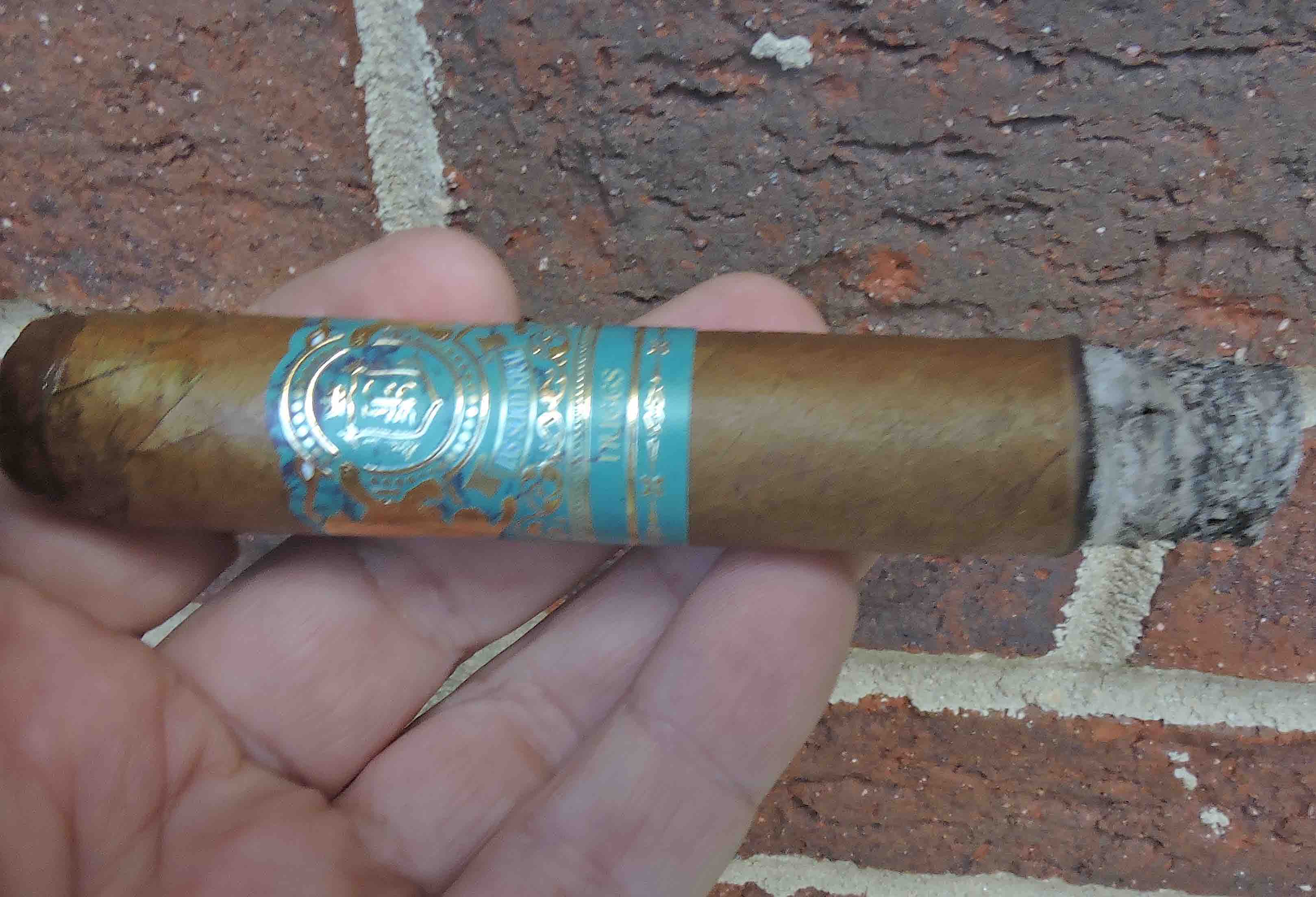 The draw to the Jas Sum Kral Nuggs Habano maintained a nice balance of resistance versus open-ness. This cigar was a low maintenance cigar to derive flavor from. It also produced a nice amount of smoke.

The JSK Nuggs Habano is not a powerbomb when it comes to strength. It’s a cigar that pretty much is mild to medium from start to finish. At the same time, it produces flavors on the lower end of medium-bodied. There wasn’t a lot of variance in the strength and body from start to finish. In terms of strength versus body, I gave the edge to the body.

While this cigar’s assessment is focusing around cigar performance and not the effects of CBD delivery, I do want to comment here on this cigar’s milder profile. In my opinion, delivering a powerbomb of strength and body does seem to fly in the face of getting some of the healing and relaxation benefits of CBD, so I think going with a milder blend was the right call.

I’ve been very impressed with what Ristevski has done in a short time in the industry. There is no doubt he can make a good cigar, and I give him credit for what he has done with the Jas Sum Kral Nuggs. As mentioned up front, there is evaluating this cigar’s performance, and evaluating the CBD effects it has. The latter category is not something I’m qualified to assess, so I’m going to focus on performance.

Taking the CBD component out of the equation, I see an average performing cigar. It delivered some nice flavors for most of the experience, but did not have a “wow” factor (at least from a tobacco flavor standpoint). Again, not a bad cigar, but not a better cigar than JSK’s Red Knight, Crna Nok, and Zlatno Sonce. Given the processes involved with this project, it’s not a cheap cigar as its priced at $12.00. In the end, looking at the straight smoking performance of this cigar, I would be inclined to recommend one to try this cigar first and see what one thinks. I’m certainly game to try the maduro version when it comes out and see how it performs.