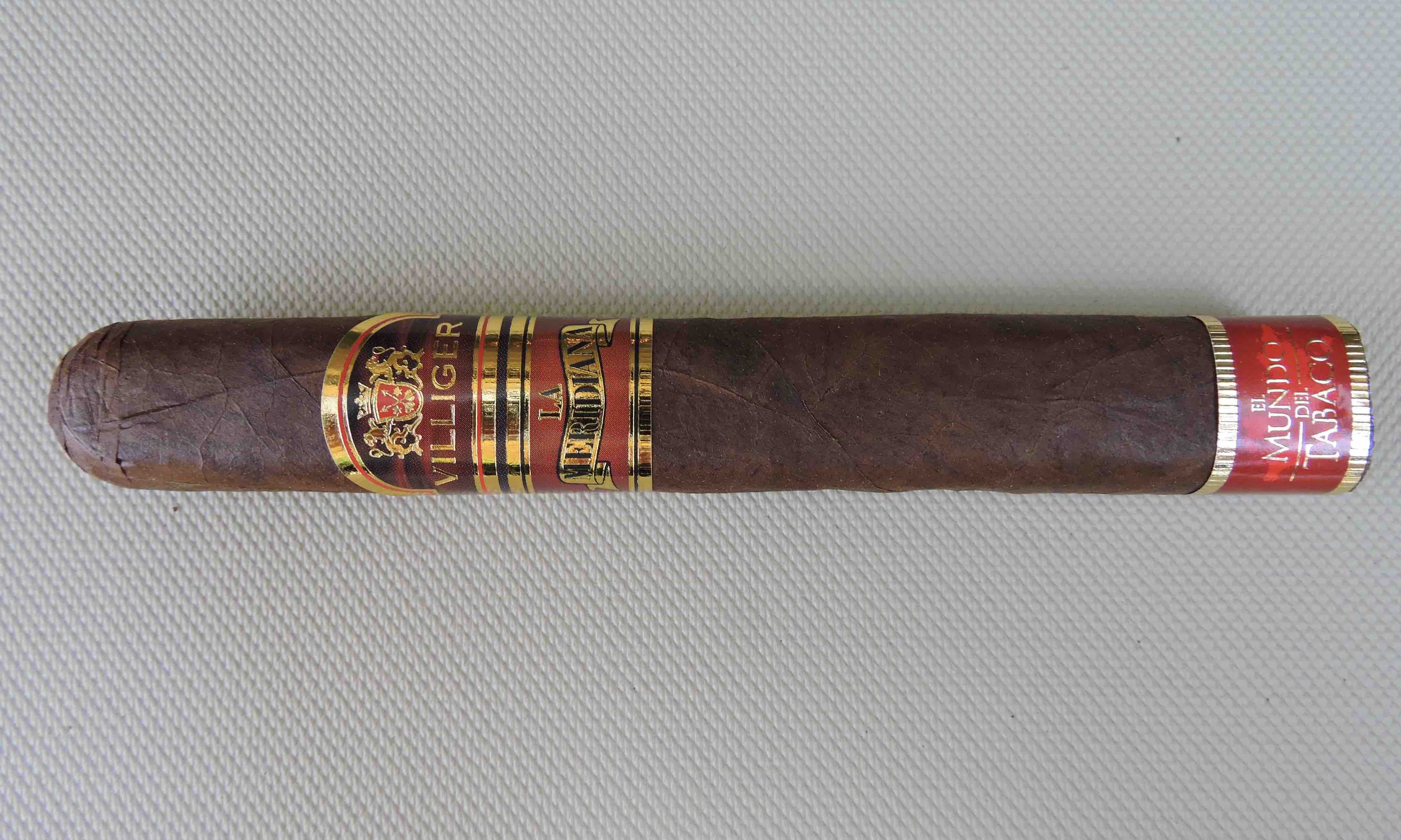 Back at the 2018 IPCPR Trade Show, Villiger Cigars North America was quietly showcasing a cigar at its booth known as La Meridiana. The Villiger La Meridiana is a cigar line that had already been successful in the European market, and the plan was for a widespread release of La Meridiana into the U.S. market in 2019. Keeping to schedule, Villiger started shipping La Meridiana to its retailers this past March.

La Meridiana is another collaboration coming from Villiger and the Joya de Nicaragua factory with the U.S. release following up the success of Villiger La Vencedora. Today we take a closer look at the Villiger La Meridiana in the Toro Box Pressed size.

The name La Meridiana pays homage to a 19th century Cuban factory owned by Pedro Murias called La Meridiana Fabrica de Tabacos de Pedro Murias. Murias was one of the leading cigar makers of the 19th century. The unrest in Cuba during the 1898 war of independence put Murias into financial trouble and he eventually was forced to sell the factory. On several trips to Cuba, Villiger Chairman Heinrich Villiger became intrigued with the name and tradition of the factory and eventually decide to make a brand to pay homage to it.

Without further ado, let’s break down the Villiger La Meridiana Toro Box Pressed and see what this cigar brings to the table.

As mentioned, the Villiger La Meridiana comes out of the Joya de Nicaragua factory in Nicaragua. The cigar itself consists of 100 percent Nicaraguan tobaccos, but the specifics about those tobaccos are not disclosed.

The Villiger La Meridiana comes in five sizes. Each is presented in 10-count boxes. The cigars are rounded, except for the Toro Box Pressed we are talking about today.

The Nicaraguan wrapper of the Villiger La Meridiana Toro Box Pressed had a dark Colorado reddish hue. The wrapper itself also had a light sheen of oil on it. The wrapper itself was smooth with any visible veins and wrapper seams on the thin side. The cigar itself had a classic trunk-press style.

The Villiger La Meridiana has two bands. The primary band of La Meridiana uses a similar banding design to what has been used on several other recent Villiger releases, but with a different color scheme. The upper part of the band has a rust-colored background with a gradient effect (darkening to the left and right) surrounded by gold and red trim. The center portion of the band has a semicircle shape to it. Sitting on that semicircle is the Villiger coat of arms – and just below that is the text “VILLIGER” in gold font.  Gold and black striping divide the upper section of the band from the lower part. The lower part of the band also has a rust-colored background with a gradient effect as well as gold trim. Sitting on that portion of the band is a gold ribbon-design with the text “MERIDIANA” in black font. Above the ribbon is the text “LA” in gold font.

The secondary band rests around the footer. This band has a red-colored background with a gradient effect (again darkening to the left and right). There is gold trim on the upper and lower portion of the band. On that band is the text “EL MUNDO DE TABACO”. This makes reference to a subsidiary of Villiger that was used to import non-Cuban premium cigars. Eventually, this subsidiary became a part of the Villiger Söhne GmbH company.

A straight cut was used to remove the cap from the Villiger La Meridiana Toro Box Pressed. After the cap was removed it was on to the pre-light draw ritual. The cold draw delivered a mix of earth, cream, and mixed fruit sweetness. This was a very good pre-light draw experience. After removing the footer band of the Villiger La Meridiana Toro Box Pressed it was time to move on to the smoking phase.

The start of the Villiger Meridiana picked up where the pre-light draw left off as there were more notes of earth, cream, and mixed fruit. In addition, there were some black pepper notes. The earth and cream notes became primary early on. The pepper and fruit settled into the background. In particular, the spices settled into the distant background. Meanwhile, the retro-hale produced an extra layer of black pepper and earth.

The last third saw the cream notes in the forefront dissipate. The natural tobacco moved into the forefront joining the earth notes. There still were notes of pepper and fruit in the background. This is the way the Villiger La Meridiana Box Pressed Toro came to a close. The resulting nub was firm to the touch and cool in temperature.

The Villiger La Meridiana Toro Box Pressed had a slightly wavy burn line, but overall had no problem maintaining a straight burn path. This was a cigar that did not require an excessive amount of touch-ups. The resulting ash was on the firm side. This was an ash with a silvery gray color with a slight amount of dark streaking to it. Meanwhile, the burn rate and burn temperature were ideal. 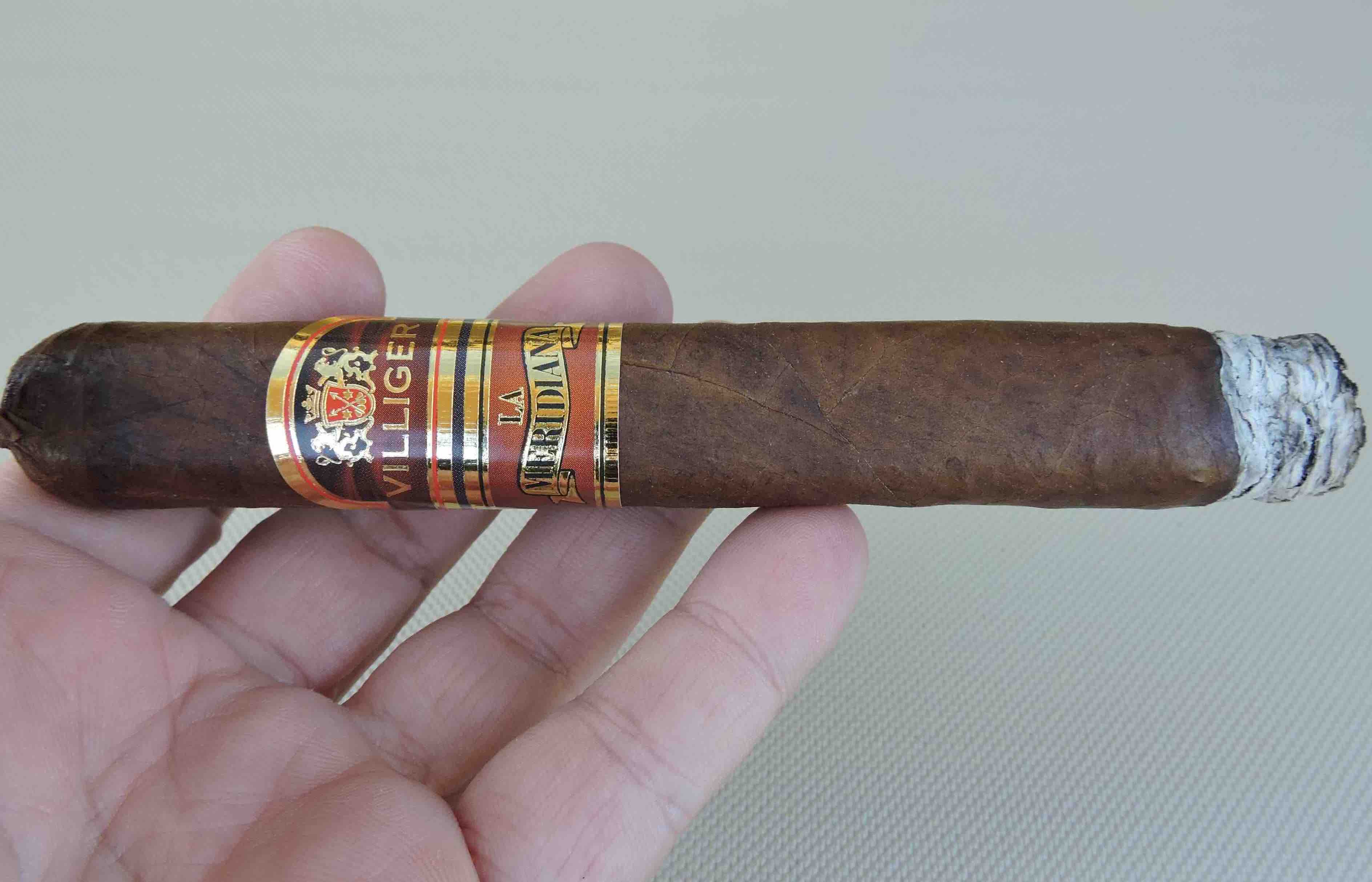 The Villiger La Meridiana Box Pressed Toro had an excellent draw. Sometimes a box pressed cigar can have too loose a draw, but no such case with the La Meridiana as it had an ideal balance of openness and resistance. Deriving flavor from this cigar was a low maintenance task.

While it might sound cliché, the best way to describe the Villiger La Meridiana Toro Box Pressed is that it is an elegant and refined smoke. Strength and body-wise I would expect a cigar like this to be in Villiger’s profile. However, it’s also a great example of a cigar that shows that Nicaraguan puros do not need to be full throttle power bombs. It’s a cigar that also intrigues me in how it smokes in the parejos and what longer term aging will do to it. I could recommend this smoke to any cigar enthusiast. As for myself, this is a cigar I would definitely smoke again – and it’s one I’d have no problem purchasing again.