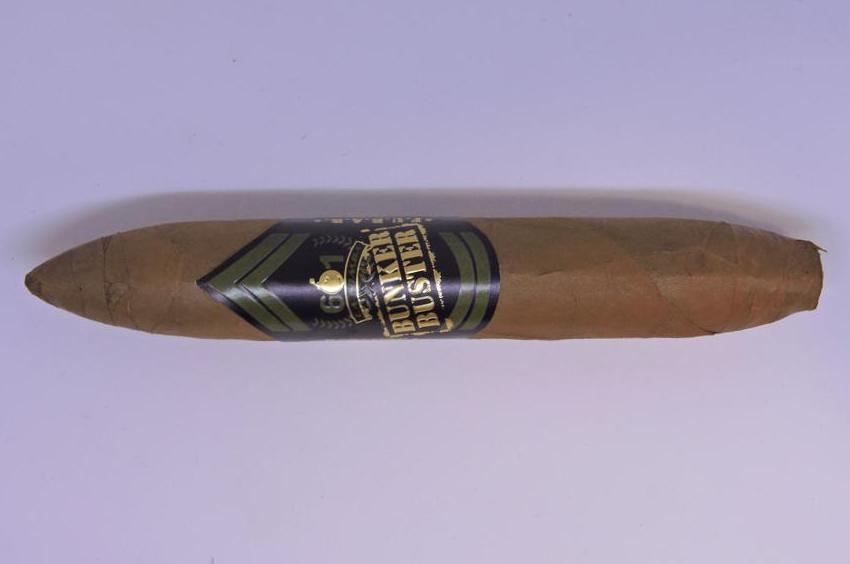 While Smoke Inn lists 14 installments, there have actually been 16 releases in the MicroBlend Series. This is because the Padron SI 15 release had two blends (a natural and maduro), and the Tatuaje Anarchy was re-released in 2015.  For completeness, we list all of the blends here.

The term FUBAR has origins in the military. The UBAR part stands for “Up Beyond All Recognition.” As for the F, Erik Espinosa Jr. of Espinosa Cigars commented in a press release, “I’ll let smokers connect the dots.”

In addition to the Ecuadorian Connecticut wrapper, the 601 La Bomba Bunker Buster FUBAR features a Nicaraguan binder and filler. The cigar is produced out of Erik Espinosa’s La Zona factory.  It’s actually the third MicroBlend Cigar to come out of La Zona, joining the original Bunker Buster from 2014 and the MoyaRuiz Hand Gripper released earlier this year.

The FUBAR is only the second MicroBlend to use a Connecticut wrapper. The other was the Smoke Inn 20th Anniversary from Davidoff. 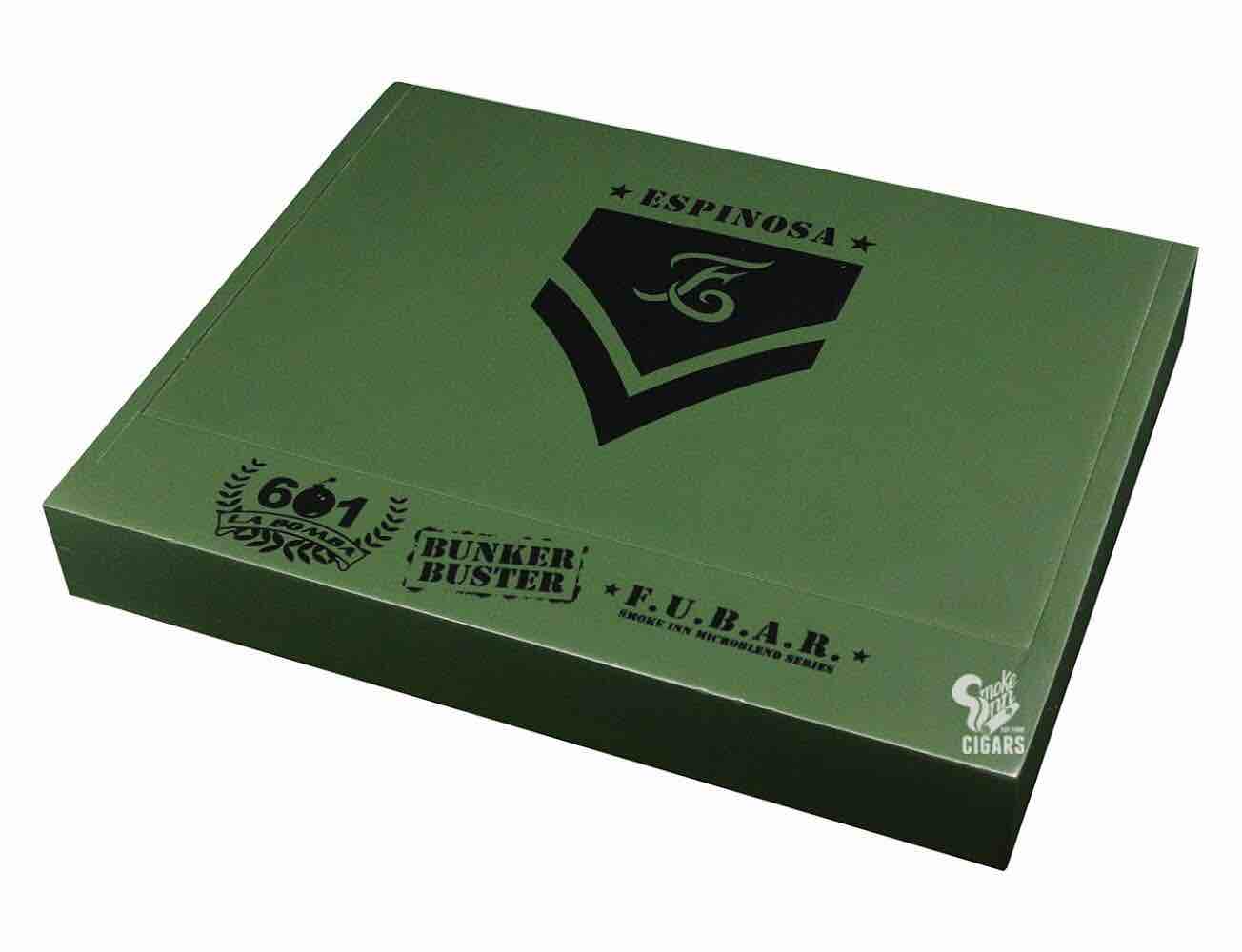 The Ecuadorian Connecticut Shade wrapper is a shade or two darker than a traditional light brown Ecuadorian Connecticut wrapper. There are some visible veins as well as some thin visible wrapper seams. The perfecto has a gentle taper leading to a nozzle-shape on the footer. The footer is open. Toward the head of the cigar, there is a steeper taper closing with a pointed tip.

This is the only entry in the La Bomba series to not use a footer band. The band is army green in the shape of an army insignia – featuring an army green background and black insignia stripes. The 601 La Bomba logo is on the upper center part of the band. This features the “601” with a bright gold-colored bomb in the middle. There is a black ribbon with the text “LA BOMBA” in small gold font. Below the logo is the text “BUNKER BUSTER” is a gold “stamped” font – arranged on an angle. On both the left and right side is an army-green and black insignia arranged in landscape mode. The 601 logo (all in gold) is on the left with the text “ESPINOSA above it. On the right is a gold Espinosa logo with the text “F.U.B.A.R.” in gold font above.

Each cigar is packaged in a paper coffin. There are four different designs on each side of the paper coffin. When the paper coffins are placed side by side, it reveals a full-piece of artwork. Rotating the cigars will showcase each of the four designs. 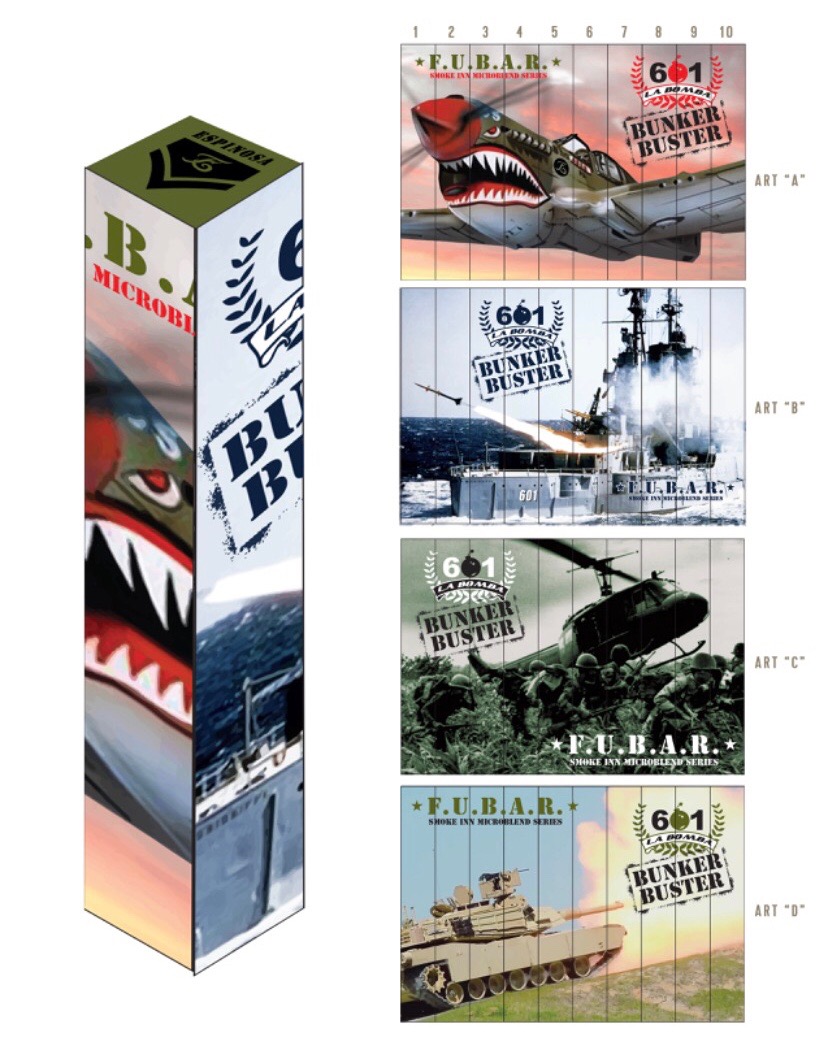 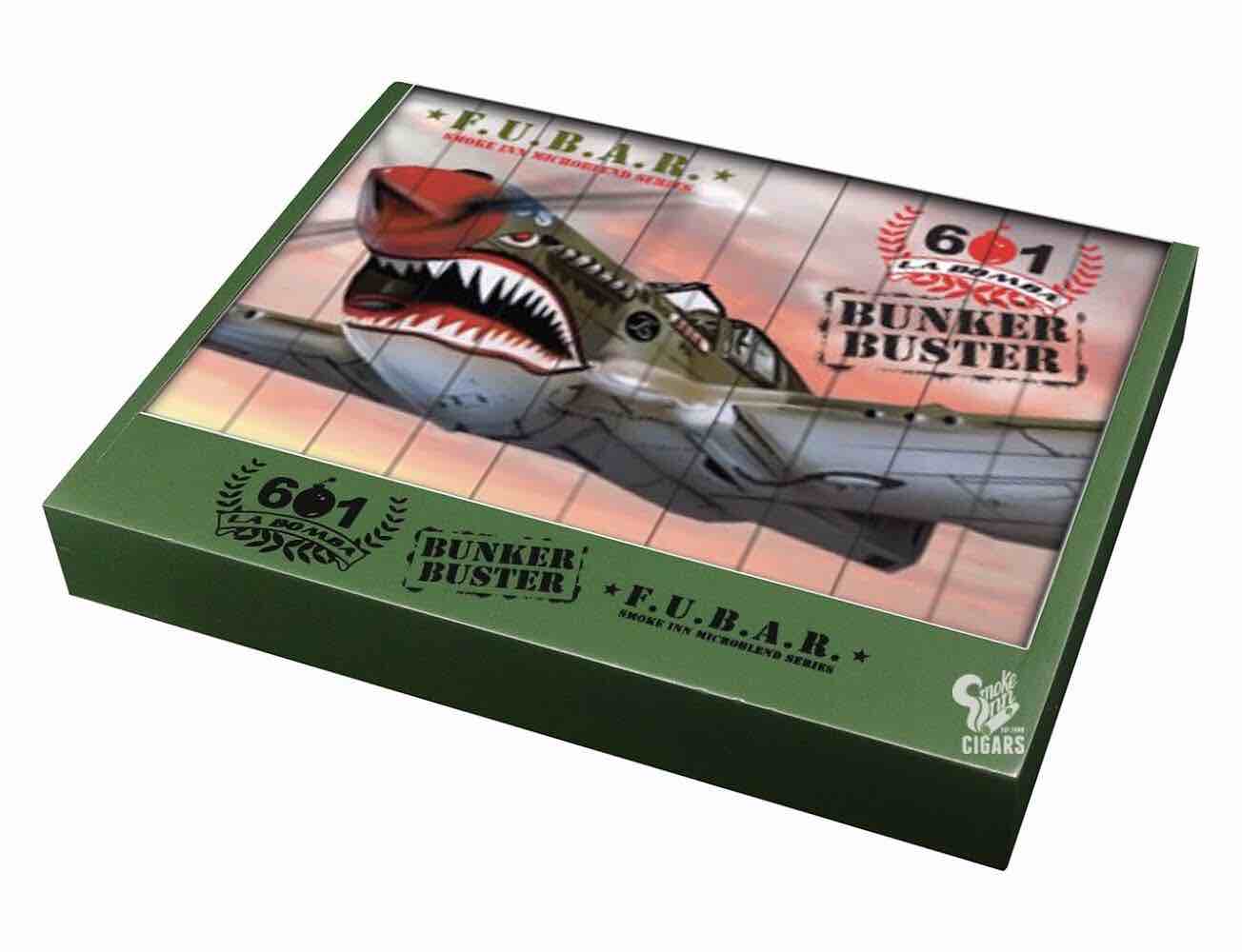 A straight cut was used to commence the smoking experience of the 601 La Bomba Bunker Buster FUBAR. The Credo Special T cutter with the 36 ring gauge hole was used in order to get an ideal cut and take advantage of the tapering. Once the tip was removed, it was on to the pre-light draw. The cold draw delivered a mix of cream, wood, and light citrus. I didn’t find this to be the most exciting pre-light draw, but since the pre-light draw is not scored, there was no loss of points here. At this point, it was time to light up the 601 La Bomba Bunker Buster FUBAR and see what the smoking phase would have in store.

Later in the first third, the wood notes moved into the forefront pushing the cream into the background with the pepper and burnt berry notes. As the FUBAR moved through the second third, the wood notes took on more of a cedar quality. The burnt berry and cream notes decreased in intensity. By the end of the second third, both the berry and cream notes had completely dissipated.

The last third saw mostly notes of cedar and wood in the forefront with some of the black pepper notes in the background. The cedar was not very aggressive and contributed both sweet and spicy qualities to the flavor profile. This is the way the 601 La Bomba Bunker Buster FUBAR came to a close. The resulting nub was firm to the touch and cool in temperature.

Overall the burn for the 601 La Bomba Bunker Buster FUBAR performed very well. While there was a slight curvature on the burn line, the cigar maintained a straight burn path from start to finish and was never in danger of getting off track. The resulting ash was silver-gray in color. This was the firmest ash, but it wasn’t a loose or flaky ash either. As for the burn rate and burn temperature both were ideal. 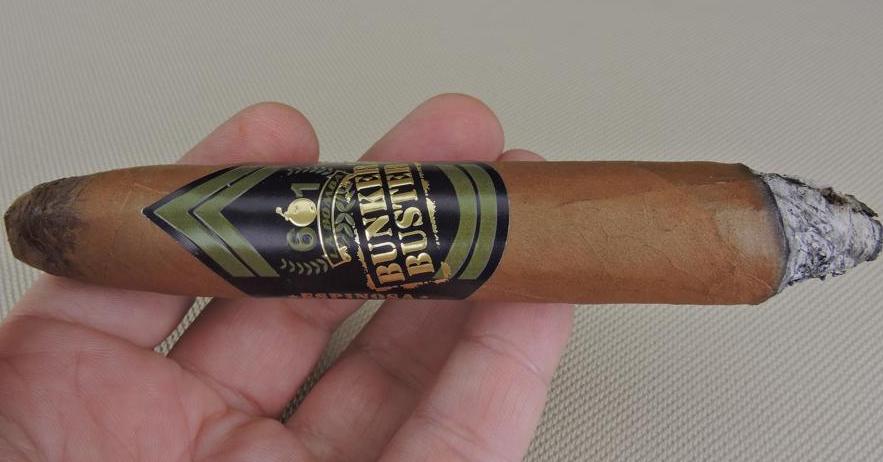 The draw of the 601 La Bomba Bunker Buster FUBAR also performed quite well. There was a touch of resistance – which is something I like. As the same time, the tapered part of the cigar was not constricting in allowing the smoke and associated flavors to flow.

From both a strength and body perspective, this is going to be much bolder compared to traditional Connecticut Shade cigars. This is a cigar that started out medium strength and progresses to medium to full-strength in the second third. In terms of body, FUBAR is going to deliver medium to full flavors from start to finish.

When looking at strength versus body, I gave a slight edge to the body throughout the smoking experience.

A lot of times when I hear about a strong Connecticut Shade cigar, it either isn’t as strong as advertised, or it lets me down in the flavor department. With the 601 La Bomba Bunker Buster FUBAR, for the most part this cigar is in the medium to full range for a good chunk of the smoking experience – making it a stronger Connecticut Shade cigar in my book. Flavorwise, while I felt the FUBAR did lose some steam in the final third, it came through with flying colors for the first two-thirds of the smoking experience. I felt the recent Hand Gripper (that also came from La Zona) was a let-down, no such case with the FUBAR. The MicroBlend Collection has been one of the more elite shop exclusive collections over the years – and the FUBAR is certainly a worthy candidate. Since this is a stronger Connecticut Shade, I would recommend this to a more seasoned cigar enthusiast. As for myself, this is a cigar I would smoke again – and buy multiples for the humidor.