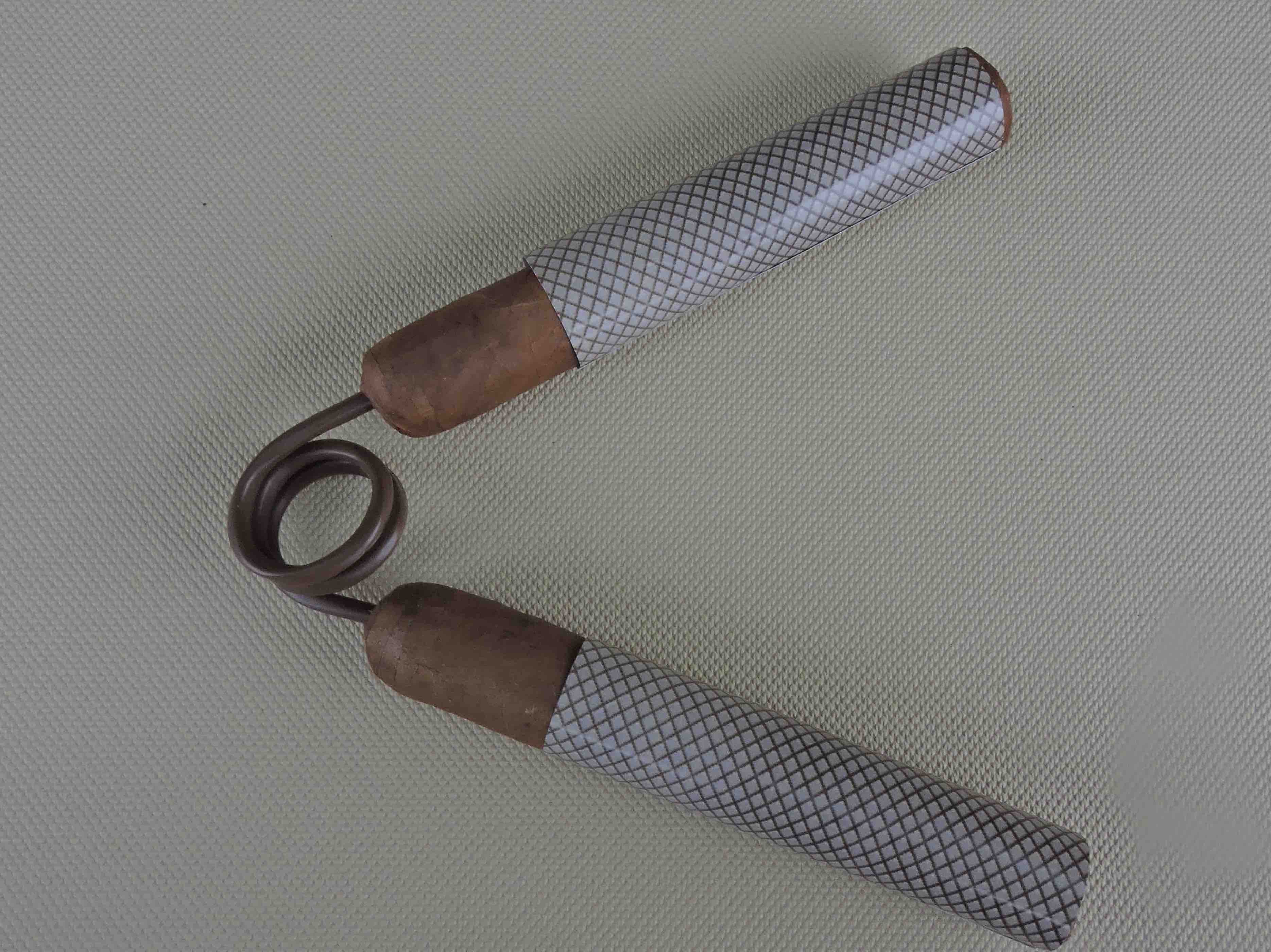 Late in 2018 came word that MoyaRuiz Cigars would be producing a cigar for South Florida retailer Smoke Inn’s MicroBlend Series known as the Hand Gripper. The project is not only the most unique entry to the MicroBlend Series, but it’s also a unique cigar in general. The cigar features two cigars connected together to resemble a flexing hand gripper. It is also the first release for MoyaRuiz Cigars since 2017’s Il Ridutto release. This limited release project is the start of what MoyaRuiz says will be a series of small batch limited projects it has planned for the future. The cigar was announced on the November 3rd edition of KMA Talk Radio and was officially launched at Smoke Inn’s Great Smoke event. Today, we take a closer look at the MoyaRuiz Hand Gripper.

Connecting two cigars together is not new for MoyaRuiz Cigars. Back in 2014 the company made La Jugada Nunchuck – which had two cigars connected together representing a pair of nunchucks. MoyaRuiz owns the patent on the Nunchuck cigar concept. While the Nunchuck was connected with a stem of tobacco, the Hand Gripper is connected with a coiled wire. Perhaps the most impressive thing is that not only does the Hand Gripper look like an actual hand gripper, but it also flexes like one as demonstrated in the video below.

At press time, Smoke Inn was including an actual Hand Gripper device with a box purchase. 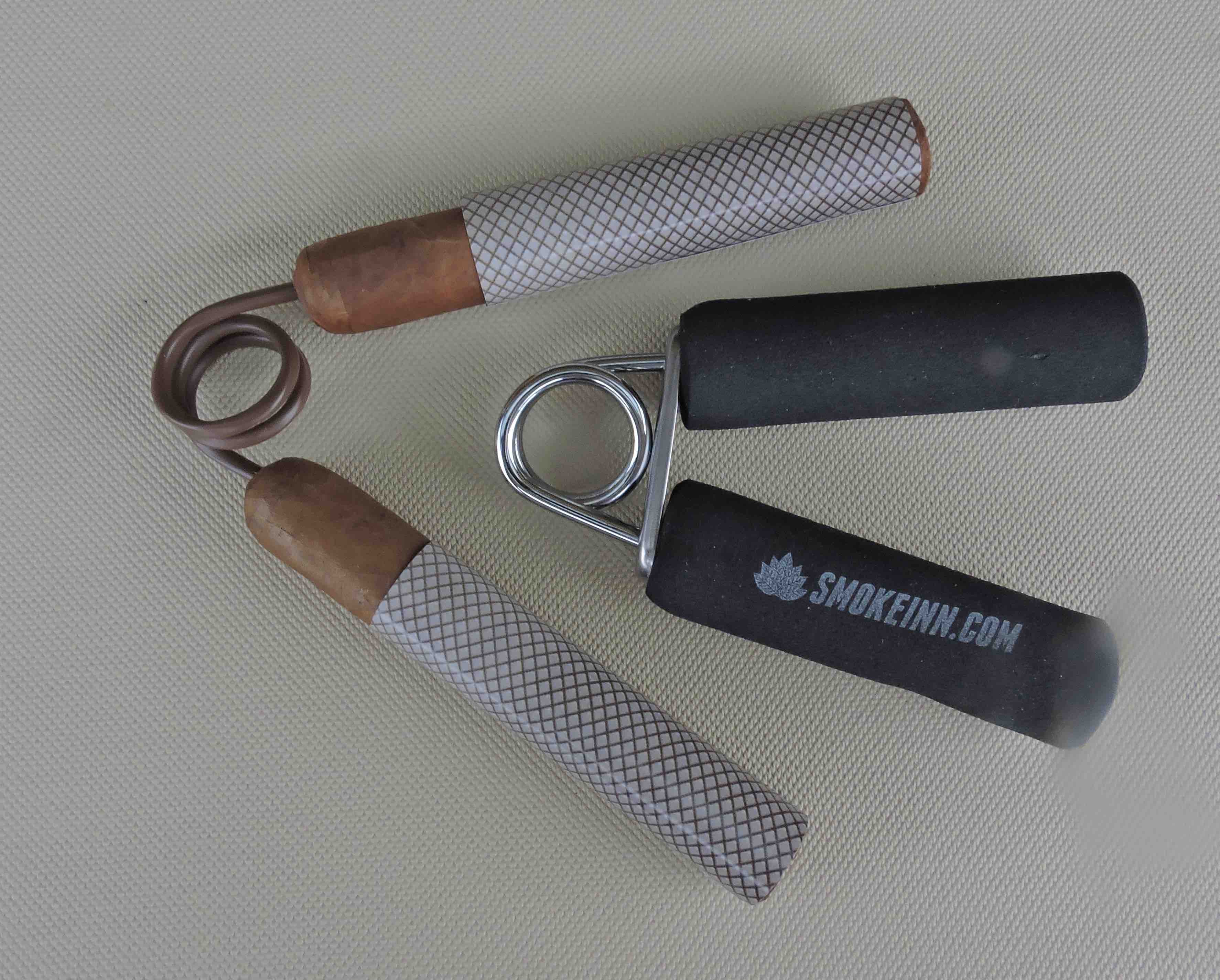 While Smoke Inn lists 13 installments, there have actually been 15 releases in the MicroBlend Series. This is because the Padron SI 15 release had two blends (a natural and maduro), and the Tatuaje Anarchy was re-released in 2015. For completeness, we list all of the blends here.

For historical purposes, here is a look at the SmokeInn MicroBlend Series installments:

Without further ado, let’s break down the MoyaRuiz Hand Gripper and see what this cigar brings to the table:

For the Hand Gripper, MoyaRuiz turns to its longtime manufacturing partner, Erik Espinosa and the La Zona factory. The blend features an Ecuadorian Habano Oscuro wrapper over Nicaraguan tobaccos.

The MoyaRuiz Hand Gripper is available in one size – a 5 x 52 Robusto. There are six pairs of Hand Grippers packaged in a box that will deliver 12 cigars.

The Hand Gripper features a sheath with a plastic-like coating to simulate the handle of a hand gripper. 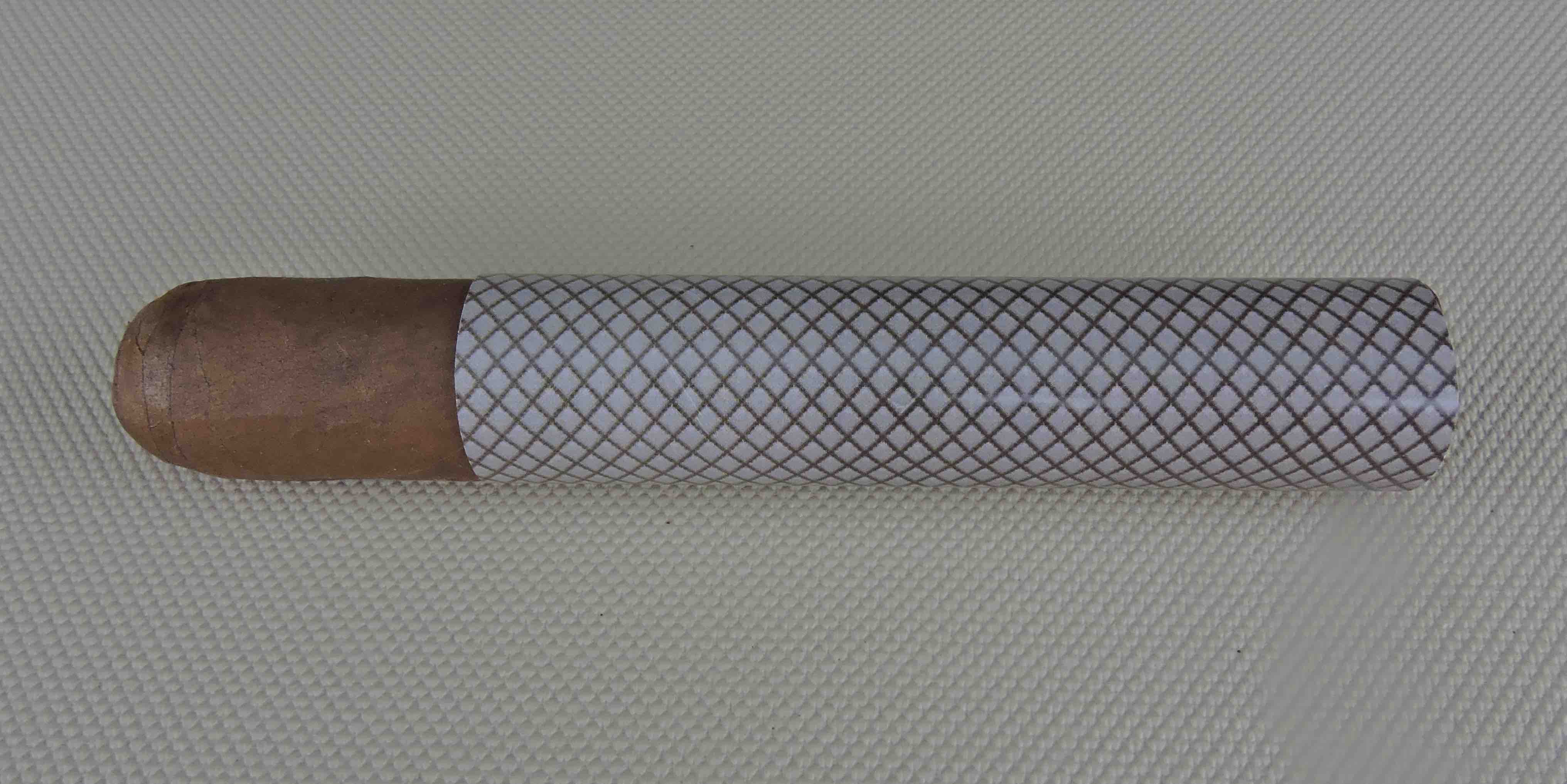 Once the sheath is removed, there is a cigar band still on the cigar., The band is black in color. On the center of the band is an orange hand with the text “HAND GRIPPER” in a gray font that resembles the handles of a hand gripper. The right side of the band has the text “EXCLUSIVE RELEASE” in black font on a gray panel. The far right has the text “MOYARUIZ CIGARS” in white font arranged in landscape mode. 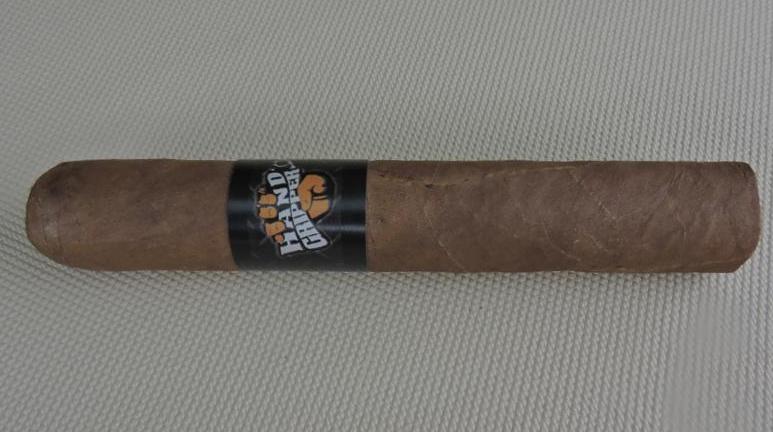 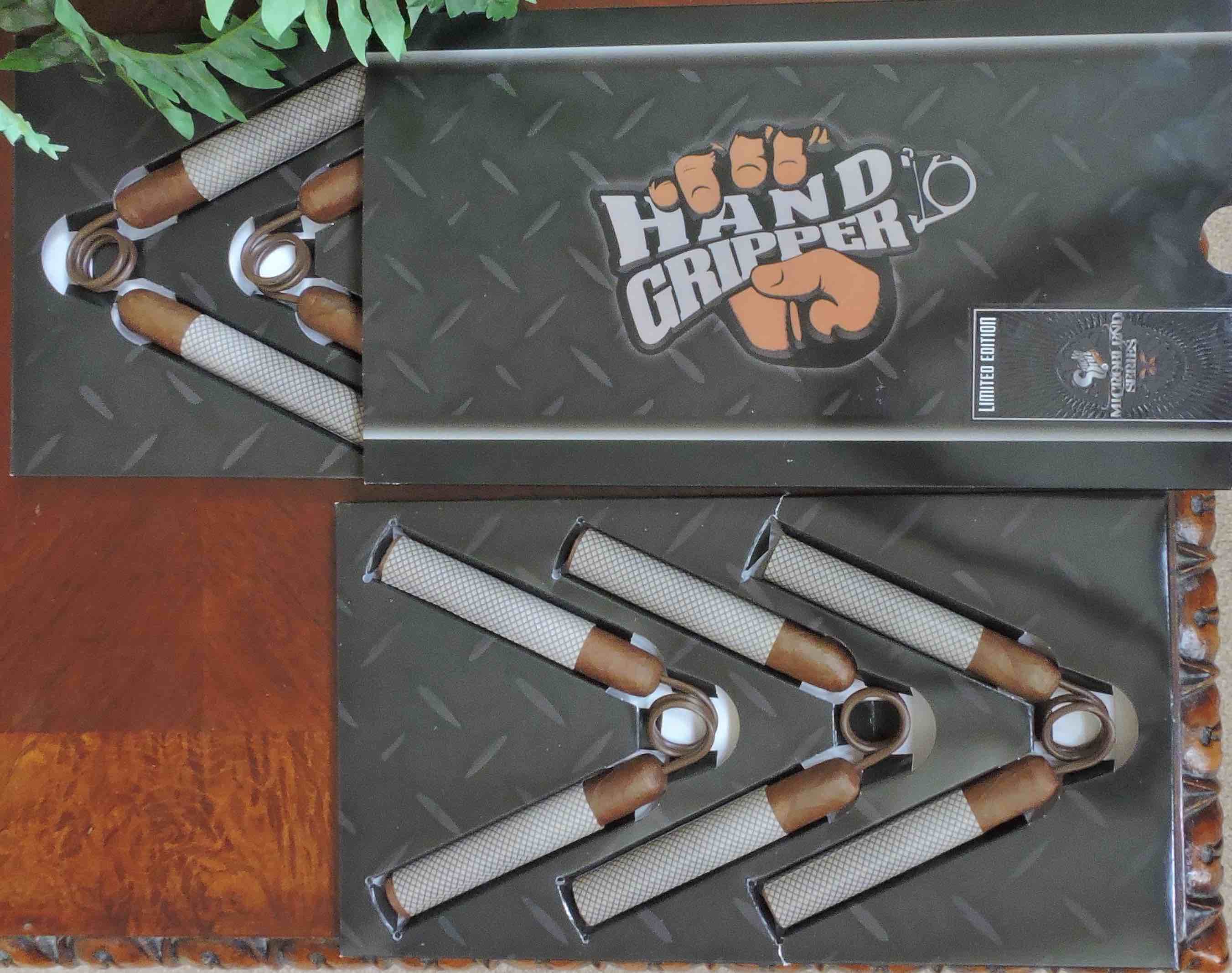 The Ecuadorian Habano Oscuro wrapper of the MoyaRuiz Hand Gripper had medium to dark brown color with a slight rosado tint to it. Upon closer examination, there was some subtle darker mottling on the surface. There was a light coating of oil on the surface of the wrapper. The wrapper had a slightly bumpy feel to it. There were some thin visible veins and some visible wrapper seams.

The first step to smoking the MoyaRuiz Hand Gripper was to separate the pair. This was a rather easy task to do – simply pulling the cigars apart. Once the cigar was removed, there was a ready-made punched hole.

I opted to still use a straight cut to remove the cap in its entirety as I prefer a greater surface area to draw from. The only thing is the punch is a little deeper than most punch-cuts would make so there still was part of the hole present. At this point, it was time to move on to the pre-light draw. The cold draw delivered a mix of natural tobacco, cedar, and floral notes – a satisfactory pre-light draw. Now it was time to light up the MoyaRuiz Hand Gripper and move on to the smoking phase.

The MoyaRuiz Hand Gripper delivered a mix of natural tobacco, cedar, nut, black pepper, and floral notes. Early on the natural tobacco notes moved to the forefront. The pepper notes remained a close secondary note on the tongue but were quite prominent on the retro-hale. A fusion developed between the cedar and nut flavors. This cedar/nut combination and floral notes were a little more distant.

By the final third, the black pepper joined the earth notes in the forefront. This was balanced by the cedar-nut and natural tobacco notes. This is the way the MoyaRuiz Hand Gripper came to a close. The resulting nub was slightly soft to the touch and cool in temperature.

The MoyaRuiz Hand Gripper maintained excellent combustion throughout the smoking experience. While there was a slight amount of jaggedness on the burn line, the cigar had no problem maintaining a straight burn path. The resulting ash wasn’t overly firm. There was a slight amount of flaking from time to time. This was an ash that had a salt and pepper color scheme. Meanwhile, the burn temperature and burn rate were both ideal. 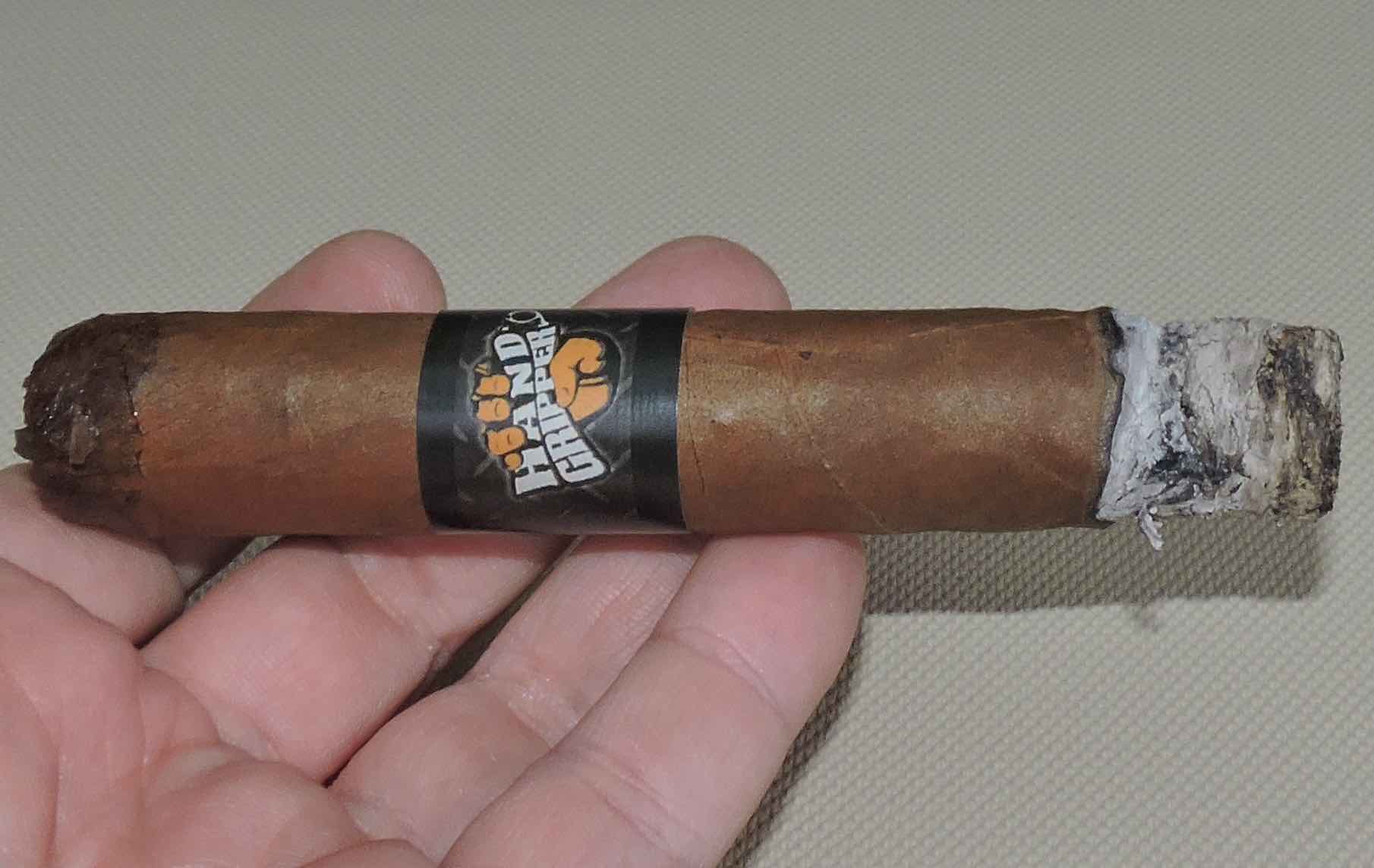 Despite some of the hole still present from where the connector was removed, I didn’t find this to have a negative on the draw. The draw didn’t quite have the resistance I prefer on a cigar, but the Hand Gripper was a cigar that had performed quite well on the draw. Using the straight cut with the hole present, I believe this led to the large volume of smoke that this cigar produced.

MoyaRuiz has gained a reputation for producing some very full cigars when it comes to strength and body – and the Hand Gripper is no exception. This is a cigar that started out medium to full for both strength and body. By the time both attributes moved into the second third, the Hand Gripper was in full strength, full-bodied territory. The remainder of the cigar still showed both attributes increasing at a slow rate.

When it came to strength versus body, both attributes countered each other nicely with neither overshadowing the other.

As mentioned the Hand Gripper falls in-line with the bold cigars that MoyaRuiz is known for. It’s a cigar I would put up there right at the top in terms of one of the more powerful smokes MoyaRuiz has released. On top of that, during the second half of this cigar, it was as bold a cigar as I have had in the Smoke Inn MicroBlend Series. The packaging is fun and its quite innovative in my book. It’s a nice bonus. In fact, I’m quite impressed at the effort put in to prevent the cigars from damage. Flavor-wise, while the Hand Gripper was satisfying, it did lack some “wow” factor and I was hoping for a little more.

This is a cigar that I still would recommend for an experienced cigar enthusiast looking for a bold smoke. At the point this cigar was being assessed, the Hand Grippers were only made available online in pairs and sold in boxes. The price for a box is a good value, but our value rating is calculated for an individual cigar. As a result, while it’s a cigar I would still recommend if sold as a single, I recommend trying one first before buying a box or even an individual pair.