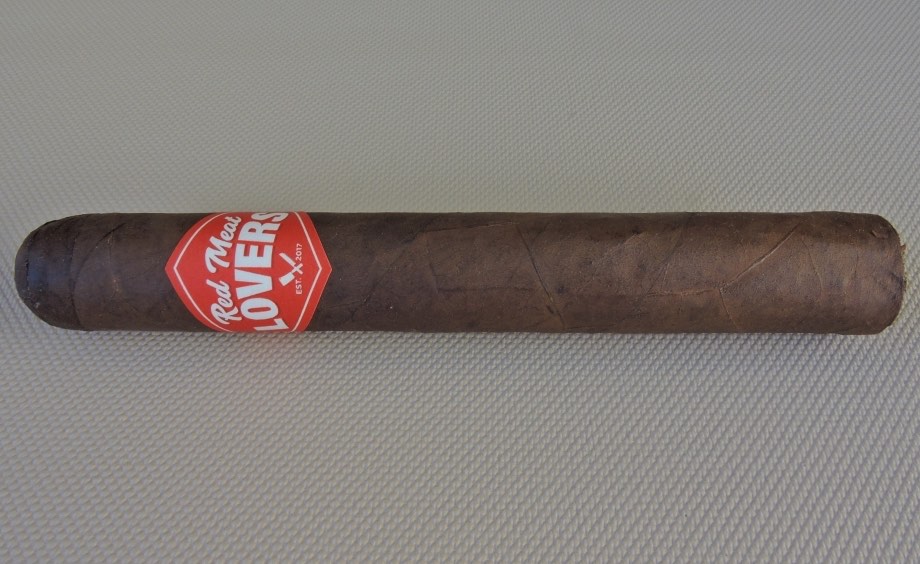 The Smoke Inn Microblend Series concept involves Smoke Inn teaming up with some leading brands and manufacturers in the cigar industry to produce a small batch limited run exclusive to its shops. The series was originally launched late in 2010 to commemorate Smoke Inn’s 15 years in business. It was originally planned to be a four-cigar series, but since then has remained a series of ongoing shop exclusives.

While Smoke Inn lists 13 installments, there have actually been 15 releases in the MicroBlend Series. This is because the Padron SI 15 release had two blends (a natural and maduro), and the Tatuaje Anarchy was re-released in 2015. Shortly after the announcement of the Red Meat Lovers Club Cigar, Smoke Inn announced and released a thirteenth installment, MoyaRuiz Cigars’ Hand Gripper. For completeness, we list all of the blends here.

Without further ado, let’s break down the Red Meat Lovers Club cigar and see what this cigar brings to the table.

Saka’s goal was to not only blend the cigar that could complement the steak dinner, but hold its own when eating such a meal. The blend consists of six different tobaccos. It is highlighted by Connecticut Broadleaf No. 1 Dark wrapper. The binder used is a San Andres Negro leaf from Mexico. The fillers feature three different primings of Nicaraguan tobacco from three different regions as well as some Pennsylvania Ligero. The cigar is produced at Nicaraguan American Cigars S.A. where Dunbarton Tobacco & Trust produces the Mi Querida and Umbagog lines.

The Connecticut Broadleaf No. 1 Dark typically comes from the top two or three leaves of the plant. Not all of these leaves qualify as a No. 1 Dark and it ultimately comes down to what the texture of the leaf is to determine if it’s a No. 1 Dark.

The Red Meat Lovers Club cigar is available in one size – a 6 x 56 Toro Grande. The cigar is packaged in ten-count bundles covered with butcher’s paper with a “meat tag” on it. A total of 500 bundles have been produced. 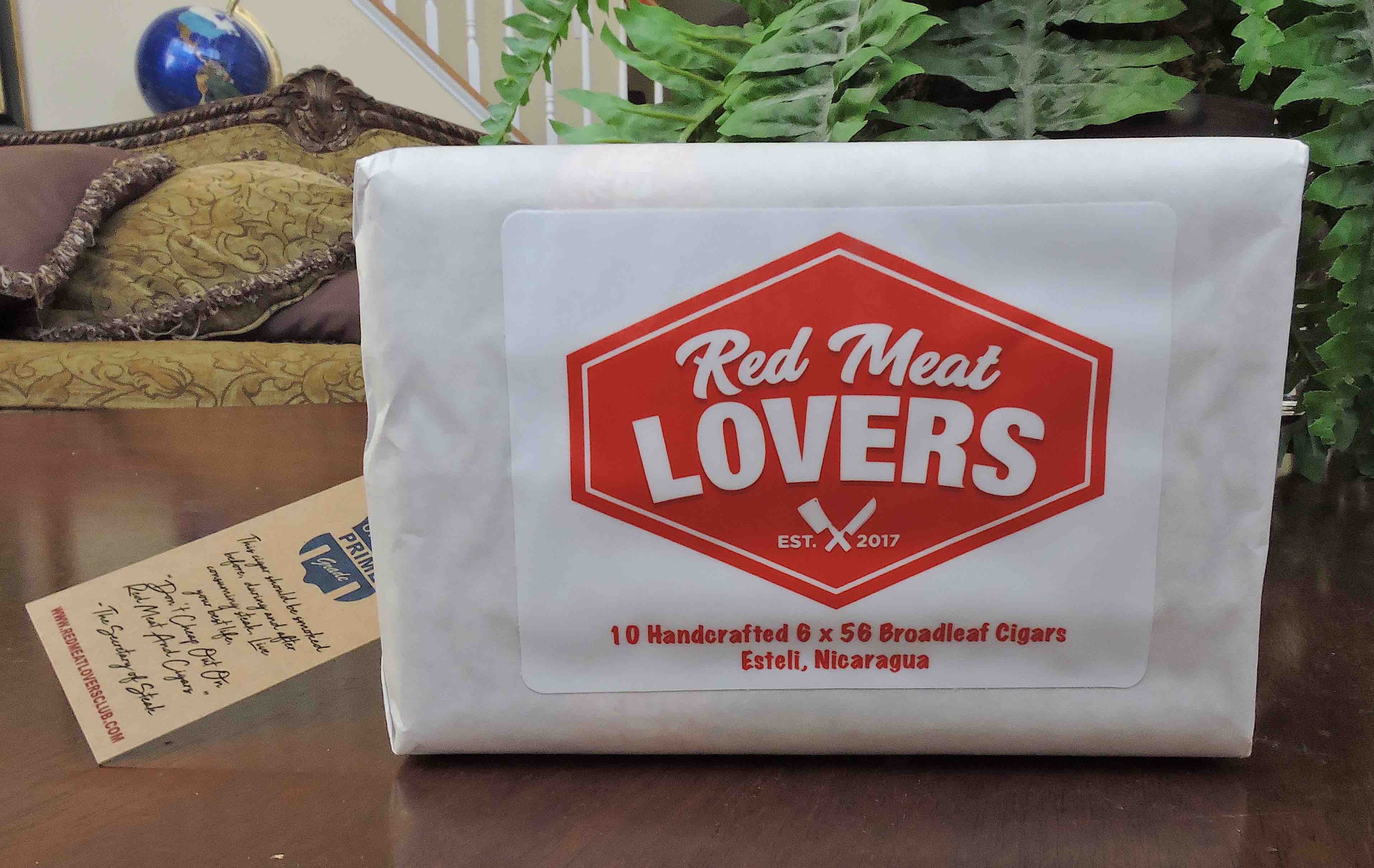 The Connecticut Broadleaf No. 1 Dark wrapper of the Red Meat Lovers Club cigar lived up to its name as it had a dark milk chocolate color to it. Upon closer examination, there was some mottling that could be seen on the surface. There was a light sheen of oil on the wrapper. This was a wrapper that had a slightly bumpy surface. There were some thin visible veins and thin visible wrapper seams. The cigar was finished with a small cinnamon-bun swirl pig-tail attached to the cap.

As opposed to pulling the swirl pig-tail off the Red Meat Lovers Club cigar, a straight cut was used to remove both the cap and the pig-tail at the same time. Once the cap was removed it was time to commence with the pre-light draw. The dry draw delivered a mix of dark chocolate and floral spice. Overall, this was a satisfactory pre-light draw. At this point, it was time to light up the Red Meat Lovers Club cigar and move on to the smoking phase.

Later in the first third of the Red Meat Lovers Club cigar, the floral notes morphed into a bittersweet berry flavor. I actually found this bittersweet flavor to work well with the overall flavor profile. As the cigar moved through the second third, there was an increase in the earth notes. By the midway point, the earth notes displaced the chocolate as the primary flavor. The creamy undertones from the chocolate notes also diminished greatly.

As the Red Meat Loves Club moved into the later part of the second third, there was a gradual increase in the pepper on both the tongue and retro-hale. This continued into the final third, but these pepper notes didn’t quite make it to the forefront. As the cigar experience came to a close, the earth notes remained primary. The pepper notes remained in the background with notes of berry and chocolate a little more distant. The resulting nub was cool in temperature and slightly soft to the touch.

There was a slight amount of meandering on the burn path of the Red Meat Lovers Club cigar. This was remedied with some touch-ups, and I found the amount of additional touch-ups needed to be slightly above the norm. The resulting ash had a silver gray color to it – and it was skewed toward the firmer side. The burn rate and burn temperature were ideal. 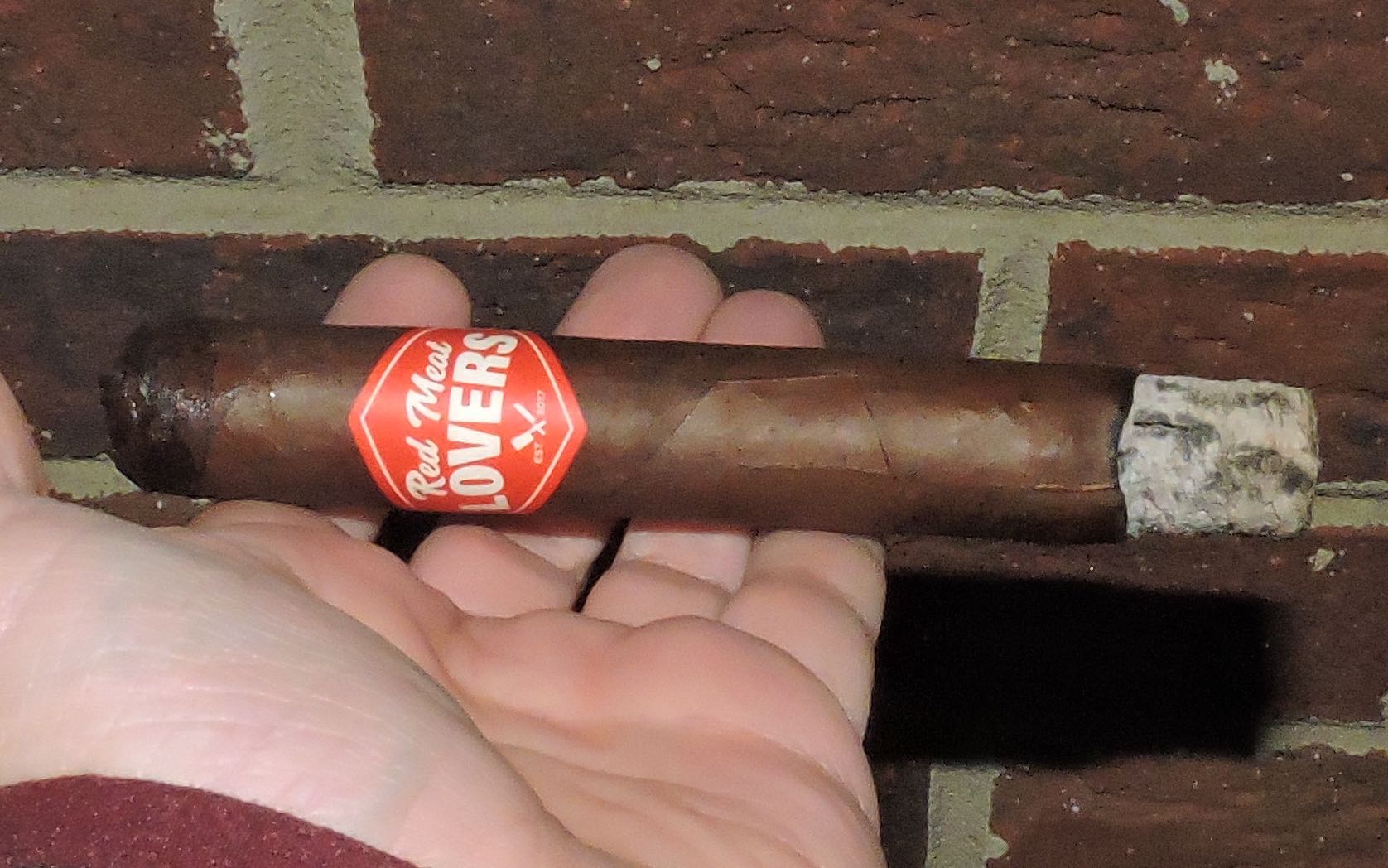 The draw of the Red Meat Lovers Club Cigar struck a nice balance between openness and resistance. This was a low maintenance cigar to derive flavor from. In addition, this cigar created an ample amount of smoke.

When this cigar was announced, it was positioned as “gut-punching full”. This is something I will disagree with as I didn’t find this to be anywhere close to a powerhouse cigar.

The flavors to the Red Meat Lovers Club cigar are quite rich, but that doesn’t translate to being a fuller cigar in terms of strength and body. This is a cigar that started out with medium strength and medium body. Both the strength and body increased along the way. There was a nominal increase in strength, but in the end, the Red Meat Lovers Club cigar was still in the medium range. As for the body, it did increase enough to move into medium to full territory by the final third.

Throughout the smoking experience, the body had the edge over the strength.

While I like having a cigar with a steak, I much prefer having one after I finish my dinner. With the case of the Red Meat Lovers Club cigar, I did try this scenario outside of this assessment. I found the richness of this cigar worked perfectly smoking it after the meal. At the same time, this is easily a cigar that can be enjoyed at any time.

Overall, this is a very good cigar. The Smoke Inn MicroBlend Collection has had some very good releases, and while this might seem to score lower than those releases in the past, our scoring on Cigar Coop has gotten tougher, so it does earn a spot as one of the better MicroBlend releases.

Finally, I wouldn’t consider this as anywhere near “gut-punching full”. It’s a cigar that I could recommend to both a novice or experienced cigar enthusiast. As for myself, this is a cigar that I would smoke again and it garners box worthy consideration.