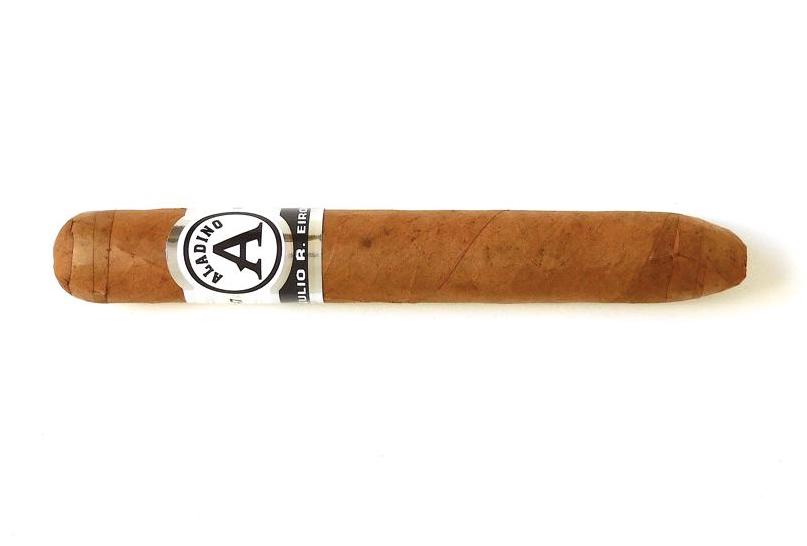 The Queens Perfecto is a unique shape in the JRE Tobacco portfolio. It’s a cigar that is more rounded by the cap and more tapered by the footer – making it almost an inverse torpedo.

Without further ado, let’s break down the Aladino Connecticut Queens Perfecto and see what this cigar brings to the table.

The wrapper of the Aladino Connecticut is Ecuadorian-grown Connecticut Shade. The remainder of the blend consists of Honduran tobaccos from the JRE Tobacco farm. Production is handled out of Julio R. Eiroa’s Las Lomas factory in Honduras.

In addition to the Queens Perfecto size, the Aladino Connecticut comes in three additional sizes. Each size is presented in 20-count boxes. 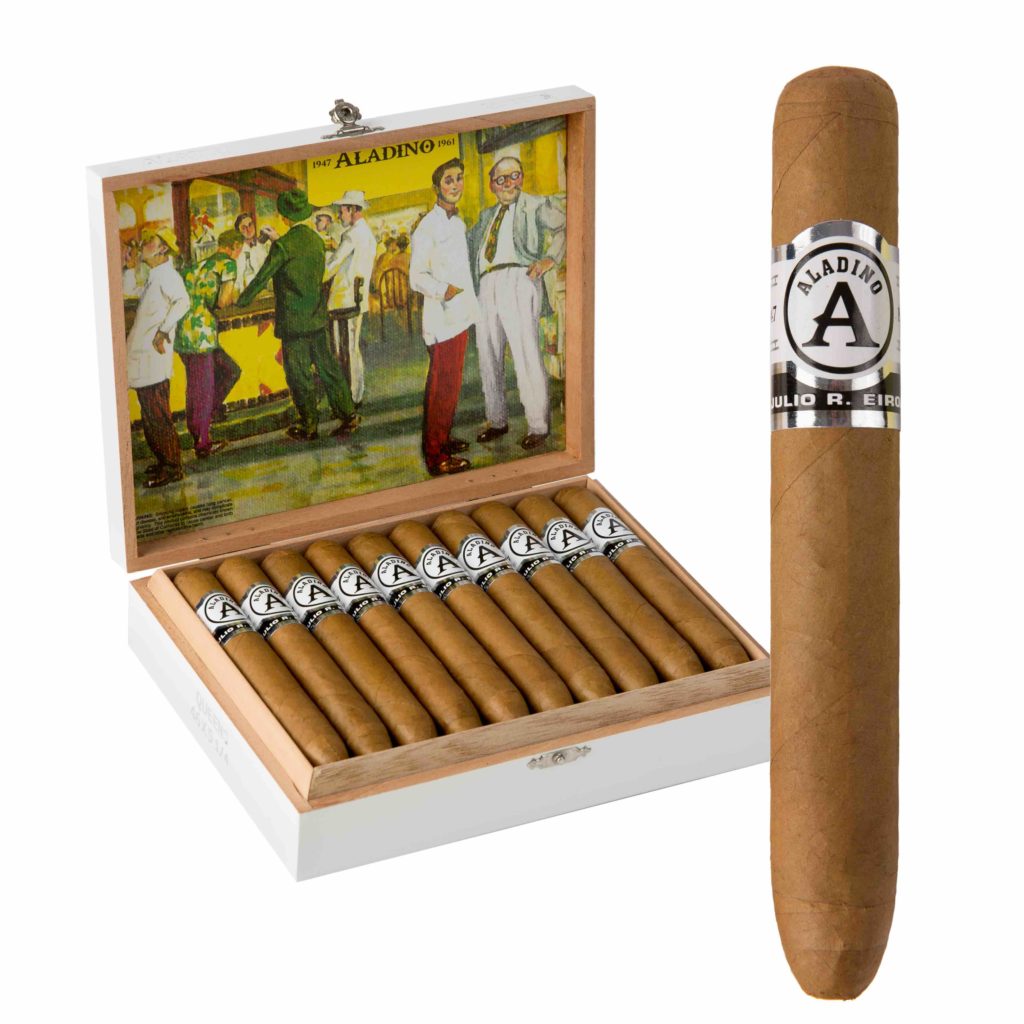 The Ecuadorian Connecticut Shade wrapper of the Aladino Connecticut Queens Perfecto had a butterscotch color with a slightly weathered look. There wasn’t much in the way of oil. The wrapper had some visible veins and visible wrapper seams. The veins had a slight amount of toothless on the wrapper. As mentioned the Queens Perfecto shape is somewhat like an inverse torpedo. Toward the foot of the wrapper there was a gentle taper leading to an open footer. There was a gentler taper toward the head which still had a cap on it.

The Aladino Connecticut uses a similar band design found on the original Aladino Corojo and Maduro lines, but with a different color scheme. The upper part of the band has a white background. There is a large black “A” with the text “ALADINO” arranged in a curved fashion above it. To the left of the circle is the text “1947” while to right is the text “1961” – both in black font. Sitting on that same row to the far right side is the text (also in black font) “HECHO A MANO.” The remainder of the band has silver adornments. The lower portion of the band almost looks like a pseudo-secondary band. It is black color with silver trim. The text “JULIO R. EIROA” appears in white font on that white background.

A straight cut was used to kick off the cigar experience of the Aladino Connecticut Queens Perfecto. A slight amount of taper remained on the head of the cigar once the cap was clipped. At this point, it was on to the pre-light draw. The dry draw delivered notes of cream, wood, and cedar. This was a satisfactory pre-light draw experience. At this point, it was time to light up the Aladino Connecticut Queens Perfecto and move on to the smoking phase.

The Aladino Connecticut Queens Perfecto started out with more notes of cream, wood, and cedar. As the cigar progressed through the first third, the cream and cedar notes moved into the forefront. The cream notes maintained a slight edge during this stage of the cigar. As the cigar moved through the first third, nut and slight citrus notes surfaced in the background. Meanwhile, the retro-hale produced an additional layer of wood and black pepper.

As the Queens Perfecto moved into the second third, the cedar and cream notes still were grounded in the forefront and were pretty much sharing the role of providing the primary flavors. A slight black pepper note was not present on the tongue. Toward the midway point, the citrus notes took control for a short time – providing a nice sweetness. The cream and wood settled in the background with the cedar, pepper, and nut flavors.

By the last third, the cedar notes regained their position as the primary flavor. These flavors were rounded out by the cream, wood, pepper, citrus, and nut flavors. There was a slight increase in pepper toward the end. This is the way the Aladino Connecticut Queens Perfecto came to a close. The resulting nub was firm to the touch and cool in temperature.

The burn of the Aladino Connecticut Queens Perfecto scored nicely. This is a cigar that had a slight amount of curvature on the burn line from time to time, but in the end didn’t have any problems maintaining a straight burn path. The resulting ash was a salt and pepper colored skewed toward the darker side. This was a firm ash that caame off the cigar in clean chunks. The burn rate and burn temperature were both ideal. 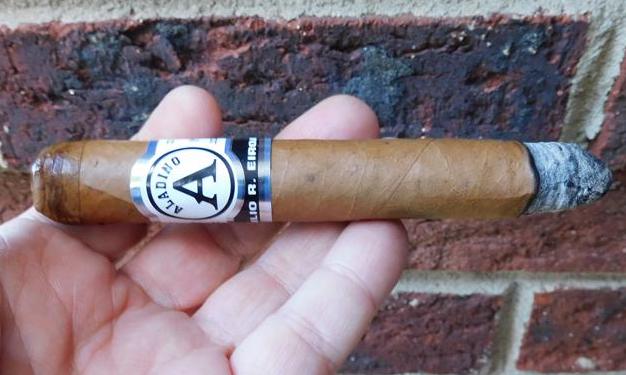 The draw of the Aladino Connecticut Queens Perfecto also performed quite well. This cigar had a nice balance of resistance and openness.  At the same time, this was a low maintenance cigar to derive flavor from.

If you are looking for a contemporary style Connecticut Shade cigar, the Aladino Connecticut Queens Perfecto is not going to be your cigar. Aladino is a brand that takes you back to the golden age of cigar smoking from 1947 to 1961, and the Aladino Connecticut is perhaps the best example of a brand that does this. This is a cigar that was mild in strength and mild to medium in body from start to finish. There wasn’t a lot of variance in the intensity levels of the strength and body. In addition, throughout the smoking experience, the body had a slight edge over the strength.

As mentioned, Aladino Connecticut Queens Perfecto is a milder cigar. It’s not only the mildest cigar I’ve had on in the JRE Tobacco portfolio, but it is one of the mildest premium cigars to hit the market in the past year. This shouldn’t be construed as a negative because, in my opinion, the mildness of the cigar is its strength. The mild strength and mild body play very well with the flavors delivered. While the flavors are pretty straightforward, they work here. The Queens Perfecto shape makes this a fun cigar to smoke

This is definitely a great cigar to give to the novice smoker. As for experienced smokers, I’d only steer it to someone who enjoys something milder. The $6.80 price point makes this a very affordable cigar for anybody. As for myself, it’s a cigar I’d smoke again – and buy multiples to keep in the humidor.