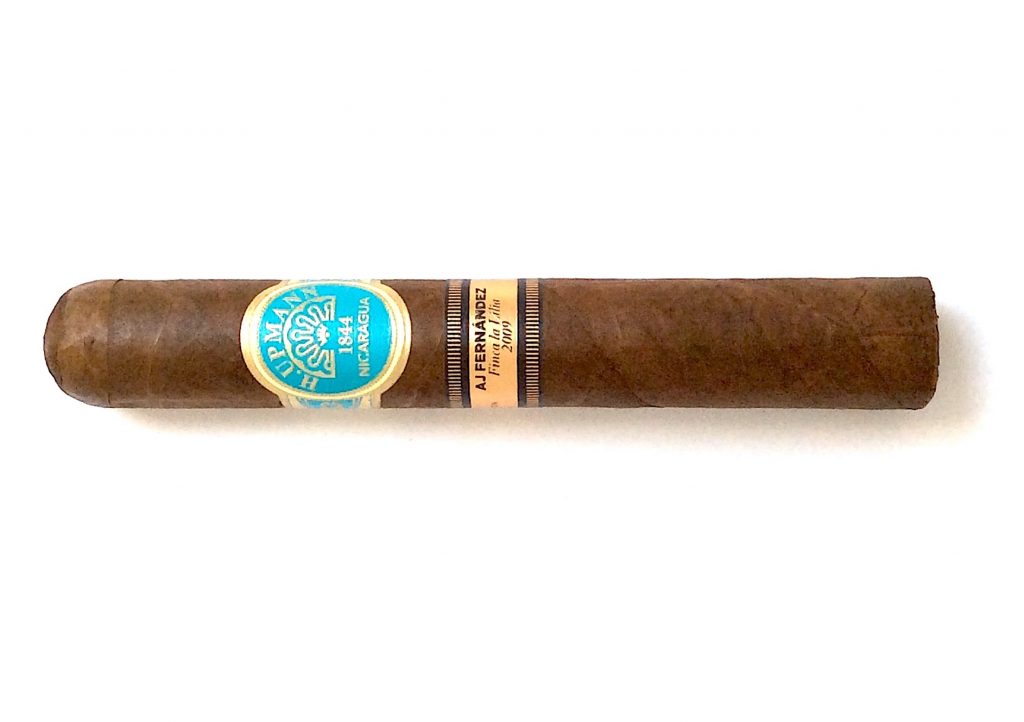 Without further ado, let’s turn our attention to the H. Upmann Nicaragua by AJ Fernandez Finca La Lilia 2009 and see what this cigar brings to the table.

Like the core line, the H. Upmann Nicaragua by AJ Fernandez Finca La Lilia 2009 features an Ecuadorian Sumatra wrapper and Nicaraguan Corojo 99 binder. Like the core line, the fillers are Dominican Piloto Cubano and Nicaraguan Criollo ’98 with the difference of the Nicaraguan component of the filler features the ten-year-old tobaccos from the La Lilia farm. The “2009” represents the year of the vintage of the aged tobacco. Production is handled out of AJ Fernandez’s factory in Estelí, Nicaragua. 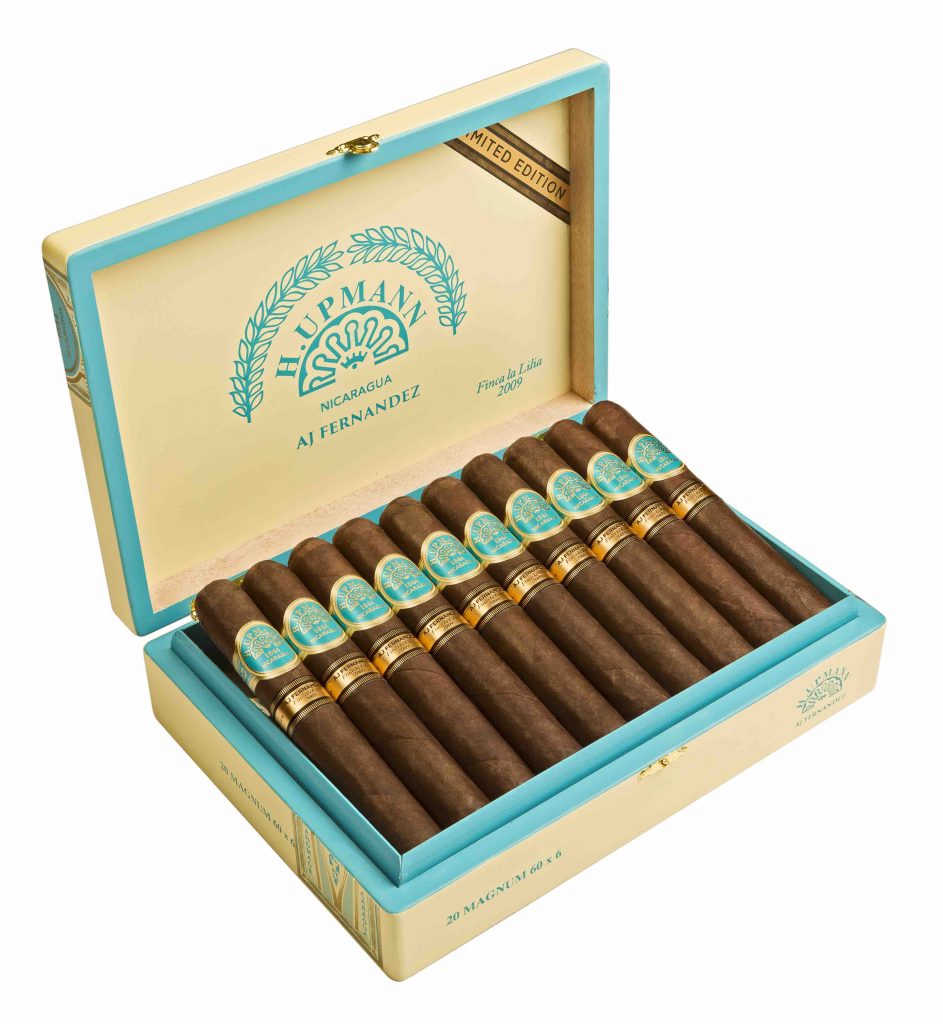 The Sumatra wrapper has a medium to dark brown color to it. Upon closer examination, some subtle mottling can be seen on the surface. This wrapper didn’t have much in the way of oil on it. There were some visible veins and thin wrapper seams on the surface as well.

The band to the H. Upmann Nicaragua by AJ Fernandez Finca La Lilia 2009 features two bands. The primary band is the same as the core H. Upmann Nicaragua line. It features an aqua blue background with gold font. The center of the band features the H. Upmann sun-wheel logo. Above the logo is the text “H. UPMANN” and below it is the text “1844” and “NICARAGUA.” There are gold adornments to the left and right. The band is also finished with gold trim.

The secondary band of the Finca La Lilia 2009 is unique to that cigar. It features a thick gold stripe surrounded by black stripes. The trim of the band has a gold and black vertical stripe pattern.

The second third saw a fusion between the baker’s spice and natural tobacco form. This resulted in a more intense sweetness in the forefront. The citrus and chocolate remained in the background with a slight black pepper note emerging.

The final third of the Finca La Lilia 2009 saw the natural tobacco notes break apart from the baker’s spice. There was a slight edge to the natural tobacco notes. While the baker’s spice dialed back, there was a slight increase in the black pepper, but it never approached the forefront. There still were some notes of citrus and chocolate in the background. This is the way the Finca La Lilia 2009 came to a close. The resulting nub was soft to the touch and cool in temperature.

While the Finca La Lilia 2009 maintained a straight burn path, there were multiple touch-ups needed to keep it on track. There was some jaggedness on the burn line throughout the smoking experience. The resulting ash was skewed toward the firmer side. This was silvery-gray ash with some darker spots in there. The burn rate and burn temperature were both ideal. 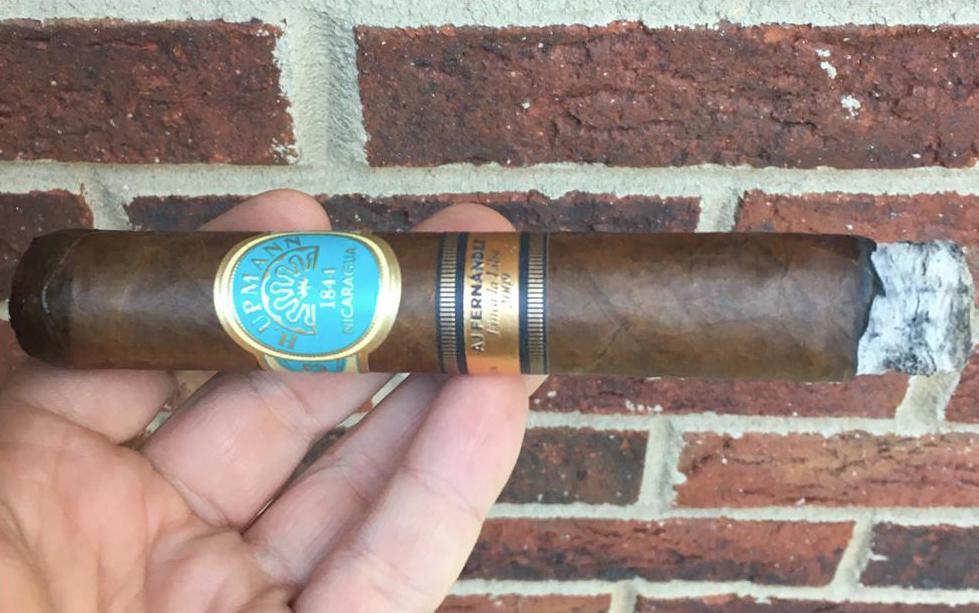 The draw of the Finca La Lilia 2009 had a nice amount of resistance and openness to it. At the same time for a large cigar, this was a low maintenance cigar to derive flavor from.

The Finca La Lilia 2009 started out as a medium strength, medium-bodied cigar. The intensity level of both attributes remained constant for the first 3/5 of the cigar. As the cigar moved into the final 2/5 of the cigar, the intensity level spiked up. By the last third, the strength level moved to medium to full, but the body still remained in the medium range.

In terms of strength versus body, both attributes were balanced, but by the last third, the strength took a slight edge.

I’m always intrigued by how a blend works in a Magnum size. With the original H. Upmann Nicaragua by AJ Fernandez blend, I never had a good feel how the blend would work. However, when it came to the Finca La Lilia 2009 release, I think the aged tobacco was the secret sauce with this blend – and it clicked with this cigar. In fact, this was the best iteration of the H. Upmann Nicaragua line. At $12.00, the Finca La Lilia 2009 is not an inexpensive cigar, but I think it’s one I still would recommend. It’s a cigar that I think would be geared to fans of the original H. Upmann Nicaragua line and/or for fans or large ring gauge cigars. As for myself, it’s a cigar I would certainly purchase and smoke again.