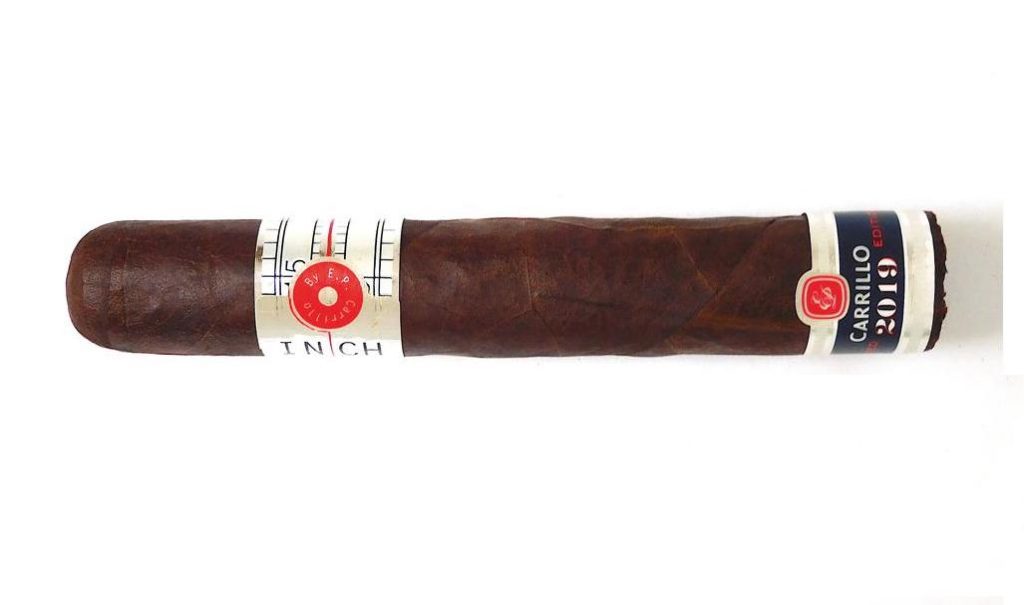 The band of the E.P. Carrillo INCH Limited Edition 2019 is a variation on what is found on the regular production INCH line. The band features a silver background with black font as the main color scheme.

The Connecticut Habano wrapper on the E.P. Carrillo INCH Limited Edition 2019 is a thick, oily wrapper. Together with a large ring gauge with plenty of tobacco, it makes this a weighty cigar. The color of the wrapper had a roasted coffee bean color. There were some visible veins, but most of the wrapper seams that were visible were on the thin side.

There are two bands on the E.P. Carrillo INCH Limited Edition 2019. The primary band features the mostly silver, chrome and black colored measuring ruler design. On the far right side of the band is a red circular ring design that serves as a band fastener. On that circle is the text “BY E.P. CARRILLO” etched on it in silver. To the left of the fastener is the text “INCH” also etched on it arranged in landscape mode in black font. At the center of the band is a red circle featuring a silver “EP” insignia. Above it is the text “INCH” in a thin black font. Below the circle is the text “CARRILLO” in a thicker font. A red divider protrudes from the left and right side of the circle and serves as a divider.

The secondary band of the E.P. Carrillo Inch Limited Edition 2019 has a blue, silver, chrome, and red color scheme. A thick blue stripe is on the band surrounded by chrome and silver trim. On the upper center part of the band is a red-colored rounded square featuring the silver “EP” insignia. Below that is the text “CARRILLO” in silver font, and below that text is “2019” in white font with red accents. The left and right side of the band feature the text “LIMITED” and “EDITION” respectively. Further to the left and right are a series of red vertical stripes.

One thing I recommend when smoking Super Gordos (greater than a 60 ring gauge) is to use a cutter than is big enough to cut the entire cap off. There are several on the market that can handle this task, and this is what was done with the E.P. Carrillo INCH Limited Edition 2019. Once the cap was clipped, it was on to the pre-light draw. The cold draw delivered notes of coffee, earth, cream, and a slight fruit sweetness. I considered this to be an excellent pre-light draw experience. Now it was on to removing the footer band of the E.P. Carrillo INCH Limited Edition 2019, lighting up the cigar, and moving into the smoking phase.

Given the E.P. Carrillo INCH Limited Edition 2019 had an excellent pre-light draw, I was pleased when the coffee, earth, cream, and fruit sweetness was present as I lit up the cigar. In addition, there was some red pepper that entered the equation. The red pepper was present on the retro-hale alone with some additional fruit sweetness. Early on there was no dominant note, but by the middle of the first third, the coffee notes emerged as the primary note.

The coffee notes remained grounded in the forefront during the second third of the E.P. Carrillo INCH Limited Edition 2019. Meanwhile, in the background, there was an increase in the red pepper and earth notes. The earth notes increased a little more rapidly and joined the coffee in the foreground. The cream notes also dimmed in intensity and the final third, these notes had dissipated.

The final third of the E.P. Carrillo INCH Limited Edition 2019 saw the earth and coffee notes remain primary. The red pepper notes became the most prominent of the background notes. There also was some subtle fruit sweetness that remained int he more distant background. This is the way the E.P. Carrillo INCH Limited Edition 2019 came to a close. The resulting nub was slightly warm to the touch and cool in temperature.

For the most part, the E.P. Carrillo INCH Limited Edition 2019, required frequent touch-ups along the way. While the touch-ups did the trick keeping the cigar on a straight track, it required more maintenance than I prefer. The resulting ash had a near salt and pepper color to it. The ash skewed toward the firm side. Meanwhile, the burn rate was ideal. The burn temperature toward the very end got lukewarm and but by this point, it was time to put down the cigar. 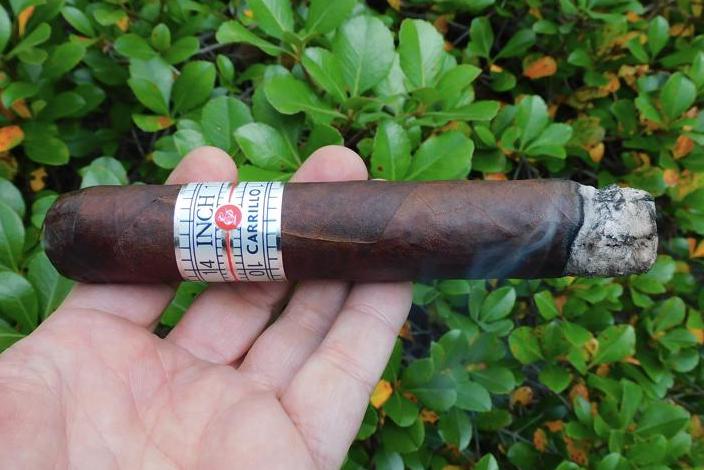 Both the strength and body balanced each other nicely with neither attribute overpowering the other.

The E.P. Carrillo INCH Limited Edition 2019 fires on all of the cylinders when it comes to flavor. The Connecticut Habano wrapper is one I have found Ernesto Perez-Carrillo Jr works well with. It’s clear this is a cigar that was blended specifically for a big ring gauge – and that works in favor of this blend. When it comes to big ring gauge cigars, it can turn into a bit of a religious war with people. I find either people love them or hate them. This isn’t going to be a cigar that convinces someone who doesn’t like a big gauge to come over and try it, but it will appeal to the cigar enthusiast who enjoys a big ring gauge. The burn was somewhat high maintenance and that cost this cigar some points when it came to the numeric score and value rating. In the end though, it’s a cigar I’d recommend to a big ring gauge enthusiast. As for myself, it’s one that I would smoke again and buy from time to time.