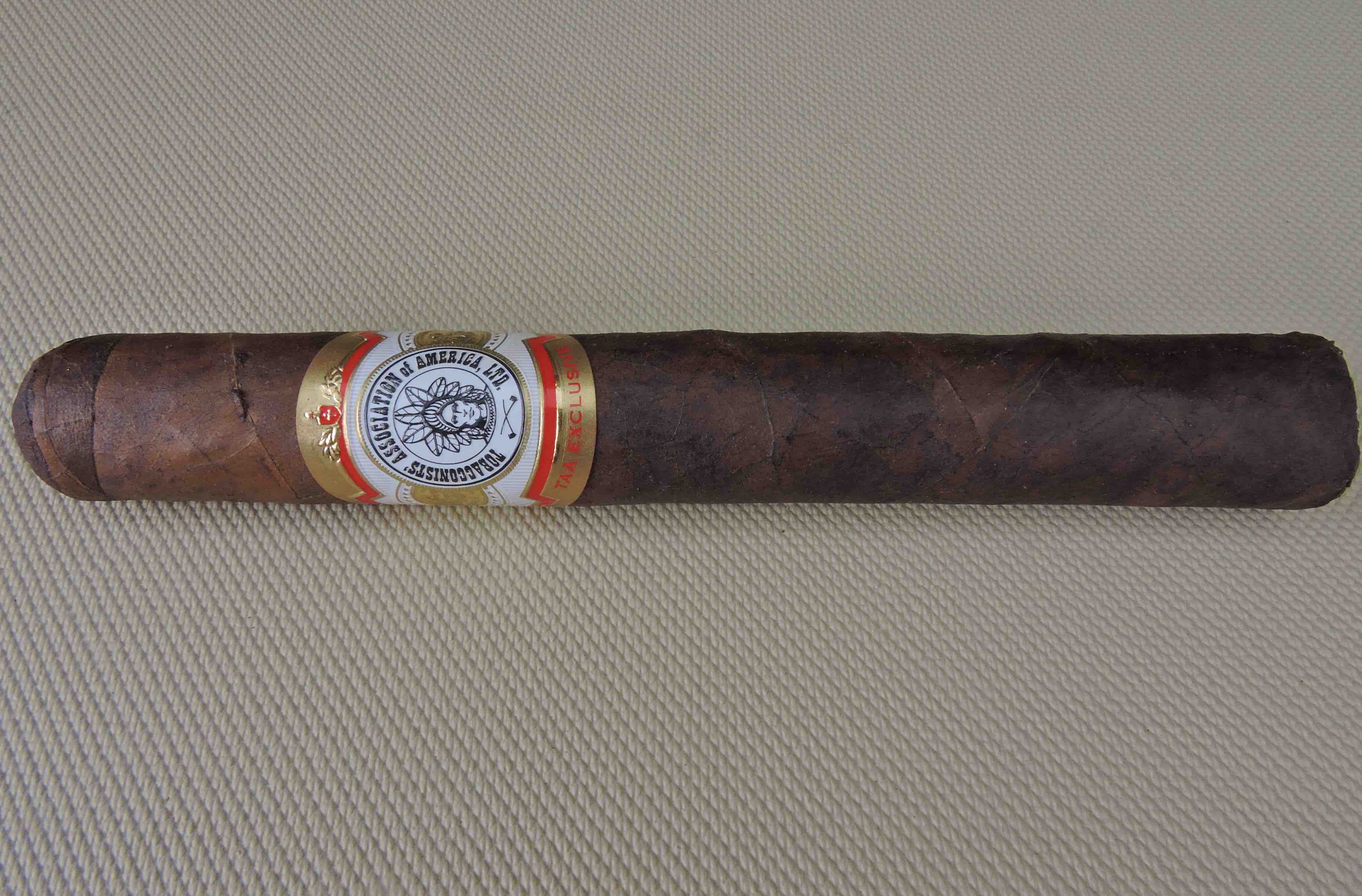 With 2018 being the 50th anniversary of the Tobacconists Association of America (TAA) it was no surprise that the organization’s annual limited edition series saw its largest collection of cigars to date. The 2018 TAA Exclusive Series would see 14 new additions to the series. Included in the series would be several companies that would have their first TAA releases including Gurkha, Arturo Fuente, and E.P. Carrillo. Today we take a closer look at E.P. Carrillo’s inaugural release to the TAA – the E.P. Carrillo TAA Exclusive 2018. It’s a cigar that comes from the man behind E.P. Carrillo, Ernesto Perez-Carrillo Jr.

Without further ado, let’s break down the E.P. Carrillo TAA Exclusive and see what this cigar brings to the table.

The E.P. Carrillo TAA Exclusive features a Connecticut Habano Maduro wrapper over Nicaraguan binder and filler. Connecticut Habano Maduro has been a wrapper Perez-Carrillo has been working with over the past few years, most notably on the E.P. Carrillo Original Rebel Rebellious, Crowned Heads Four Kicks Maduro, and Crowned Heads Four Kicks Mule Kick LE 2018.

The E.P. Carrillo TAA Exclusive coms was released in one size -a  6 x 52 Toro. The cigars were presented in ten-count boxes. There was a total production of 2,000 boxes.

The Connecticut Habano wrapper of the E.P. Carrillo TAA Exclusive had a dark roasted coffee bean color to it. There was also some darker mottling visible on the surface. This was a wrapper that had a nice coat of oil on the surface. It’s a wrapper on the smoother side with the visible veins on the thin side. Despite the darker color of the wrapper, there were still some visible wrapper seams.

The band to the E.P. Carrillo TAA Exclusive had a white background with gold and red trim. The center of the band had the TAA’s Indian head logo on the center. Above the logo on the trim is a very small red-colored coat of arms. There are two medallions on the left and right side of the logo. Further to the left and right is the text “CARRILLO” in black font. The far left has a red and gold E.P. Carrillo logo.

The cigar experience of the E.P. Carrillo TAA Exclusive commenced with a straight cut to remove the cap. After the cap was removed, it was on to the pre-light draw ritual. The cold draw of this cigar delivered a mix of coffee, leather, and a slight tingle of pepper spice. This wasn’t the most exciting pre-light draw, but since the pre-light draw is not scored, there was no loss of points here. At this point, it was time to light up the E.P. Carrillo TAA Exclusive and see what the smoking phase would have in store.

The last third of the E.P. Carrillo TAA Exclusive saw the earth notes join the coffee notes in the forefront. The pepper and char notes had a little more intensity, but they still remained in the background. The dark chocolate sweetness that had briefly surfaced earlier had also dissipated. The is the way the E.P. Carrillo TAA Exclusive came to a close. The resulting nub was firm to the touch and cool in temperature.

There were times during the smoking experience of the E.P. Carrillo TAA Exclusive that the burn wanted to meander. This was rectified with some touchups. The cigar needed more touchups that I would consider the norm. The resulting ash had a medium gray color to it. While it looks firmer in the photo below, in reality, this wasn’t an overly firm ash. As for the burn rate and burn temperature, both were ideal. 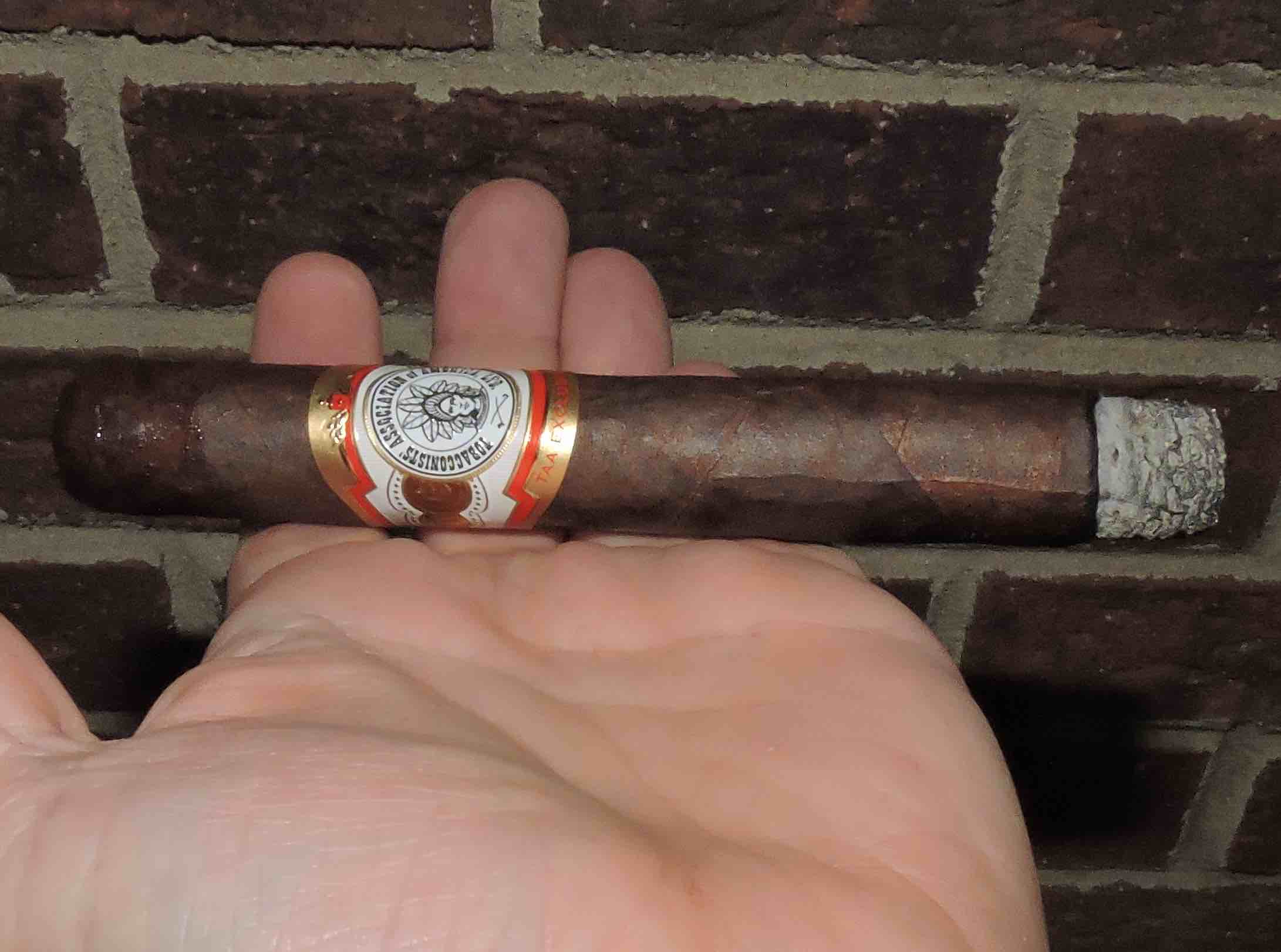 The draw to the E.P. Carrillo TAA Exclusive had a good balance of openness versus resistance. Since I personally enjoy a little resistance on the draw, this satisfied me. This was also a cigar that produced an ample amount of smoke.

Both the strength and body started out in the medium range for the E.P. Carrillo TAA Exclusive. The strength level remained constant, but by the midway point, there was a spike where the cigar moved to medium to full range – where it remained until the end of the smoking experience. The body increased in a more linear fashion – moving to medium to full in the second third and crossing the threshold to full-bodied for the final third.

In terms of strength and body, I found the body maintained an edge throughout the smoking experience.

The E.P. Carrillo TAA Exclusive delivered a solid smoking experience. In particular, I thought the best part of this cigar was the middle third, but overall it was a cigar that was enjoyable. I like how Perez-Carrillo Jr. has made use of the Connecticut Habano wrapper. It’s a cigar I’d recommend to a seasoned cigar enthusiast, but wouldn’t discourage a novice from trying.