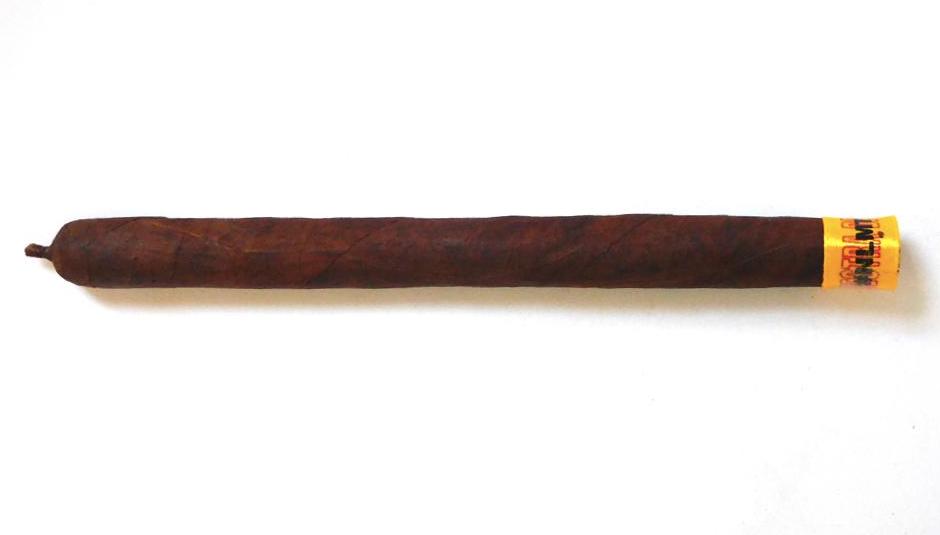 If you follow the cigar industry, when it comes to the lancero; you’ve heard something along the lines of “lanceros are the best expression of size when it comes to a blend, but they never sell”. At Cigar Coop, we have never jumped into lancero-mania and have taken the approach that each blend tends to have a size and shape that works better than others. For Steve Saka, the owner and founder of Dunbarton Tobacco & Trust, he has been on the record he has not been a fan of the lancero. He blended at 40 ring gauge lancero at Drew Estate with the  Liga Privada Unico Serie L40 Lancero, but as far as doing a traditional 38 ring gauge lancero, he had not done a commercial available release. When Saka formed Dunbarton Tobacco & Trust, he started getting requests to do a lancero. Given he has not been a fan of the lancero, he hadn’t included one in his portfolio. Ultimately, Saka decided to take on the challenge and blend a lancero up to his standards. He would do this under the Muestra de Saka series, and the lancero would be a called #NLMTHA – which stands for Now Leave Me The Hell Alone (a response to the many requests). Today we take a closer look at the Muestra de Saka #NLMTHA.

“Muestra is the humble, common word for ‘sample’ in Spanish, however it takes on much more important, sometimes reverential, meaning when used in a handmade cigar factory. A muestra is the vision of the ligador and torcedor realized, it is the promise of a new experience and possibly the key to financial success for the fabrica. Muestras are hoarded and coveted by not only their makers, but by the cigar smokers who seek to catch a glimpse into the cigarmaker’s soul within their smoke”. Muestra de Saka is just that. A line of unique blends and vitolas made in extremely limited quantities that reflect the blending machinations of myself. To smoke a Muestra de Saka is to embark upon a journey with me in which I greatly welcome your companionship.”

Without further ado, let’s break down the Muestra de Saka #NLMTHA and see what this cigar brings to the table.

As with all Muestra de Saka releases, each #NLMTHA is packaged in an individual coffin. The coffins are sold in 7-count boxes. 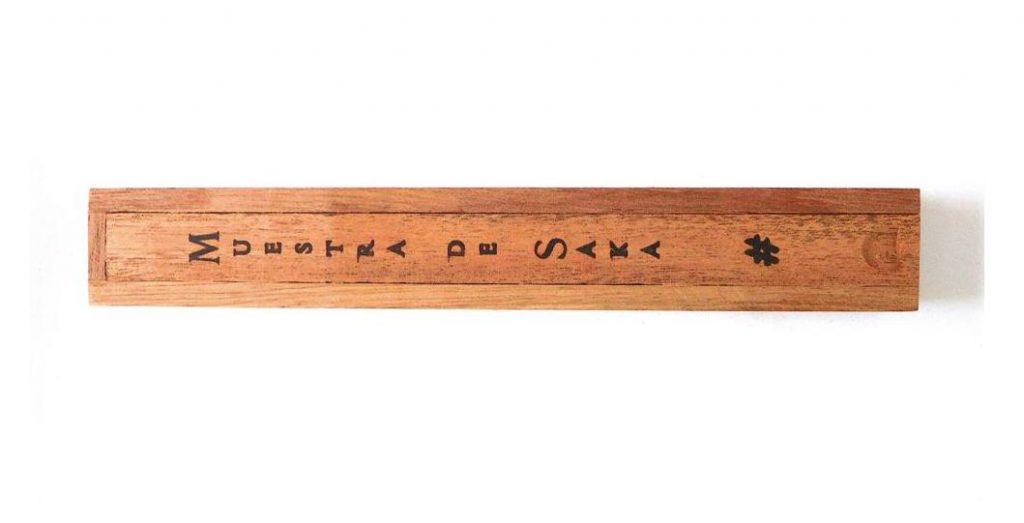 The wrapper of the Muestra de Saka #NLMTHA had a dark roasted coffee bean color. There wasn’t much in the way of oil on the surface, but there was some mottling present. There were some thin visible veins and the darker complexion of the wrapper did a good job at hiding the wrapper seams. The head of the cigar was finished with a pig-tail.

Consistent with most of the Muestra de Saka releases, the #NLMTHA uses a yellow ribbon on the footer. The ribbon contains the text “MUESTRA DE SAKA” in a red stencil font. Superimposed over that text is the text “#NLMTHA” in black font. (Note: The only Muestra de Saka that does not have a ribbon on the footer is the Unicorn – that ribbon is on the center of the cigar).

As opposed to pulling the pig-tail off the cap of Muestra de Saka #NLMTHA, a straight cut was used to remove both the cap and tail simultaneously. Once the cap and tail were removed, it was on to the pre-light draw. The cold draw delivered a mix of coffee and citrus notes. The citrus imparted more in the way of sweetness than acidity. This was a satisfactory pre-light draw. At this point, it was time to light up the Muestra de Saka #MLMTHA and see what the smoking phase would bring.

The Muestra de Saka #NLMTHA started out with notes of coffee, red pepper, wood, and earth. Early on the coffee notes emerged in the forefront. As the #NLMTHA moved through the first third some dark chocolate and citrus notes emerged in the background. Meanwhile, there was an extra layer red pepper on the retro-hale.

By the second third, the earth notes increased in intensity and joined the coffee notes in the forefront. By the midway point, the coffee and earth notes were both the primary notes. Simultaneously the wood notes transformed into a cedar note. As the #NLMTHA started the early part of the second half, the coffee and earth were still in the forefront. There were notes of cedar, red pepper, earth, and to a lesser extent dark chocolate in the background.

By the last third, the earth and coffee notes remained in the forefront. The cedar notes increased in intensity and were the most prominent of the secondary notes. There still were notes of earth, red pepper, and to a lesser extent dark chocolate. This is the way the Muestra de Saka #NLMTHA came to a close. The resulting nub was slightly soft to the touch and cool in temperature.

The Muestra de Saka #NLMTHA scored very nicely when it came to the burn. The #NLMTHA maintained a straight burn path and had a straight burn line from start to finish. The resulting ash was firm. This was an ash that had a silver-gray color with some darker streaks mixed in. The burn rate and burn temperature maintained ideal levels. 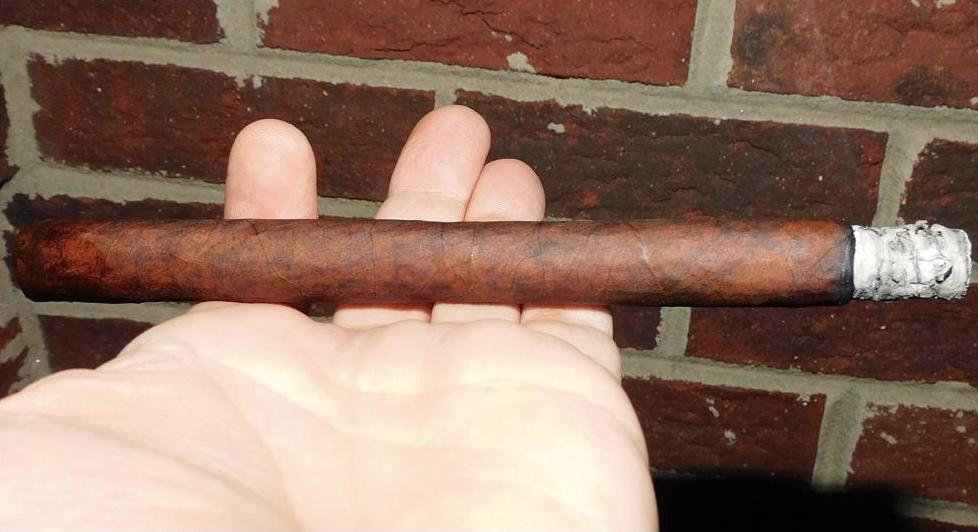 One big criticism of 38 ring gauge lanceros is that they do not draw well. No such problem with the Muestra de Saka #NLMTHA. There still was a touch of resistance on this draw, but this was at the right level. Most importantly, this was a low maintenance cigar to derive flavor from.

The Muestra de Saka #NLMTHA delivered a medium strength, medium to full-bodied smoking experience. There wasn’t much in the way of variance of the intensity levels of both attributes. When it came to strength versus body, the body maintained an edge throughout the smoking experience.

There’s a theory that everyone loves lanceros, but they do not sell. I’m going to take the sales component out of my review as, in my opinion, most lanceros are overrated in terms of performance. They tend to underperform in the 38 ring gauge format since there is only so much space for tobacco – or they’re “expanded” to a 40 or 42 ring gauge lancero (in that case it’s not a true lancero). When looking at the Muestra de Saka #NLMTHA I certainly wouldn’t group it in the underperforming category. It actually does well as a 38 ring gauge. In the end, my general assessment is that this is a good cigar, but it is one that lacks wow factor.

This is I cigar I position for an experienced cigar enthusiast, but it’s also one I would not discourage the novice from trying. At $17.95, the #NLMTHA is not a cheap cigar, but it’s still one I’d smoke and purchase again.