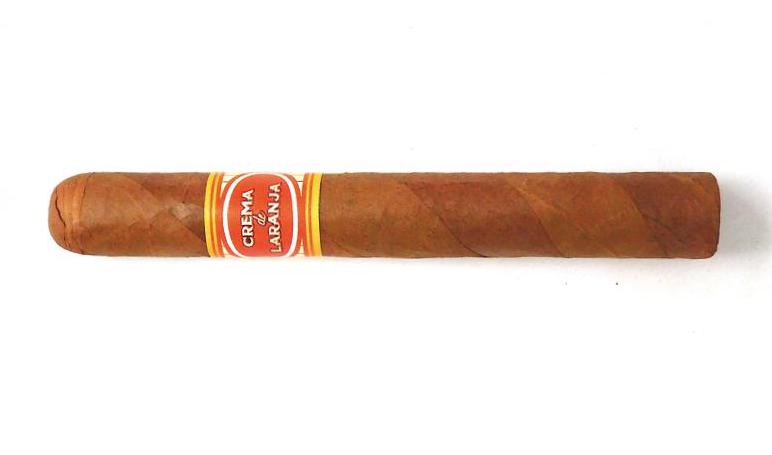 Back in 2016, Espinosa Cigars planned on launching its first event-only cigar. The cigar was called Alpha Dawg and it was a moniker for company founder Erik Espinosa. The blend for Alpha Dawg was selected at the inaugural La Zona Palooza event. It turns out that Alpha Dawg wasn’t an event-only cigar because the line was added as a regular production cigar to the Espinosa portfolio. By 2020, the company decided it was time to introduce an event-only cigar and that is where Crema de Laranja comes in. This is a barber-pole offering that features two of the company’s signature wrappers – the Connecticut wrapper from the Espinosa Crema and the Brazilian “Laranja” wrapper from the Espinosa Laranja. Today, we dive deeper into the Espinosa Crema de Laranja.

The past 18 months are seeing more barber-pole cigars coming out of the La Zona factory. A little over a year ago, the factory produced the Fair Warning cigar, a shop exclusive for Caravan Cigar Company that features a Brazilian Oscuro wrapper and Candela wrapper. Recently, Protocol Cigars announced it is releasing its Protocol Pool Party Year 2 event cigar. This is a cigar produced out of La Zona and features an Ecuadorian Connecticut Shade and San Andres Maduro wrapper.

For now, we turn our attention to the Crema de Laranja and see what this cigar brings to the table.

In addition to the Laranja and Habano wrappers used for the barber-pole, the remainder of the blend for the Espinosa Crema de Laranja utilizes all Nicaraguan tobaccos for the binder and filler. The blend was developed by Hector Alfonso Sr.

The Espinosa Crema de Laranja is currently offered in one size – a 6 x 52 Toro. It is packaged in five-count paper boxes.

The Espinosa Crema de Laranja is not a barber-pole that has a stark contrast in color between the two wrappers, but there still is enough variance. The two wrappers did not have much in the way of oil on them. There were also some visible veins on the surface of the wrappers.

The band to the Espinosa Crema de Laranja has an orange, gold, and pale yellow color scheme. The center of the band has an orange-colored oval surrounded by white and orange rings. The center of the oval has the text “CREMA DE LARANJA” in a pale font. Surrounding the oval to the left and right is a pale-colored background with gold, orange, and black pinstripes. There is an orange stripe that horizontally goes through the pinstripes on each side of the band. On the stripe is the text “ESPINOSA CIGARS” in pale yellow. Gold and orange trim are on the upper and lower portions of the band.

Prior to lighting up the Espinosa Crema de Laranja, a straight cut was used to remove the cap. Once the cap was removed, it was on to the pre-light draw experience. The dry draw delivered a mix of natural tobacco and cream with a slight amount of cedar and citrus. I considered this a satisfactory pre-light draw. At this point, it was time to toast up the foot of the Espinosa Crema de Laranja and see what the smoking experience would lead to.

The Espinosa Crema de Laranja opened up with notes of cream, natural tobacco, and citrus. During the first third, these were the three primary notes. There were also some additional notes of black pepper present in the background on the tongue. The black pepper also was quite prominent on the retro-hale.

As the Espinosa Crema de Laranja moved through the second third, the natural tobacco and citrus notes remained grounded in the forefront. The cream diminished and by the midway point of the cigar experience, these notes had dissipated. Meanwhile, there was a slow increase in the black pepper.

The final third saw the natural tobacco and citrus remain at the forefront. The pepper notes were now a close secondary note. At no point did the cigar ever become a spice bomb. This is the way the Espinosa Crema de Laranja came to a close. The resulting nub was soft to the touch and cool in temperature.

While the Espinosa Crema de Laranja had a straight burn path and straight burn line, it did require several touch-ups along the way. The touch-ups kept the cigar on track, but there were more than I preferred. The resulting ash was silver-gray. This was an ash skewed toward the firmer side. The burn rate and burn temperature were ideal. 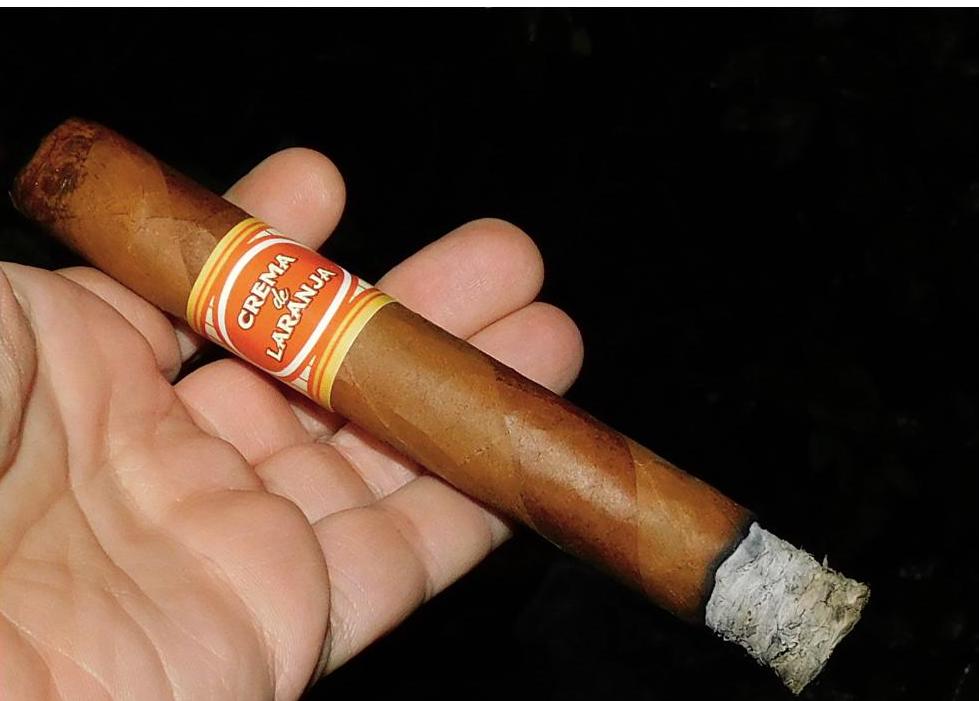 The draw to the Espinosa Crema de Laranja was open, but not loose. Normally I like a little more in the way of resistance on the draw. At the same time, this was a low maintenance cigar to derive flavor from.

As for the body, when you factor in the retro-hale, the Crema de Laranja is a solid medium. if you don’t retro-hale, you may feel the body is on the milder side. There wasn’t much variance in the intensity level of the body throughout the smoking experience.

When looking at strength versus body, the body maintained the edge from start to finish, but as the strength increased the gap closed slightly.

In recent years, I have found more event cigars have been disappointments than a pleasure to smoke. Not such the case with the Espinosa Crema de Laranja. This was a barber-pole that did exactly what it set out to do – bring together the flavors of the Crema and the Laranja in one cigar. It’s an enjoyable cigar. I think Crema and Laranja are still better standalone cigars, but Crema de Laranja is still a pleasing cigar. Because there is no MSRP, we cannot calculate a value rating. However it’s a cigar I’d recommend to any cigar enthusiast, and it’s one that I would smoke again and welcome the opportunity to get this cigar at an event with a purchase.