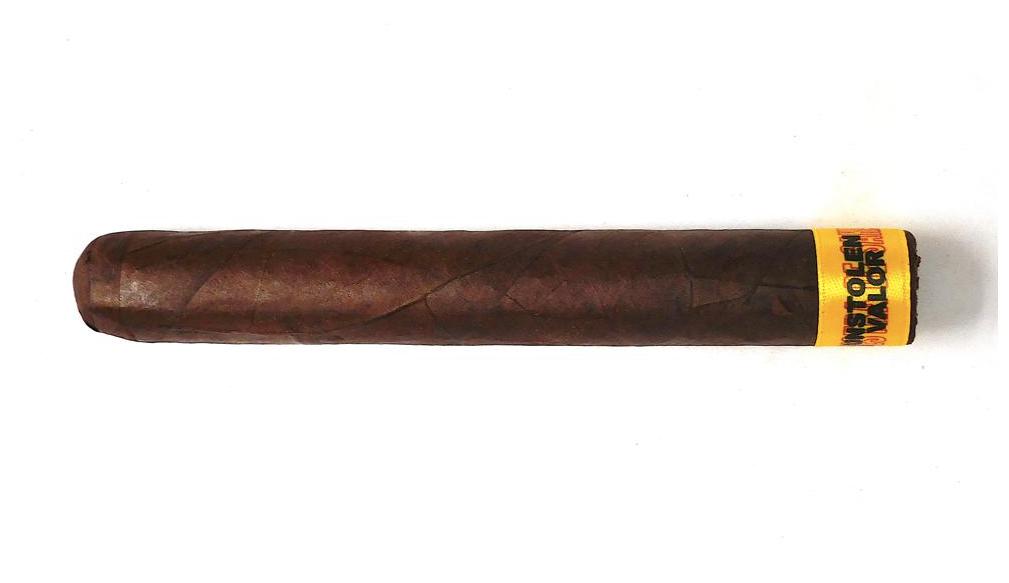 The Unstolen Valor is the fifth installment in Dunbarton Tobacco & Trust’s limited production line, Muestra de Saka. The line has been primarily positioned as a one size, one blend line for each installment. The series has also become a very personal one from Master Ligador Steve Saka. He has described this as “a line of unique blends and vitolas made in extremely limited quantities that reflect the machinations of myself.”  These are also blends that Saka has challenged himself on. Unstolen Valor, is a very different project as instead of challenging himself, Saka challenged Raul Disla of the NACSA factory to come up with a series of personal blends. Unstolen Valor is a blend that Saka felt was the best of the blends that Disla created and thus would be released as a part of the Muestra de Saka series. Today we take a closer look at the Muestra de Saka Unstolen Valor. 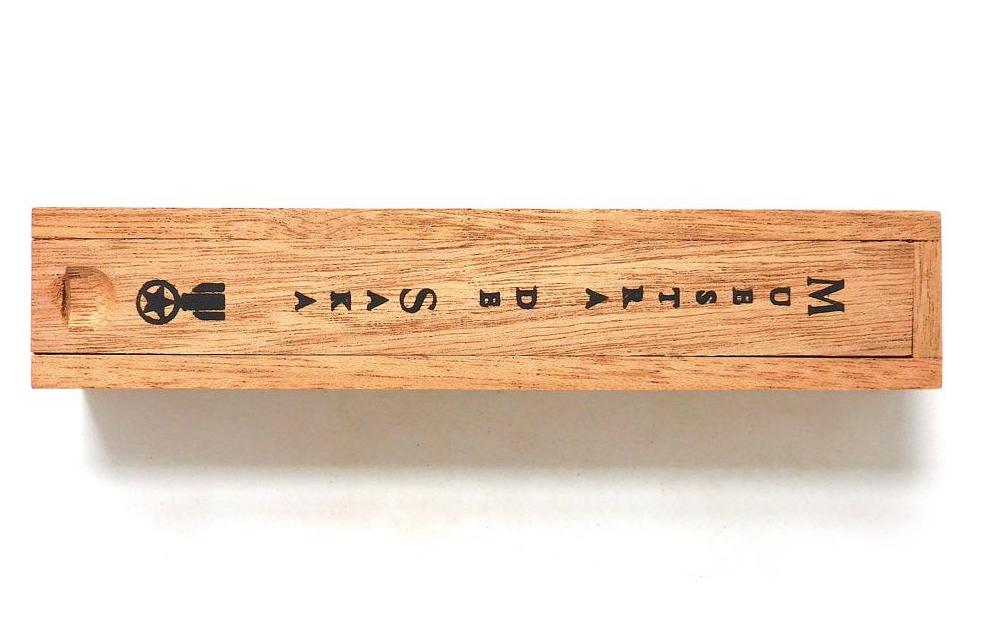 Disla is the person who oversees production at NACSA for Saka’s Mi Querida and Umbagog lines. For folks who don’t know, Disla is the brother of Esteban Disla who is a co-owner of Fabrica de Tabacos Nica Sueño S.A. in Estelí, Nicaragua.

There are currently five Muestra de Saka releases. With the exception of the Unstolen Valor, the other releases were blended by Saka and are produced at the Fábrica de Tabacos Joya de Nicaragua, S.A. faculty in Estelí, Nicaragua.

Without further ado, let’s break down the Muestra de Saka Unstolen Valor and see what this cigar brings to the table.

Not much has been disclosed about the Muestra de Saka Unstolen Valor blend other than the cigar itself is a Nicaraguan puro.

As with all Muestra de Saka releases, each Unstolen Valor is packaged in an individual coffin. The coffins are sold in 7-count boxes. 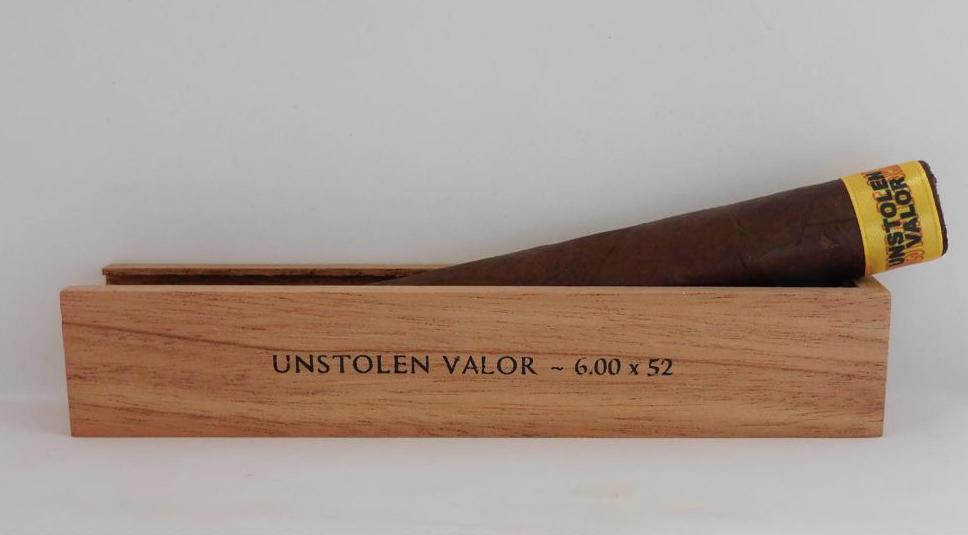 The Nicaraguan wrapper of the Muestra de Saka Unstolen Valor had a classic milk chocolate color to it. This was a wrapper that had some oils on it and was relatively smooth. There were some thin visible veins, and the darker color of the wrapper did a nice job at hiding the seams.

Consistent with most of the Muestra de Saka releases, the Unstolen Valor uses a yellow ribbon on the footer. The ribbon contains the text “MUESTRA DE SAKA” in a red stencil font. Superimposed over that text is the text “UNSTOLEN VALOR” in black font. (Note: The only Muestra de Saka that does not have a ribbon on the footer is the Unicorn – that ribbon is on the center of the cigar).

Prior to lighting up the Muestra de Saka Unstolen Valor a straight cut was used to remove the cap. Once the cap was removed, it was on to the pre-light draw phase. The cold draw delivered a mix of chocolate, nut, and a slight citrus note. For me, this cigar delivered a satisfactory pre-light draw. At this point, it was time to remove the footer band of the Muestra de Saka Unstolen Valor and see what the smoking phase would have in store.

The Muestra de Saka Unstolen Valor started with a mix of earth, mineral, black pepper, chocolate, nut, and citrus notes. As the Unstolen Valor moved through the first third, the combination of earth and mineral notes became primary. The pepper and citrus settled in the background. The chocolate and nut combination occasionally crept into the forefront; but as the cigar got deeper into the first third, this became less frequent. Meanwhile, there was an additional layer of black pepper on the retro-hale.

During the second third of the Muestra de Saka Unstolen Valor, the earth and mineral notes remained grounded in the forefront. The citrus notes remained in the more distant background. Meanwhile, the chocolate and nut combination diminished in intensity – concurrently the black pepper notes slowly increased in intensity.

The final third didn’t have much of a change. The earth and pepper notes remained in the forefront. The pepper notes were the most prominent secondary note. There also was some citrus in the background along with traces of chocolate and nut. This is the way the Muestra de Saka Unstolen Valor came to a close. The resulting nub was slightly soft to the touch and cool in temperature.

The Muestra de Saka Unstolen Valor had excellent construction and this was reflected on the assessment of the burn. The burn maintained a straight burn path and straight burn line without the need for frequent touch-ups. The resulting ash was relatively firm. This was an ash with a salt and pepper color scheme to it. As for the burn rate and burn temperature, both were ideal. 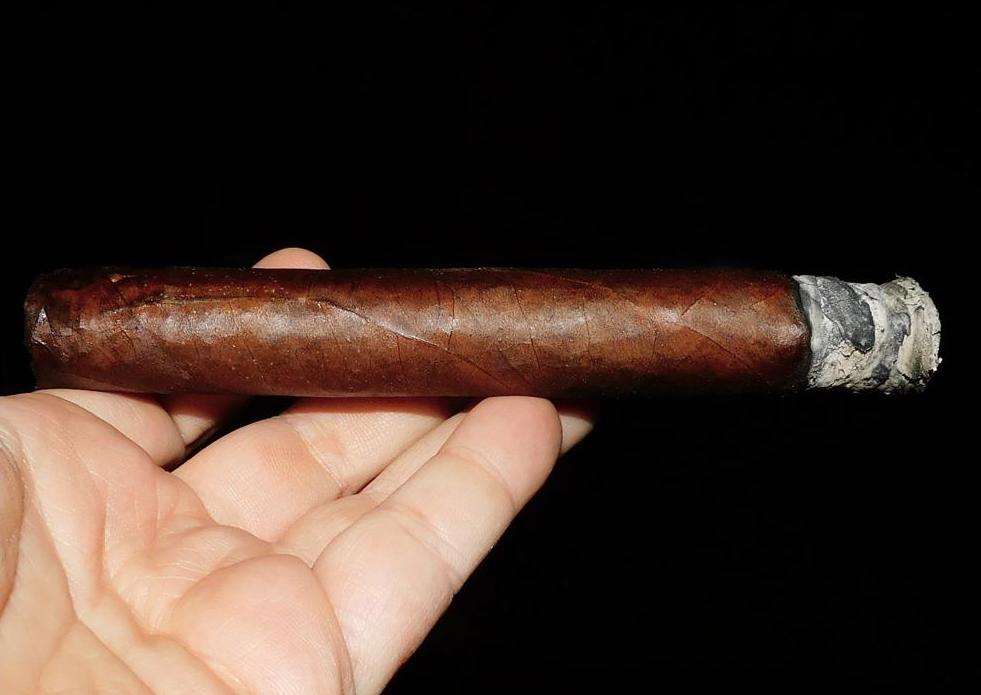 The draw to the Muestra de Saka Unstolen Valor fell into a sweet spot as it had a touch of resistance to it. If you have read other Cigar Coop assessments, you will know I prefer a draw with a touch of resistance. At the same time, this cigar produced a satisfying amount of smoke.

Overall the Muestra de Saka Unstolen Valor delivered a medium strength, medium-bodied smoking experience from start to finish. There was a slight increase in the intensity of both attributes, but in the end this was a cigar that remained in the medium range of the spectrum.

When it came to strength versus body, both attributes balanced each other nicely with neither attribute overshadowing the other.

The one problem with the Muestra de Saka Unstolen Valor is that this is a cigar that did not have a wow factor. It’s a cigar that could satisfy, but each time I smoked this cigar I was hoping it would offer something more – and it simply did not do that. The Unstolen Valor had excellent construction and a satisfying amount of complexity. It’s just I thought the flavors should have delivered a lot more in my opinion. Merit-wise, the cigar scores a respectable 88. At $17.95, this is not an inexpensive cigar, and there are other cigars in that price range that score higher that I would reach for again. In the end, Unstolen Valor is probably a cigar you want to try a sample of first.