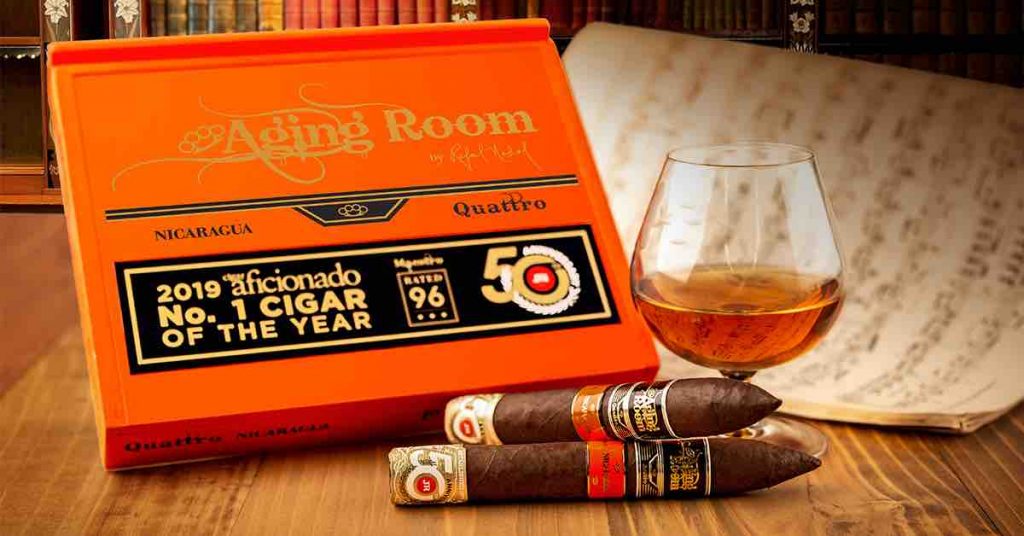 The cigar is based on the Aging Room Quattro Nicaragua Maestro, a box-pressed 52 x 6 torpedo. This vitola is well-known for winning Cigar Aficionado’s 2019 Cigar of the Year. The JR 50th version is also 52 x 6, but is a rounded torpedo. it features the same all-Nicaraguan blend including a Nicaraguan-grown Sumatra wrapper.  Aging Room Quattro is a line developed by AJ Fernandez and Rafael Nodal.

“The Aging Room Quattro Nicaragua has been one of my absolute favorite blends I have developed with AJ Fernandez,” said Nodal in.a press release. “The Quattro line has always been box-pressed, but I asked AJ to make a small number of round cigars that I could enjoy and share with close friends. The resulting cigar turned out to provide an exceptional new experience for an already exceptional blend. I could not think of a more special cigar to use for JR’s 50th Anniversary Quattro Nicaragua than the 2019 Cigar of the Year in this very rare format.”

The Aging Room Quattro Nicaragua is presented in ten-count boxes with production limited to 1,000 boxes. Pricing is set at $10.50 per cigar of $105.00 per box The cigar will be available June 8, exclusively at www.JRCigars.com.