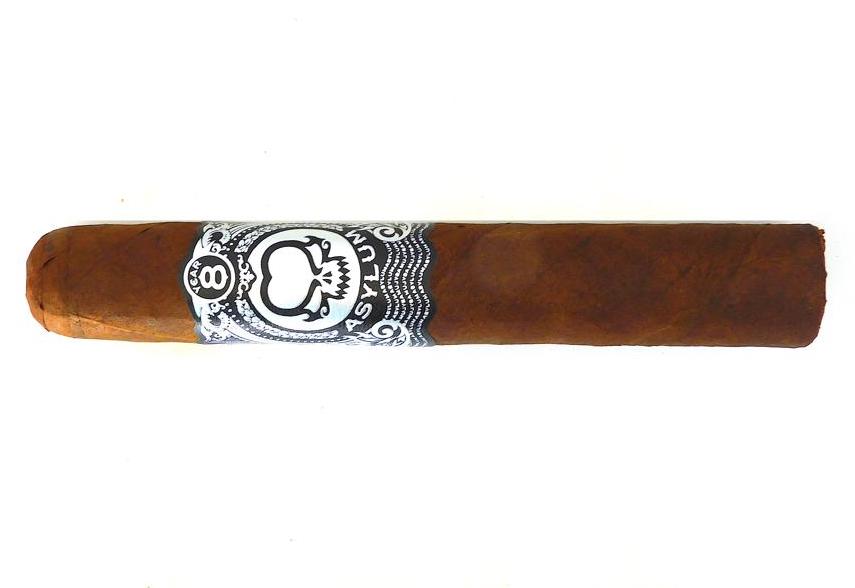 The Asylum Eight is a cigar line that celebrated the 8th anniversary of Asylum Cigars. It was back in 2012 when Christian Eiroa launched CLE Cigar Company after selling Camacho Cigars to Davidoff in 2008.  CLE would be an umbrella for several brands, some directly run by Christian himself, and others where he would partner with industry people to help them develop a brand. One of those partnerships would be with Tom Lazuka, who Christian worked with at Camacho and now was also serving as CLE’s national sales manager. That brand would be Asylum Cigars, and it would eventually soar and become one of the workhorse brands of the CLE portfolio. While it’s best known for its large ring gauge cigars, Asylum Cigars isn’t all about large ring gauges.  However, today we take a closer look as the Asylum Eight in one of those big ring gauges – a 70 x 7 Super Gordo.

Back in 2019, Asylum released its first anniversary cigar, the Asylum Seven. In particular the 70 x 7 vitola of the attention caught our attention and it resulted in being named #5 Cigar of the Year for 2020. The idea behind the Asylum Seven was to create an ultra-premium cigar geared toward enthusiasts of larger cigars. The Asylum Eight would follow, and coming soon is the Asylum Nine for 2021. The Asylum Nine is also going to feature a massive cigar that is in a 90 x 9 format – marking Asylum’s biggest cigar to date. Both Asylum Eight and the soon-to-be-released Asylum Nine follow the mantra of being geared a being a larger ring gauge ultra-premium offering. All of the anniversary cigars are packaged in individual coffins.

Without further ado, let’s break down the Asylum Eight 70 x 7 and see what this cigar brings to the table.

One thing that was unique about Asylum Seven is that it was the first Asylum to incorporate both Nicaraguan and Honduran tobaccos together into one its blends. The Asylum Eight goes back to being a puro featuring 100% Honduran tobaccos. Production for the Asylum Eight comes from Christian Eiroa’s El Aladino factory in Honduras.

The Asylum Eight is offered in two sizes – the classic 11/18 figurado associated with Christian Eiroa and the Super Gordo 70 x 7. Each cigar is packaged in an individual coffin. The coffins are then packaged in 20-count boxes. Total production for each of the two sizes is 750 boxes. 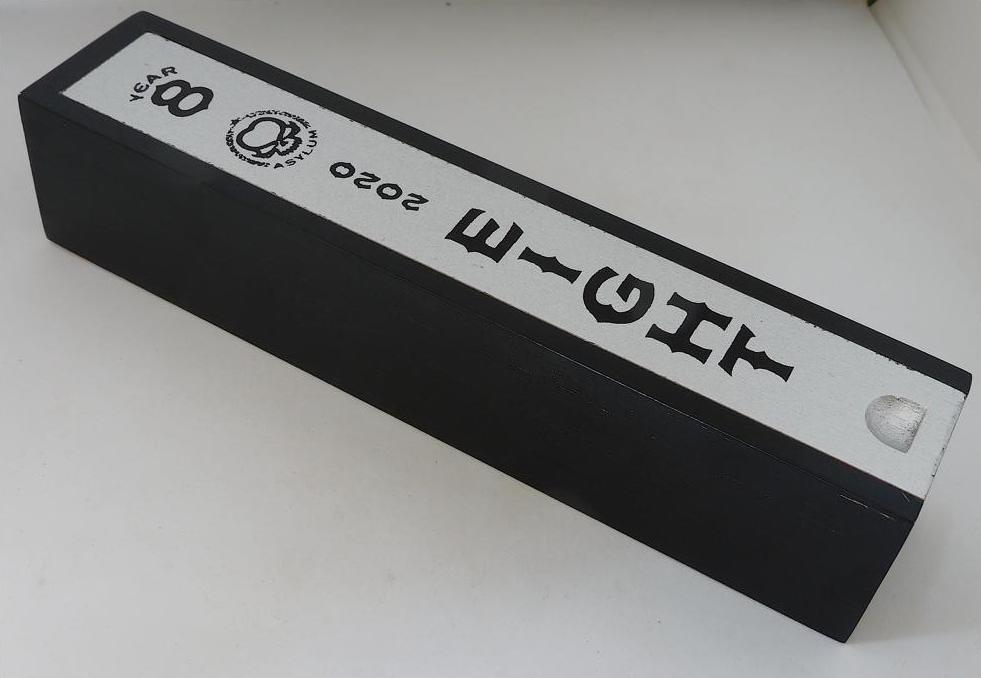 The Honduran wrapper of the Asylum Eight 70 x 7 had a cinnamon color to it. The wrapper was slightly toothy and there was not much in the way of oil on it. There also was a slight amount of mottling on the wrapper. In addition, the surface had some thin visible veins and thin wrapper seams.

When it comes to 70 ring gauges, I highly recommend the straight cut – and to get a cutter that can handle a 70 ring gauge cigar. I used my large ring gauge cutter (that handles up to a ring of 75) to place a straight cut into the Asylum Eight 70 x 7. Once the cap was removed, I was treated to notes of dusty earth, cinnamon, and natural tobacco. This was an excellent pre-light draw experience. At this point, it was time to light up the foot of the Asylum Eight 70 x 7 and await what the smoking experience would have in store.

The Asylum Eight 70 x 7 kicked off with notes of earth, cinnamon, cedar, and floral notes. Early on there was no dominant note, but eventually, the cedar and floral notes became primary. The earth and cinnamon notes settled into the background. The early stages didn’t have any pepper on the tongue, but on the retro-hale there was some black pepper with some cedar mixed in.

By the last third, the cedar notes still were grounded in the forefront. The floral and pepper notes were now the closest secondary notes. There still were some earth notes and touches of cinnamon remaining. This is the way the Asylum Eight 70 x 7 came to a close. The resulting nub was soft to the touch and lukewarm in temperature. 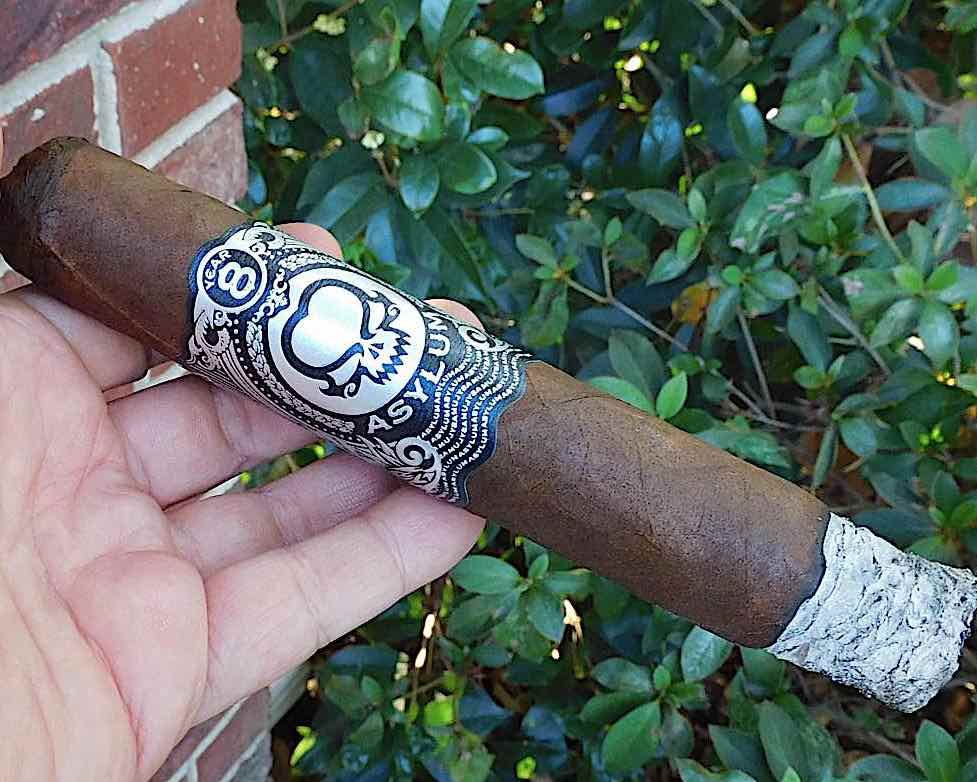 The Asylum Eight 70 x 7 started out as a medium strength, medium-bodied smoke. As the cigar progressed there was a slight increase in the strength and body. By the second half, the body progressed into medium to full territory. The strength maintained its medium level from start to finish.

In terms of strength versus body, the body held a slight edge throughout the smoking experience.

Last year when the Asylum Seven was released, I found the 70 x 7 to be one of the greatest 70 ring gauge cigars to hit the market. The Asylum Eight had high standards to meaure up to and unfortunately, it fell short. This had nothing to do with this being a 70 ring gauge (which many perceive as a negative). The big issue was the flavor profile, and the fact that I got a floral note was an immediate turn-off. Floral notes are my least favorite in a cigar and while some of the floral notes diminished in the second half – it was not enough. At $25.00, this is not an inexpensive cigar, In the end, this is a cigar I would recommend trying and seeing if it’s in your wheelhouse.