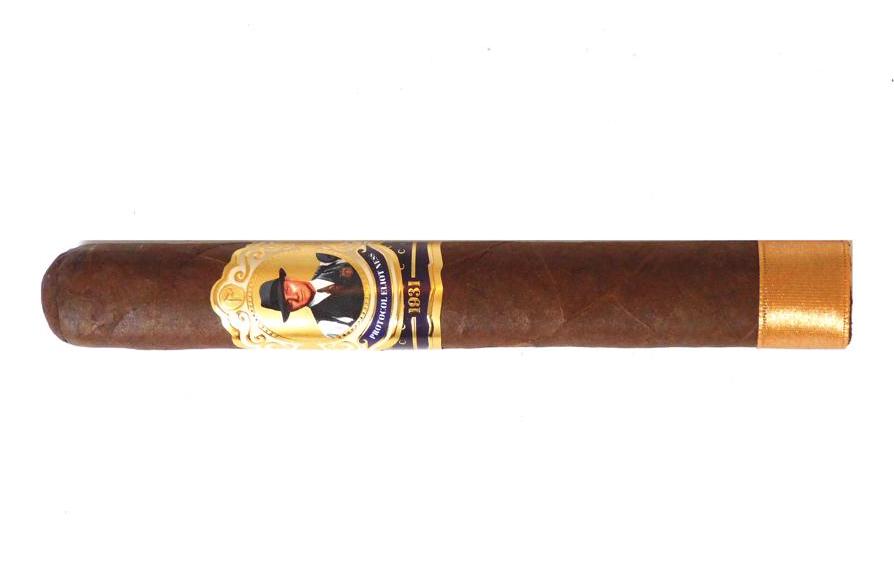 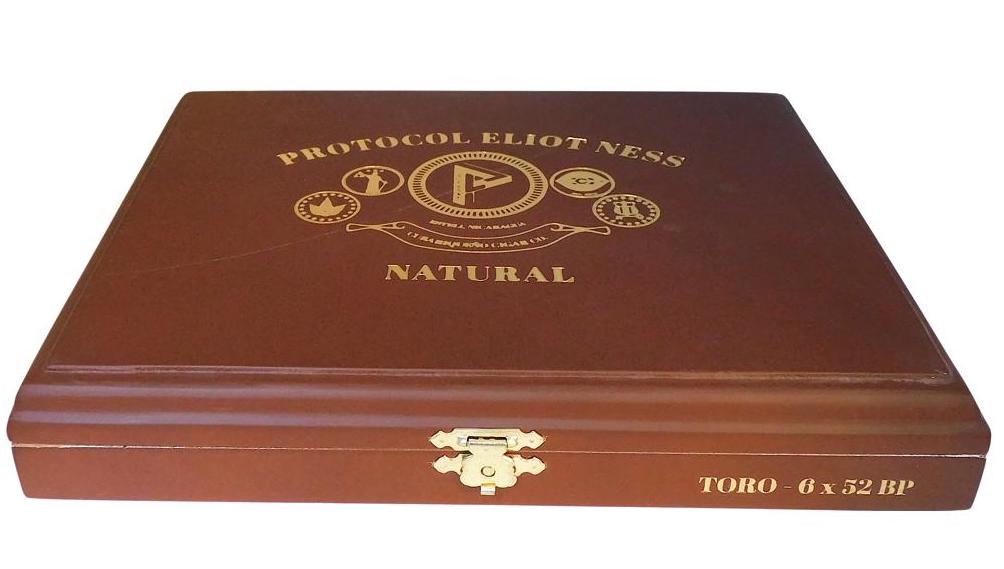 In addition to paying homage to law enforcement heroes, the Protocol Lawman Series features elegant and classical styled packaging.  Below is a list of the three Lawman Series installments to date. The first installment of the series was the Protocol Sir Robert Peel – honoring the person considered to be the father of the modern-day police force. Most recently a third installment, the Protocol Bass Reeves, was launched at the PCA Trade Show. Reeves was one of the first African-American U.S. Marshalls. All of the installments are available in both Natural and Maduro blends.

Without further ado, let’s break down the Protocol Eliot Ness Natural and see what this cigar brings to the table.

Both the Eliot Ness Maduro and the Eliot Ness Natural are 100% Nicaraguan puros. According to Protocol Cigars, neither blend incorporates ligero. The Natural cigar is highlighted by a Nicaraguan Habano wrapper.

Both the Protocol Eliot Ness Natural and Maduro offerings were launched in one size – a 6 x 52 Box Pressed Toro. Each is packaged in elegant ten-count boxes. 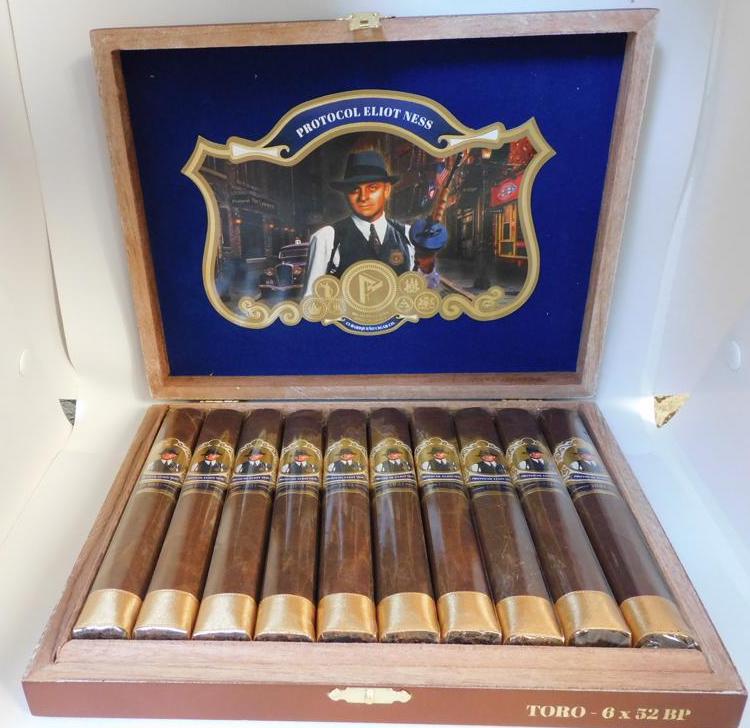 The Nicaraguan Habano wrapper of the Protocol Eliot Ness Natural had a medium brown color to it. There was a slight amount of oil on the surface. Upon closer examination, there was some very subtle mottling that could be seen on the surface. This was a relatively smooth wrapper with only a few visible veins and very thin visible wrapper seams. The cigar itself had a square press to it. 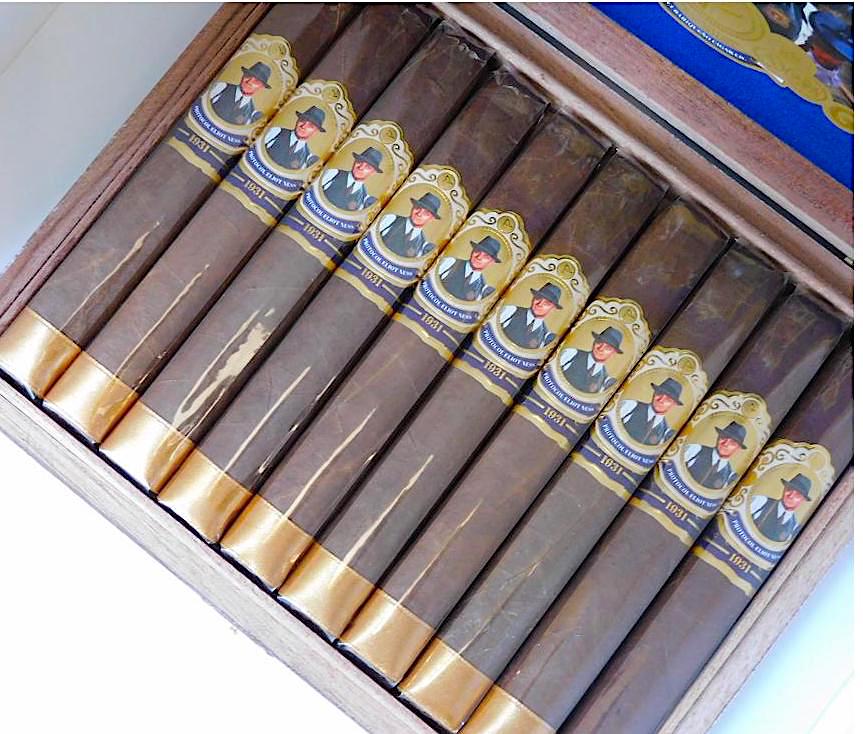 Close up of the Protocol Eliot Ness Natural

There are two bands on the Eliot Ness Natural. The primary band has a gold, indigo, and white color scheme. On the center of the band is a portrait of Eliot Ness on a gold background. Above the picture is a gold Protocol “P” on a gold circular field. Just under the picture is an indigo ribbon-like design with the text “PROTOCOL ELIOT NESS” in white font. Surrounding the portrait is a shield and a series of gold medallions. There are images on each of the gold medallions that have significance to Protocol Cigars and law enforcement in general. Co-owner Juan Cancel has referred to these as “Easter eggs.” To the left of the portrait is the text “ESTELI NICARAGUA” in white font on a maroon background while to the right is the text “LAWMAN SERIES – also in white font on an indigo background.

The primary band rests over a  secondary band. This band is indigo in color with some gold-colored “C”s arranged in a wallpaper-like fashion. The lower part of the band has the text “1931” (the year Eliot Ness had Al Capone indicted) in gold font surrounded by a gold pinstripe. The lower part of the band has a gold trim with a slightly irregular edge. A yellow ribbon surrounds the footer of the cigar.

A straight cut was used to remove the cap of the Protocol Eliot Ness Natural. Once the cap was removed it was on to the pre-light smoking phase. The dry draw was simple and straightforward delivering a mix of natural tobacco and sweetness. While it wasn’t the most exciting pre-light draw, it wasn’t a bad one either. Since the pre-light draw is not scored in our assessments, there was no loss of points here. At this point, it was time to remove the ribbon of the Protocol Eliot Ness Natural, toast up the photo and begin the actual smoking of the cigar.

The Protocol Eliot Ness Natural opened up with notes of natural tobacco, citrus, black pepper, earth, and cream. As the cigar settled into the first third, the natural tobacco and citrus notes moved to the forefront. The pepper, earth, and cream settled into the background. Meanwhile, on the retro-hale, there was an additional layer of black pepper and a slight layer of citrus.

During the second third of the Protocol Eliot Ness Natural, there was a decrease in the overall sweetness from the natural tobacco and citrus notes. The citrus notes receded into the background. There was also a reduction in the creaminess in the background. Meanwhile, the earth notes progressed into the forefront. Just past the midway point, the earth notes displaced the natural tobacco as the primary note.

By the last third, there was an increase in the pepper notes. The pepper notes closed in on the earth notes in the forefront, but didn’t quite cross the threshold. Meanwhile, notes of natural tobacco and citrus still rounded out things in the background. This is the way the Protocol Eliot Ness Natural came to a close. The resulting nub was soft to the touch and cool in temperature.

While the Protocol Eliot Ness Natural did maintain a straight burn path and have a straight burn line, this did require several touch-ups along the way to do that. The touch-ups did the trick, but there were more than I prefer. The resulting ash was light gray and skewed toward the firmer side. The burn rate and burn temperature were both ideal. 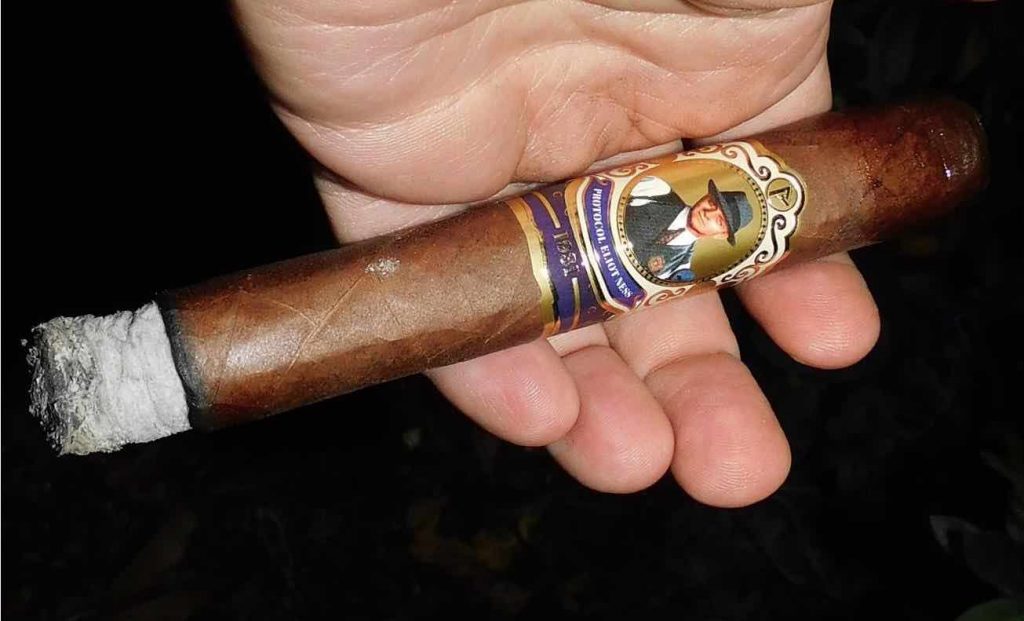 Like its Maduro counterpart, the draw to the Protocol Eliot Ness Natural was on the open side – and was more open than I prefer. Usually, I prefer a little resistance on the draw – especially on box-pressed cigars. In this case, I didn’t get that resistance, but still got a cigar that was easy to derive flavor from. The Protocol Eliot Ness Natural was also a cigar that produced ample amounts of smoke.

There wasn’t much in the way of variance in the intensity levels of this cigar. When looking at strength versus body, the body definitely had the edge.

When I was going into the assessments of both the Protocol Eliot Ness Maduro and Natural, I had heard a lot of fanfare of the Maduro cigar. This cigar seemed to be the favorite of the two by many. While the Maduro was a fine cigar, I found the Protocol Eliot Ness Natural offering to be a superior cigar. It wasn’t that it had a radically new flavor profile, but the flavors produced were quite tasty. This is definitely a blend that I’m curious to see how it respond to aging. At around $11.95, this is not an inexpensive cigar, but one that delivers a solid experience. I can recommend it to an experienced cigar enthusiast as well as to a novice looking for something in the medium-plus range. As for myself, this is a cigar I’d smoke and buy multiples for the humidor. At 90 points, this cigar reaches the Cigar Coop Standard of Excellence threshold.