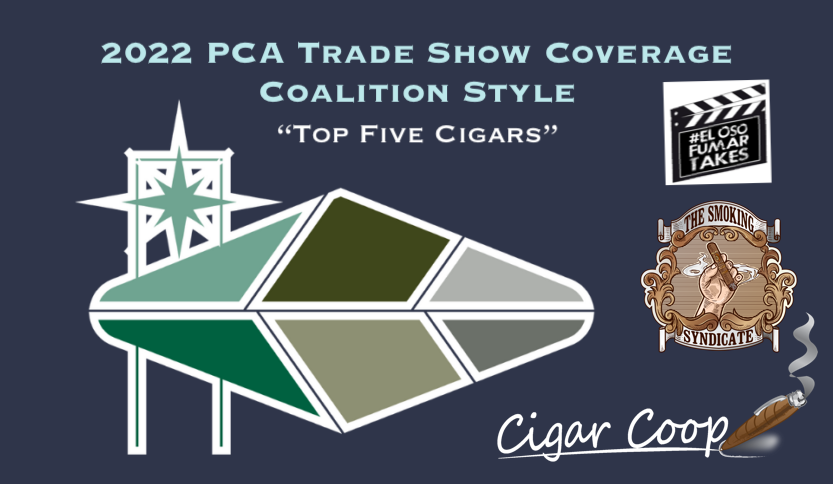 Every year, we are asked what our favorite cigars of the Premium Cigar Assocation (PCA) Trade Show are. This year, the four members of the Cigar Coop Coalition decided to write about our new favorite cigars from the 2022 Trade Show.

It is important to know that these are pretty much first impressions of upcoming releases. We also did not smoke every cigar in every size. In all of these cases, they were based on Trade Show samples, and in the end, this may not be indicative of performance once the cigars are released. We all had different criteria, and we wanted to keep the individuality of our picks in place. You may notice that I personally went with regular (non-limited) production cigars.

We opted not go with vitola-specific picks here, but this should help give a barometer of what we enjoyed.

Where there is an asterisk (*), it means the member of the team picked this cigar as a Top 5 Impactful cigar prior to the Trade Show.

“Like my Impactful Cigar predictions, I opted to focus on regular production cigars as I think these have the best chance of impact long-term. There were no honorable mentions here as I wanted to avoid participation trophies.” – Will Cooper

“As selfish as some of these choices may be there are a lot of smaller company releases that impressed me quite a bit. Two that come to mind that miss this list are the Patina Sumatra and Howard G’s additions to the Black Moses and Magic Stick lines. However, the determining factor for this list was not only personal palette, but larger scale market impact.” -Bear Duplisea