“The Casa Magna Liga F Churchill is another hit that comes out of this factory. It delivers the total package: flavor, complexity, and excellent construction.” 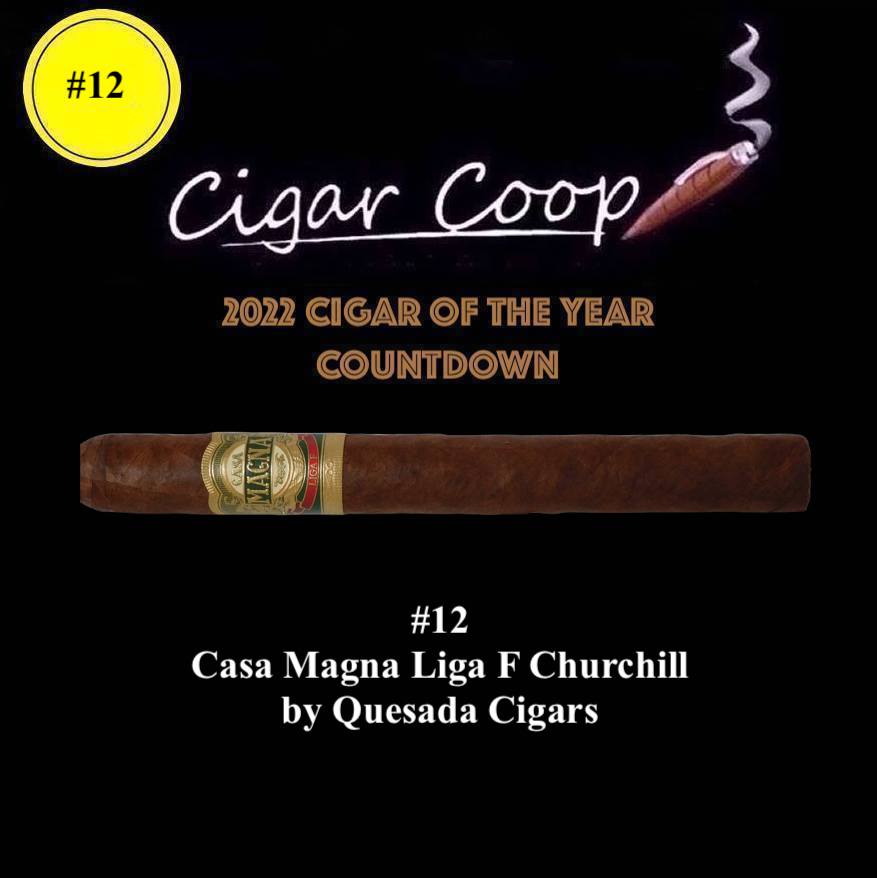 Coming in at #12 is the Casa Magna Liga F Churchill by Quesada Cigars. Back in 2008, Manuel Quesada teamed up with Nestor Plasencia to release a cigar to be sold under the Quesada Cigars portfolio known as the Casa Magna Colorado. The cigar was met with critical acclaim and commercial success and is widely considered to be one of the most successful collaborations in history. Over the years, Quesada Cigars has grown Casa Magna into a full-fledged brand. Most recently Quesada has been taking over production of the offerings under the brand. One of the more recent offerings that was added to Casa Magna brand was the Liga F in 2021.

Liga F stands for Liga Fuerte and fuerte is Spanish for “strong.” The Casa Magna Liga F is meant to be a stronger and bolder expression for the brand. The blend for the Casa Magna Liga F features a sun-grown Ecuadorian Corojo wrapper. There are Dominican tobaccos used for binder and filler. In addition, some Nicaraguan tobaccos are incorporated into the filler. The Churchill size that lands on the countdown is a thicker expression of a Churchill measuring 7 x 50.

The Casa Magna Liga F does its job in terms of being bolder. While the cigar started out with medium strength and medium to full body, by the time the smoking experience reaches the final third, it’s delivering full strength and full body. This is a complex cigar with plenty of flavor nuances and flavor transitions. Notes include: sweet bread, natural tobacco, creamy almond, earth, cedar, baker’s spice, classic wood, and pepper. The cigar totally fires on all cylinders – flavor, construction, and complexity.

For Quesada Cigars, this is the eighth year the company has placed a cigar on a Cigar Coop Countdown, including three years in a row. This is the third Dominican-made cigar to land on this year’s Countdown and it gives the TABADEX factory a second cigar on the Countdown.