The 262 Revere line was launched at the 2012 IPCPR Trade Show in Orlando, Florida.  The cigar has proven to be a winner for company president Clint Aaron.  2013 has seen Aaron focus on solidifying the Revere line.  It was prior to the 2013 IPCPR Trade Show when Aaron announced he would be adding his beloved lancero vitola size into the line. However, it was earlier this year when another vitola was added- this one a lonsdale.  This lonsdale is a limited edition, retail-exclusive to J. Shepherd Cigars in Louisville, Kentucky. J. Shepherd is owned by Jason Shepherd and has proven to be a very strong shop in terms of the 262 line. Recently, I had an opportunity to smoke some of these 262 Revere Lonsdales.  I found the lonsdale format to work beautifully on the 262 blend – making for an outstanding cigar experience.

The 262 Revere became 262 Cigars third core line.  It marked the first Nicaraguan puro to be produced by the company.  The company has been producing solid blends for several years now, but we felt they hit the jackpot with the Revere blend.  Last year, the line finished as our #14 Cigar of 2012.

Let’s break down the 262 Revere Lonsdale and see what this cigar brings to the table: 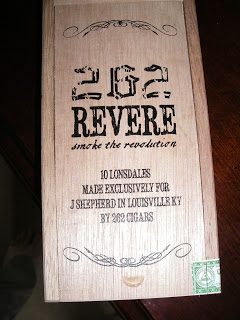 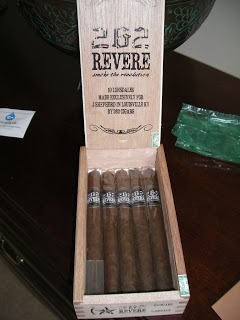 The wrapper of the 262 Revere Lonsdale has a rich milk chocolate color to it with a slight bit of colorado red in it.   This wrapper seemed less oily than the robusto sizs I’ve smoked. At the same time there were more visible wrapper seams and more visible veins.  Overall the 262 Revere Lonsdale’s wrapper has a nice charm to it.  There is a small pig-tail on the cap.

The 262 Revere features a band with a black, silver, and white color scheme.  The band is primarily black with silver trim.  Prominently showcased on the band is the text “262” with “REVERE” right under it in a modern styled white font.  Below that text is the 262 slogan “smoke the revolution” in a smaller white font.

For my smoking experience of the 262 Revere Lonsdale, I opted to go with a straight cut as opposed to pulling off the pig-tail on the cap.  I then proceeded to begin with the pre-light draw. For the Lonsdale, there seemed to be a less spice on the dry draw than on the Robusto.  Most of the dry draw provided notes of natural tobacco and coffee.  Overall I considered this to be a positive pre-light draw experience.  At this point I was ready to light up the 262 Revere Lonsdale and see what the overall smoking experience would deliver.

The 262 Revere Lonsdale did have its parallels to some of the other vitolas in the line.  At the same time, it had its own unique characteristics.

The start to the 262 Revere lonsdale had mix of coffee, natural tobacco, and some pepper spice. The natural tobacco notes had an earthy quality to it. Like the pre-light, the pepper spice seemed a little dialed back on the Lonsdale. At the same time, the pepper was prominent on the retro-hale. Throughout the first five percent there were some hints of chocolate that could also be detected.

As the 262 Revere Lonsdale moved progressed through the first third, the coffee notes were still very much present. The background flavors had the earth and pepper notes.  Some notes of cream and citrus could also be detected in the background as well.

In the second third, the earth/natural tobacco notes and coffee could both be prominently detected.  The pepper notes did increase somewhat, and could also be detected in the forefront.  There was still some cream and citrus in the background – balancing the flavors nicely.

In the last third, the flavor profile did get a little more on the peppery side.  While the pepper wasn’t overwhelming, there was a little bit of harshness at the end of the smoke.  The resulting nub was soft to the touch, but cool in temperature.

I’ve always found the 262 Revere line to be consistent in terms of its construction, burn, and draw – and the Lonsdale remained consistent with these attributes.  The burn pretty much as close to perfect as you can get. The burn line required minimal touch-ups along the way – and pretty much remained straight from start to finish.  The resulting ash was tight with a nice white color.  The ash was not prone to any flaking or flowering.  The burn rate and burn temperature were ideal.

The draw had a touch of resistance – something that is ideal in my book as well.  This made for an enjoyable smoke from start to finish.

From a strength perspective, I found the 262 Revere Lonsdale to fall in line with the other vitolas of the line.  I assessed it to be a medium to full strength cigar.  As for the depth of the flavors, I felt the Lonsdale shape really helped make the flavors deeper on this particular blend.  I assessed the 262 Revere Lonsdale to qualify as a full-bodied smoke.  Overall,  while I thought the strength and body of the Lonsdale countered each other nicely, I gave a slight edge to the body here.

As I said in the introduction, I felt the 262 Revere Lonsdale makes an excellent vitola for this particular blend.   More importantly, I think it shows that this is a very good blend – that has a lot of possibilities in terms of frontmark offerings.  For the most part, Aaron has kept things more traditional with his vitola offerings – and it seems to be paying off for him.  While the lancero is coming, this limited edition, retail exclusive lonsdale is really worth checking out while it is still available.  This is the type of cigar I’d recommend to a novice cigar enthusiast looking to try a lonsdale something on the fuller,  yet not overpowering side.  I’d also recommend this to an experienced cigar enthusiast – especially those who like Nicaraguan tobacco.  Like the robusto, this is definitely a cigar I’d consider a box-purchase for.