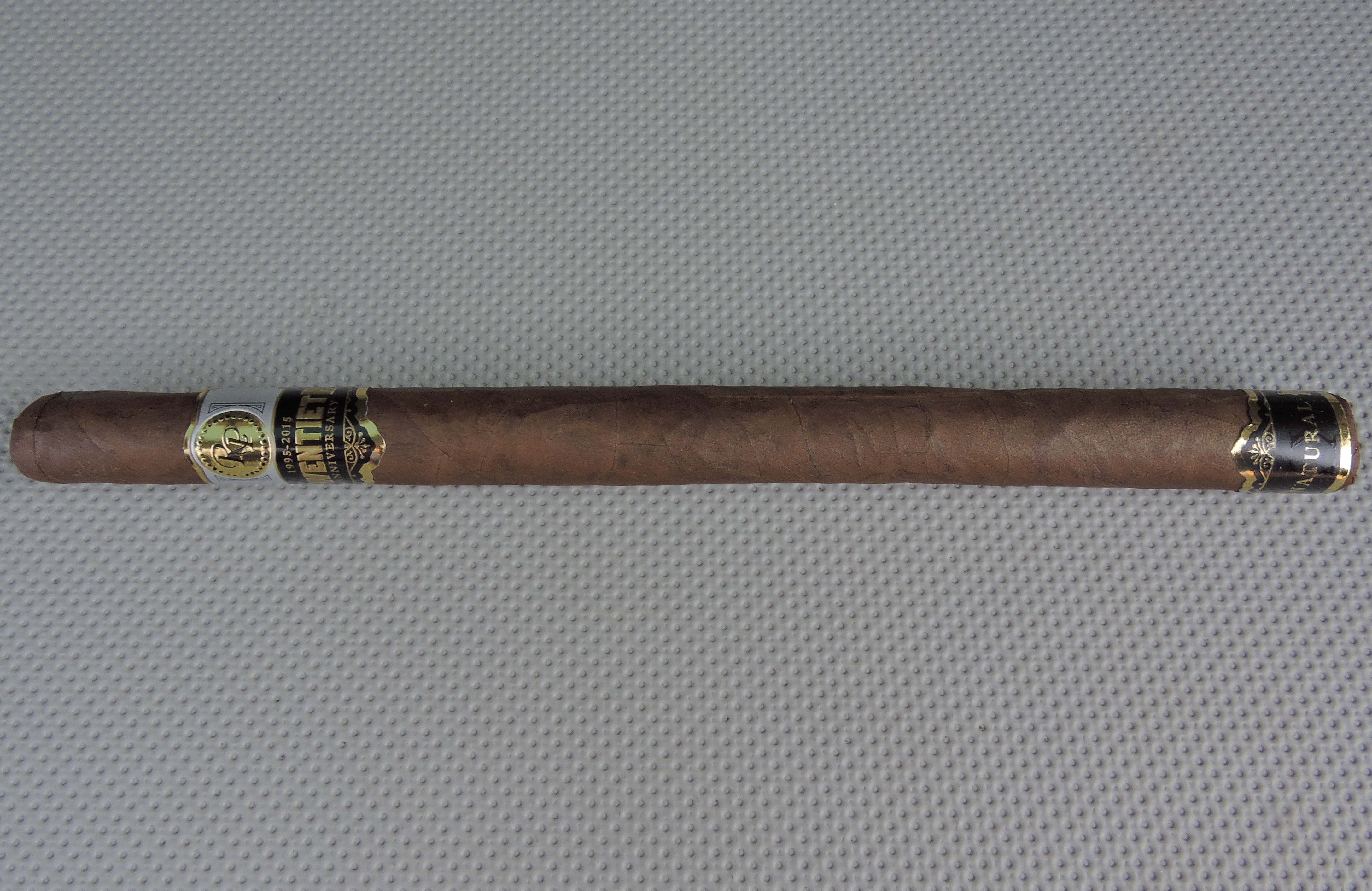 Commemorative occasion cigars are nothing new to the cigar industry – and they certainly are not a new concept to Rocky Patel Premium Cigars. In fact when it comes Rocky Patel’s commemorative cigars, these are been among some of the company’s most successful releases. Two of the company’s most successful regular production releases have commemorated milestones for company founder Rocky Patel – the Rocky Patel Decade (marking 10 Years in the cigar business for Patel) and the Rocky Patel Fifteenth Anniversary (marking 15 Years for Patel). With 2015 marking twenty years in business for Patel, it was anticipated for sometime this year would bring a 20th Anniversary Cigar. Just prior to the 2015 IPCPR Trade Show, the Rocky Patel Twentieth Anniversary was announced to commemorate this occasion. This is a project that had been in the works for the past four years. Recently I’ve had an opportunity to smoke this cigar in the lancero format. Overall, I found this to be one of the standout cigars released by the company in 2015 and a blend that shines in lancero size.

The Rocky Patel Twentieth Anniversary was one of three major releases by Rocky Patel Premium Cigars at the 2015 IPCPR Trade Show. It joined the new Rocky Patel Sun Grown Maduro and the Tabaquero by Hamlet Paredes (a blend created by new brand ambassador Hamlet Parades). Earlier in 2015, the company also released the barber pole Rocky Patel Edge A-10 to commemorate ten years of the Edge brand.

Without further ado let’s take a closer look at the Rocky Patel Twentieth Lancero and see what this cigar brings to the table.

Much of Rocky Patel Premium Cigars’ production has come out of Honduras over the past twenty years. Therefore, it was only natural that the Rocky Patel Twentieth Anniversary come out of the company’s El Paraiso factory Honduras.

There are five sizes to the Rocky Patel Twentieth Anniversary. Each are packaged in twenty count boxes. The line primarily offers box-pressed vitolas, however the lancero is a traditional parejo shape. 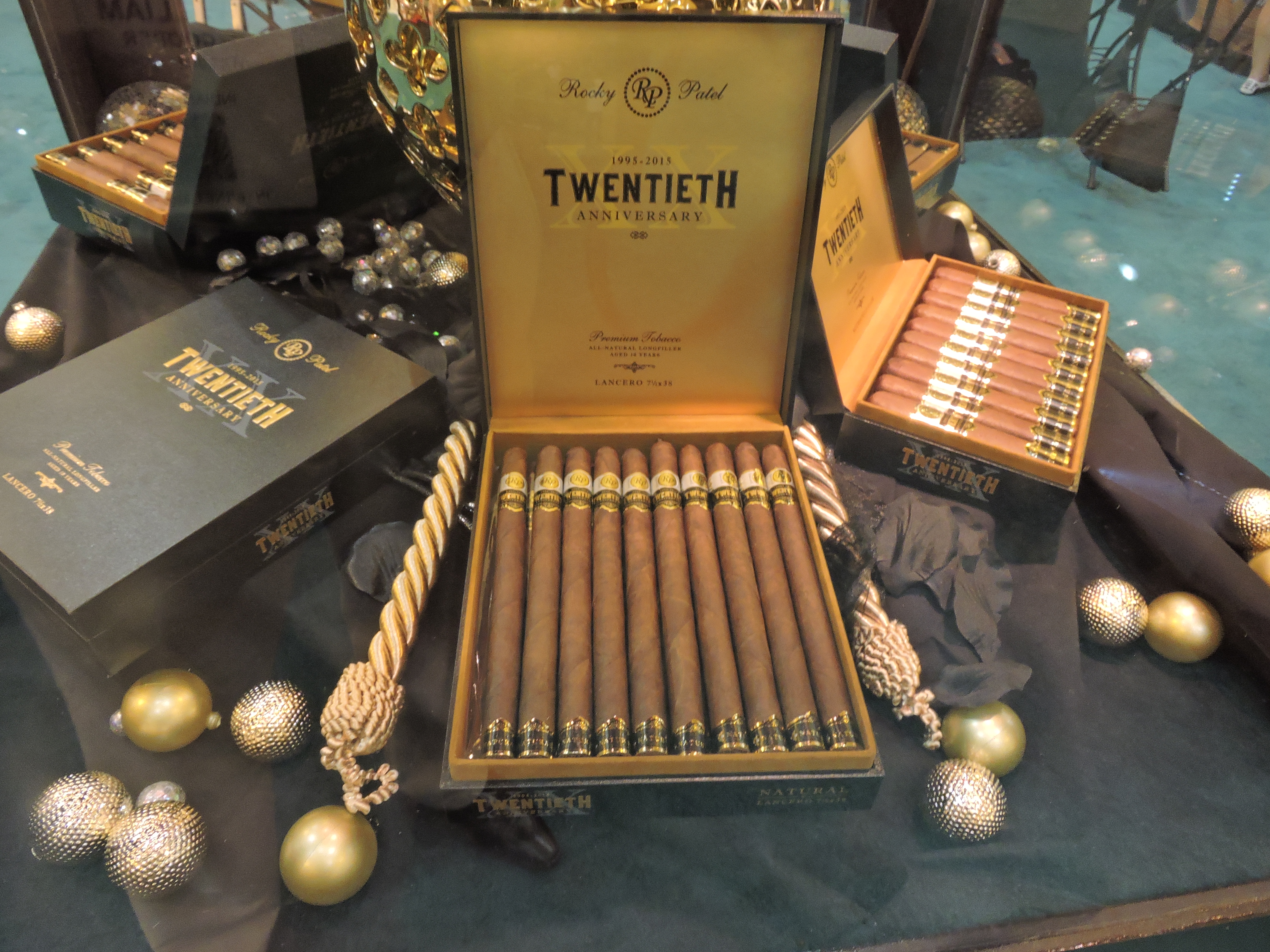 The Honduran wrapper of the Rocky Patel Twentieth Lancero has almost a milk chocolate color to it. There is some oil on the surface of the wrapper. While there are some visible veins and visible thin wrapper seams, I found this particular lancero to be on the smoother side. There is a very short pig-tail on the cap.

There are two bands on the Rocky Patel Twentieth Anniversary. The primary band features a gold colored Rocky Patel “RP” circulos logo with black font. The logo sites on a silver marquee-like background that is surround by gold, black, and silver adornments to the left and right. Below the marquis is the text “1995 – 2015 TWENTIETH ANNIVERSARY” on three lines in gold font sitting on a black background (with the text “TWENTIETH” the largest). To the far right is the text “XX YEARS AND COUNTING” in black font on a silver background. The remainder of the band has gold and black adornments.

The footer band is black with gold trim. The text “NATURAL” appears in gold font. There had been some talk of a Rocky Patel Twentieth Anniversary Maduro before the IPCPR Trade Show, but ultimately it was a Natural blend that was released. The remainder of the band has gold and silver adornments.

The start to the Rocky Patel Twentieth Anniversary Lancero started out with white pepper, dusty-earth notes, and a slight floral note in the background. The dusty-earth notes quickly moved to the forefront and became a primary flavor. The retro-hale had a mix of qualities of black pepper and cedar.

During the first third, the primary notes in the forefront morphed from the dusty-earth notes to notes of cocoa powder and nut. The cocoa powder quality gave the lancero just the right amount of sweetness. In the background, the background notes changed too. While the white pepper remained, the floral notes were replaced by char and a citrus / orange rind notes.

During the second third of the Rocky Patel Twentieth Anniversary Lancero, I found the cocoa and nut notes remained primary. The citrus / orange rind note increased and from time to time moved into the forefront. I found the citrus / orange rind contributed for what made a nice balance of flavors – adding a touch more sweetness and a slight bitter note. Meanwhile the char and white pepper notes remained in the background, but pepper notes started to increase later in the second third.

By the last third, I found a return of the earth notes into the forefront. The white pepper was now prominent in the forefront. There still was some cocoa and nut in the background and to a lesser extent some orange rind. The char notes had pretty much dissipated. Toward the end, there was slight amount of harshness, but this was an indicating it was time to bring the cigar experience of the Rocky Patel Twentieth Anniversary Lancero came to a close. The resulting nub was firm to the touch and cool in temperature.

Overall I found the Rocky Patel Twentieth Anniversary Lancero to be a well-made cigar – and this reflected nicely on the burn and draw. The burn path remained straight from start to finish. On each sample, there was slight amount jaggedness very early on, but this straightened out quickly and this became a low maintenance burn. The resulting ash was a light gray – almost white color. The ash was tight and firm and came off the cigar in clean chunks. The burn temperature to this cigar was ideal. I did find this cigar had a little quicker burn rate than I like, but this had no adverse effects other than shorten the smoking time.

The draw performed stellar. This cigar had a touch of resistance to it – which is something I enjoy on a cigar. The cigar produced an ample amount of smoke throughout the smoking experience.

Strength-wise, the Rocky Patel Twentieth Anniversary Lancero is not going to be a power-bomb. I found this cigar to be right in the middle of the spectrum – maintaining medium strength from start to finish. As for the flavors, I found they started out medium-bodied. I did find the flavors increased  n depth along the way and by the second half, the Twentieth Anniversary Lancero had just enough strength to be considered medium to full-bodied. In terms of strength versus body, I found the body to have a slight edge.

When I first smoked the Rocky Patel Twentieth Anniversary blend – I immediately felt this was “classic Rocky Patel” with the cocoa, nut, and sweet notes that this cigar delivered. While I normally would not call a lancero my vitola of choice, I did find with the Twentieth blend in the lancero format worked beautifully. I found the sweetness level to dial back a little from the larger box-pressed sizes – and the complexity of this blend is allowed to shine. This is a great addition to the Rocky Patel portfolio and adds another excellent commemorative cigar. This is a cigar I could recommend to either a novice or experienced cigar enthusiast. It’s a cigar I’d recommend to the lancero enthusiast, and one I’d also encourage someone who is not a lancero enthusiast to try. As for myself, this is not only a cigar I’d smoke again, but one worthy of a box purchase.