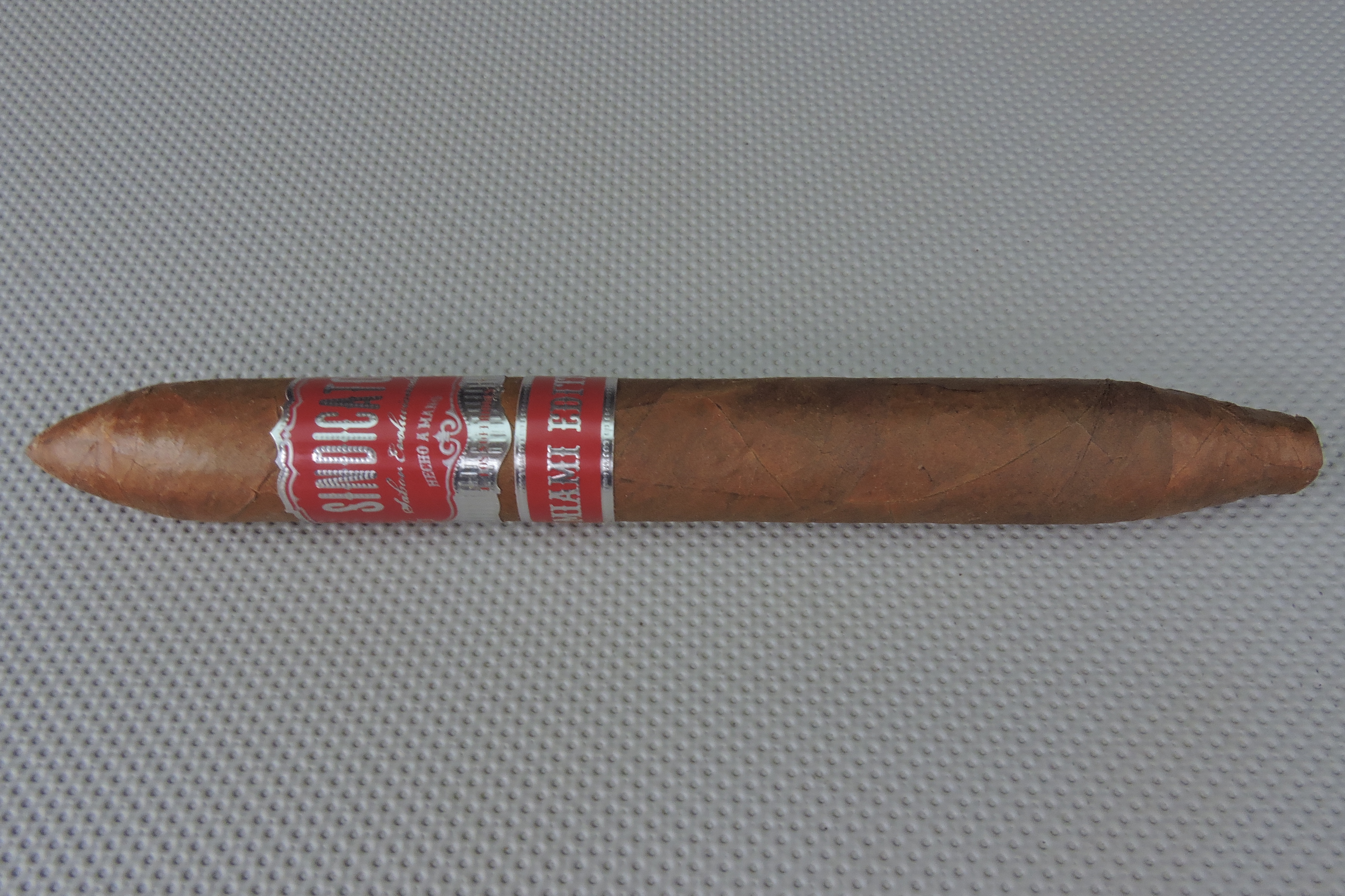 Sindicato Cigars was officially launched in March, 2013. The company is being started by a group of 45 leading cigar retailers who joined together to enter the manufacturing side of the business. In its press release, the company said the goal was to “create a cigar company whose mission is to put the tobacco retailer and its customers first.” The company has launched four lines: Casa Bella, Hex, Affinity, and Sindicato. The Sindicato line is the company’s most premium offering.

Without further ado, let’s break down the Sindicato Miami Edition 2015 and see what this cigar brings to the table.

The story behind this blend is that it utilizes tobaccos for the binder and filler similar to the Sindicato Maduro. The wrapper is a Shade Grown Jalapa Corojo – the same wrapper used on the Sindicato Natural. 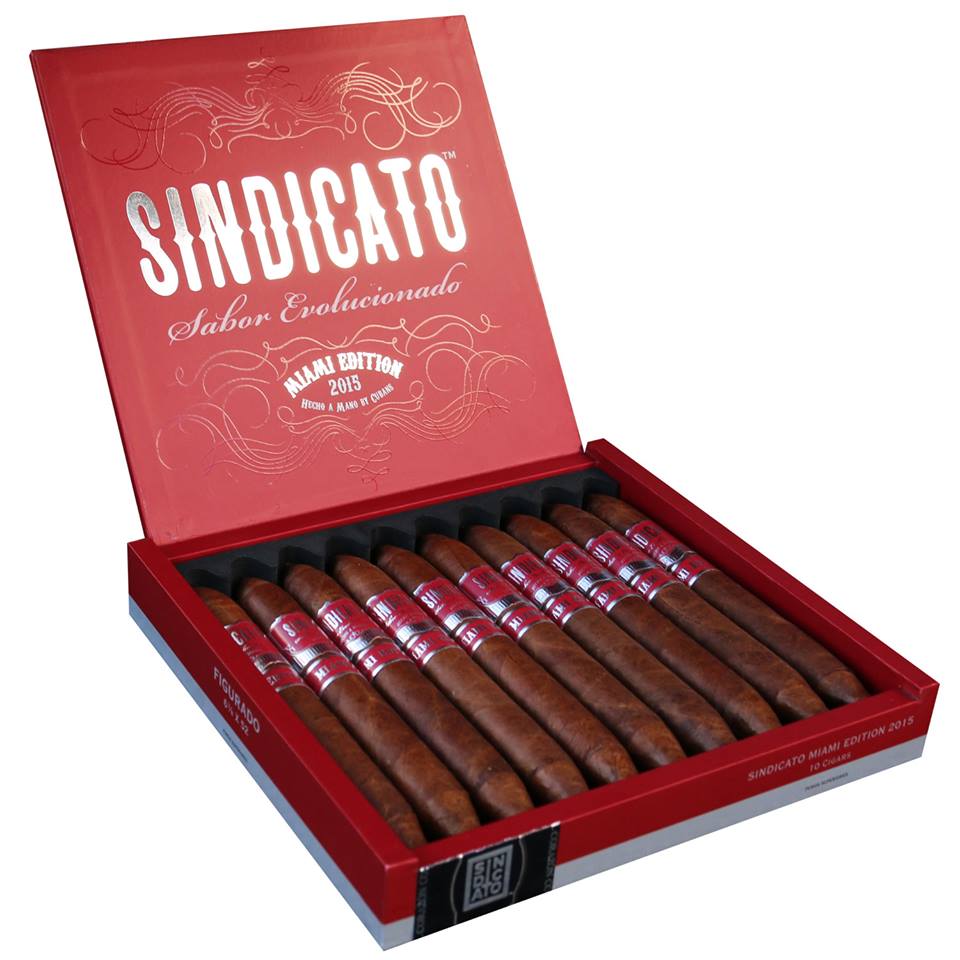 The Sindicato Miami Edition 2015’s Shade Grown Jalapa Corojo wrapper has a medium brown color. The wrapper has a woody look to it. When examined closely, some darker marbling can be seen on the surface. There is a light coat of oil on the surface on the wrapper.  The surface of the wrapper has some thin visible veins and most of the wrapper seams are also on the thin side. The footer to the cigar has a nozzle shape to it, while the cap is tapered similar to a belicoso. The is a straight salomon and doesn’t have the “bulge” often seen on many cigars of this vitola type.

The band to the Sindicato Miami Edition 2015 has two bands. The primary band has an art-deco red background with chrome font. The design is similar to Sindicato Natural and Sindicato Maduro offerings. The band is highlighted by a large art deco red shield with chrome trim on the front of the band. The text “SINDICATO” is in large chrome-colored font on the shield. Just below that text is the text “Sabor Evolucionando” (which translates to “evolving taste”) in chrome cursive font. Toward the lower part of the shield is the text “HECHO A MANO” in chrome font. There is a thick chrome trim toward the bottom of the band and features the text “PUROS SUPERIORES” in small art-deco red font.

The secondary band also has a art-deco red color bad. On the band is the text “MIAMI EDITION 2015” in chrome font. This band is finished with chrome trim on the upper and lower portions.

Given the Sindicato Miami Edition 2015 has a belicoso-shaped tip, I defaulted to a straight cut. As I have being doing with all of my figurados and salomons, I used my Credo Special T cutter with the 36 ring gauge hole to get an ideal cut for this salomon. Once the tip was removed, I moved on to the pre-light draw phase. The cold draw provided a mix of wood, natural tobacco, and floral notes. Overall, it wasn’t the most exciting pre-light draw, but it was not a bad one either. Since the pre-light experience is not factored into the final rating or score, there was no loss or gain or points here. At this point I was ready to light up my Sindicato Miami Edition 2015 and see what the cigar experience would have in store.

During the first half of the Sindicato Miami Edition 2015, the wood and natural tobacco notes alternated in the forefront. By the midway point, the citrus notes started to diminish further into the background. Later in the second third, the wood notes developed into a more classic cedar note – joining the natural tobacco notes in the forefront. At the same time, the pepper notes started to increase in intensity.

During the last third, I found the pepper and cedar notes to be in control. There was still some natural tobacco sweetness in the equation and the citrus had dissipated. The Sindicato Miami Edition 2015 had plenty of spice toward the end, but no harshness. The resulting nub was cool in temperature and firm to the touch.

On each of the samples smoked, the Sindicato Miami Edition did require a little more tlc in terms of touch-ups during the first half. There was some unevenness on the burn line and I felt the corrections were necessary to keep the burn on track. By the second half, the burn self-corrected itself and didn’t need an excessive amount of touch-ups. The resulting ash had a salt and pepper color to it. The ash wasn’t overly firm and there was some flaking throughout the smoking experience from the ash. The combustion performed well as this cigar had an ideal burn rate and ideal burn temperature. 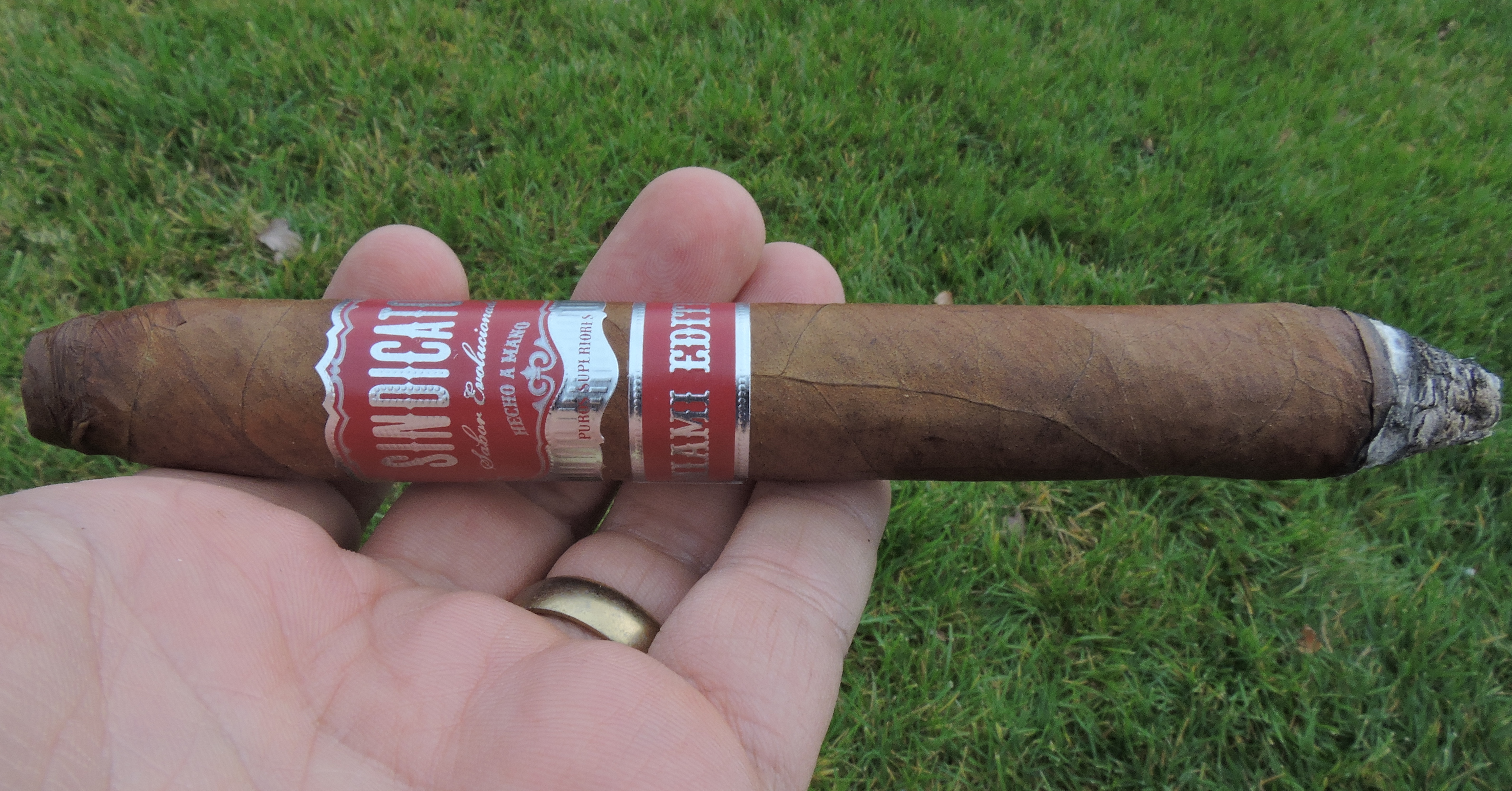 Burn of the Sindicato Miami Edition

The draw to the Sindicato Miami Edition 2015 had a touch of resistance – which is something I like. This resistance was subtle and it didn’t impact this from being a low maintenance cigar to derive flavor from.

The Sindicato Miami Edition 2015 is a cigar that is going to have some boldness and kick. This cigar started out as a medium to full strength, medium to full-bodied smoke. Throughout the smoking experience, both attributes increased in intensity. By the second half, the Sindicato Miami Edition was in full strength, full-bodied territory. In terms of strength versus body, I found both attributes balanced each nicely in the first two thirds, but by the last third, I gave a slight edge to the strength.

The Sindicato Miami Edition 2015 is not going to be a flashy cigar. It’s not going to provide a revolutionary new flavor profile. Instead, it’s going to deliver a lot of classic cigar flavors. While the burn required a little more maintenance than I prefer earlier in the smoke, I did find the salomon format worked quite well with this blend. Given this is a bolder and fuller cigar, it is one I would recommend to a seasoned cigar enthusiast who prefers a cigar in this profile. As for myself, I enjoyed this cigar.  It’s one I would smoke again, and it’s worthy of a box split.