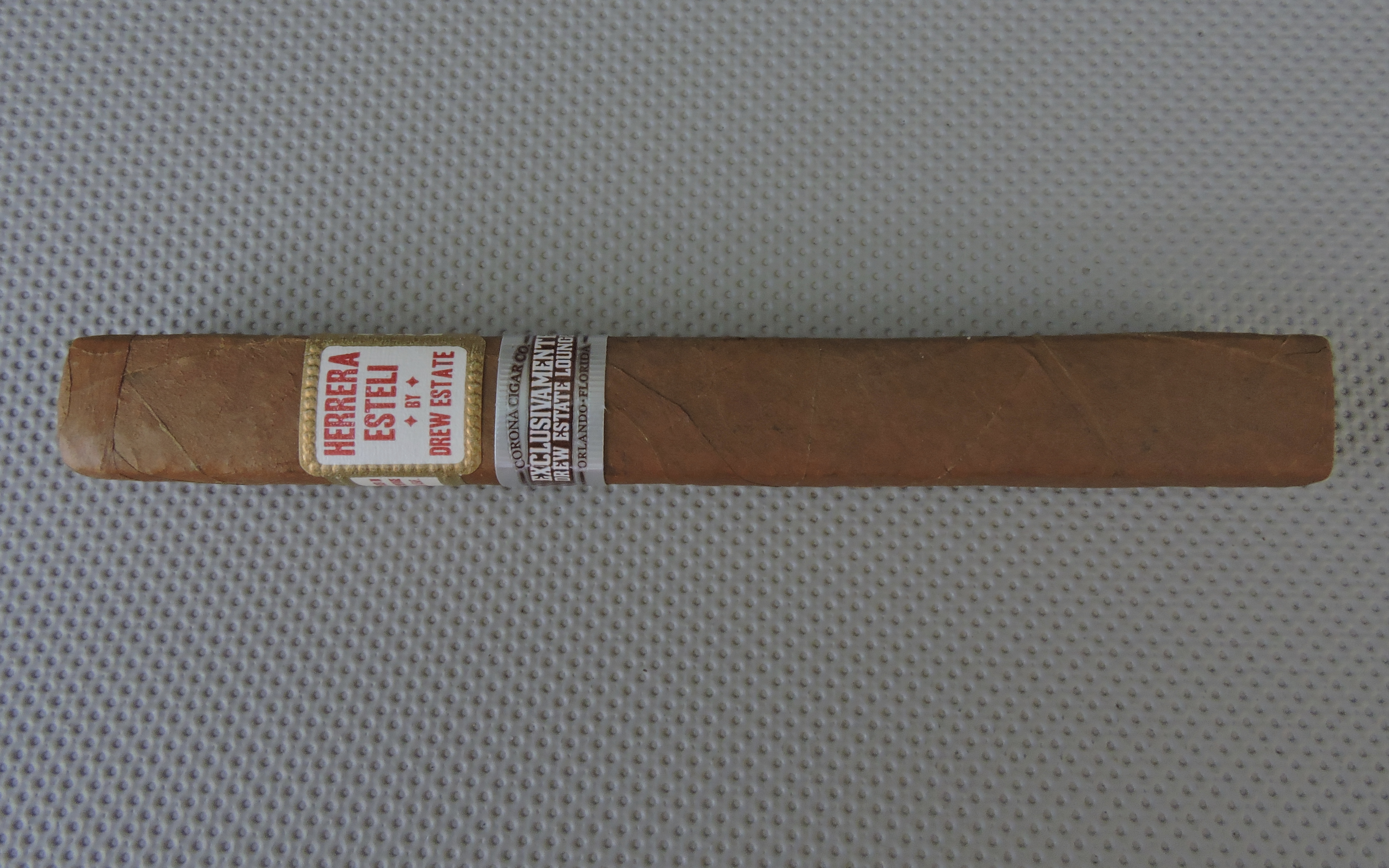 The six cigars in the Corona Cigar Company Exclusivamente are split among Drew Estate’s traditional and infused lines. The traditional offerings (which include the Herrera Esteli) are square-pressed while the infused lines are soft-pressed. 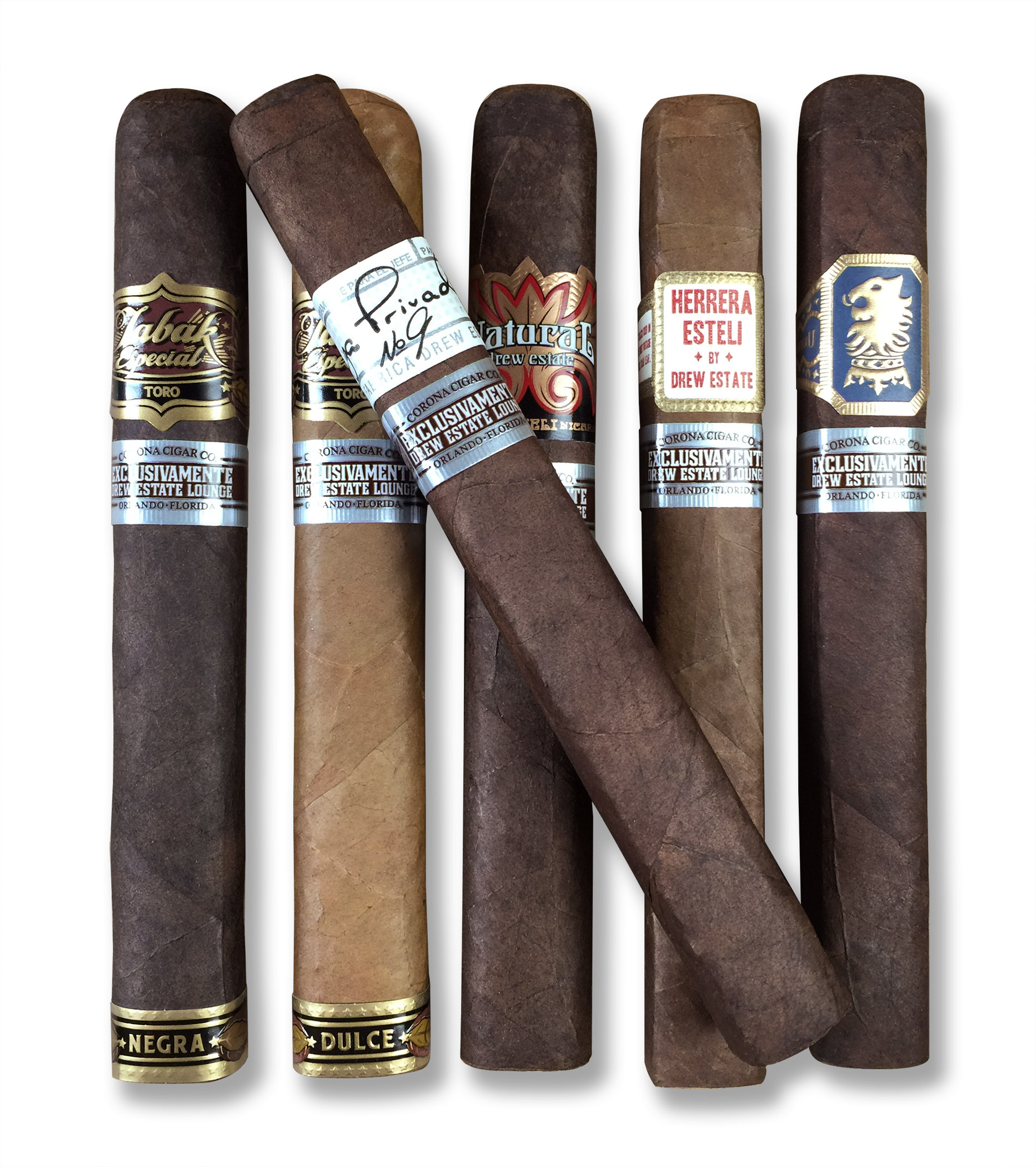 Without further ado, let’s take a closer look at the Drew Estate Herrera Esteli Box Pressed Toro and see what this cigar brings to the table.

Including the Corona Cigar Shop Exclusivamente and the limited edition lancero released in 2014, the total number of vitolas in the Herrera Esteli line is now eight.

The Ecuadorian Habano wrapper has a light brown color. Consistent with the other Herrera Esteli vitolas, it looks a shade darker than an Ecuadorian Connecticut Shade wrapper. There is some oil on the surface of the wrapper. It is a smooth, square-pressed cigar with some visible veins as well as some thin visible wrapper seams. This is a thin, delicate wrapper, and this should be noted when lighting this cigar.

There are two bands on the Herrera Esteli Box Pressed Toro. The primary band is the same one that is shared across the rest of the Herrera Esteli line. This band has red lettering on a background with some gold trim. On the center of the band is the text “HERRERA ESTELI by DREW ESTATE”.  To the left is the text (in smaller font), “WE WARRANTEE THE TOBACCO USED IN HERRERA ESTELI ARE THE FINEST VINTAGE AGED AIR CURED BLACK CIGAR LEAF”.  To the right is the text “HANDMADE BY LA GRAN FABRICA DREW ESTATE S.A. FRENTE A LAS ALDEAS SOS BARRIO OSCAR GAMEZ” (which translates to the address of Drew Estate in Nicaragua).

Prior to lighting up the Herrera Esteli Box Pressed Toro, I placed a very thin cut into the cap of the cigar. Given this was a delicate wrapper, I wanted to be careful not to crack it. The thin cut worked perfect and I got a nice clean cut. I then moved on to the pre-light draw. The cold draw provided a mix of cream, cedar, and natural tobacco. Overall I considered this to be an excellent pre-light draw. At this point I was ready to light up the Herrera Esteli Box Pressed Toro and see what the smoking experience would have in store.

During the first third of the Herrera Esteli Box Pressed Toro, a vanilla note surfaced early and joined the cream notes in the forefront. Meanwhile the cedar, pepper, and natural tobacco notes were secondary. The cedar notes did move closer to the forefront throughout this stage of the smoking experience.

By the second third, the cedar notes joined the vanilla and cream notes in the forefront. The pepper and natural tobacco flavors remained in the background.

By the last third of the Herrera Esteli Box Pressed Toro, the cream notes diminished into the background joining the cedar notes in the background. There was a slight increase in the pepper, but it never became overwhelming. This is the way the cigar experience came to a close.  The resulting nub was slightly soft to the touch, but cool in temperature.

The Herrera Esteli Box Pressed Toro maintained a straight burn path from start to finish. Along the way, there was a slight jaggedness on the burn line, but this was easily remedied with some touch-ups. Because the wrapper was thin, I was quite gentle when touching the cigar up. The amount of touch-ups needed was not excessive. The cigar produced a firm ash and was not prone to flaking. The ash itself had a light gray color to it. 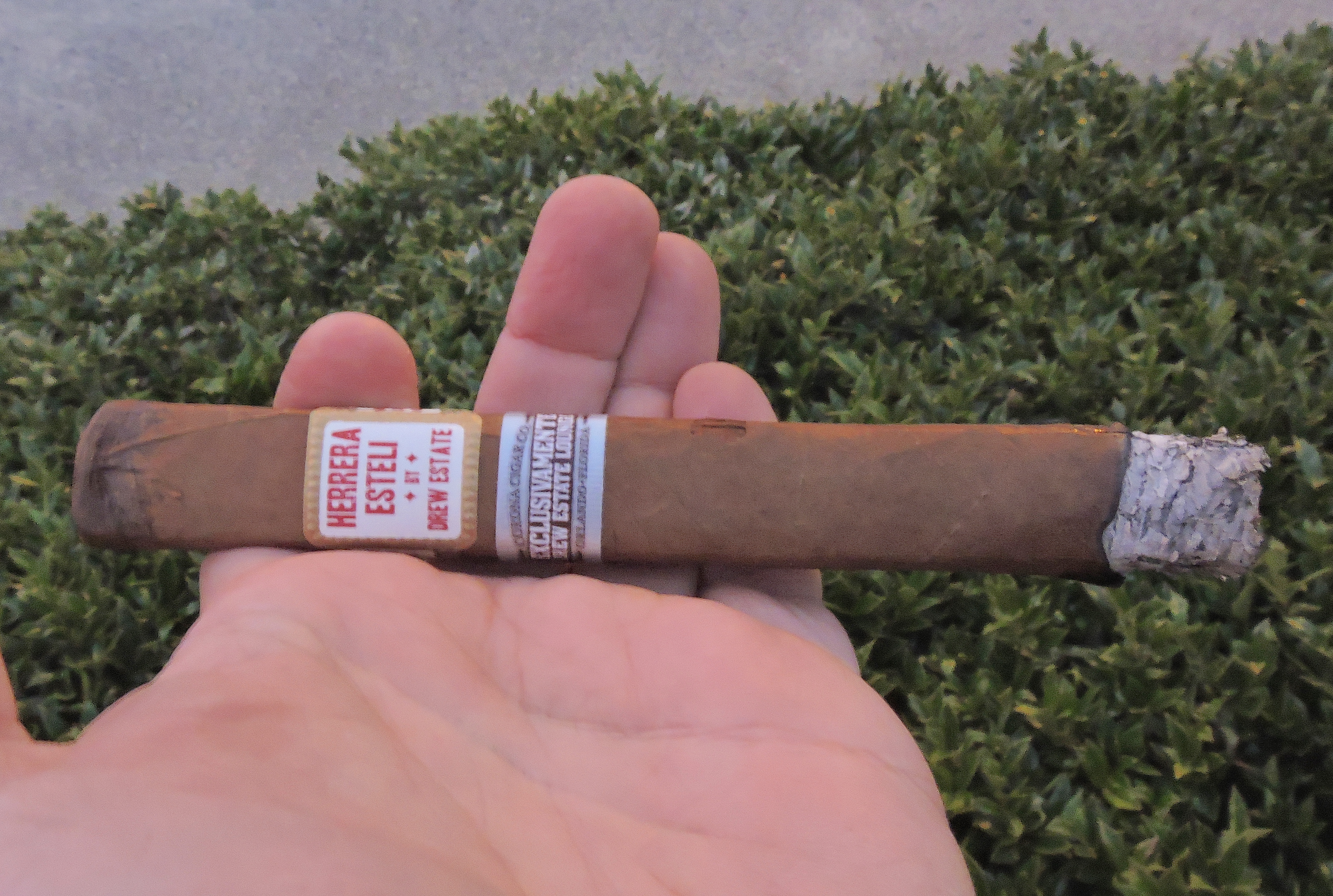 The draw to the Herrera Esteli Box Pressed Toro was open, but not loose. Sometimes I have had issues with square-shaped box-press cigars. The open draw had no adverse effects on the combustion as it maintained an ideal burn rate and ideal burn temperature.

With the Herrera Esteli Box Pressed Toro, I found this to be slightly bolder than the rest of the vitolas I have smoked in the line. From a strength perspective, this cigar started out medium. By the last third, I had found the strength had crossed into medium to full territory – which did surprise me.

The early stages of the Herrera Esteli Box Pressed Toro were medium-bodied, but early in the first third, the cigar progressed to medium to full-bodied. The body increased slowly and toward the very end of the cigar experience, the flavors from the cigar had just enough depth to be close this cigar out as full-bodied. In terms of strength versus body, I gave the edge to the body.

I’ve mentioned before that 2015 will be long remembered as the year of shop exclusive cigars. I also mentioned that more of the shop exclusives that have been released have been misses as opposed to hits. There was no such problem with the Herrera Esteli Box Pressed Toro. While I still prefer the lonsdale size of this line, the Herrera Esteli Box Pressed Toro is an excellent cigar. It remains true to the Herrera Esteli’s Cubanesque profile, yet offers a slightly bolder cigar. I also liked how bolder didn’t mean spicier here.

There were a couple of points where I mentioned the delicate wrapper of the Herrera Estateli Box Pressed Toro. This was a cigar I did find needed a little more tlc, but I didn’t find it to be excessive, nor did it negatively impact the cigar experience.

The Herrera Esteli Box Pressed Toro is a cigar I would recommend to an experienced cigar enthusiast, and it is one I wouldn’t discourage a novice from trying. As for myself, this is a cigar I would smoke again – and it’s one certainly worthy of a box purchase.