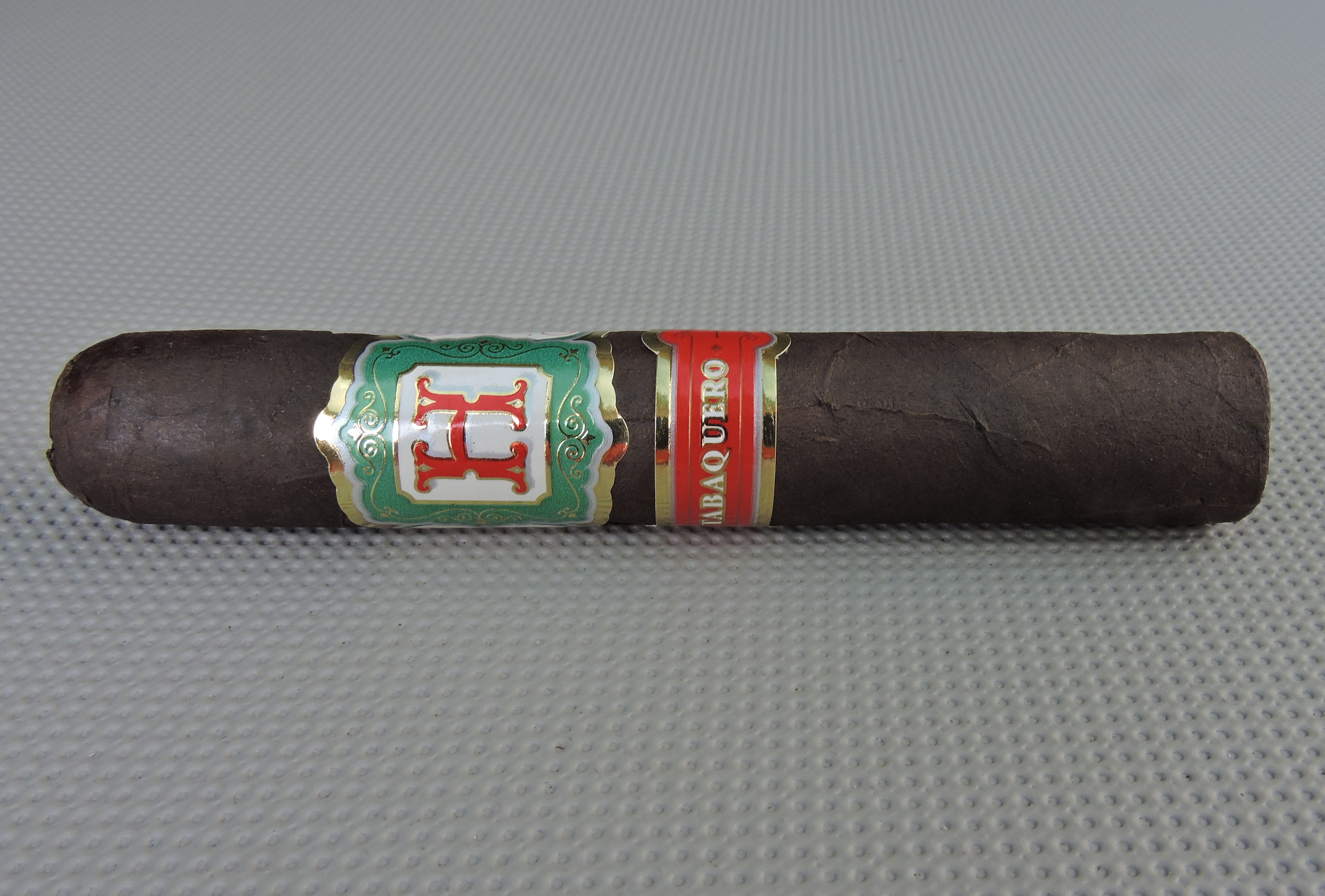 The Tabaquero was actually a cigar that was originally blended by Paredes in Naples, Florida, home of Rocky Patel Premium Cigars headquarters and the the Rocky Patel Burn Lounge. The cigar itself is produced at Rocky Patel’s Tavicusa factory in Esteli, Nicaragua. According to an article by Cigar Aficionado because Paredes’ Visa did not allow him to go to Nicaragua, so is he not involved in the production of the cigar at this time.

In case one was wondering, the name “tabaquero” is Spanish for “tobacconist”.

Without further ado, let’s break down the Tabaquero by Hamlet Paredes and see what this cigar brings to the table.

The blend to the Tabaquero consists of tobaccos from four countries including a San Andres wrapper as well as a double binder.

The Tabaquero has been launched in five sizes. The cigars are packaged in 20 count boxes with the exception of the salomon which is packaged in ten count boxes.

There is also a massive 3 foot culebra that was first seen at the 2015 IPCPR Trade Show. This is not a regular production cigar. It is a cigar rolled by Paredes during events. The cigar is typically used as a raffle giveaway. 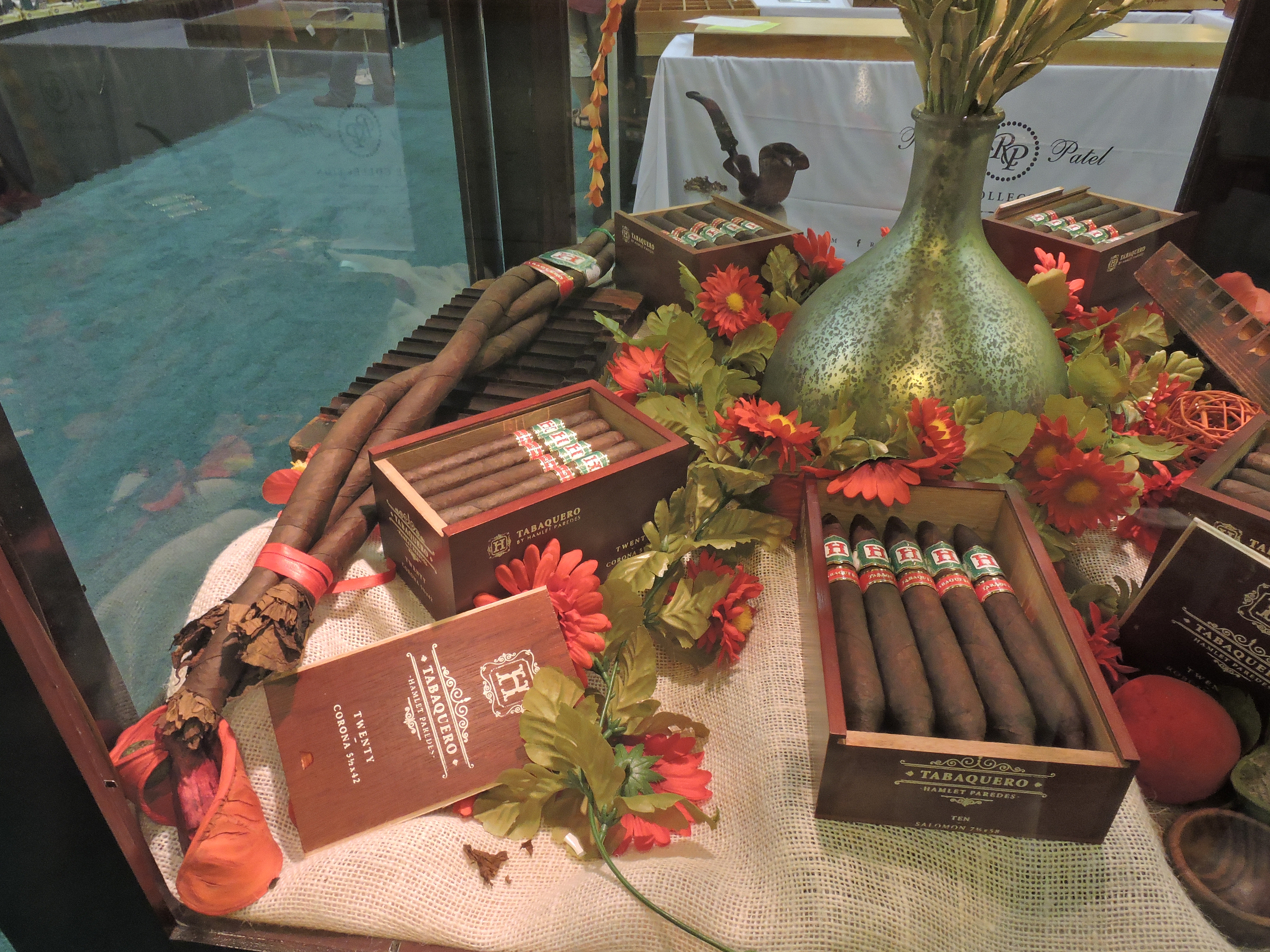 The San Andres wrapper of the Tabaquero Robusto has a dark mocha color to it. I wouldn’t categorize this as an oily wrapper. The dark color of the wrapper does a good job at hiding the wrapper seams. There are also some thin visible veins on the surface the wrapper.

There are two bands on the Tabaquero by Hamlet Paredes. Both bands do not carry the Patel name on it. The front of the band has shield shape to it. On the middle of the band is a large red “H” sitting on a white square field. There is a green shield-shaped frame with gold trim surrounding the white square. Both the left and right side of the band have cloud-like design with red adornments and gold and green trim. On the left cloud is the text “HAMLET PAREDES” in red font. The right cloud has the text ‘MASTER OF TOBACCO” – also in red font. A smaller version of the shield design on the front of the band is on the far right.

The second band to the Tabaquero by Hamet sit just blew the primary band. It is red in color with gold trim. On the center of that band is the text “TABAQUERO”.

Prior to lighting up the Tabaquero Robusto, I went with my usual choice of a straight cut to remove the cap. After removing the cap I moved on to the pre-light draw phase. The dry draw delivered a mix of chocolate and earth notes. I also picked up a slight citric note. Overall I considered this to be a very good pre-light draw. At this point I was ready to light up the Tabaquero Robusto and see what the smoking experience would have in store.

The start of Tabaquero Robusto continued with notes of earth and mocha. The mocha was a combination of chocolate and coffee notes. As the Tabaquero Robusto moved through the early stages notes of wood, cedar, and black pepper surfaced. I also picked up some cedar notes on the retro-hale.

As the Tabaquero Robusto continued to burn through the first third, the mocha notes lost some of the chocolate qualities and became more of a roasted coffee note. I found the earth notes floated between the forefront and background. The wood, pepper, and cedar remained in the background. Meanwhile the black pepper notes now became more prominent on the retrohale.

During the second third, the mocha notes had transitioned to a coffee note. The earth notes continued to move in and out of the forefront. While the cedar notes remained in the background, I no longer got the generic wood component. As the Tabaquero moved toward the midway point, I detected a subtle dried fruit note that provided a little extra sweetness.

Later in the second third, the pepper and cedar notes began to increase. By the last third, these notes were on par with the coffee and earth notes. By this time the fruit sweetness had dissipated. This is the way the flavor profile held until the end. The resulting was firm to the touch and cool in temperature.

From a  burn perspective, the Tabaquero Robusto performed quite well. There was a slight amount of jaggedness on the burn line, but the cigar itself maintained a straight burn path from start to finish. While the Tabaquero Robusto required some touch-ups, I also did not find the amount needed to be excessive. The resulting ash was a silver gray color. The ash itself was firm and came off the cigar in nice clean chunks. As for the combustion, I found this cigar maintained an ideal burn rate and ideal burn temperature. 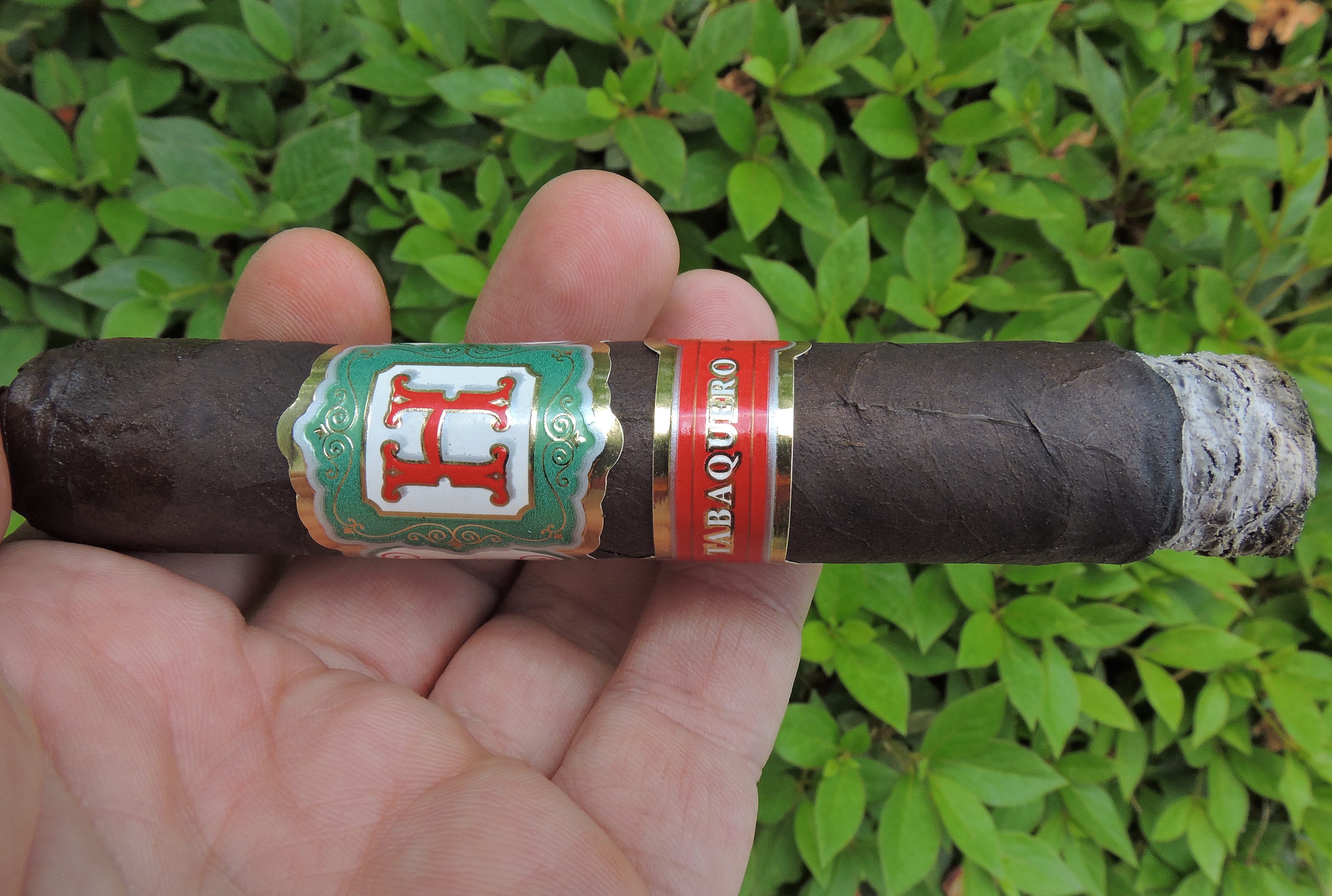 Burn of the Tabaquero by Hamlet Paredes Robusto

As for the draw, I found it to have a touch of resistance – and this is something I consider ideal. This made for an enjoyable smoking experience from start to finish.

Looking back at 2015, it might have been one of the best years for Rocky Patel Premium Cigars. The Twentieth Anniversary, Sun Grown Maduro, and now the Tabaquero by Hamlet Paredes have all been excellent release. With the case of the Tabaquero Robusto, it’s a cigar that held my attention from start to finish. I had smoked the Tabaquero by Hamlet shortly after it was released – and I found it enjoyable then. Now with six months of age, this is becoming a better cigar. The best part is I think there is even more aging potential for this cigar ahead. This is a cigar I would recommend to an experienced cigar enthusiast. It’s also a nice cigar for a novice looking to graduate to something in the medium / medium plus range. As for myself, this is a cigar I’d smoke again – and it’s worthy of a box split.