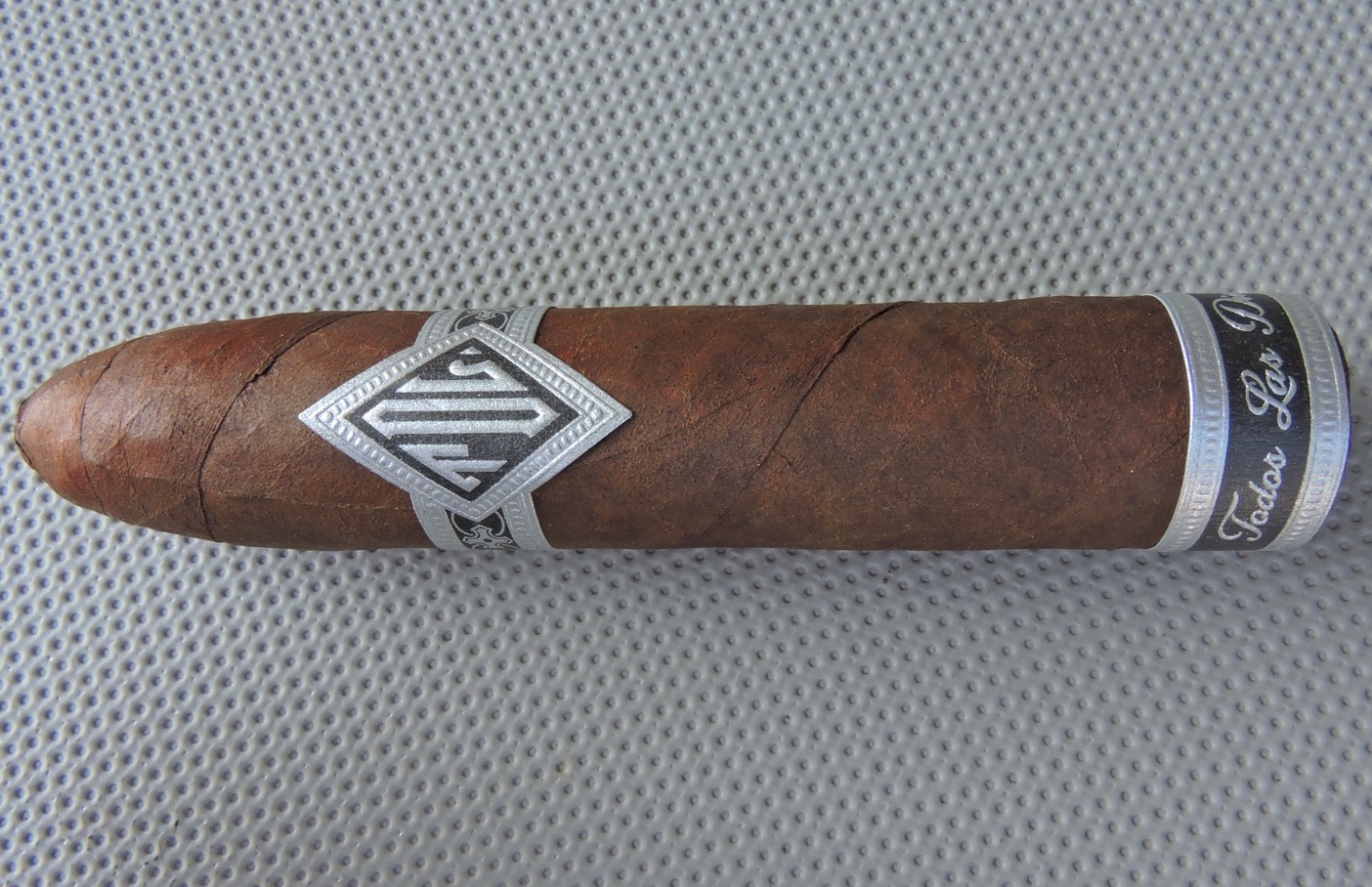 Todos Las Dias was the fifth line by Steve Saka’s Dunbarton Tobacco and Trust to be put into widespread distribution. It was a line that had a soft launch at the 2016 IPCPR Trade Show. At the 2017 IPCPR Trade Show, it would be Dunbarton Tobacco and Trust’s signature release. Todos Las Dias adds a Nicaraguan puro to the company’s portfolio. It has also been positioned as Dunbarton Tobacco and Trust’s boldest release to date. Going into the 2017 IPCPR Trade Show, my feeling was this would be one of the hottest cigars at the trade show. Coming out of the Trade Show, I felt it might have just been “the cigar” at the 2017 IPCPR. Today we take a closer look at the Todos Las Dias in the Double Wide Belicoso (a 4 3/4 x 60 Belicoso) size. Overall I not only have found this to live up to expectations, but it’s a cigar that continues to get better with time.

Just prior to the 2017 IPCPR Trade Show, Saka gave some context around the Todos Las Dias release:

Saka also told how the Todos Las Dias name came about. The name traces back to 2001 when Estello Padron, late brother of Jose Padron of Padron Cigars fame, gave him a very strong cigar.

“The nicotine in it was blowing me away even though at this point I was a very seasoned cigar smoker. In hindsight, I think he gave me the cigar as a bit of a joke, knowing it was likely I would nearly choke on it… Anyhow, I asked, ‘You really smoke these?!?!?!’ To which he replied, “Todos los dias Saka, todos los dias.” This translates to ‘Every day Saka, every day.’ ….So I always wanted to name a super strong cigar “Todos Las Dias.” What? Wait… you said he said “Todos Los Dias!” Yes, he did, but for nearly 15 years I thought he said LAS not LOS. Anyone that knows me is aware of how shamefully pathetic my Spanish is, particularly given how much time I have spent working in Latin America…. Anyhow, I have been saying “Todos Las Dias” for years and no one has ever corrected me. So the name of the product is self-deprecating as it acknowledges my poor Spanish.”

Without further ado, let’s take a closer look at the Todos Las Dias Double Wide Belicoso and see what this cigar brings to the table. 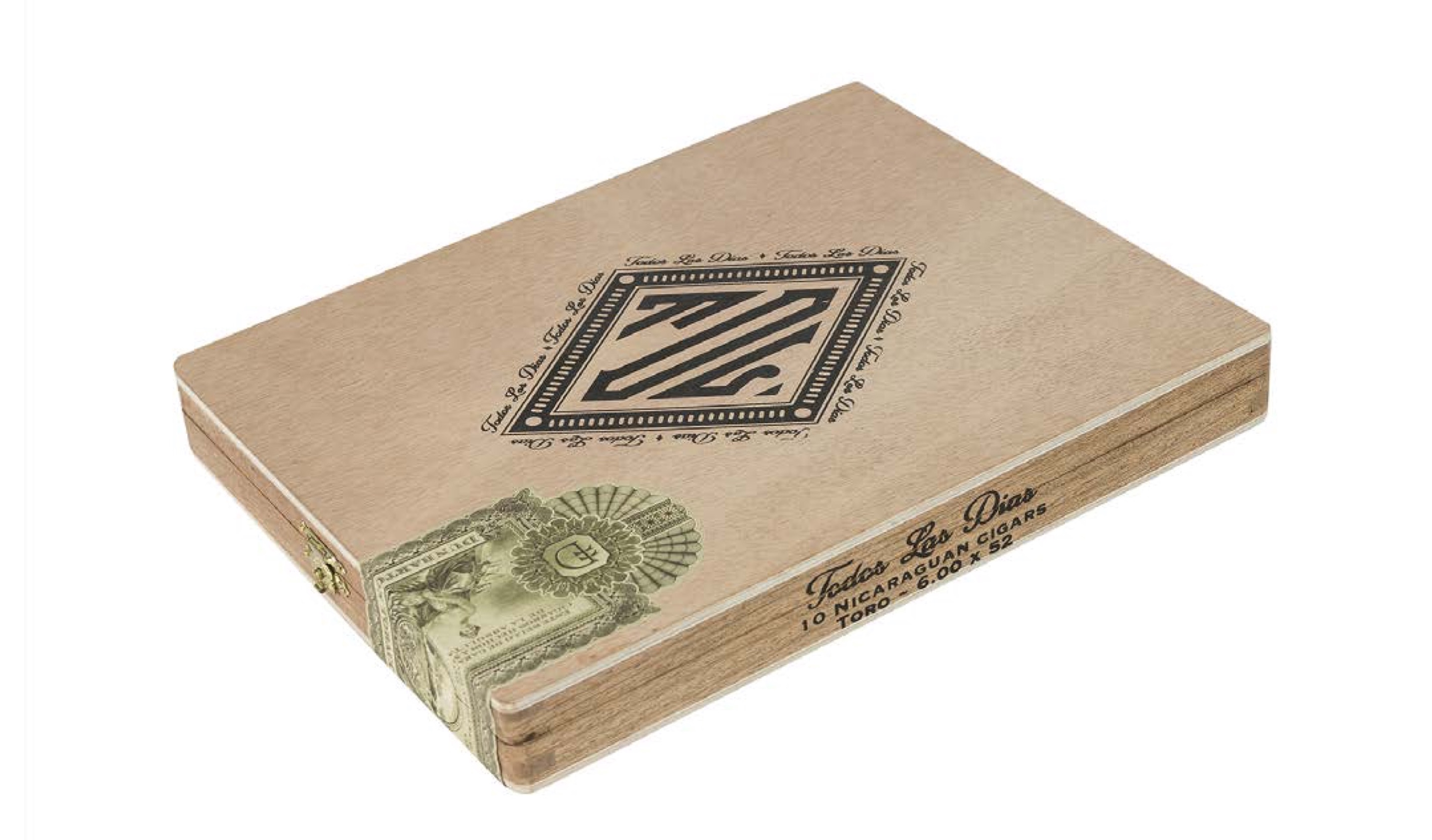 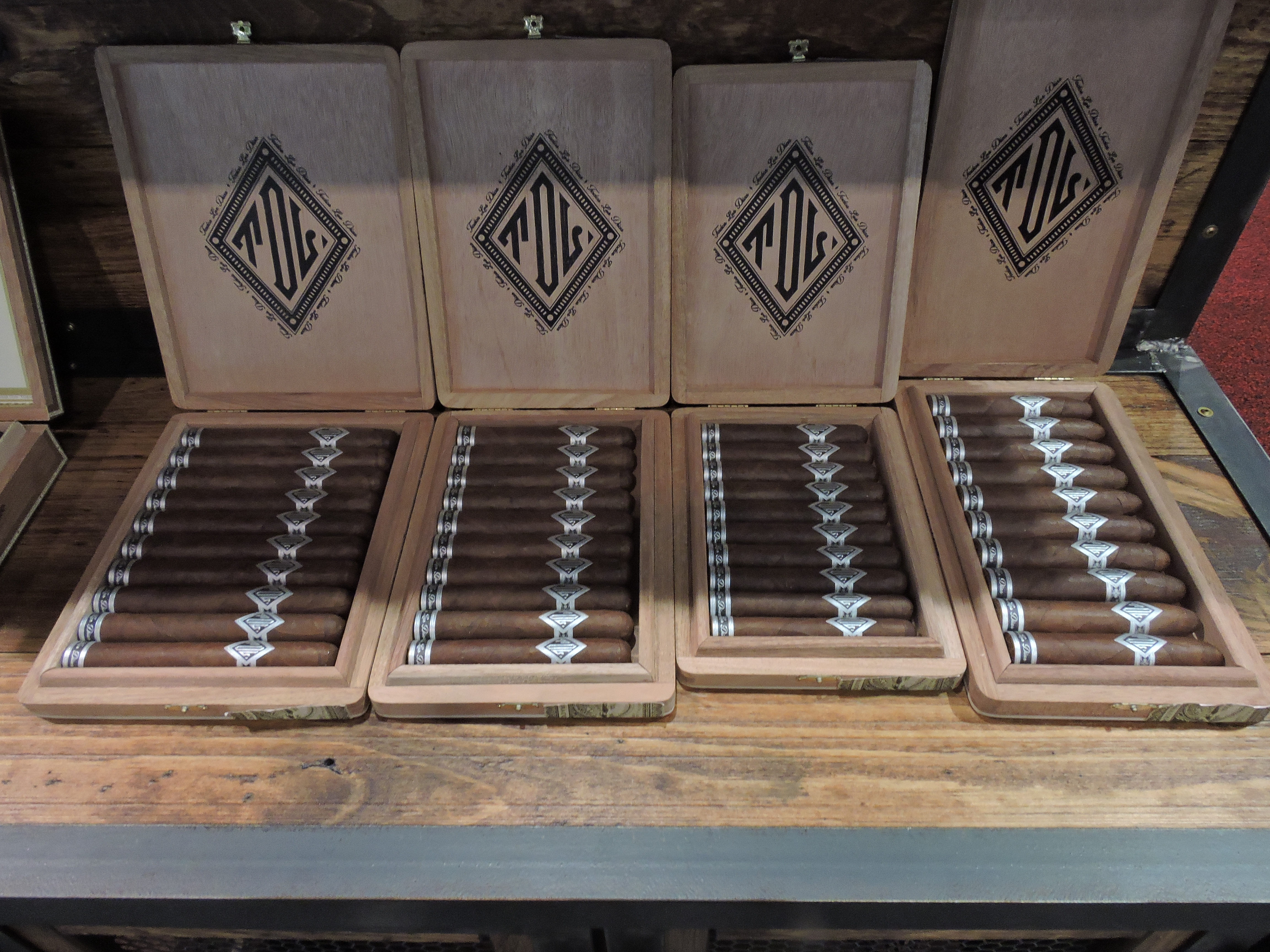 Todos Las Dias has the following four vitolas in widespread distribution. Each size is available in ten-count boxes. 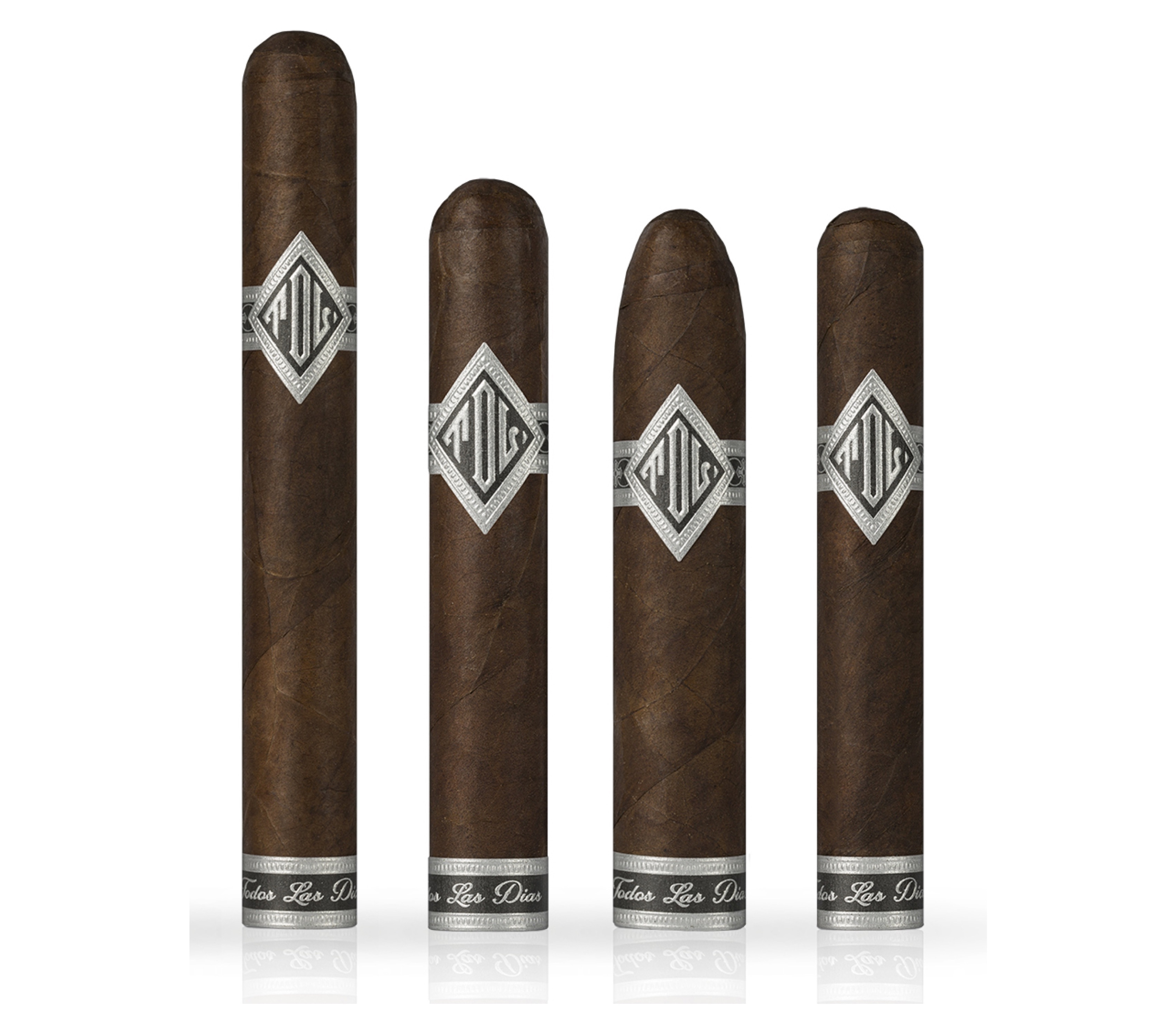 The Nicaraguan wrapper on the Todos Las Dias Double Wide Belicoso had a medium to dark brown color with a rich Colorado tint to it. The wrapper had a light coating of oil on it. This was a smooth wrapper with some thin visible veins and thin visible wrapper seams. The belicoso has a gentle taper with a slightly flat tip.

There are two bands on the Todos Las Dias. Both bands have a black and silver color scheme. The primary band features a diamond shape with a black background and silver trim. On the diamond are the letters “TDL” in silver on it (with the D larger than the other two letters). The remainder of the band has black and silver adornments on it.

The secondary band sits on the footer and has the text “Todos Las Dias” in silver cursive font on a black background. The top and bottom of the band features silver trim.

As I do with all figurado cigars, I used a straight cut to remove the tip of the Todos Las Dias Double Wide Belicoso. I used my Credo Special T cutter with the 36 ring gauge hole to get an ideal cut of the figurado. This allows me to get a smaller ring gauge cut and to take advantage of the tapering of this cigar. I then proceeded with the pre-light draw. The cold draw yielded sweet natural tobacco, wood, and a slight tingly spice. Overall I considered the pre-light draw of this cigar to be satisfactory. At this point, I was ready to light up the Todos Las Dias Double Wide Belicoso and see what the smoking phase would have in store.

During the second third, some cocoa powder notes surfaced with the earth notes in the forefront. Throughout this stage of the smoking experience, the natural tobacco notes moved into the background. During this stage, some of the maple qualities mixed in with the natural tobacco diminished. The chili pepper notes slightly increased on the tongue. In particular, there was a little more hit from the chili pepper notes on the after-draw.

The final third saw the Todos Las Dias Double Wide Belicoso have more of an earthy profile with the cocoa notes dissipating. The chili pepper was a close secondary note, but never smothered the other flavors hitting the tongue. I also still got some natural tobacco and subtle woody notes toward the end. This is the way the flavor profile of the Todos Las Dias Double Wide Belicoso came to a close. The resulting nub was cool and slightly firm to the touch.

The Todos Las Dias Double Wide Belicoso burned like a champ. It maintained a straight burn path and a relatively straight burn line. The ash had a salt and pepper color to it. This was a firm ash that came off the cigar in clean chunks. Meanwhile, the burn rate and burn temperature were ideal. 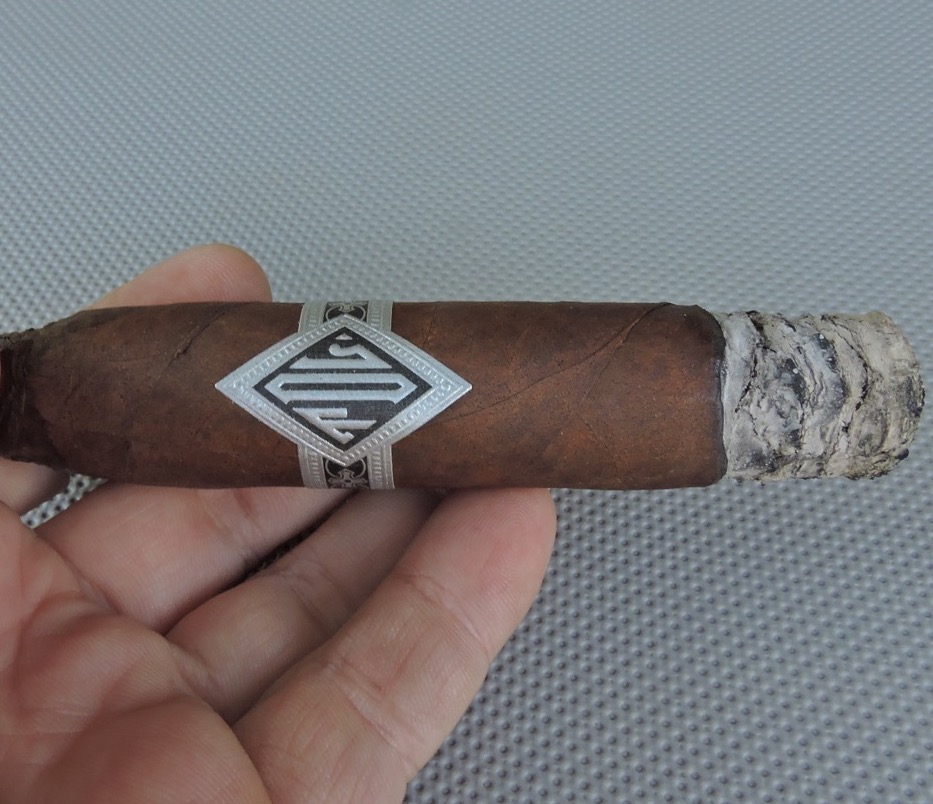 The draw performed extremely well on the Todos Las Dias Double Wide Belicoso. I liked this particular size and shape of Todos Las Dias for two reasons:  First it allowed me to smoke the cigar as if I was smoking something of  a smaller ring diameter than a 60; Second, the tapering was shorter, and this allowed me to maximize the smoking time. I found this draw to be ideal – not too loose, nor too tight. There was a decent amount of smoke production from this cigar as well.

This cigar is positioned as the boldest offering by Dunbarton Tobacco and Trust – and I’ll agree with this assessment. I found this cigar to start out on the upper end of medium to full for both strength and body. By the midway point, both attributes reached the full level. The intensity of each of these attributes continues to ramp up even in the second half.

I gave the strength a slight edge over the body with this cigar. In particular, this is a cigar where the strength is really going to catch up on you – especially in the second half.

There are two things that stand out on with the Todos Las Dias Double Wide Belicoso. The first is the boldness that this cigar delivers from its strength and body. The second is the uniqueness demonstrated from the flavor profile of this cigar. In fact, the flavors were so unique, it was tricky at times to come up with flavor analogies.  On top of that, I really like how this blend worked in the 4 3/4 x 60 figurado format.  I’ve smoked many of these cigars over the past month and in the short amount of time, I’m already seeing this cigar respond quite well to age and I still think there is more potential ahead.

Given the boldness of the Todos Las Dias Double Wide Belicoso, it’s a cigar I would recommend to a more seasoned cigar enthusiast. As for myself, this is a cigar I’d smoke again. It’s a cigar worthy of a box purchase.