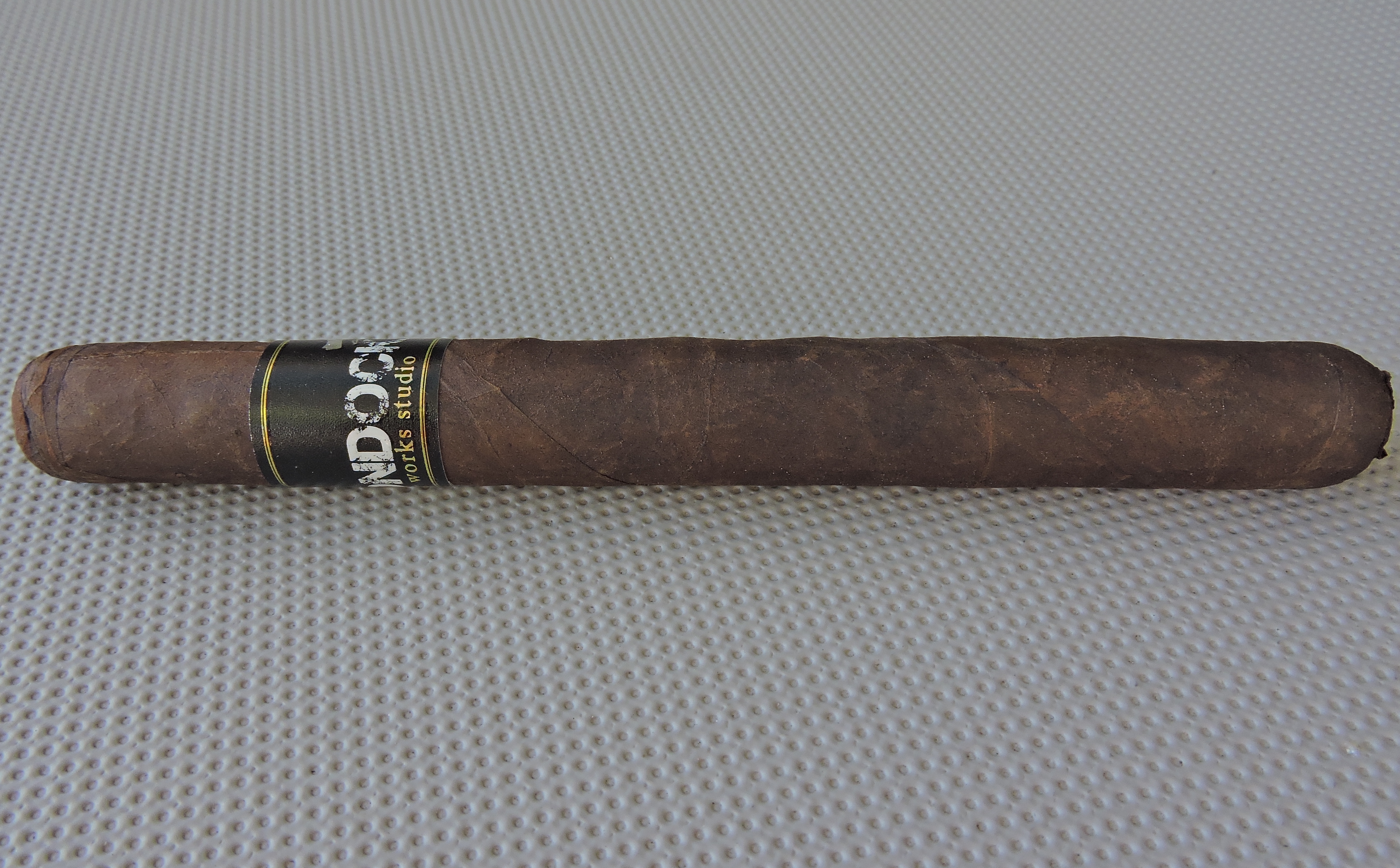 As for the name Boondock Saint, it comes from the title of a movie called “The Boondock Saints” released in 1999. It’s not the first time a movie title has inspired a Black Works Studio blend. Releases such as Green Hornet, Kato, and NBK (Natural Born Killers) were also inspired by movie names.

Without further ado, let’s take a closer look at the Black Works Studio Boondock Saint and see what this cigar brings to the table.

The two sizes of Boondock Saint are packaged in 20-count boxes.

The Pennsylvania Broadleaf wrapper of the Boondock Saint Corona Larga had a dark roasted espresso bean color. Upon closer examination, there was some mottling on the surface. There wasn’t much in the way of oil on the surface. The wrapper had a rugged look with some visible veins. Most of the wrapper seams of the cigar were well hidden. The cigar is finished with a covered footer. 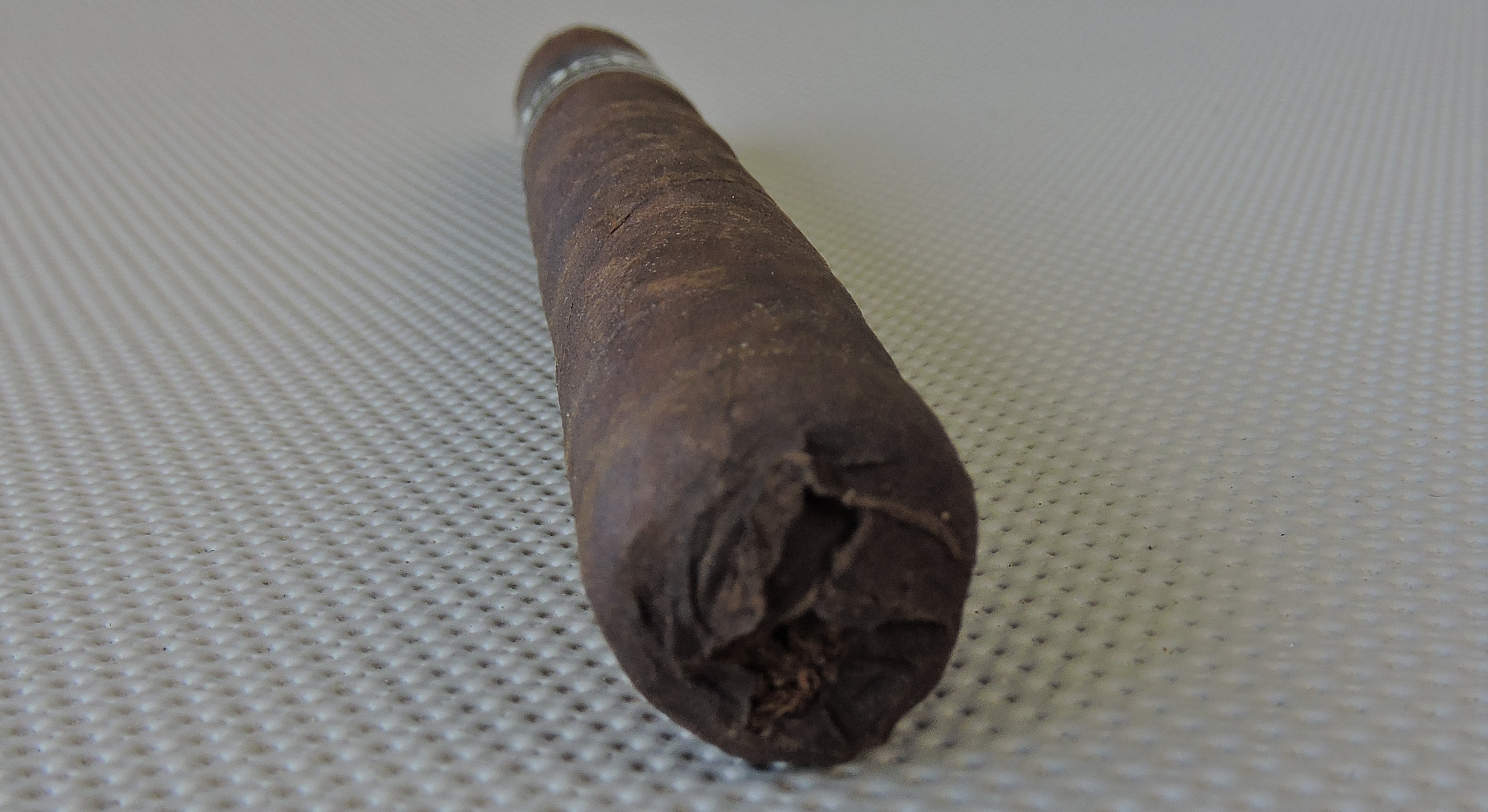 The band to the Black Works Studio Boondock Saint is black with gold pin-striping toward the top and bottom. The text “BOONDOCK” appears in a weathered-style white-colored font. Just to the right of that text in small white font is the text “SAINT” in landscape mode. Just below that text is “black works studio” in gold font. To the right of the text is a gold and white image of a rosary and gun.

I opted for my usual choice of a straight cut to commence the cigar experience of the Boondock Saint Corona Larga. After the cap was removed, I proceeded with the pre-light draw. The dry draw delivered a mix of dark chocolate, coffee, a mineral note, and some cedar. Overall, I considered this to be an excellent pre-light experience. At this point, I was ready to light up my Boondock Saint Corona Larga and see what the smoking phase would have in store.

The start to the Boondock Saint Corona Larga picked up where the pre-light draw left off as I detected more notes of dark chocolate, black coffee, mineral, and cedar. Sometimes when I get both dark chocolate and coffee notes when tasting a cigar, they are fused and I refer to them as “mocha”, however with the Boondock Saint Corona Larga they remained separate and distinct. Early on the dark chocolate notes became primary. I didn’t find these notes to be overly sweet, but I considered that a positive as it maintained the balance of the cigar. The coffee, mineral, and cedar notes were secondary. I also detected white pepper on the retro-hale.

Later in the first third, there was some red pepper that mixed in with the retro-hale. By the start of the second third,  the black coffee notes started to increase. Just past the midway point of the Boondock Saint Corona Larga, the black coffee notes eclipsed the dark chocolate as the primary note. It was also past the midway point while the mineral notes also started to increase and I detected some red pepper on the tongue as well. The retro-hale had now become the prominent spice on the retro-hale.

By the last third, the mineral notes had closed in on the black coffee. The cedar and chocolate notes were still secondary and there was still a touch of red pepper on the tongue. This is the way the smoking experience of the Boondock Saint Corona Larga came to a close. The resulting nub was slightly soft to the touch, but cool in temperature.

The Boondock Saint Corona Larga maintained a straight burn path from start to finish. Early on there was a slight jaggedness on the actual burn line, but this proved to be more cosmetic and didn’t warrant much in the way of extra touch-ups. The resulting ash was light gray with some darker speckling in it. This was an ash that was definitely skewed toward the firmer side. Meanwhile, the burn rate and burn temperature were both ideal. 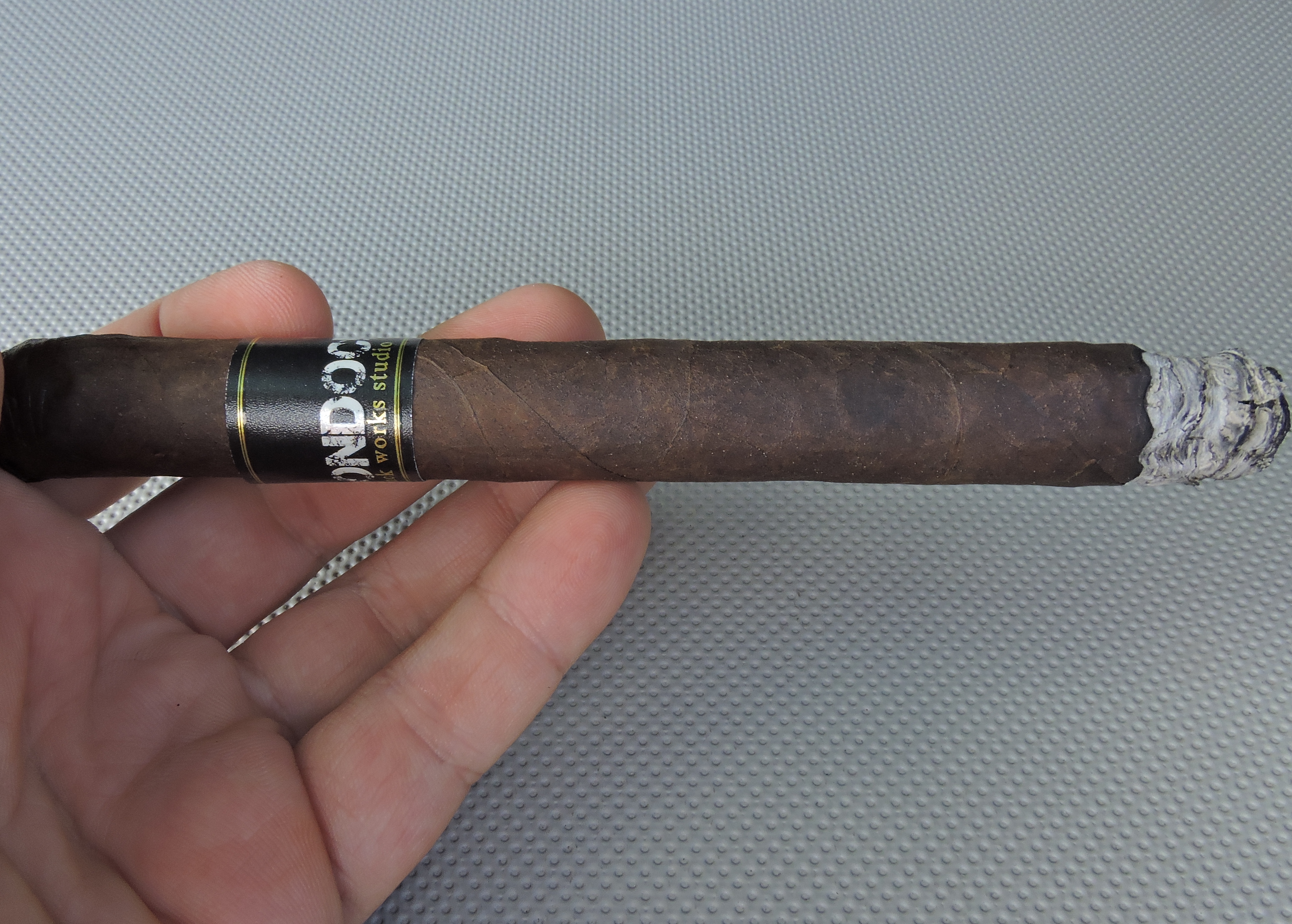 The draw to the Boondock Saint Corona Larga had a touch of resistance to it. This was pretty close to my personal sweet-spot in terms of resistance. This made for a low maintenance cigar to derive flavor from.

When it comes to Pennsylvania Broadleaf cigar tobacco, I find it can often fall into the same category as San Andres Maduro – it has the potential to overpower a blend. When I first looked at the Boondock Saint’s blend, seeing that it had both Pennsylvania Broadleaf for the wrapper and the filler, I was concerned this would be a cigar that would fall into that category. Once I lit it up, I realized that I was wrong. While certainly the mineral notes reminded me of the Pennsylvania Broadleaf, there are plenty of other flavors to keep me interested. This is a cigar that I would recommend to an experienced cigar enthusiast, but I certainly wouldn’t discourage a novice from trying  – especially one who wants something a little bolder. As for myself, this cigar definitely won me over and it earns box purchase consideration.