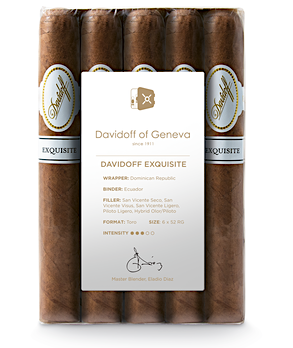 On October 17, 2019, Davidoff will release its latest installment in the Davidoff Vault Series, the Davidoff Exquisite. This is a cigar described as a personal cigar for Davidoff Master Blender Eladio Diaz.

The cigar itself features a Dominican wrapper over an Ecuadorian binder and Dominican filler. it comes in one size – a  6 x 52 Toro. The cigar is sold in ten-count packs priced $330.00 per pack. Like all Davidoff Vault releases, this is a limited small-batch offering.

At a glance, here is a look at the Davidoff Exquisite: