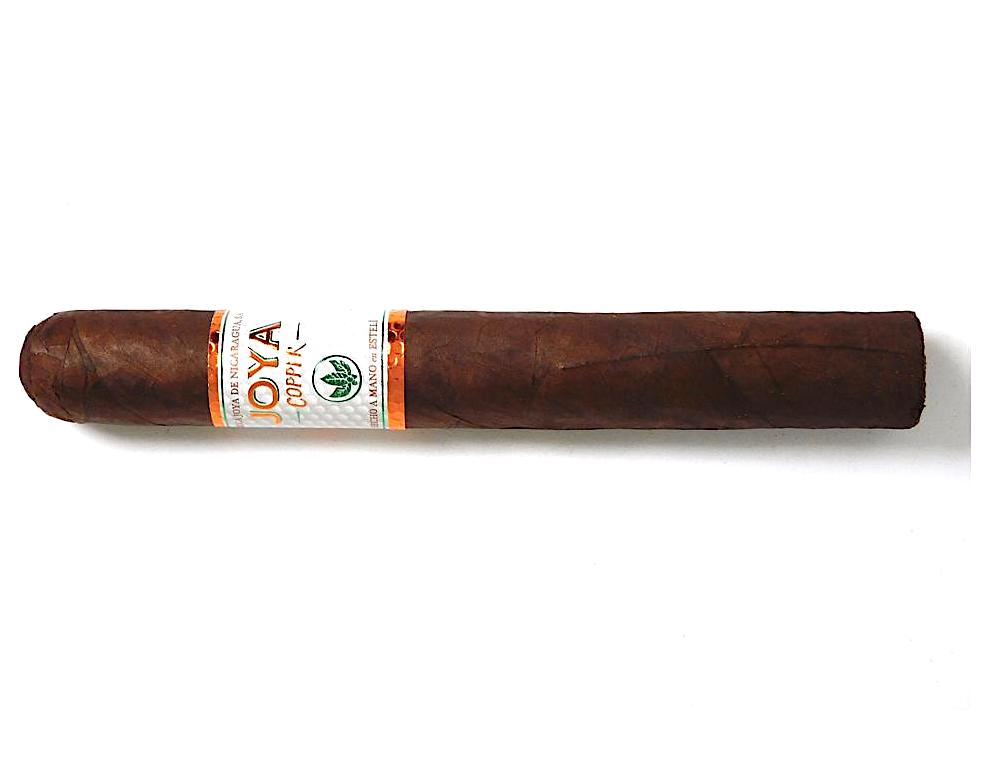 The following are the five releases that make up the Joya series – along with what the distinguishing characteristic is for each of these releases.

Please note: the cigars used for this assessment had about 5 months aging in the Cigar Coop humidor.

Without further ado, let’s break down the Joya Copper Toro by Joya de Nicaragua and see what this cigar brings to the table.

As mentioned above, the Joya Copper is a Nicaraguan puro. It’s made at the Joya de Nicaragua factory in Estelí, Nicaragua.

The Joya Copper is available in four sizes. Each is presented in 20-count boxes. 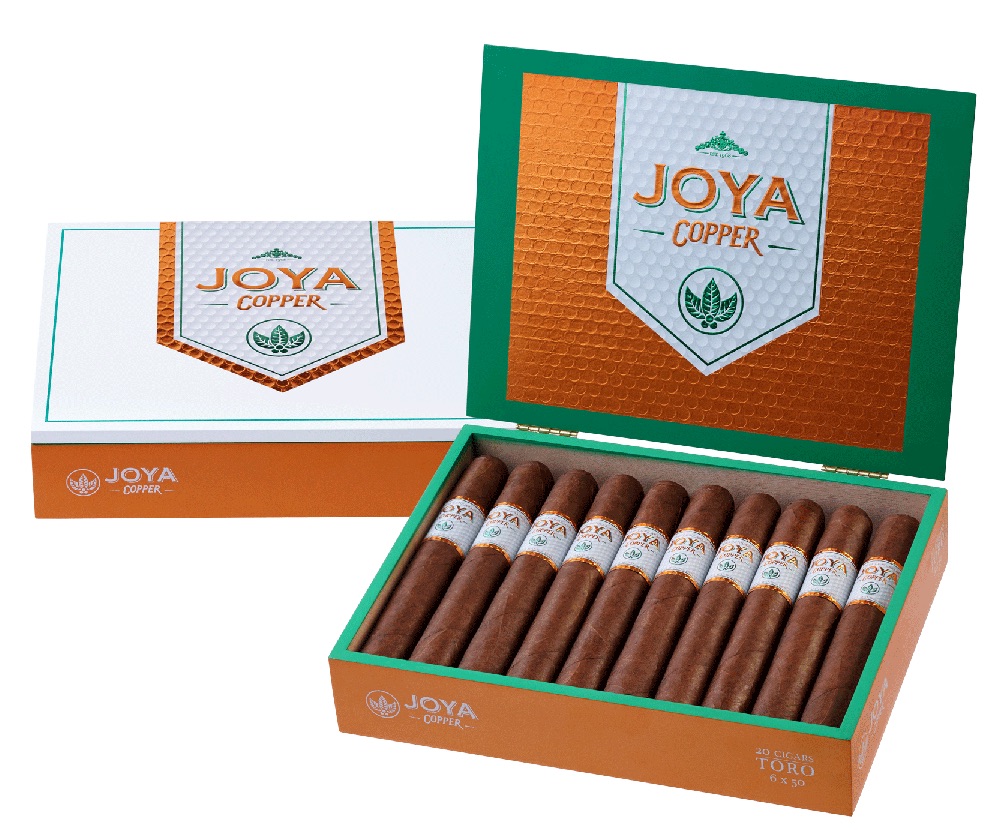 The Nicaraguan wrapper of the Joya Copper Toro had a dark cinnamon color to it. Upon closer examination, there was some subtle mottling. The wrapper itself had a light coating of oil. There were some visible veins and visible wrapper seams, but this still was a relatively smooth wrapper.

The band of Joya Copper uses the design scheme similar to the Joya Silver, but with its own color scheme. The band has a white background with a faux dimple pattern. The band is surrounded by a copper-colored trim. On the white background is the text “JOYA” in large copper text. Just below that is the text “COPPER” in copper font flanked by a short, thin horizontal green-colored stripe on each side. Below that text is a green Joya de Nicaragua leaf logo. Across the top is the text “FABRICA JOYA DE NICARAGUA SA” in small copper font. Toward the bottom is the text “HECHO A MANO en ESTELI” – also in small copper font. On the far right side of the band is a group of red medallions and adornments in landscape mode with the green font text “EST 1968.”

A straight cut was used to remove the cap of the Joya Copper Toro. From that point, it was on to the pre-light draw. The dry draw delivered a mix of cedar, classic wood, and a slight amount of natural tobacco sweetness. Overall this was a satisfactory pre-light draw. At this point, it was time to light up the Joya Copper Toro and see what the smoking phase had in store.

The final third of the Joya Copper Toro saw the earth notes make their way into the forefront, joining the wood notes. The natural tobacco notes receded into the background and helped round out the flavor profile along with the notes of brown sugar, pepper, and lemon. This is the way the Joya Copper came to a close. The resulting nub was slightly soft to the touch but cool in temperature.

While there was an occasional amount of unevenness on the burn, the Joya Copper Toro maintained a relatively straight path from start to finish. The resulting ash was skewed toward the firmer side. This was an ash that had various silver-gray shades to it. As for the burn rate and burn temperature, both were ideal. 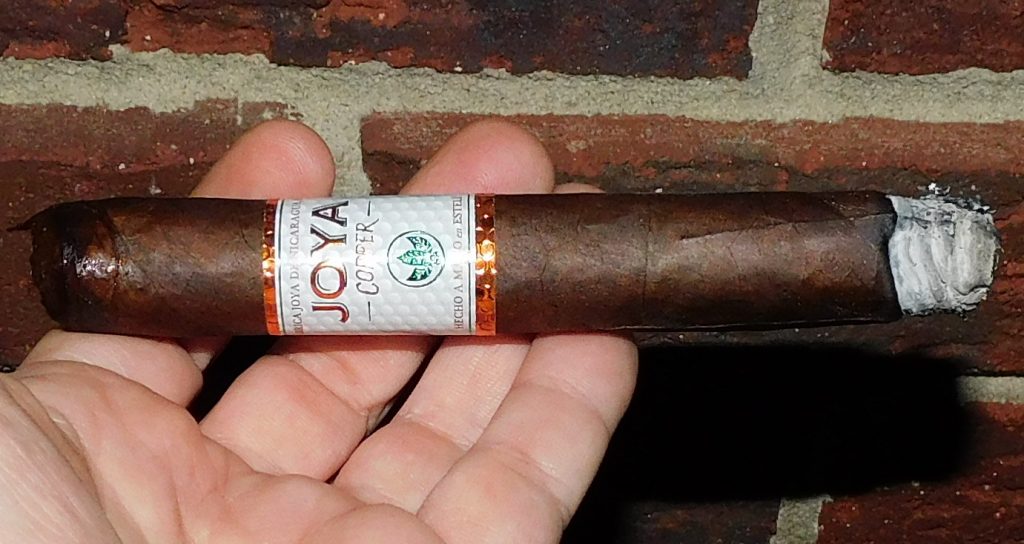 Burn of the Joya Copper Toro

The draw to the Joya Copper Toro had a touch of resistance to it. This is something that is a personal preference of mine on a draw. Concurrently, this was a cigar that was low maintenance to derive flavor from.

In terms of strength and body, the Joya Copper is on the bolder side. While I found the Robusto size to be a little bolder than the Toro, the Toro size still has it share of firepower. This is a cigar that started out medium to full in both strength and body. There was an increase in the second half, but the intensity levels didn’t quite make it to the full range. Overall, the strength and body managed each other nicely with neither attribute overshadowing the other.

Since Joya de Nicaragua launched the Joya series in 2014 with Joya Red, I have been quite impressed with the releases. The Joya Copper is another winner. The Joya Copper Toro delivers nice flavors and there is a good amount of complexity present with this cigar.  The boldness of this cigar reflects Nicaragua quite nicely. Over the past few years, there have been many single store releases that have flooded the market, and I think it has diluted the amount of good single store releases. The Joya Copper Toro is not one of those cigars. It’s an enjoyable cigar at a very good price. This is a cigar I would still steer toward an experienced cigar enthusiast who likes a bolder smoke. As for myself, this is a cigar I would smoke again and pick up multiples for the humidor.