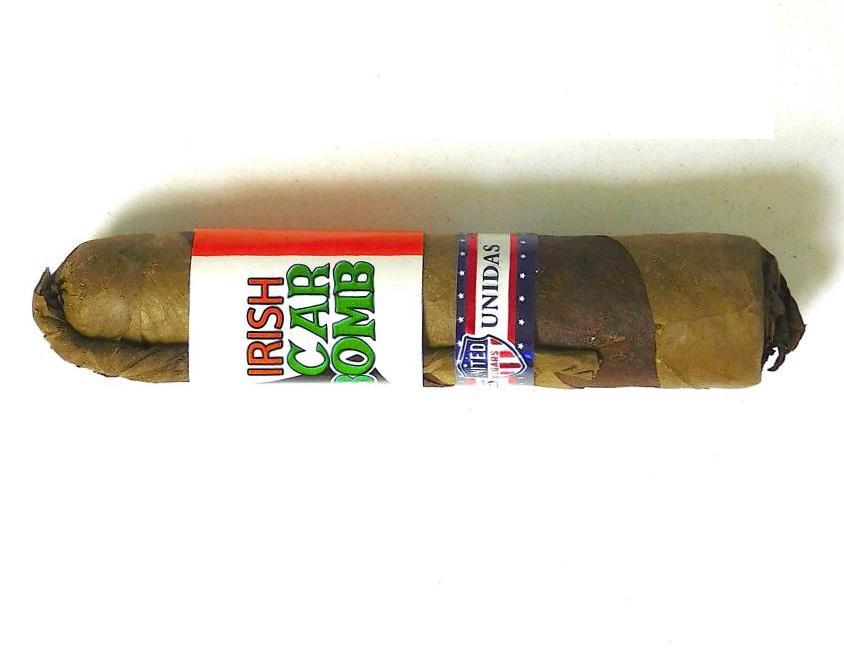 In 2021, United Cigar announced a new release under its Firecracker Series known as the Irish Car Bomb. The cigar is a combination of a candela and a maduro wrapper with the appearance of a firecracker. The Firecracker Series is a line of 3 to 3 1/2 inch sized 50 ring gauge cigars with a long fuse. Back in 2007, it started out as a project by David Garofalo at Two Guys Smoke Shop in collaboration with My Father Cigars resulting in the Don Pepin Garcia Original Firecracker. Since then, Two Guys started partnering with the manufacturers to do a cigar, and more recently the cigars are now being distributed by United Cigar on a nationwide basis as a part of its SERIES UNIDAS (collaboration series). All of the cigars have been limited runs, except for “The Firecracker,” which is made by José Dominguez. Ironically, the Irish Car Bomb also comes from Dominguez, but in this case the Irish Car Bomb is a more limited offering. Today we take a closer look at the Irish Car Bomb Firecracker offering.

The following are the companies that have released a Firecracker:

The barber-pole of the Irish Car Bomb features a Dominican-grown candela wrapper and a San Andres Maduro wrapper. It is the candela wrapper that is draped over the San Andres wrapper. The binder consists of Nicaragua Criollo and the fillers come from the Dominican Republic, Nicaragua, and Pennsylvania. Production is handled out of José Dominguez’s Magia Cubana factory in the Dominican Republic.

The Irish Car Bomb comes in one size – a 3 x 50 (very) short robusto. The cigars are sold in bundled five packs. 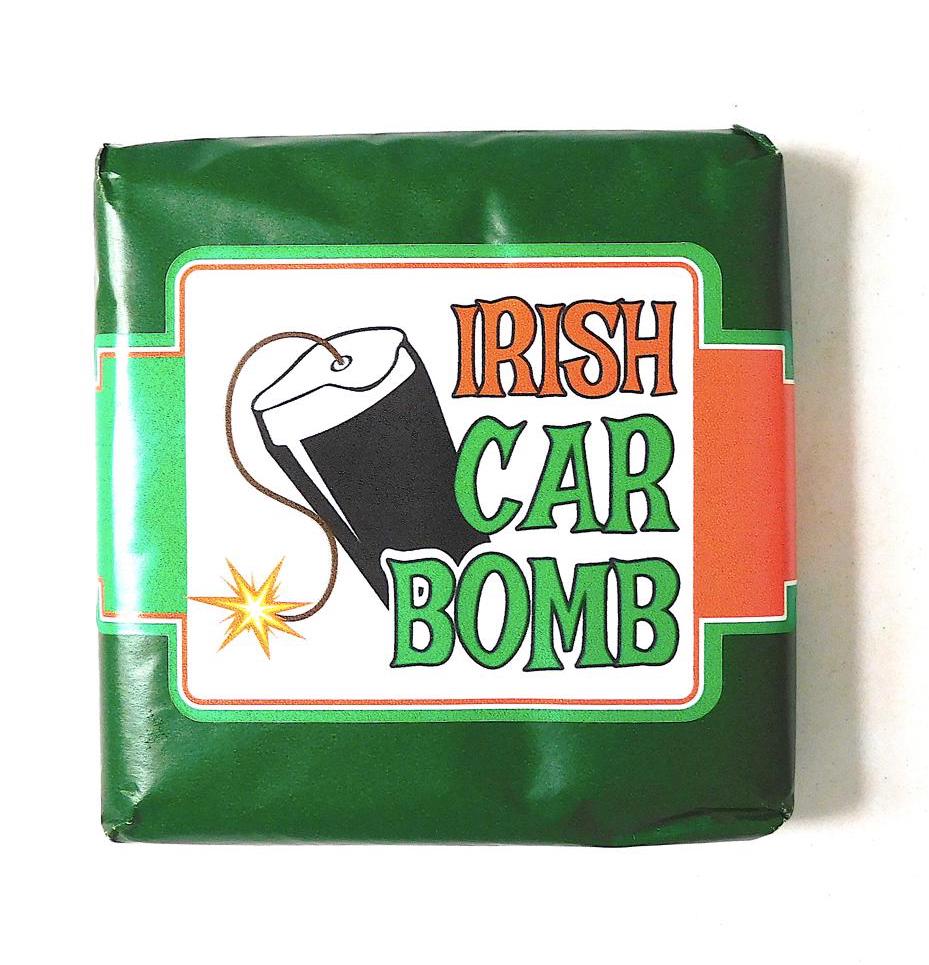 The candela wrapper of the Irish Car Bomb Firecracker has a weathered green look while the San Andres maduro wrapper has a light roasted coffee bean color to it. As mentioned above, the candela wrapper is draped over the San Andres wrapper. There were some thin visible veins on the ones I smoked. A long, thick pig-tail/fuse is draped over the cap and down the side of the cigar. This fuse is tucked under the primary cigar band. The footer of the cigar is covered.

The secondary band had a red, white, and blue color scheme. At the center of the band is the UNITED CIGARS shield. In blue font, the text “SERIES” and “UNIDAS” surrounds the shield on the left and side sitting on a white stripe. The outer blue trim of the band had a row of stars on it.

A straight cut was used to remove the cap of the Irish Car Bomb Firecracker. This also detached the fuse from the cap and allowed for the fuse to be easily pulled from under the primary band. It was then on to the pre-light draw. The cold draw delivered notes of grass, cream, and coffee. I was content with the pre-light draw. At this point, it was time to light up Irish Car Bomb Firecracker and move on to the smoking experience.

The Irish Car Bomb Firecracker kicked off with notes of cream, grass, and citrus along with some notes of white pepper and coffee. The cream and grass notes moved to the forefront early on. The citrus, white pepper, and coffee settled in the background. There was a combination of cedar and pepper on the retro-hale.

On the last third, the coffee notes remained in the forefront. The pepper notes were now more prominent, but still secondary. There were also notes of grass, cream, and citrus that remained in the background. As the Irish Car Bomb Firecracker came to a close, the cigar finished up with a nub that was on the cool and firm side.

The burn of the Irish Car Bomb Firecracker scores excellently. In fact, this is one of the best burning cigars that I can remember from the Firecracker series. The burn maintained a straight burn path and had a straight burn line. The resulting ash had a salt and pepper color to it. This was an ash that was skewed toward the firmer side. As for the burn rate and burn temperature, both were ideal. 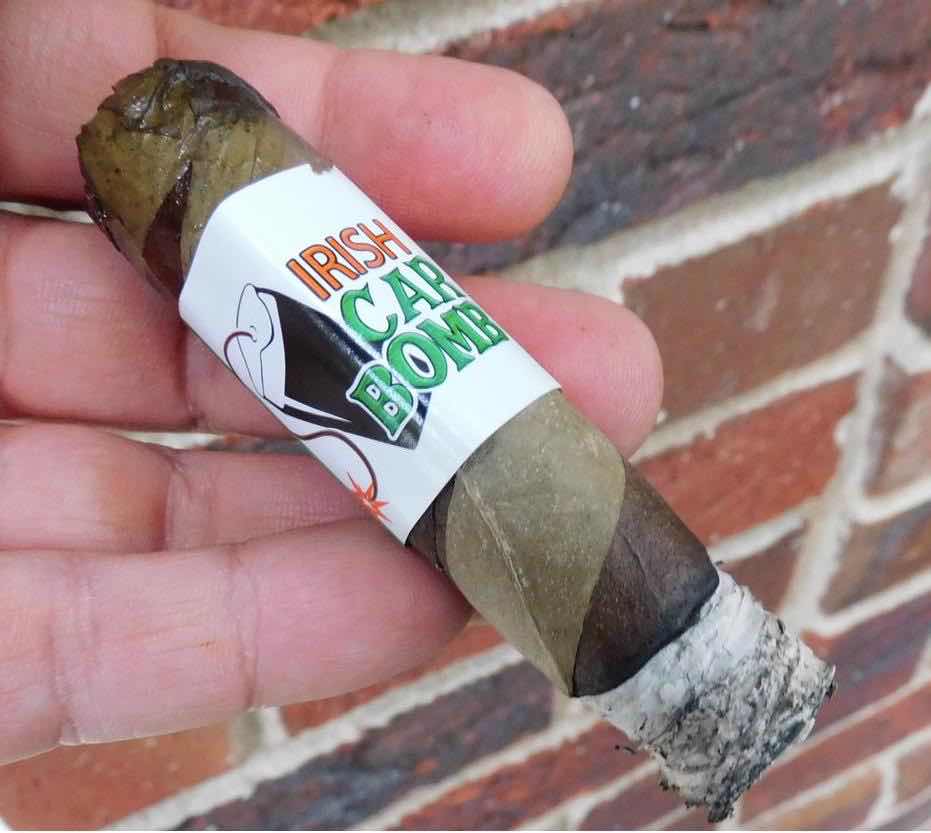 On the other hand, the draw was quite tight on the Irish Car Bomb Firecracker. While normally I like some resistance on the draw, I found this cigar’s draw to be more to the extreme. This made deriving flavor difficult.

Keeping to the mantra of the Firecracker Series, the Irish Car Bomb Firecracker is one of the bolder candela barber-poles. This was a cigar that was on the upper end of medium from start to finish. There wasn’t much variance in the intensity levels of the smoking experience. Both the strength and body balanced each other nicely with neither attribute overshadowing the other.

The Irish Car Bomb Firecracker was a big surprise to me. I was particularly impressed by the flavor and complexity this cigar delivered.  The Irish Car Bomb Firecracker 3 x 50 format is disappointingly small, but outside some of the tightness from the draw, I enjoyed the smoking experience. The price point of this cigar is $6.00 per cigar – and it’s worth every penny. I would recommend it to any cigar enthusiast and its price point make a bundle worthy of purchase consideration.