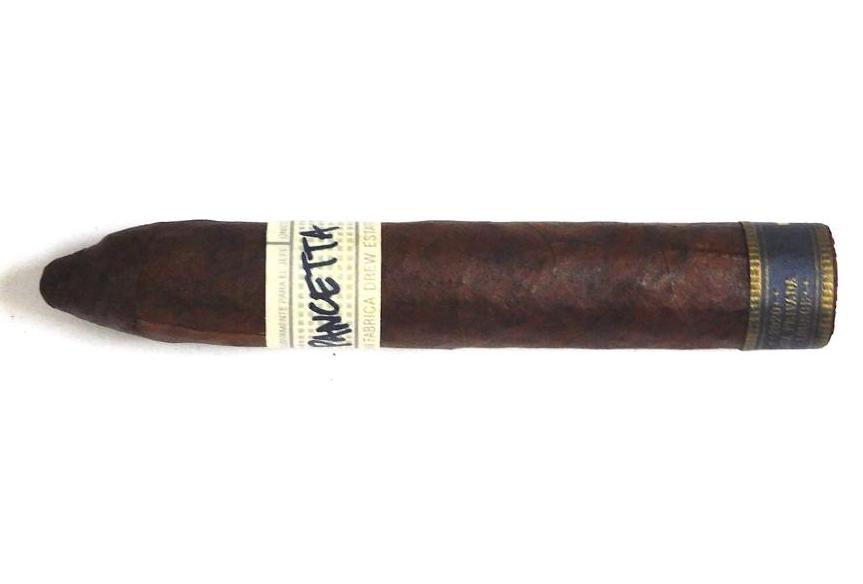 In 2019, Drew Estate announced a new addition to its Liga Privada Unico Serie called Pancetta. This cigar would be an exclusive offering to two retailers in the Mid-Atlantic region: Wooden Indian Tobacco Shop in Havertown, PA, and Barrister Cigars in Union, NJ. These are two retailers that go back to the early days of Drew Estate and are also Drew Estate lounges. The Liga Privada Unico Serie is a series of cigars that feature a unique blend in a different size. All of the cigars in the series are more limited and small batch in production. Some of the releases are even more limited than others.  The cigars are not only limited in terms of production, but in some cases have been regional, shop-exclusive, or evert-only cigars. Many of the Unico Serie cigars have some ties to the Liga Privada No. 9 or Liga Privada T52 in terms of the tobaccos used. Today, we take a closer look at the Pancetta and see what this cigar brings to the table.

The Liga Privada Unico Serie Pancetta was first released in 2019 and it was released again in 2020. The cigar being assessed today is from the 2020 production.

Pancetta is a salt-cured pork belly meat. It sometimes is a meat that is thin sliced either served rolled or flat. I’m not exactly sure what the connection is with cigars. There was another food-themed Unico Serie released called Pork Beli that was an exclusive offering to Hyde Park Cigars.

Without further ado, let’s break down the Liga Privada Unico Serie Pancetta and see what this cigar brings to the table:

Keeping to the one blend, one size theme, the Belicoso measures 4 3/4 x 50. The cigars are presented in 24-count boxes.

The band to the Pancetta is consistent with the Liga Privada Unico Serie bands in the past. On the far right is a blue and gold Unico Serie logo. On the band, the text “PANCETTA” is in a large “handwritten style” text on a gray dotted field. At the top of the band is the text “HECHO EXCLUSIVAMENTE PARA EL JEFE… UNICO SERIE” (which means made exclusively for “El Hefe” – a.k.a. former Drew Estate CEO Steve Saka) in light gray font. On the bottom row is the text “LA GRAN FABRICA DREW ESTATE S.A.” in a light gray font.

One unique thing about the Year of the Rat is it is the first Liga Privada cigar to have a secondary band. This is a footer band that has an “Undercrown Blue” color to it. On the band is the text “20TH ANNIVERSARY FLORIDA PANTHERS STANLEY CUP FINALS” in gold font. There is a gold pinstripe above and below the text.

A straight cut was used to remove the tip of the Liga Privada Unico Serie Pancetta. About half of the tip was removed to allow for the tapering effect to be enjoyed during the cigar experience. Once the tip was removed, it was on to the pre-light draw experience. The cold-draw delivered a mix of coffee, wood, and cream notes. The pre-light draw of the Pancetta delivered a satisfactory experience. At this point, it was time to remove the footer band, toast up the Pancetta and see what the smoking phase would have in store.

The Liga Privada Unico Serie Pancetta started out with more notes of wood and coffee. This was shortly joined by some citrus, mixed pepper, and a slight amount of creaminess in the background. Eventually, the coffee notes took the edge and wood receded into the background. Meanwhile, on the retro-hale, there was an additional layer of red pepper present.

During the second third of the Liga Privada Unico Serie Pancetta, the citrus, wood, and pepper notes slightly increased in intensity.  By the midway point, the wood notes rejoined the coffee in the background. Meanwhile, the citrus and pepper remained close secondary notes with the creaminess now very subtle.

By the last third of the smoke, the pepper notes closed in on the coffee and wood notes in the profile. The citrus notes were still present in the background, but most of the creaminess had now subsided. This is the way the Liga Privada Unico Serie Pancetta came to a close. The resulting nub was soft to the touch and cool in temperature.

While at times the burn line had a slight amount of jaggedness, the burn path of the Liga Privada Unico Serie Pancetta remained relatively straight and did not result in excessive touch-ups. The resulting ash was silver-gray and was skewed toward the firmer side. The burn rate and burn temperature were both ideal. 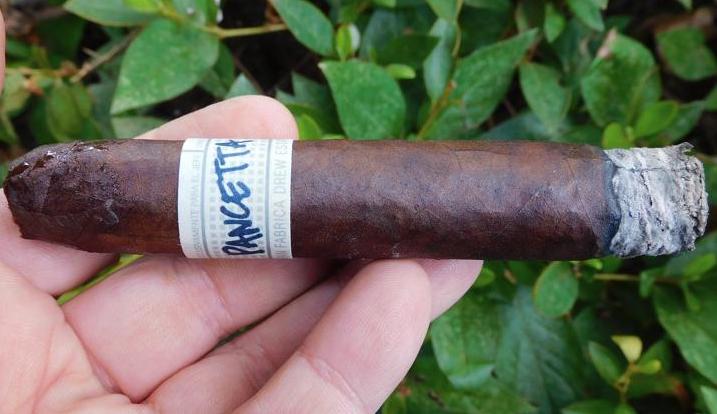 The Liga Privada Unico Serie Pancetta had a slight amount of resistance to its draw. If you have read many of my other assessments, you know this is something that I consider ideal. The area of the tip where the cigar was cut remained relatively firm. At the same time, this is a cigar that was low maintenance to derive flavor from.

When it came to strength, I found the Liga Privada Unico Serie Pancetta to be a medium cigar, however this is a cigar that had some rich flavors to it – resulting in what was a full-bodied smoking experience. There wasn’t much variance in the intensity levels of the strength and body. The body definitely had the edge over the strength throughout the duration of smoking this cigar.

When I saw a mashup of the iconic T52 and Feral Flying Pig blends, I got excited. While the cigar delivered some very good flavor, it did fall short of what I expected for a mashup of the T52 and Feral Flying Pig.  This wasn’t a bad cigar, but it just didn’t deliver the “extraordinary” or “wow” factor I would expect from a Liga Privada Unico Serie. Still, this cigar has its good points. It’s a cigar I would recommend to an experienced cigar enthusiast. It’s not a bad cigar for a novice looking to graduate to a full-bodied smoking experience. In the end, I would still say this cigar had enough going for it to buy – but there probably would be other Unico Serie releases I would reach for first.