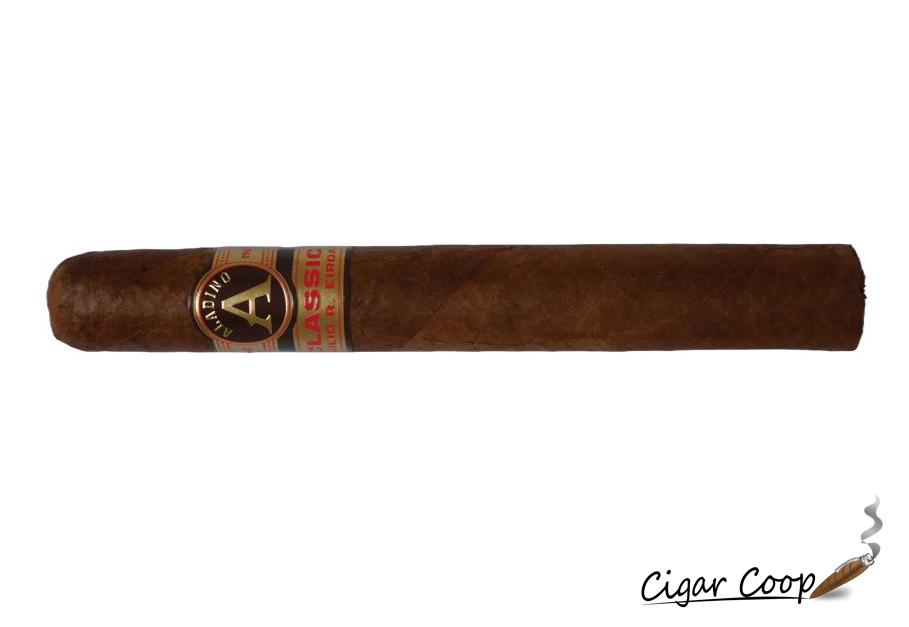 The following are the seven blends that make up the Aladino line.

Aladino is a brand that was created by tobacco legend Julio R. Eiroa. In 2016, he formed JRE Tobacco Co with his son Justo Eiroa. The Aladino name is something traced back to the 1970s. There was a historic movie theater in Danlí, Honduras known as El Cine Aladino. This theater was operated by Justo’s grandfather. It also was the brand name that Julio Eiroa chose for what would become his flagship brand in the portfolio.

Without further ado, let’s break down the Aladino Classic Toro and see what this cigar brings to the table.

The Aladino Classic is not only a 100% Honduran puro, but it features tobaccos exclusively grown on the JRE Tobacco farm. The blend contains a Habano wrapper, Corojo binder, and a combination of Habano and Corojo tobaccos in the filler. Production is handled at Fabrica de Puros Aladino S.A. – the factory owned by Julio R. Eiroa.

The Aladino Classic is offered in four sizes. Each is presented in 20-count boxes

The Honduran Habano wrapper of the Aladino Classic Toro had a medium brown color. There was some oil present on the surface of the wrapper. The wrapper had some visible veins, and there also were some visible wrapper seams.

The band to the Aladino Classic had a brown, gold, and red color scheme. The upper part of the band looked like gold colored pseudo primary band on a brown background. On that upper section is a brown circular field with a gold Aladino “A” on the center. Above the “A” is the text “ALADINO’ – also in gold font. There were some red adornments on the upper portion of the band. The left side of the pseudo band had the text “HONDURAS 1947” in red font. The right side of the pseudo band had the text “1961 HECHO A MANO” – also in red font. The lower part of the band was a gold pseudo secondary band. The text “CLASSIC” and “JULIO R. EIROA” is on this portion of the band. A thin red rectangular frame surrounds the rest of the band.

Prior to lighting up the Aladino Classic Toro, a straight cut was used to remove the cap. After the cap was detached, it was on to the pre-light draw. The cold draw delivered a mix of cedar, earth, and baker’s spice. Overall I found this to be an excellent pre-light draw. At this point it was time to toast up the foot of the Aladino Classic Toro and see what the smoking phase would have in store.

As the smoking experience commenced with the Aladino Classic Toro, there were more notes of classic wood, earth, baker’s spice, and tannin notes. The wood and baker’s spice moved into the forefront early on. The tannin and earth notes settled into the background. The tannin notes never became overpowering throughout the smoking experience and that’s a plus. Meanwhile on the retro-hale, there was an additional layer of woody notes along with a mix of red and black pepper.

The second third of the Aladino Classic Toro saw the earth notes join the baker’s spice in the forefront. For most of the duration of this third, the earthy notes had an underlying creaminess to it. Meanwhile the wood joined the tannin notes in the background. By the midway point, the baker’s spice slightly receded and began to float in and out of the forefront and background. The pepper also began to slightly increase on the tongue.

The final third saw the wood notes make a return and it joined the earth notes in the forefront. The earth notes still had some of the smoothness to them. The baker’s spice, tannin, and pepper notes remained secondary and rounded out the flavor profile. This is the way the Aladino Classic Toro came to a close. The resulting nub was slightly soft to the touch and cool in temperature.

Multiple touch-ups were needed on the Aladino Classic Toro to keep it on a straight burn path and straight burn line. The resulting ash had a gray color. This was an ash skewed toward the firmer side. As for the burn rate and burn temperature, both maintained ideal levels. 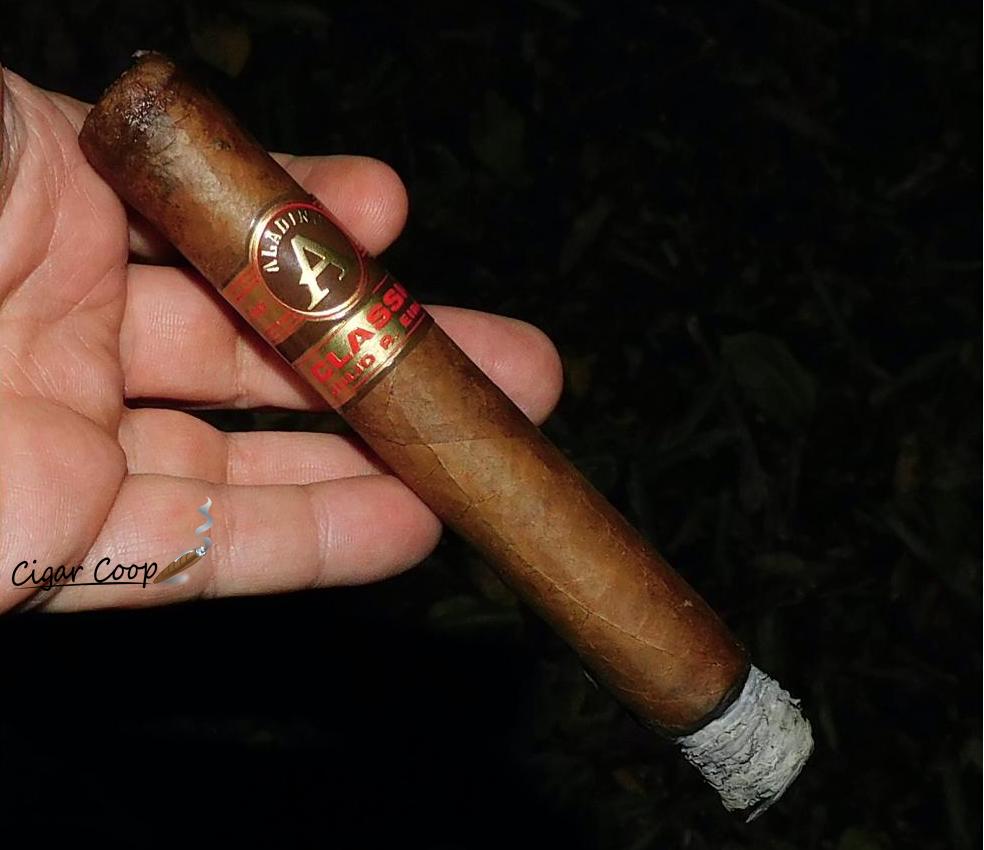 Burn of the Aladino Classic

The draw to the Aladino Classic Toro was on the open side, but this was not a loose draw.  Normally I prefer a little more resistance on the draw, but in the end the openness of the draw had no adverse effects on the smoking experience.

The Aladino Classic Toro started out as a mild to medium strength, medium-bodied cigar. There was a slow and gradual increase in strength. By the midway point, the strength crossed into medium territory where it leveled off for the duration of the smoking experience. The body didn’t change much in intensity and stayed in the medium range from start to finish.

One thing I liked about the Aladino Classic is that it is a softer Habano. This cigar isn’t going to deliver a heavy pepper bite – and that’s completely fine with me. The blend delivered some nice flavor transitions and flavor nuances. Sometimes when I get tannin notes on a cigar, they can become too astringent or bitter – but not the case here. In the end, this is an approachable cigar and in today’s market, at $9.60, it’s an affordable cigar. It’s a cigar I would easily recommend to any cigar enthusiast. As for myself, this is a cigar I would buy and smoke again – and offers a nice change of pace in the Aladino portfolio.